Energy retailers: What do consumers think?

The latest assessment of consumer sentiment shows record levels of satisfaction with energy retailers and a “growing belief that consumers are getting better value for money”. It represents the culmination of a positive trend since 2017.

Improvements in consumer assessments of energy’s value for money and overall satisfaction with their energy retailer ratings emerge from data released by Energy Consumers Australia (ECA). This is the latest in a series of six-monthly surveys undertaken for the ECA by Essential Research that began tracking sentiment in 2016.

There is a steady improvement in the satisfaction trendline since a low point in December 2017 and below we take a closer look.

Prices and the high profile given to increases is likely to have played a part. During the year there has been reporting in the ACT highlighting that electricity prices would increase substantially as a result of the territory’s 100 per cent renewable energy target. There has also been reporting of expected gas price increases.

In terms of cost the latest survey shows that overall 70 per cent of respondents have a positive view of electricity as value for money, this is 13 per cent higher than last year and significantly higher (up 36 per cent) than in December 2017.

The sentiment tracker also considers gas and 72 per cent of households rate that positively in contrast to 68 per cent last year. It is also 21 per cent higher than December 2017.

Consumer assessment of energy’s value for money is shown in Figure 1 below.

And when considered against other similar household service sectors, electricity and gas are comparable with telecommunications (mobile phones and internet), insurance, banking and water in their perceived value for money (see figure 2).

Figure 2: Value for money of all services 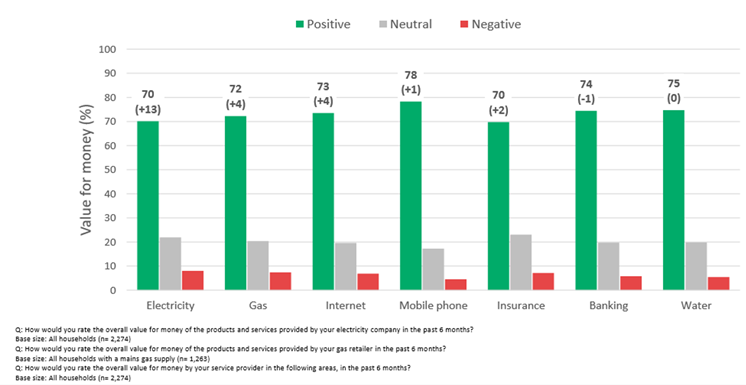 Overall satisfaction with the provision of electricity and gas services has shown marked improvement since December 2017, which is shown in figure 3.

Satisfaction with the overall quality of the service being provided has reached new highs for electricity while it has remained high for gas services, as can be seen below: 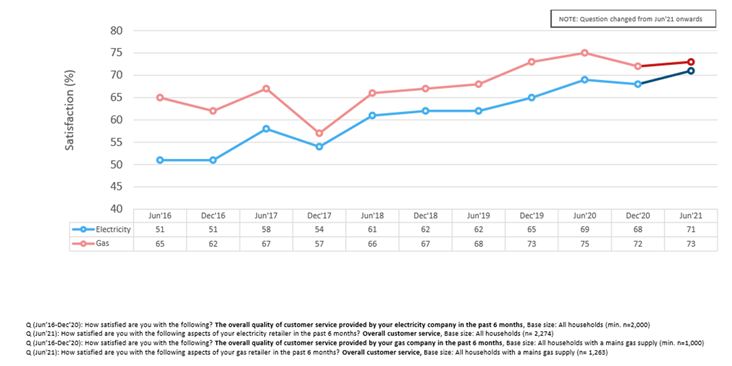 The overall satisfaction by consumer category, energy source and by state is shown in the following two graphs:

Figure 5: Overall satisfaction with electricity services by state and by category 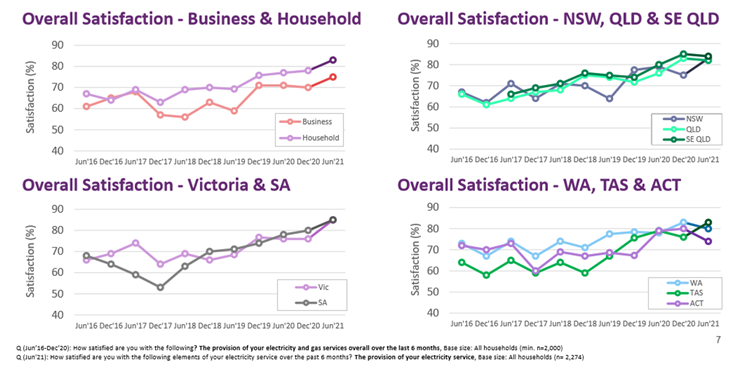 Figure 6: Overall satisfaction with gas services by state and by category 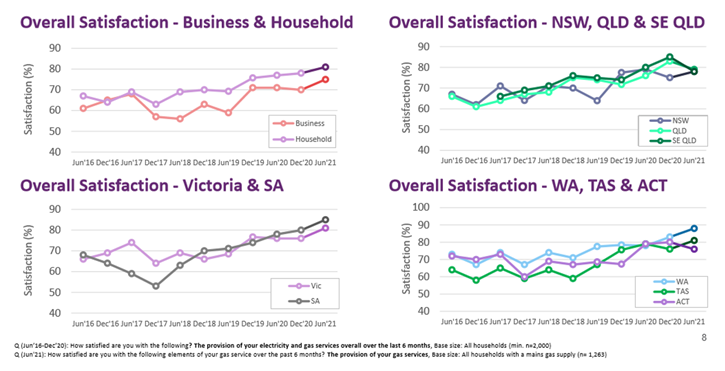 Consumer sentiment towards various aspects of electricity and gas retailers performance, such as overall customer service, information provision, cost and assistance is broken down in the following graphs: 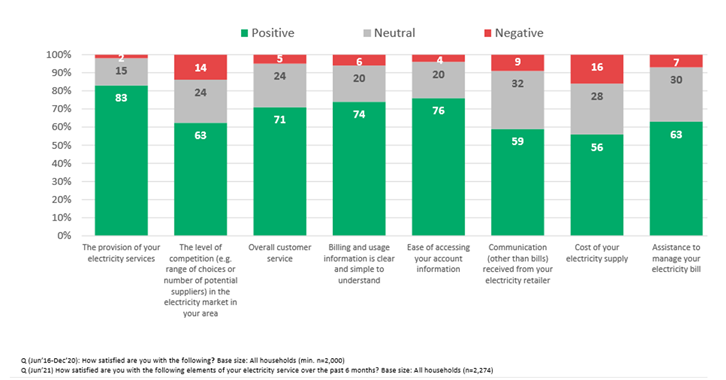 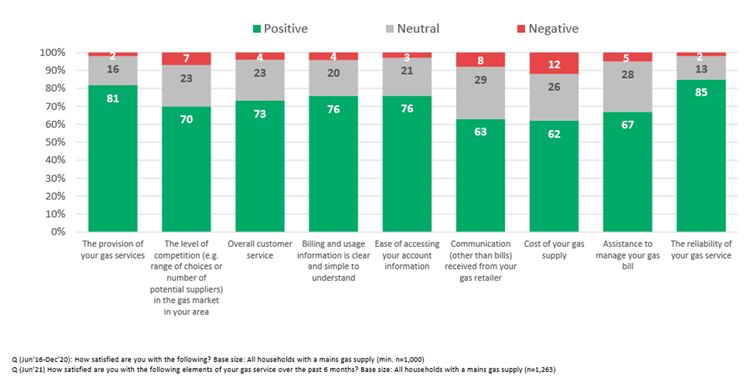 Retailers have been at the forefront of assisting households during the COVID-19 pandemic and have undertaken public campaigns to alert customers to the assistance that is available and to urge them to contact their retailer. The ECA has noted that this work has helped increase consumer trust.

The ECA’s sentiment tracking follows surveys undertaken by Victoria’s Essential Services Commission (ESC) in June, August and October 2020 to monitor consumer sentiment during the coronavirus pandemic and these highlighted improving experiences for Victorian energy users (see New survey shows shifts in consumer sentiment for full details).  In terms of overall satisfaction with their energy provider 62 per cent of respondents in 2020 said they were “satisfied” with only 4 per cent “dissatisfied”.

In other findings the latest ECA research found:

It is worth noting that at the 2017 low point in the ECA’s sentiment tracking series, energy prices had come under extended and extreme political and public scrutiny. In March that year the Federal Treasurer announced an Australian Competition and Consumer Commission (ACCC) review of the retail electricity market, with commentary that electricity retailers had been placed on notice over rising power bills. In September 2017 the ACCC’s Preliminary Report in which it “set out the affordability problem facing Australian residential and business consumers” was released.

In Victoria, the State Government announced it would re-regulate the electricity standing offers as a result of the final report of the Thwaites review of retail energy which was released in August 2017 and recommended a range of measures “to drive down power prices”. And in NSW the Opposition proposed the re-regulation of the electricity market.

Undoubtedly high energy prices – which were the result of a myriad of factors, including various government policies as highlighted in the ACCC’s work – increased scrutiny on all parts of the energy sector. Retailers were then assessed against the negative atmospherics around the industry.

Retailers have been responding to customer demands with changes to the deals they offer, as well as increased transparency and support measures. They have also continued to work with regulators and government on measures to make it easier for consumers to engage with the retail market and find good deals. Efforts to simplify energy price information and comparison to different offers, as well as increased efforts on hardship support for customers, and cost reductions being passed through to consumers are all being reflected in the sentiments of energy consumers.