With colder weather comes an increase in electricity and gas use. New Australian Energy Council data shows that winter electricity bills can be more than $200 higher than in summer, contributing to a significant part of a household’s annual energy costs. But there are a few simple things people can do to save money on winter heating bills.

The AEC is publishing its first analysis of average electricity and gas costs by state and local areas using the latest energy consumption data. It shows seasonal breakdowns of energy use for each major network as well as state by state average gas and electricity costs.

For people living in South Australia, Victoria, New South Wales and the ACT, winter is when their average electricity use increases. It is an easy assumption that more electricity would get used in summer, but while the warmer months may result in higher peak demand days, more electricity is consumed during cold weather.

It is a similar story for gas. Nearly half of all annual gas use in Victoria, Tasmania and the ACT homes occurs during in the winter months. As a result, in Victoria gas bills on average are $336 higher than in summer.

In Tasmania, the increase is even greater with winter gas bills on average $587 higher than in summer. 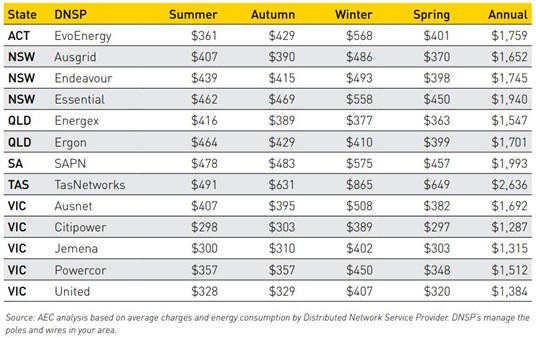 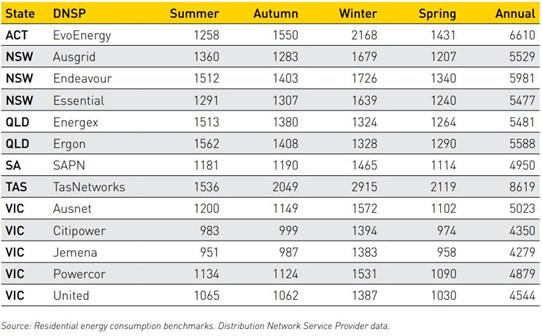 Unsurprisingly, gas consumption is higher in winter given its use in household heating. Nearly half the annual gas use in Victoria, Tasmania and the ACT occurs in winter, in South Australia and New South Wales it accounts for 40 per cent of the total gas bill.

Even in Queensland winter accounts for 35 per cent of annual household gas use. Victoria has the highest average winter consumption (23,435MJ out of a yearly total of 49,779MJ).

While energy prices falling once again is good news for households it is important consumers also realise this is a safety net, and they will be able to save even more by engaging in the market.

This week the Australian Energy Regulator announced its latest Default Market Offer. The price for 727,000 electricity customers on a standing offer will fall by up to $116 for households and $441 for small businesses from 1 July 2021.

The ACCC’s Inquiry into the National Electricity Market September 2020 Report shows residential and Small and Medium Enterprise (SME) customers who have switched to market offers are reaping the benefits of retailers’ efforts to keep prices down (this data included Victorian customers on the Victorian Default Offer).

So, it does pay for consumers to ensure they are on the best deal for their energy use. This also supports a wider message for consumers to consider simple, but effective steps to reduce household energy use. Encouraging people to consider the appliances they are using in addition to the energy ratings of those appliances can also lead to significant savings, for example:

Talk to your retailer

However, the main message industry continues to convey is to reach out for help: If someone is having trouble with their energy bill, or is even anticipating bill stress, having a conversation about it with your retailer will help.

No one will be disconnected if they are talking to their retailer about overdue bills or if they are in a re-payment plan. Retailers have many options to make sure customers are supported, connected and warm this winter. It pays to talk to your retailer.