Which way is the NEM’s energy flowing?

A critical part of the National Electricity Market (NEM) is the six interconnectors that allow electrons to be transported between the states that participate. The NEM began operating in 1998 and was established in response to an Industry Commission report which found that improvements in Australia’s GDP could come, in part, from “the enhancement and extension of the interconnected systems of NSW, ACT, Victoria and South Australia to eventually include, when economically viable, the power systems of Queensland and Tasmania.”[i]

The NEM with its interconnected electricity systems was designed to encourage more competition and help match supply and demand for electrons. The last interconnector to be commissioned was Basslink in 2006 which linked Victoria and Tasmania. Over the years, interconnectors have served their purpose, importing and exporting electricity where required to help meet demand. Regions can be subject to various constraints which can affect the amount of generation available locally and the associated wholesale electricity costs. The challenge is having enough electrons to supply demand at any given time, in any given region. At times of constraints, imported energy from an interconnector can be an important supply of power when local generation is insufficient to meet demand.

Increased penetration of wind in South Australia and the decommissioning of thermal, dispatchable power stations

Figure 1 shows the net imports in each jurisdiction in the NEM over the past six financial years. 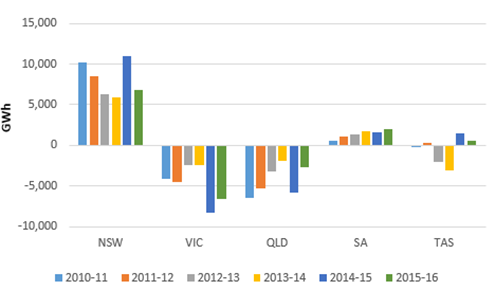 Victoria is the most interconnected state in the NEM, with connections to Tasmania, South Australia and New South Wales. New South Wales is connected to Victoria and Queensland, while Queensland, South Australia and Tasmania are only connected to one region each. Interconnectors will transport electricity from one region to another when there is a price differential between regions.

As each region has different customer loads to cater for, the overall value of net imports can be misleading. To add context to this number, table 1 shows net imports as a percentage of total demand in each financial year. If the numbers are negative, it shows that the state is a net exporter for that financial year, and shows the net exports as a percentage of total demand.

Table 1: Net imports as a percentage of total demand

The impact of the carbon tax on Tasmania’s net imports can be seen in figure 1 and table 1. The increased price placed on baseload generation in Victoria led to Tasmania increasing its exports for 2012-13 and 2013-14 due to the low cost of their surplus generation relative to Victoria. Victoria’s relatively higher cost also led to decreased exports from Victoria and Queensland to New South Wales.

A closer look at South Australia 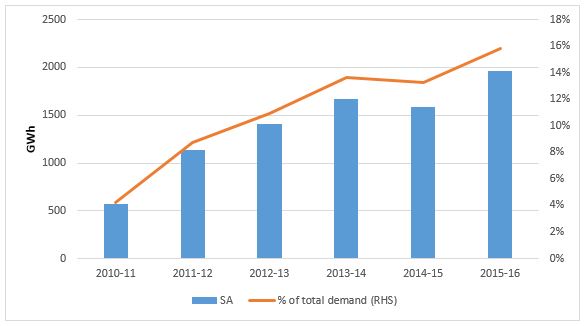 The interconnector plays a major role in system reliability in South Australia, the continued introduction of wind and solar panels has led to the decreased generation from base-load power stations and the eventual closure of the last coal-fired generation in the state. The result is increased reliance on the Heywood interconnector. 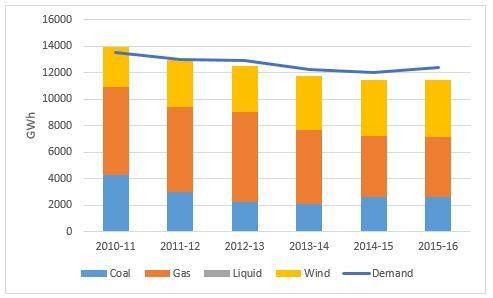 Previous articles focusing on high prices in South Australia and a brief history into how South Australia has come to be in the position it finds itself in currently can be found in the attached hyperlinks.

This situation was not unforeseen. AEMO has started forecasting minimum demand scenarios for South Australia due to the influx of solar PV, and forecast Low Reserve Condition (LRC) due to the continued closure of firm generation assets across the NEM. LRC is the term used when AEMO considers that a region's reserves fall short of what is required to meet the reliability standard

Both of these issues have a different set of problems which have to be dealt with. Minimum demand being met solely by solar results in issues surrounding maintaining power quality, while the LCR breach is a result of decreased firm generation resulting in forecast lack of supply to meet peak demand.

Greater interconnection in the NEM is being considered as a potential solution, but we are yet to see the strength of any business case.

[ii] The Heywood Interconnector: Overview of the upgrade and current status, August 2015