The South Australian electricity market has repeatedly hit the headlines as high prices continue. Everyone has an angle, whether it is blaming renewables, gas prices or bad market design. Amid all the rhetoric, it’s worth recapping what is happening and how we got here.

Well, not quite the beginning, but 5-10 years ago, before the Renewable Energy Target (RET) drove significant wind investment into South Australia the state got most of its power from gas and coal fired generation, with the ability to import and export to its neighbour Victoria. Victoria’s brown coal plants were cheaper to run than SA’s, so imports were more likely. As the RET scaled up, it turned out that South Australian wind was a cost-effective way to meet the target and South Australia received proportionally more investment than other states. Simultaneously, generous subsidies and feed-in tariffs drove a rapid take-up of rooftop PV, with South Australia achieving world-leading penetration levels.

Inevitably, adding more generation to the system - both large and small-scale - had a downward impact on wholesale prices. Admittedly the trends are not especially clear. Below is a chart produced by Pitt and Sherry as part of their analysis into whether wind was the cause of recent wholesale price rises. 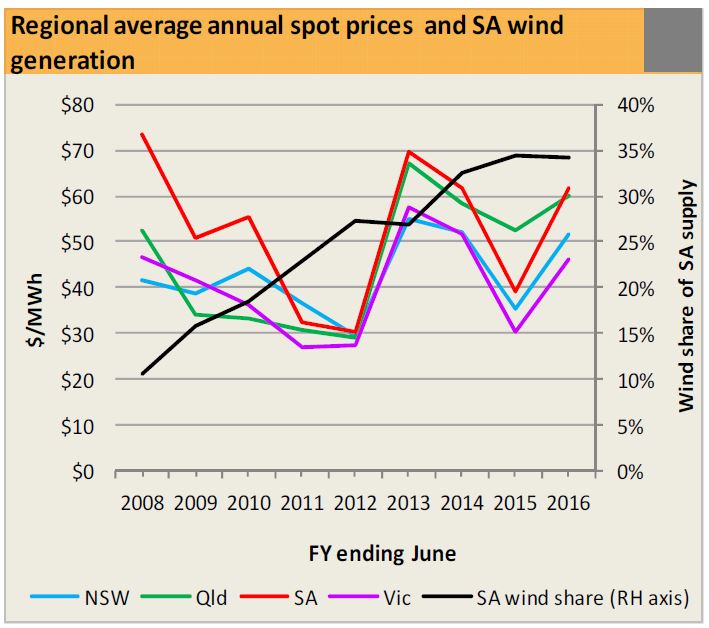 The first year in this chart is an exceptional one. It was a year of severe drought, which constrained the availability of both thermal plant (that relied on water for cooling) and hydro plant. 2012/13 and 2013/14 are higher, too, due to the carbon price that was in force at that time.

But this downward pressure caused by driving more capacity in the system - often known as the “merit order effect” is logically only a temporary one. It puts pressure on the existing non-renewable generators, until they begin to close. South Australia’s four largest generators have all in recent years either closed, announced closure or mothballed part of their capacity. This is not unrelated to the increasing renewable capacity – it is precisely because of the renewable capacity that it is happening. Indeed the point of incentivizing renewables is to reduce emissions, which in turn requires less fossil fuel generation. In the short term this means lower utilization of existing plants, but ultimately it will result in closures.

Accordingly, the Clean Energy Council’s claim that “the reasons for South Australia’s high power prices compared to the rest of the country remain the same as they were before a single wind turbine or solar panel was installed”[ii] miss the mark. Something has changed – there is now less dispatchable capacity than before, and this is in large part due to the impact of renewables on the market. So there is a rebalancing of generation away from thermal (i.e. coal and gas powered plant) and towards renewable plant. Crucially, though this is not a like-for-like replacement.

Thermal plant does more than provide energy to the market. It also provides a range of services to maintain the stability and security of the grid. These ancillary services allow the market operator to “fine tune” frequency levels across the system. They also provide (for free), inertia. Inertia, as defined by the Australian Energy Market Operator (AEMO), is ‘produced by synchronous generators’ which ‘dampens the impact of changes in power system frequency’[iii]. Inertia effectively stabilises power systems, allowing the system to cope with rapid changes in frequency due to significant changes in either supply or load, delivering a more stable system overall. Finally, they provide system restart services that allow the system to restart after a major blackout.

In general, wind and solar do not offer these services to the market. Over time, ways may be uncovered that allow them to do so, but even then this will only be when their resources are available. The Heywood interconnector with Victoria can provide some of these ancillary services, but this further increases South Australia’s dependence on the interconnector. Some of the highest prices for both energy and ancillary services in recent months has been when the interconnector has been unavailable.

The other key difference is, of course, that intermittent generation is only available to run at certain times, whereas the thermal generation it has displaced is able to run more or less continuously. Logically this means that the rebalancing will lead to more volatility in prices. When the wind/sun are available and able to meet a substantial proportion of overall demand, prices will be low. Conversely, when they are not, and especially if demand is high or the interconnector is unavailable, prices will be higher than before, because there is less dispatchable supply capacity. We have analyzed the prices and supply of renewables by half hour of each day across a recent six week period: 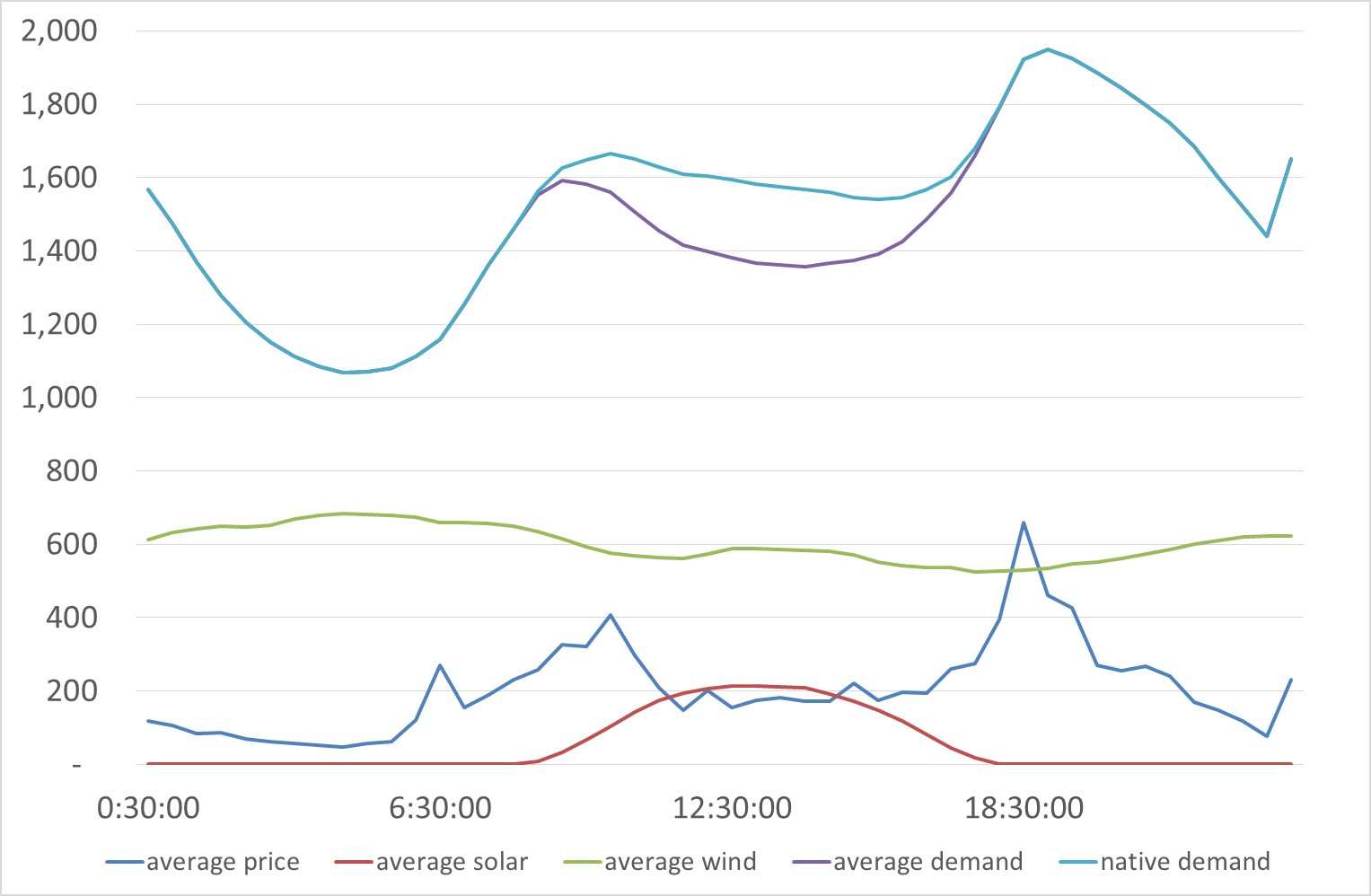 Native demand in the graph above is inclusive of estimated solar output. It can be seen that solar shaves the morning peak a little, but not the higher evening peak. Prices are highest at this point, with a smaller spike for the morning peak. While wind appears, on average to supply fairly consistently, this average is misleading. Across the six weeks for any given hour there were days when wind supplied very little. Indeed, The Australian noted that there were times when aggregate wind production was negative – i.e. the wind farms were net consumers of energy[iv]. This is not as odd as it sounds – all generators have ancillary loads behind their meter (operational buildings, etc.) and wind turbines use motors to rotate the turbines to seek the best wind resource. Overall, this rebalancing unwinds the merit order effect. These price differentials are illustrated below, for Victoria, as well as South Australia.

Figure 3: Wind and the spot price[v] 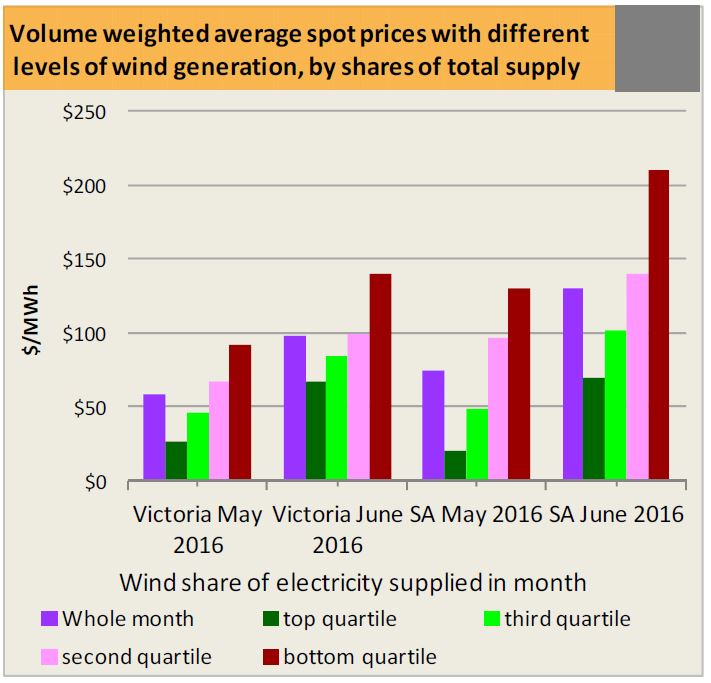 Pitt and Sherry conclude that therefore wind is not the cause of high prices. It is true, indeed unsurprising that wind is not a direct cause – i.e. that high prices do not usually occur when wind generation is running. It is the overall rebalancing of the generation mix that is the underlying cause, with proximate factors such as interconnector outages and high gas prices contributing.

Roughly speaking, we can separate the recent high prices by these two. The underlying rebalancing was reflected in a rapid ramp up in contract prices for 2016 onwards. This began last year when the accelerated closure of the Port Augusta power stations was announced, and prices have since hovered around the $80-90/MWh level. These contracts are used by retailers and large users to manage the risk of high prices. But the impact of gas price spikes and interconnector outages meant that prices have exceeded this level in recent weeks.

Retailers, or large users, that fully hedged their loads would not be exposed to these prices. However, the Australian Wind Alliance claimed that large users who complained about these price spikes only had themselves to blame: ”Companies that are large users of electricity should be negotiating long-term fixed price contracts for their business. This is the solution to this problem, not blaming wind and solar[vi]”. While the Alliance has a point, it should be noted that wind farms, unlike dispatchable generators, are not well-placed to offer these fixed contracts, given that they are exposed to the risk of a high spot price when they are not running. Over time, new contracting strategies may emerge where contracts can be offered off the back of a mix of wind, solar and gas.

What’s next for South Australia?

Unfortunately, there is no single low-cost silver bullet to all these challenges. While greater interconnection to other National Electricity Market states has been mooted, this is a potentially expensive investment with some risk of stranding if the generation mix in the state on the other side of the interconnector changed rapidly, or if the claimed distributed energy revolution did materialise. Greater interconnection may play a role, but it is unlikely to be the whole story.

Restrictions on specific technologies, such as the proposal by the SA Opposition to require AEMO to confirm that a new wind farm would not have an adverse effect on the market are not welcome either. Rather, renewables policy needs a redesign so that any incentives to build renewables are aligned to the value they provide to the market. This means that the investors will make the call as to whether they can earn their money back and what the risks are, rather than have it second-guessed by AEMO or another party. Exposing investors to these (normal commercial) risks may mean that the renewables rollout does not proceed as quickly as some would like, but it will allow us to keep an eye on the other two sides of the energy trilemma – cost and reliability.

[vi] “Renewables not to blame for the surge in electricity prices in South Australian”, Australian wind alliance media release, 15/7/16