The highs of VWA prices

In the past two quarters the Volume Weighted Average (VWA) prices across the National Electricity Market (NEM) have shown a substantial increase, with the outcome for quarter two described as “truly remarkable”[i]. So what is driving this shift in VWA prices? There appear to be a range of factors - from interconnector outages, plant closures, increased industrial demand and decreased reliability – playing varying roles in different regions of the NEM over the first half of 2016.

Figure 1 shows the quarterly VWA prices in the NEM since 1 July 2014. 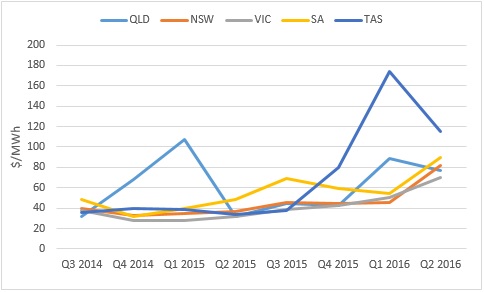 The largest price rise is seen in Tasmania. The increase in price is due to the extended Basslink interconnector outage and the coincidental depleted dam levels which restricted the availability of hydro generation. In response, Tasmania introduced diesel-fired generators, which were brought to Tasmania from the mainland, and reinstated the Tamar Valley combined cycle gas turbine.  During this time, other measures taken included the reduction of industrial load from large users such as Bell Bay aluminium. Figures 2 and 3 show imports for Tasmania and Victoria for the 2015-16 financial year, which highlight the impact of Tasmania’s energy situation during this period. 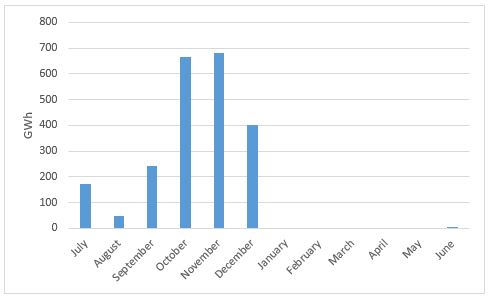 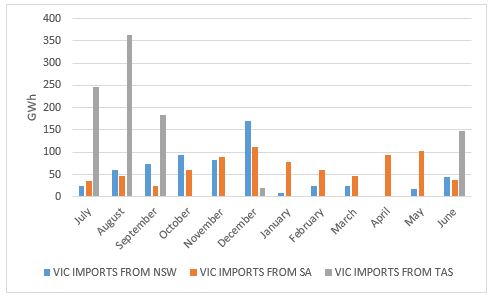 In June, Basslink came back online. Interestingly, Tasmania exported 246 GWh and imported 161 MWh for the month. The exports followed increased rainfall during May and June led to an increase in overall dam storage levels. The increased storage levels led to smaller dams generating at maximum capacity to minimise the amount of spilling and waste of rainfall inflows. The associated surplus electricity generation was exported to Victoria[ii].

The announced closure of Northern power station led to increased wholesale prices in South Australia and, to a lesser extent, Victoria. The market for future contracts is extensive and ranges in types of contracts (baseload, peak, cap) and timing of contracts (quarters, calendar year, financial year, month). For simplicity, Figure 4 shows the change across the NEM for calendar year 2017 future baseload prices since July 2015. 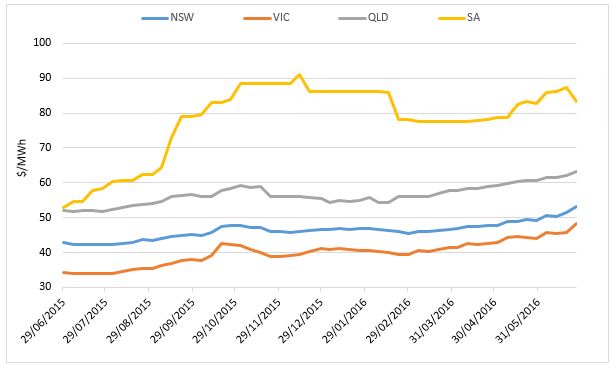 The recent high prices in South Australia are expected to continue in the future with the change in the state’s energy mix. Spot prices act as a signal for generators, where the price paid to all generators is the price of the highest bidding generator which is dispatched in the market. As the majority of energy is contracted before the transaction takes place, spot prices do not represent the profit of a generator. Instead they indicate the marginal cost of the most expensive generator being turned on. Prolonged high prices act as a signal for new entrants to enter the market.

What is causing the discrepancy between baseload and spot market prices?

A cold winter and the commissioning of the 5th LNG train in Queensland are factors contributing to the increase in gas prices in Sydney, Adelaide and Queensland. Prices in Sydney reached above $20/GJ for the majority of last week. To put this into perspective, the average ex post price in Sydney for 2015 was $4.10/GJ. Figure 5 shows the 30 day moving average ex post price in the aforementioned regions since January 2015. 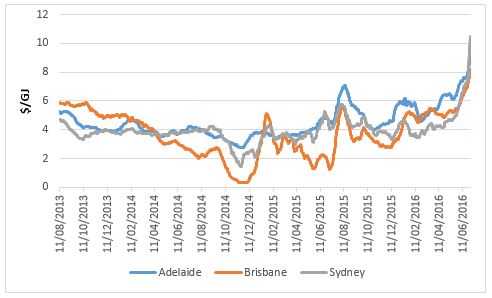 The new high reached for the 30 day average gas price is an indication that supply is very tight. Continued high prices would encourage increased exploration for natural gas. However, while moratoriums and restrictions are still in place for unconventional gas sources in some jurisdictions across Australia, it is hard to see where new gas reserves will be found. This is likely to have a direct effect on gas-fired generation and spot prices across the NEM for the foreseeable future.