Below we take a look at some highlights from the report.

For the first time, the 10% probability of exceedance (POE) peak demand is forecast to fall. This refers to the grid demand, i.e. net of behind the meter rooftop photovoltaic (PV) generation.  The 10% POE is the demand level that is expected to be exceeded only once every 10 years and is often taken as something of a benchmark that a highly reliable power system is expected to supply. Since the 1990s, WA's 10 per cent POE demand has grown strongly due to:

This is both because the drivers of growth described above have eased in WA, and because the rapid take up of PV continues to trim the peak demand which historically occurred mid-afternoon on a hot weekday. This trimming is already pushing back the time of peak net demand close to sunset, so the effect is diminishing.

From 2024-25 capacity year, this time shifting causes the effect of PV growth on peak demand to saturate, but the 10% POE peak demand is forecast to flatten rather than grow again, this is helped by other distributed energy resources (DER) coming into play, such as batteries, which will act to trim the peak after sunset. 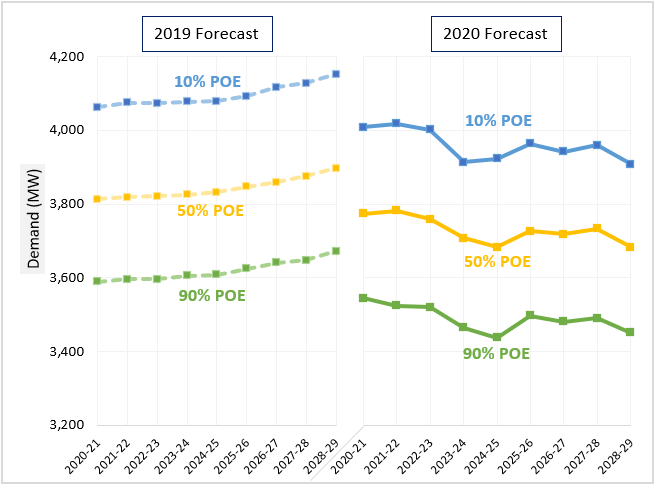 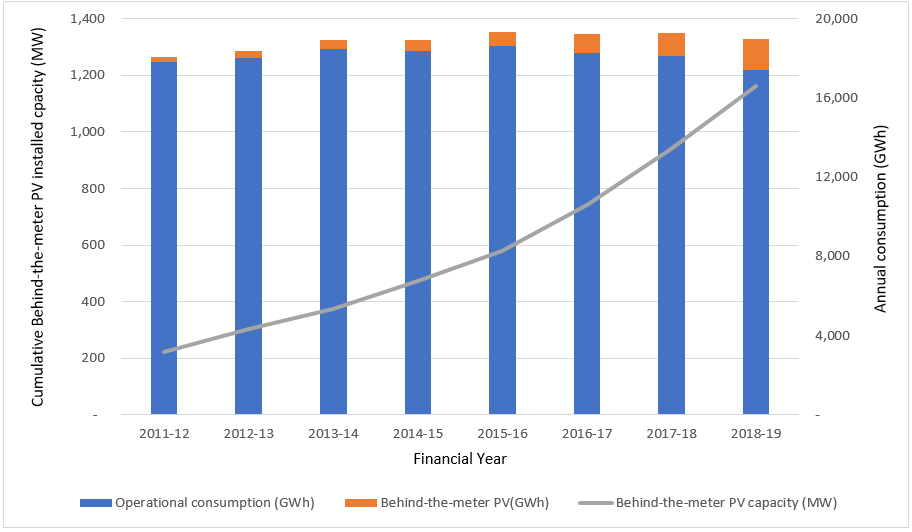 Though the behind-the-meter installed capacity is “larger than Muja CD (the largest power station in the SWIS)” which has a total capacity of 854MW, they have quite different production characteristics. A 1GW dispersed installation of rooftop PV with a 15 per cent load factor will provide the same yearly energy output as a 215MW coal-fired plant of 70 per cent load factor. Muja CD’s FY2018-19 annual generation is 3,755GWh while rooftop PV generated 1,537GWh of electricity (854MW compares to 1,164MW). This is why the share of PV’s energy in the graph above (orange) has been unimpressive compared to its share of WA’s capacity (grey line).

Unlike the energy-only National Electricity Market (NEM) where generators recover their capacity costs through energy-price volatility and selling hedge contracts, the Western Australian Wholesale Electricity Market (WEM) has a centrally managed Reserve Capacity Mechanism (RCM). Large-scale generators are issued ‘capacity credits’ for the generation capacity they can provide to the market at peak times. In other words, generators are paid to exist throughout the year in case they are needed for peak demand.

As a result of this, energy price volatility is not considered necessary, and generators are restricted in the prices they may bid in by the energy market by the maximum Short Term Energy Market price which was discussed in a recent EnergyInsider[ii]. 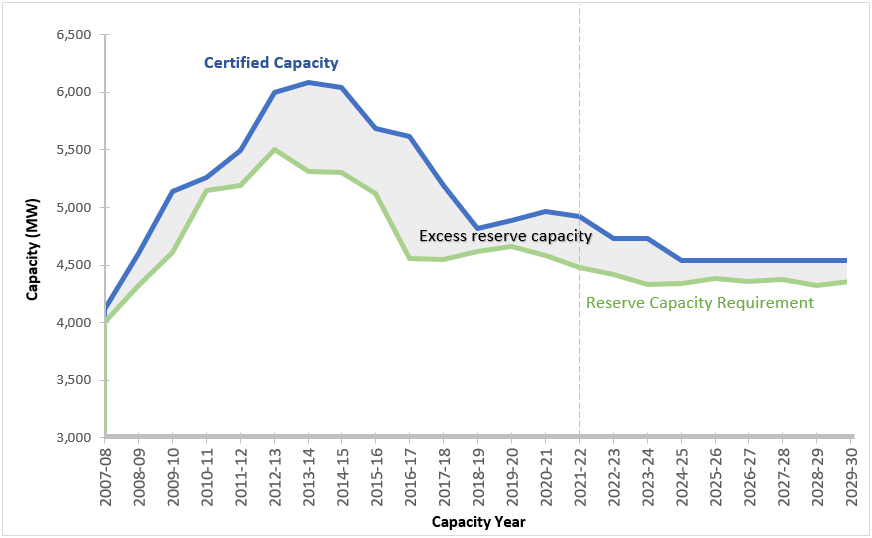 Historically, the RCM shared a fixed amount of money across all eligible providers in proportion to the amount of capacity they were deemed as bringing to the peak demand. This could include, for example, gas-fired peaking generation, that might be deemed to have full capacity, demand-side interruption, or large-scale renewables who would be deemed at a lower level due to their intermittency.

The total amount of deemed capacity is shown in the blue line of figure 3. The green line is the amount of reliable capacity that AEMO has specified as necessary to meet 10% POE demand forecast plus a reserve margin to cover the loss of the largest conventional large generating unit. The optimal outcome is when these two lines match.

In the middle of the last decade the RCM appeared to over-signal the value of capacity and an inefficient excess of supply emerged (see figure 3). Since then significant changes were applied to the RCM that reduced the amount paid to demand-side (and tightened eligibility) and subsequently a sloping payment curve is being introduced such that during future surpluses new capacity will receive lower RCM payments.

In the 2017-18 RCM year, when the demand-side RCM changes were introduced, demand-side’s share of the RCM reduced by 425MW. The following year Synergy’s supply fell by 380MW as surplus generation was closed[iii]. As such, the surplus capacity dropped from 23.3 per cent to 4.3 per cent in 2018-19. In September 2019, a total of 4,925MW of Capacity Credits was assigned to meet the Reserve Capacity Requirement (RCR) of 4,482MW for the 2019 Reserve Capacity Cycle in relation to the 2021-22 Capacity Year, representing a 9.9 per cent excess capacity level, much closer to optimum.

PV is growing at such a rate for the WEM, that managing peak demand is becoming less of a challenge than managing minimum net grid demand.

Prior to 2017-18, daily minimum demand occurred during overnight or early morning periods when residential and commercial energy use was typically low. In the most recent three years, all record daily minimums have occurred during daytime hours that corresponded with periods of high behind-the-meter PV generation. The most recent minimum demand on 4 January 2020 is the lowest observed at 1,138MW. It is estimated an 896MW of PV generation had displaced the underlying demand. This is actually a slower rate of decline of minimum demand than has already happened in South Australia and was discussed in a recent EnergyInsider[iv], however the challenges for WA are more acute due to the lack of interconnection to other regions that can absorb the surplus and provide support. 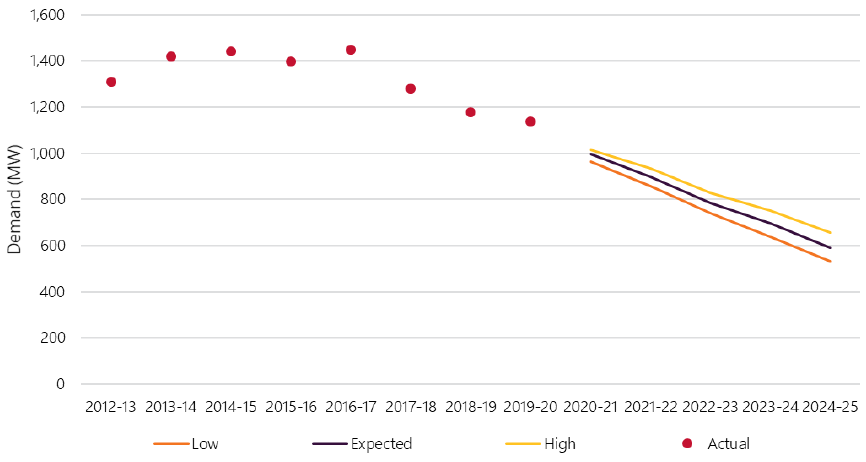 Minimum demand forecasts have been included in the 2020 WEM ESOO for the first time. Across different cases, the report forecasts a five-year annual average decline rate from 10.3 per cent to 13.8 per cent.

As WA sees increasing levels of non-traditional generators coming online, keeping the power system secure and reliable becomes a great concern to operators for this stand-alone market. Initiatives that reduce behind-the-meter PV generation or increase demand during times of reduced load, or the introduction of synchronous condensers (investments in reactors, storage such as batteries, voltage and frequency control equipment, dynamic under frequency load shedding) will be critical to maintain power system security.

[i] 2020 Electricity Statement of Opportunities - A report for the Wholesale Electricity Market, AEMO June 2020