The latest assessment of the implications of South Australia’s successful uptake of renewables, and rooftop solar PV in particular, reads like a thriller with plenty of twists[i].

The recurring theme is how management of the major influx of rooftop solar PV is now a pressing issue, according to a new assessment produced by the Australian Energy Market Operator (AEMO) for the South Australian Government.

It is not entirely alone – WA is facing similar challenges which were highlighted in its Distributed Energy Resources (DER) Roadmap (see DER: Does WA’s roadmap set the right direction?) which reflected the fact that WA’s South West Interconnected System (SWIS) has been undergoing rapid change and shifting from a traditional, centrally managed power system, to a system with increasing intermittent capacity particularly as a result of the take-up of solar PV.

Rooftop solar installations are growing rapidly – more than 200MW a year is being installed in the state, consistent with the highest projected DER scenarios. As of 2019-20,  it is estimated distributed PV has a record generation of 1,600 GWh. This accounts for 12 per cent of the underlying demand in the state. 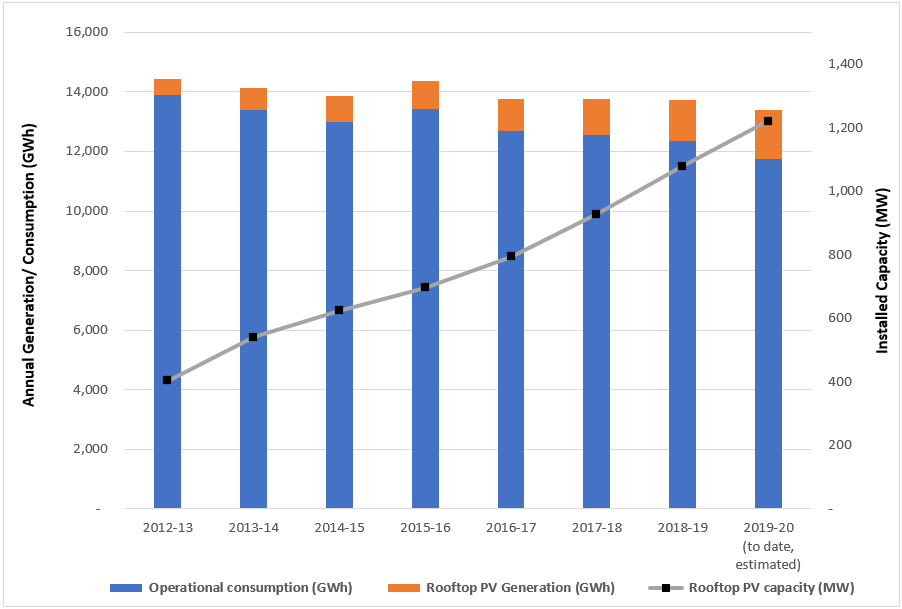 Figure 2: Actual and projected capacity of distributed PV in SA 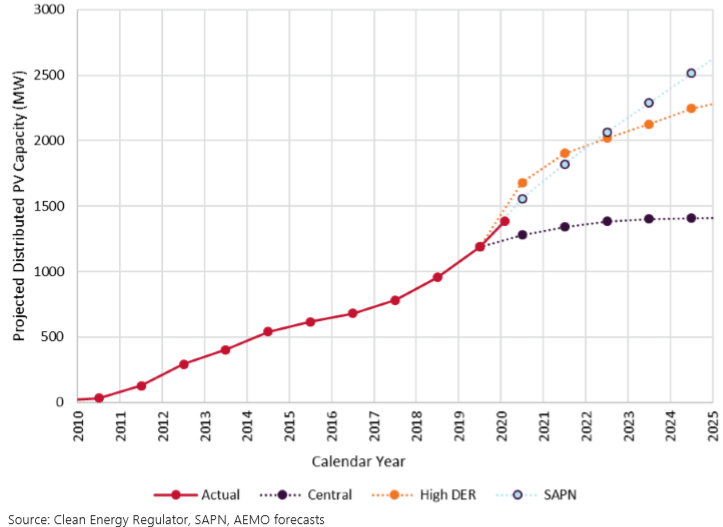 The take-up is closely following AEMO’s highest previous forecasts, and while the virtues of more solar are well known, the implications are only now becoming increasingly visible. SA remains at the forefront of the accidental experiment resulting from a rapid influx of renewables.

The SA experiment is managing what is considered a global first – the first gigawatt scale power system to approach zero operational demand due to a high proportion of demand being met by DER[ii].

Under high DER scenario, operational demand could reach zero within a short timeframe  (one-to-three years, see figures 3 and 4), according to the latest assessment. Operational demand is the underlying demand less the demand met by rooftop solar. It is the demand usually met by traditional dispatchable power station, as well as large-scale renewables.

As more homes put solar on their rooftops it is effectively operating akin to a substantial, but uncontrolled, power plant. AEMO notes that while all large-scale generation is controllable, with the growth in its significance there now needs to be more control over distributed energy resources (DER).  At the moment, AEMO cannot “see” the PV output from household solar. 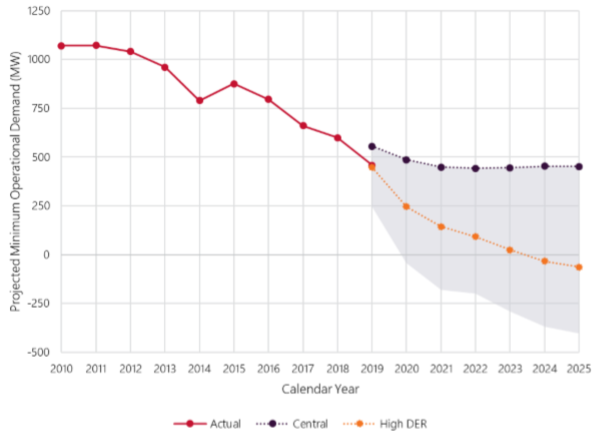 Figure 4 below shows the impact on operational demand from the increasing amounts of rooftop solar generation with the biggest impact evident in the middle of the day and typically on sunny low demand days such as weekends or public holidays[iii]. 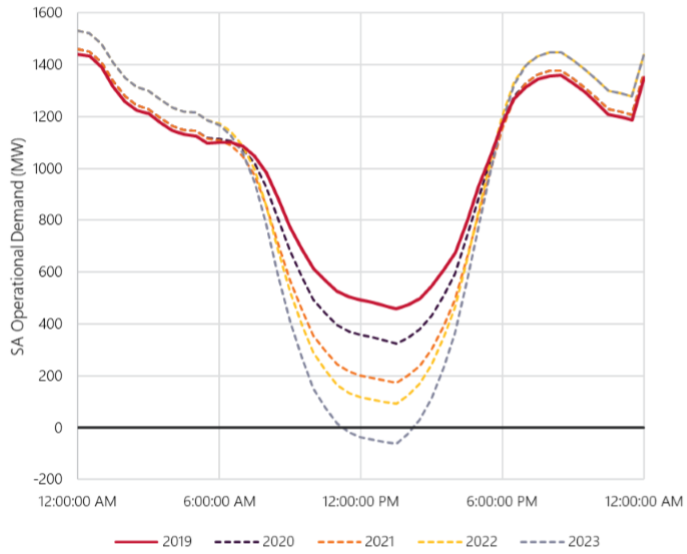 The obvious issue when there is no operational demand, is that the dispatchable power stations won’t be running. While it may be good from an emissions perspective, this means the additional and essential system services delivered by these plants, like frequency and voltage management of the grid, need to be sourced from elsewhere.

Voltage disturbances in turn can lead to some PV systems tripping. AEMO says there is now “considerable evidence” that this is the case and that, based on its analysis, a severe but credible fault on the system near the Adelaide metro area could lead to up to half of the rooftop solar in the SA region tripping off simultaneously. Additionally, it has flagged an issue with some existing solar system inverters which, based on recent power system disturbances, means that 30-40 per cent of these inverters are not performing as specified in existing standards.

It means that SA is at risk of rapidly losing an estimated 100-300MW of solar generation and that figure could be reaching 200-400MW by as early as the end of this year based on high growth projections.

To maintain system security and reduce the risk of the Heywood interconnector tripping on overload following one of these solar events, imports of power from Victoria will have to be limited at times.

SA is connected to Victoria and the NEM via the Heywood interconnector as well as the smaller Murraylink interconnector. The Heywood link is a critical element in maintaining system frequency and helps balance variances in demand and supply. Without the link, SA is “islanded” and needs to be able to manage all the system security and frequency services alone[iv].

When it operates in isolation from the rest of the NEM, SA needs to have enough demand for the minimum output of synchronous generators that can deliver the appropriate amounts of system strength, inertia, frequency control and voltage management.

AEMO warns that when SA operates as an island “it is now almost impossible to maintain the frequency operating standard for certain credible fault events”. That in turn means that the market operator might not be able to operate a separated SA grid securely at times of high PV generation.

And those system security risks can be expected to grow rapidly as more PV comes into the grid (assuming no steps are taken to deal with it).

The proposed actions to address

AEMO suggests the threshold level of operational demand needed during islanding will be 550MW – that’s with two new synchronous condensers in place late this year. That level will reduce by around 100MW from late 2021 when there will be another two synchronous condensers in place.[v] A shortfall in SA’s system strength was declared by AEMO in 2017, while a shortfall in inertia was declared at the end of 2018l[vi].

Fortunately islanding is only a rare condition – such as the three week period after towers collapsed in Victoria in January. However it will be challenging to manage when it happens again: the state has already experienced operational demand as low as 458MW and AEMO expects this to reduce further by this coming spring. To deal with the risks the market operator believes there is an urgent need for a backstop that would allow it to curtail rooftop PV in “extreme and unusual” circumstances.

Given the concern and public pressure this could lead to from those who have invested in solar systems, the market operator stresses that this would be a last resort mechanism to manage system security in exceptional circumstances. So, the amount of lost solar generation would in fact be relatively very small over time.

AEMO needs “demand recovery reserves”, which means the ability to quickly reduce the amount of rooftop PV in the system or increase load.  It estimates that an ambitious 200-500MW is needed by this spring and that could grow to around 1000MW by spring 2024, if distributed PV continues to grow at its current pace.

Increasing load at the levels required in the timeline faced is not deemed to be technically feasible, although it notes that ultimately large quantities of flexible customer response might be feasible with the right frameworks.

Other measures could be the use of battery storage and virtual power plants (VPPs) to absorb some of the excess electricity generated by solar PV for use at other times. The scale of what would be required is an issue – the existing Hornsdale Power Reserve (better known as the big battery) has a 100MW capacity with a one hour duration and total construction costs were $90 million – AEMO estimates that more than 10 times this amount would be needed to meet the volumes needed in SA in the time required.

The market operator sees PV shedding capabilities as the most suitable back-stop measures because it can be done at low cost, and achieve the volume of response needed with impacts on customers expected to be low based on it being used “very rarely”.

It also claims that establishing generation shedding capabilities as a back stop could complement ongoing development of battery storage and VPPs and moves to establish two-way markets and dynamic load response: although the linkage to this is not entirely clear.

AEMO flags the importance of additional interconnection and has recommended that the 800MW EnergyConnect (linking SA to NSW) should proceed. Meanwhile, prior to spring this year, it has introduced constraints on the Heywood interconnector to limit imports during high solar PV output with the aim of protecting the interconnector and reducing the risk of SA becoming islanded.

The market operator recommends PV shedding capabilities be introduced as rapidly as possible for all new PV installed in the state, along with a new performance test for voltage ride through as a condition of connection for all new distributed PV inverters installed.

These are among 31 recommended measures: see tables 9 and 10.

In response, the SA Government has announced support for the introduction of new smart solar standards ahead of any national changes to ensure solar systems can be managed “like any other generator when needed to support energy security”. It will also underwrite a $10 million investment in voltage management by SA Power Networks.

[v] ElectraNet is installing the four synchronous condensers which operate in a similar way to generators.