Last week Western Australia released a Distributed Energy Resources (DER) Roadmap that seeks to set out a framework to allow the further development and integration of DER into the South West Interconnected System[i] (SWIS - region shown below) over the next five years. 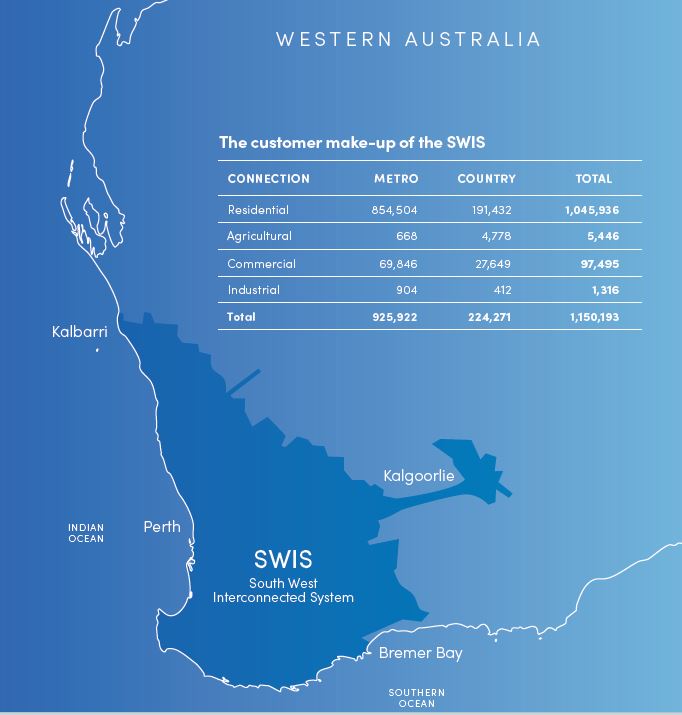 The Roadmap stems from the work of WA’s Energy Transformation Taskforce that was established by the State’s Energy Minister in May 2019. That taskforce was asked to complete its work by May next year with the roadmap being its first major deliverable. Below we take a look at the issues highlighted by the taskforce and some of its suggested actions to address them.

The challenge of change

The Roadmap identifies 36 actions and developed an implementation plan which are available here. The steps recommended range from technology integration, removing barriers to DER participation (including battery storage), piloting alternative electricity tariffs to encourage further development and participation of DER in the SWIS, increasing visibility of DER and creation of new regulatory bodies to oversee the operation of a DER market.

The roadmap reflects the fact that WA’s SWIS has been undergoing rapid change and shifting from the traditional, centrally managed power system dominated by large-scale thermal generators to a system with increased intermittent capacity, particularly from the take-up of solar PV and an increasingly decentralised supply chain with newer technologies like batteries and electric vehicles emerging.

Almost a third of all home rooftops now have solar PV installed with an estimated 2000 households adding a system each month. There is more than 1100MW of solar PV installed – making it the largest single source of generation in the SWIS.  Solar PV represents an output capacity three times the size of the largest dispatchable generator, the 340MW Collie Power Station[ii].  Figure 1 shows the amount of installed coal-fired generation and rooftop solar capacity, while figure 2 shows the comparison of WA’s solar PV to other Australian jurisdictions. 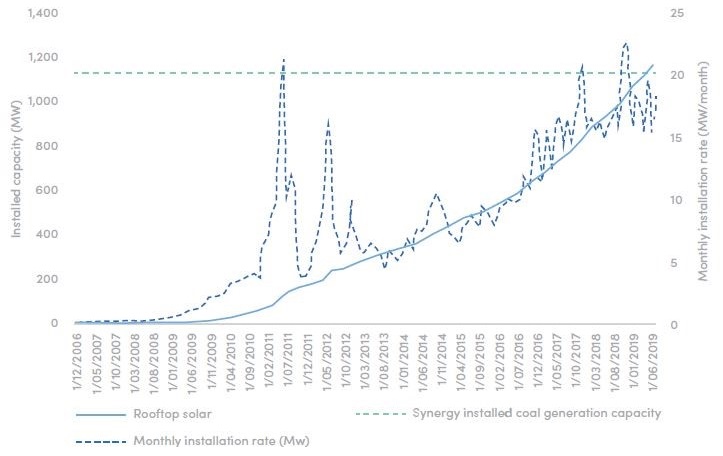 Figure 2: Percentage of dwellings with a solar PV system by jurisdiction 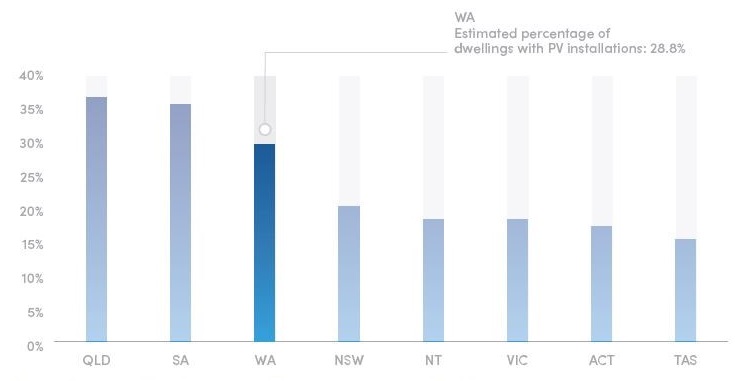 The scale of solar PV in the SWIS sees daytime demand fall, with the Australian Energy Market Operator (AEMO) forecasting significant risk to the stability of the grid by 2022[iii].  This is more pronounced during mild, sunny days when residential solar PV kicks in during the middle of the day before there is a sharp ramp up in demand late in the afternoon as solar generation falls away and consumers return home after work (figure 4).

Figure 3: AEMO analysis on the shape of the load curve on minimum demand days 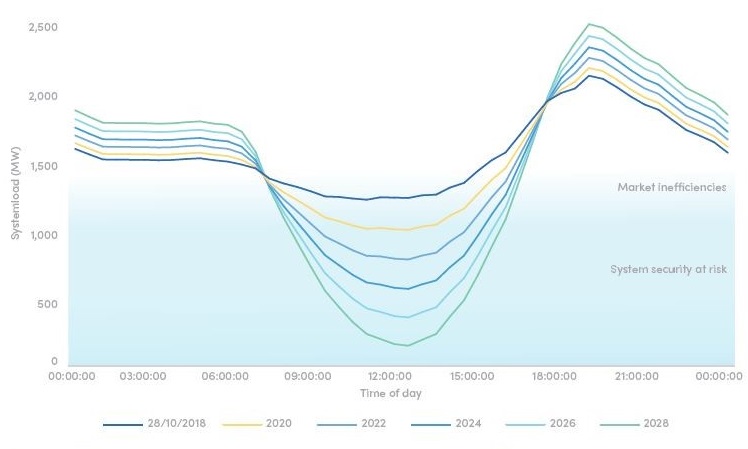 This high penetration of rooftop solar, whilst not necessarily higher than some other states, is particularly challenging for the SWIS as it is an isolated system and cannot share sudden variations with other states. And unlike Queensland, the solar is highly geographically concentrated, in Perth, and therefore more exposed to sudden weather change.

The amount of solar PV in the system is having a considerable impact on the overall supply-demand balance and is creating issues with power fluctuations. There are increasing instances where sudden, sharp increases or decreases in solar PV generation – such as on 18 October 2018 when it increased more than 300MW in just 35 minutes – has forced AEMO to engage in more frequent and costly interventions to maintain system security. 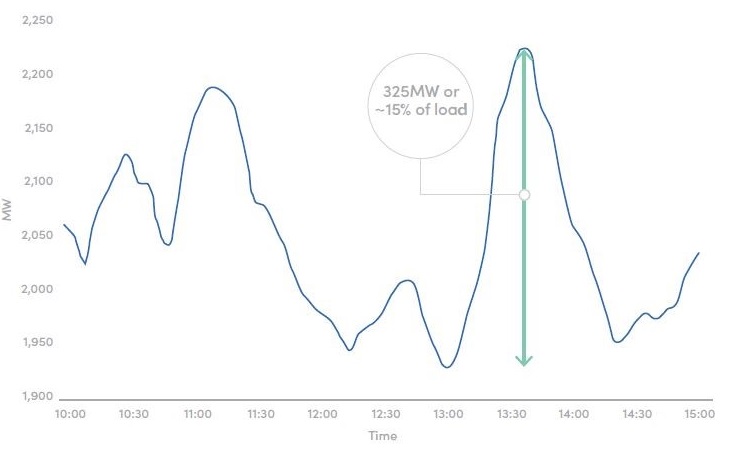 One way that the Taskforce proposes to overcome the system security and stability issues is through the deployment of distributed battery storage.

Distributed storage isn’t entirely new in WA and, in fact, there are some great examples of community batteries that allow customers to access a shared storage resource as an alternative to investing in their own battery. This is meant to be a win-win scenario: households reduce their up-front costs while operators can leverage the battery for load shifting, among other things.

The Alkimos Community Battery, for example, is a retailer-led project with the equipment owned by Synergy. Customers take up a time-of-use tariff and pay a monthly fee to export an unlimited amount of excess solar to the battery during the day and draw back on it between 4pm and midnight.

More of these community-based batteries will inevitably be rolled-out over time but the Roadmap points to “near-term system security risks” and a high priority action item is for Western Power to deploy community PowerBanks by December 2020 to address network constraints in Canning Vale, Dunsborough, Ellenbrook, Kalgoorlie, Leda, Parmelia, Port Kennedy, Singleton, Two Rocks, and Wanneroo.

There’s good reason for this action to be undertaken and Western Power may be best to deliver these PowerBanks in a compressed timeframe. However, many in the energy sector will be looking at this closely to see what rules or code of conduct Western Power operate these PowerBanks under. And then there’s the practical implications: if these PowerBanks are shifting a significant load to the peak period, will other participants be able to justify a business case for investing in a battery storage project? This action item could well create a cyclical problem, with the State Government regularly being forced into short-term emergency measures, if these PowerBanks reduce the viability for other participants to enter and compete in this space.

The roll-out of PowerBanks may represent a short-term solution but a more fundamental change highlighted in the Roadmap is using tariffs to shift demand and better allocate costs.

The existing flat tariff structure, where a fixed rate is paid no matter the time of the day, does nothing to encourage customers to change their consumption patterns. Households have no incentive to shift their demand to the middle of the day – when there might be a lot of rooftop solar generating and excess supply – to reduce network and system costs, and this is contributing to the morning and evening demand peaks.

The Roadmap also hints at better empowering households and businesses to respond to changes in supply/demand by saying, “customers are not provided with an appropriate signal as to the value of energy generated by their DER relative to that consumed from the grid.” It’s extraordinarily difficult for customers to identify peak times on any given day, and a ‘signal’ of high demand and the associated costs to service that peak would help to shift consumption.

But DER also creates equity issues. Customers with DER contribute less than their share of fixed system costs and “disproportionately” benefit from lower bills compared to those who are unable to install DER – such as those in rental accommodation, and high rise buildings or those who are simply unable to afford DER – who cross-subsidise those who can install systems.

The Taskforce has recommended a trial of tariff structures to tackle this and to encourage efficient use and investment in DER. It is seeking to implement tariff pilots beginning in July this year, with a progress and insight review expected later in the year.

Make DER an active participant in the energy system

The Roadmap also envisages a bigger role for market participants such as retailers and aggregators capable of developing portfolios of DER market support services built around contracts with DER owners.

The aim is to have customers provide services that support the system and are rewarded for doing so. The Roadmap comments that the development of mechanisms that allow DER to provide these services and receive payment will open up new value streams for customers, and lower system costs

Other key actions outlined by the Roadmap include establishing:

A Distribution System Operator, or DSO, with visibility of power flows and DER on the network, will be required to manage the network within technical limits, identify when network issues emerge and act to manage these issues. To do this, the DSO will need to see the flow of power across the distribution network in real time.

A Distributed Market Operator (DMO) which would:

The Roadmap targets 1 July 2023 for the DSO and DMO to go live in the SWIS, following identification of legislation and regulatory framework requirements by the end of this year.

WA’s DER Roadmap is a sensible plan to harness the benefits of new power delivery technologies. While solar technology has been adopted nationally, there is no doubt that WA is now at the leading edge of the transition, so this roadmap is timely to ensure the system can stay reliable and secure.

WA’s Roadmap places considerable emphasis on the roles of market operators and regulated businesses in the delivery of its objectives. This is understandable given the scope and expertise required, however competition in services should be an objective. Competition is the best enabler of innovative customer-centric products that will optimise the use of distributed energy. Competition is also best to offset the risks in evolving markets.

Sending appropriate and clear pricing signals will help drive further innovation and development of DER-related services.  Even though it would be economically rational that the costs of congestion created by exporters should be borne by them and not by others, to date tariff structure pilots that seek to embed this principle have found little enthusiasm from either exporters or politicians. Whilst we support the involvement of retailers in the tariff pilots recommended by the Roadmap (action items 8 and 9) and clear price signals are required, the creation of secondary markets to value products such as frequency or voltage control outside the traditional scope of tariff reform at a customer level may prove more fertile ground.

[i] The SWIS is the electricity grid covering the most populous areas of WA. It covers the southwest region and extends to Kalbarri in the north and Kalgoorlie to the east.