Setting the mark: Why price limits should change in WA

Alongside the lofty energy reforms being rolled out in Western Australia the annual review of the energy price limits has quietly captured the attention of market participants and industry watchers.

Such low price caps are standard for energy and capacity market designs like the WEM, where the value of capacity is rewarded via the separate capacity market. By contrast, energy-only markets like the NEM recover this value through the energy market, so they need a much higher cap in order to signal a need for additional reliability through occasional price spikes.

The latest review was noticeable for throwing up questions about the gas price modelling used, and requiring a re-calculation based on the shifting price outlook for distillate due to the impact of the COVID-19 pandemic.

Ultimately, the Australian Energy Market Operator’s (AEMO) just completed annual review of the energy price limits and the proposed prices will have significant consequences for participants in the WEM. We take a look below.

How does the energy price limit work?

The Maximum STEM Price and Alternative Maximum STEM Price are based on the estimate of the short run marginal cost of the highest cost generating facility in the South West Interconnected System (SWIS) fuelled by natural gas and distillate respectively. To determine the short run marginal cost of highest cost generator, the following factors are taken into account: variable operating and maintenance costs, the heat rate, fuel cost, the loss factor at its connection location, and a risk margin.

AEMO typically engages an independent consultant – this year they appointed Marsden Jacob Associates – to review the upper price limits and the report is then sent to the WA Economic Regulation Authority (ERA) for review and approval.

The first step in conducting the 2020/21 review is selecting the generators to be the basis for the upper energy price limits.

The WEM Rules note that the generators used to set the Maximum STEM Price and Alternative Maximum STEM Price must be 40MW open cycle gas turbine units. So, based on this requirement, the generator units selected were the 6 x Pinjar 40 MW gas turbine units located on the outskirts of Perth and the aero-derivative units at the Parkeston Power Station, which is in the Goldfields Region. These were the same generator units used in the 2019-20 review.

After obtaining data for the Pinjar and Parkeston units, Marsden Jacob Associates undertook simulations to develop the distributions of the variable costs, including:

With the distributions determined, Marsden Jacob Associates performed a Monte Carlo simulation which involved sampling at random from input probability distributions of the variable O&M, fuel cost and heat rate. Marsden Jacob Associates undertook 10,000 iterations of the model to generate the probability distribution of possible Maximum STEM Price outcomes. The risk margin was determined as the difference between the mean and the 80th percentile.

Pinjar had the highest maximum and alternative maximum prices so those units were used to determine the energy price limits.

These upper energy price limits compared favourably to the prices since 2012. 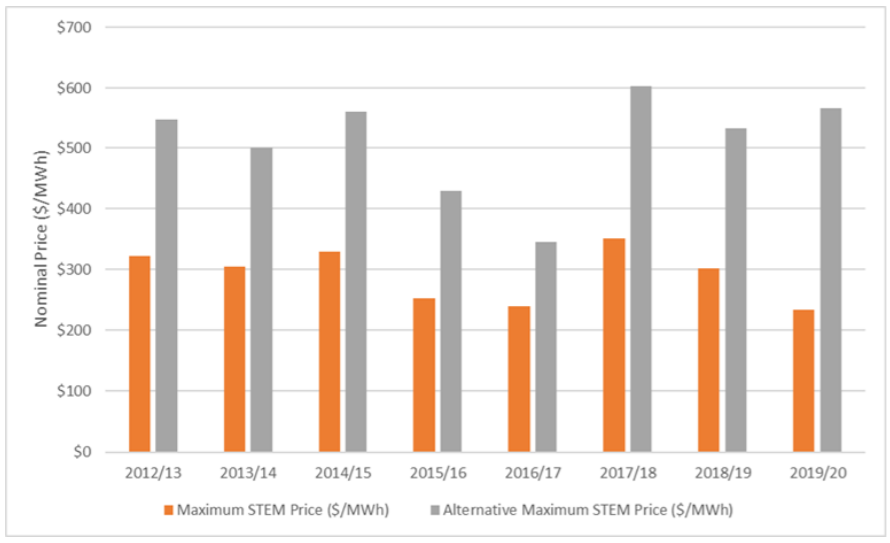 But just as everyone started to digest this information, AEMO announced that Marsden Jacob Associates would re-calculate the energy price limits to account for the impacts of COVID-19. In particular, they claimed that the distillate price outlook substantially reduced between the release of the first draft report in March and their decision to revise the report in early May 2020. The gas price, however, would remain unchanged from the first draft report which had already incorporated a low gas price outlook reflecting their view that LNG is oversupplied.

The review of the draft report saw the liquid fuel price drop a staggering $201.69/MWh resulting in the Alternative Maximum STEM Price collapsing to $379.69/MWh.

Figure 2: Change in the Alternative Maximum STEM Price from 2019-20 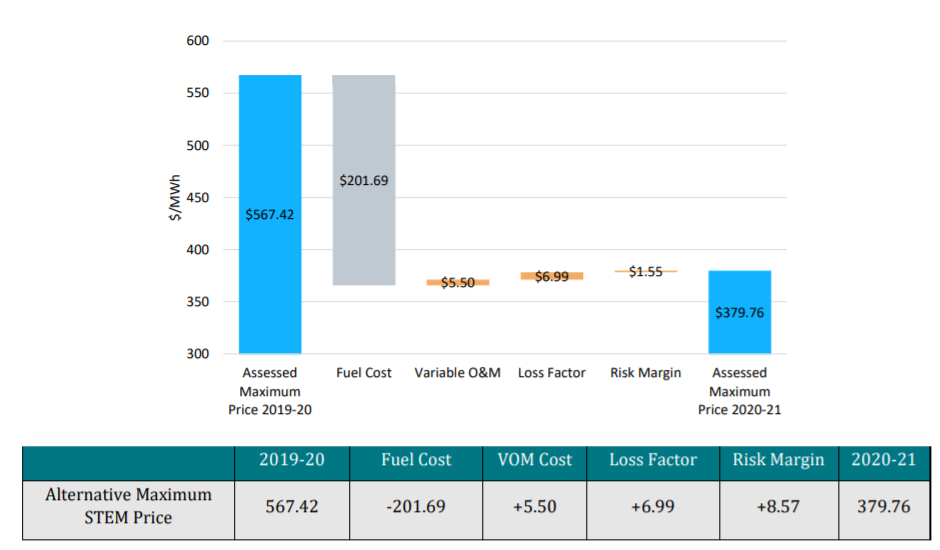 Despite the substantial drop in the Alternative Maximum STEM price, it’s debatable whether the methodology for calculating both the gas price was correct in the first place.

To determine the gas price, Marsden Jacobs Associates used the average of the past year maximum gas prices to provide an estimate of the expected value for the coming year. This put the mean gas price just below $3/GJ.

This approach to calculating the gas fuel prices assumes that generators in the WEM can easily buy fuel on the spot market. As the report notes:

It should also be pointed out that most gas is traded informally between the major gas buyers and sellers in Western Australia. There is a high concentration of both major buyers and sellers which implies that each party can simply enter into bilateral spot transactions on a daily, weekly or monthly basis[i].

In reality, of course, generators have fixed gas supply agreements at much higher historic prices. And, irrespective of that, AEMO is nudging generators towards having fixed supply agreements with its own draft Market Procedure: Certification of Reserve Capacity where it states that “AEMO considers that a fuel supply or fuel transportation (including gas pipeline capacity) quantity of less than 90% firm may (depending on the volume) indicate a restriction on fuel availability that could prevent the Facility operating at its full capacity”, potentially lowering the facility’s capacity and reducing its capacity payments[ii].

If the modelling was to reflect the gas prices actually paid by generators, then the Maximum STEM Price would be noticeably higher and more indicative of actual costs.

The annual review of the energy price limits in the WEM tends to fly under the radar. But the value of the upper price limits has an enormous impact on generators and their ability to recover operating costs. This is particularly important at a time when some participants are also getting squeezed on the retail side following the devastating impact of COVID-19 on the Australian economy.

What’s especially noteworthy about the energy price limits review is the disconnect between the gas price assumption used in the modelling and the reality faced by generators. Interestingly, the ERA advised on 18 May 2020 that its review of the methods used to calculate the energy price limits has been suspended given the overlap of work being undertaken through the Energy Transformation Strategy and following correspondence from the Minister for Energy[iii] This may be an unfortunate turn of events given the impact that compressed upper price limits will have on market participants in the WEM.

Capacity and energy market arrangements like the WEM require many economic parameters that must be frequently reset by a regulator, such as the STEM caps. These resets are necessarily always controversial, with each decision having major impacts on investors and consumers. It is a fraught task for a regulator to estimate any parameters that attempt to ascribe a single value to an input (in this case gas price), when the real market has a great many ways of obtaining its inputs.

New Access Code: What does it mean for competition?