BP recently released its latest Technology Outlook[i], which examines the potential of 130 energy technologies to change the way we produce and use energy through to 2050 and points to what it considers to be “game changers”.

The Outlook states that society now faces a “dual challenge”: we need to meet an increasing demand for energy (with a key driver being developing nations), while reducing greenhouse gas emissions. BP believes that technology will have an increasing part to play in resolving this challenge, and its latest ‘techno-economic’ analysis aims to map-out a potential direction for change.

BP’s previous Technology Outlook was released in 2015, and within three years the energy sector has experienced advances in technology, and lower costs for battery storage, solar and wind.

[ii]The analysis does not attempt to predict future ‘break-through’ innovations, nor does it take into account government policy[iii].

BP explores the following five areas where it thinks technology could be a “game-changer” in lowering emissions over the next three decades:

1. Improvements in energy efficiency - The use of higher performance technologies has the potential to save up to 40 per cent - or 217 exajoules (EJ) - of current global primary energy use.

The analysis examines global energy use across 35 technologies - from cars and power plants to domestic cooking and washing – to assess the best available technology today and in 2050. It found that the greatest potential for energy savings by increasing vehicle efficiency, improving building designs, and improving the use of energy in heating, cooking and washing, as well as power plants (Figure 2).

If the maximum practical savings were made, there would be demand declines in coal (31 per cent), oil (47 per cent), natural gas (40 per cent) and biomass (40 per cent), as well as an annual saving of 13.5 gigatonnes of carbon dioxide emissions. 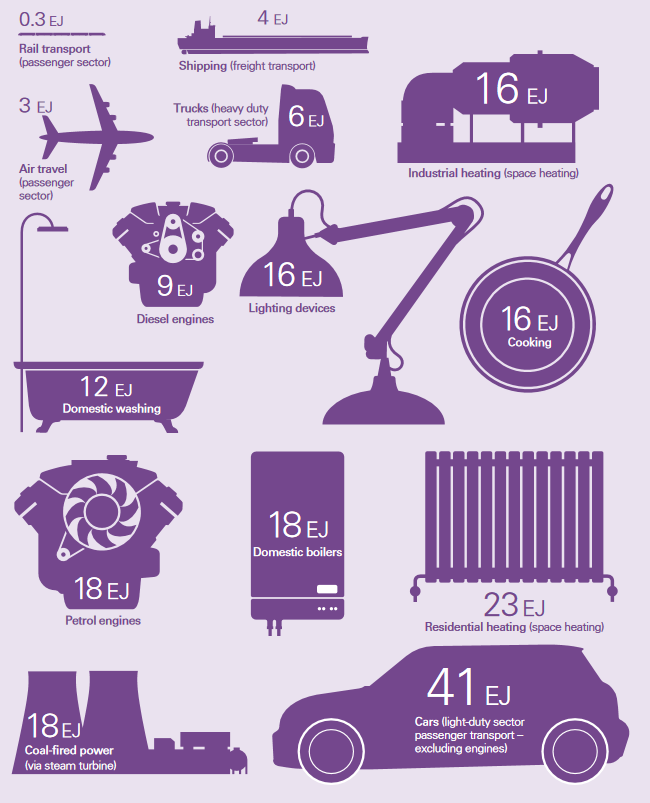 * Larger images represent greater potential energy savings. Potential annual energy savings are shown in EJ. One EJ is approximately equal to the average annual energy consumption of 26 million homes in North America. The total savings were calculated by tracking the energy savings back to primary energy – the volumes of oil, gas, coal, biomass, renewables and nuclear energy that would not need to be used.

2. Digitisation - including sensors, supercomputing, data analytics, robotics and artificial intelligence, supported by networked computers – is expected to be the most significant driver of system-wide efficiency improvement.

BP believe that digitisation is the “fourth industrial revolution” and could achieve “new types and levels of energy efficiency” – influencing smart grids and demand management, to self-driving vehicles and ride sharing. According to the report digitisation could reduce primary energy demand and costs by 20-30 per cent by 2050.

It notes that while the “full power” of digitisation is currently unknown, it is expected to have a profound impact on the energy sector especially as artificial intelligence evolves.

3. Renewable power – solar and wind power has grown steadily, driven by a combination of advances in technology, falling costs, and policy support.

This trend is predicted to accelerate significantly, with onshore wind anticipated to be the most cost-effective source of electricity by 2050. Grid-scale solar is predicted to become increasingly competitive, while hydropower, now a mature technology, is expected to have incremental developments.

With a high proportion of grid demand provided by renewable energy, the Outlook notes that high integration costs and intermittency issues will need to be resolved (Figure 3). According to the report, if wind and solar power account for more than 40 per cent of total electricity generated, considerable costs are projected to manage their intermittency. 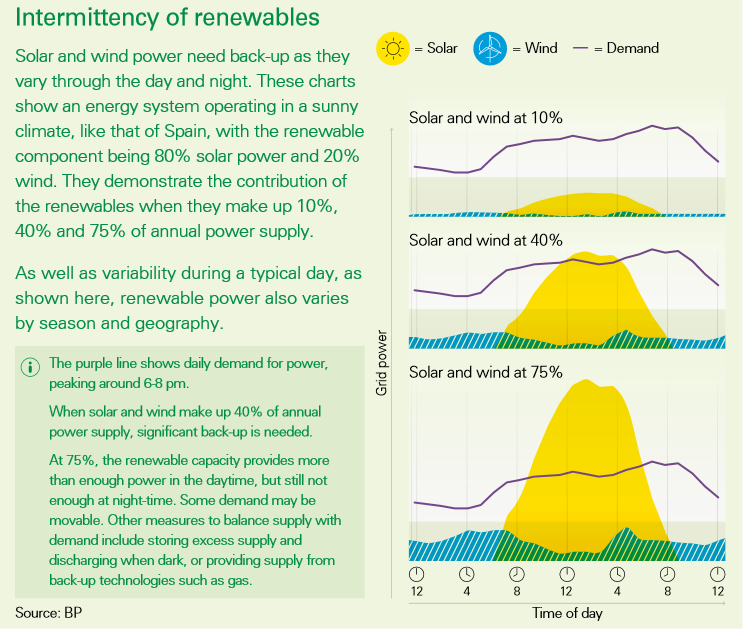 Grid-scale batteries offer options for storing electricity in power systems. Lead-acid batteries have been the most cost-effective for grid-scale storage, but by 2050, other competitive options may include compressed air energy storage and lithium-ion, metal-air, solid-state and flow batteries.

Transportation is expected to experience a “transformation” off the back of battery advancements. Rapid developments in lithium-ion batteries could make electric vehicles (EV) more cost effective (liquefied natural gas is expected to become a competitive fuel for heavy duty trucks).

EV batteries are expected to fall to a quarter of today’s costs by 2050: “In our analysis, the costs of buying, running and fuelling electric and hybrid cars in Europe fall to become competitive with those of internal combustion energy-driven models before 2050,” BP says. However the Outlook notes there are still some “uncertainties” in relation to battery costs, distances driven and vehicle charging (we have looked at this area in a previous article and the progress of commercial electrified fleets was also examined here.)

5. Decarbonised gas – including carbon capture, use and storage (CCUS), synthetic gas, bio-gas and hydrogen - is listed as a “game changer” because it will play an important role in balancing the grid, meeting the most cost-effective energy mix, and helping to resolve the “dual challenge” dilemma.

BP does not expect decarbonised gas to mirror the same strong growth of renewable energy or digitisation, but notes that “without such deployment of gas with CCUS, a future low-carbon system would be more expensive”.

A transition is underway

Coal remains the largest source of energy across the globe, however BP notes that “a major transition is underway.”

Figure 4: The changing world of power 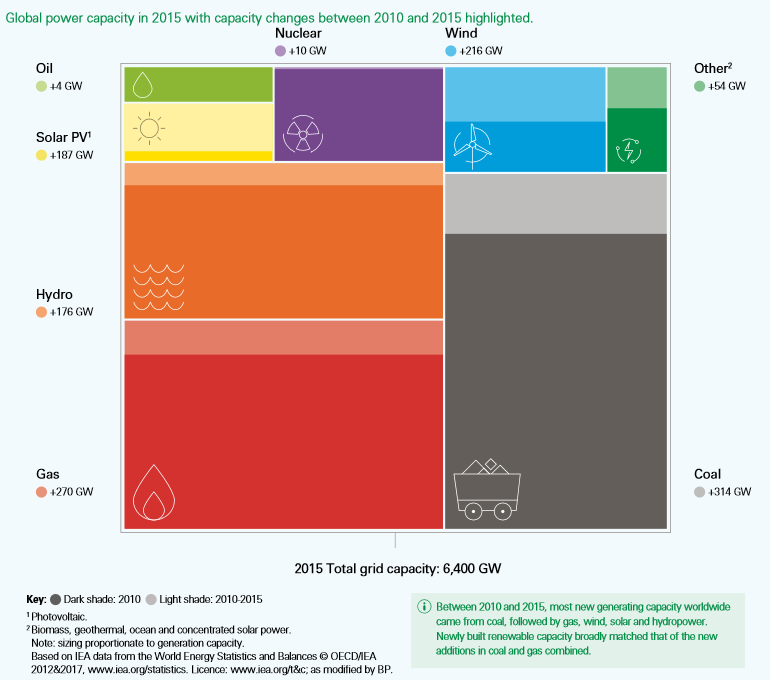 Between 2015 and 2050, modelling shows that the mix of technologies for power generation in each region could change. Coal is expected to remain a significant power source but is predicted to plateau, as renewables rapidly grow and gas expands.

The falling cost of renewable energy is “transforming the global energy system at unprecedented speed.” Wind and solar power are anticipated to grow rapidly and become a major source of electricity across the globe by 2050. Since 2010, the cost of generating electricity from solar PV has fallen by 73 per cent while onshore wind has experienced a 23 per cent decline.

“This falling cost trajectory promises to fundamentally reshape the global energy landscape,” Adnan Z. Amin, Director-General of the International Renewable Energy Agency, says in the report. “Our belief is that by 2020 all forms of renewable energy – including concentrating solar power (CSP) and offshore wind – will compete with fossil fuels for new power generation needs, a fact that now underpins a compelling business case for renewable energy.” But integration in a solar-dominated energy system will incur higher costs than in a system with more wind, according to BP.

BP notes that gas is expected to play a continuing role in the energy mix as we progress towards a lower carbon future, with potential for even greater use if shale resources are further developed.

BP’s The Energy Outlook – 2018 also suggests that oil and gas could provide more than 40 per cent of the world’s energy in 2040. The analysis shows that demand for gas will continue to grow to 2040, BP believes that this reflects major efficiency gains in transport as well as heat and power, with much of the world’s heating expected to be delivered via gas-fired appliances through to 2050. Gas is also expected to be used alongside CCUS to back-up renewables when required.

Digital technologies could help gas operators reduce greenhouse gas emissions. Technology can help to decrease the average lifecycle costs (the combined cost of development and operation over the life of the field) for oil and gas production by around 30 per cent over the long term, yet around $600 billion of annual investment is needed in the upstream oil and gas sectors to meet the projected energy demand.

According to BP “these conclusions all demonstrate the over-arching message … that technology has huge potential to improve the way that the world finds, produces, processes and consumes energy. Technology is not only supporting sustainability, but also providing consumers with more choices.”

But while advances in technology can help to increase energy efficiency and improve the affordability and availability of low-carbon energy, these alone cannot deliver the reductions needed to meet the Paris Agreement’s “well below 2°C” goal. Instead, BP suggests that changes in policy and shifting consumer behaviour to make lower-carbon choices will be necessary to make the “profound change” required to meet the Agreement.

[ii] In its 2018 Outlook, BP examines the different energy systems of China, North America and Europe (which combined represents 50 per cent of the world’s primary energy consumption) and assesses around 130 energy technologies - looking at factors such as investment, operating and fuel costs, capacity factors, and advances in technology (including the falling costs of technology over time).

[iii] Studies on power, transport and heat, include a carbon price in the core calculations to identify potential differences.