EV development: Will it stall or accelerate?

Energy Minister Josh Frydenberg recently stated that electric vehicles (EV) would revolutionise Australia, which promptly incited debate about whether the government should support the development of EVs or incentivise their purchase[i].

EVs have the potential to deliver a range of benefits to the economy, environment and consumer. And advances in technology have created a new breed of vehicle that could surpass petrol-driven cars on safety, running costs, performance and design – but where do EV developments currently stand?

The EV market is small, making it hard for manufacturers to achieve economies of scale. And building cars quickly has proven challenging. A market leader Telsa, for example, has fallen behind on its mass market production of the highly anticipated Tesla Model 3[ii]. Launched in July last year, by August the entry-level car had reached 455,000 pre-orders.

The Model 3 is Telsa’s first mass-market vehicle, and while some questioned if Tesla could get the cheaper model off the ground to meet demand, the company’s downfall actually came from its strongest product offering to date – building the batteries. The demand for batteries, and the raw materials that go into them, is also exercising the planning of major car manufacturers like BMW[iii] and the Volkswagen Group[iv] which have sought to lock in supplies. We have previously written about the challenges emerging from relatively limited global supplies of cobalt for batteries.

In the Model 3’s case, Tesla required an unprecedented number of battery packs to build 500,000 Model 3s, so it sped-up battery assembly and automated a large amount of the production process. This lead to bottlenecks and delays in the battery production line – which was described as “production hell” by Elon Musk himself[v].

In the fourth quarter of 2017, only 1550 Model 3’s had made it off the production line[vi]. Musk had previously predicted that by December 2017, Model 3 production would reach 5,000 cars a week, but at the start of 2018, this goal was pushed back to mid-2018[vii]. According to the Tesla website, deliveries for Model 3 reservations placed today will commence in late 2018[viii].

So where do we currently stand?

In a report released last year, Accelerating EV Adoption without Breaking the Bank, analysts at Energeia looked at the EV market in both Australia and California. It identified three key issues that are currently holding back the uptake of EVs:

Energeia’s analysis shows that customers are ultimately drawn to car models that are already popular within the market.

In a recent op-ed, Dr Alan Finkel stated that Australia’s bestselling light vehicle is the Toyota Corolla. He points out that the 2017 petrol sedan has emissions of 178 grams per kilometre while the much larger Tesla Model S75 RP has lower emissions, at 168 grams per kilometre, charged on the 2017 national electricity grid (910 kg/MWh emissions).

Yet Energeia’s report highlights that the EV models currently offered in the Australia market are not high-selling vehicle lines, which could be a contributing factor to slow uptake.

Energeia looks at the uptake of diesel in the 1990s (and later hybrid electric vehicles), which showed that customers were inclined to make “more economically rational investment decisions where diesel was offered in the model that they liked to drive in the first place.”[ix] Shown in figure 1, the report estimates that vehicle availability is a key driver in customer uptake. 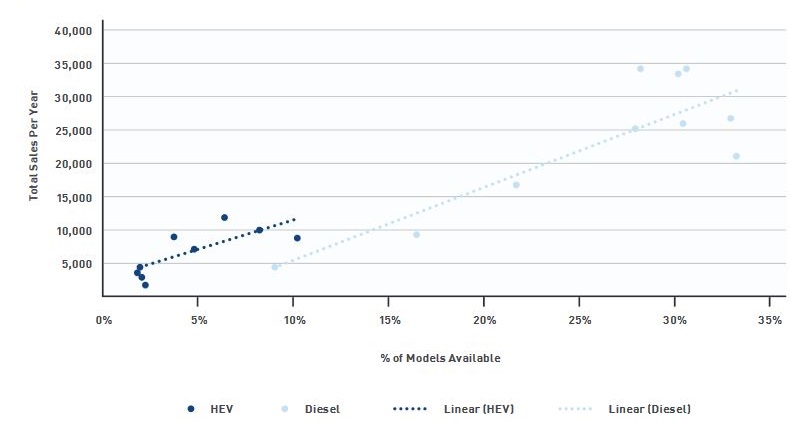 Energeia states that if Australia’s highest selling vehicles were offered as battery electric or plug-in hybrid electric vehicles, there would be a three-fold annual increase in EV sales compared to current incentive levels.

While Energeia argues that better take up will occur if known models are built as EVs, McKinsey & Company in a paper on trends in EV design postulates that cars developed from scratch are better (in terms of range and interior room, for example) rather than modified versions of existing internal combustion engine (ICE) models made on existing production lines[x].

McKinsey’s benchmarking showed “a clear gap in driving range and interior space between models with native EV platforms and those based on ICE. Native EVs optimize battery packaging; non-native EVs force the battery into the awkward footprint of the ICE platform, which limits the realised energy capacity”[xi]. The native EV can increase range without pushing up price (Figure 2). 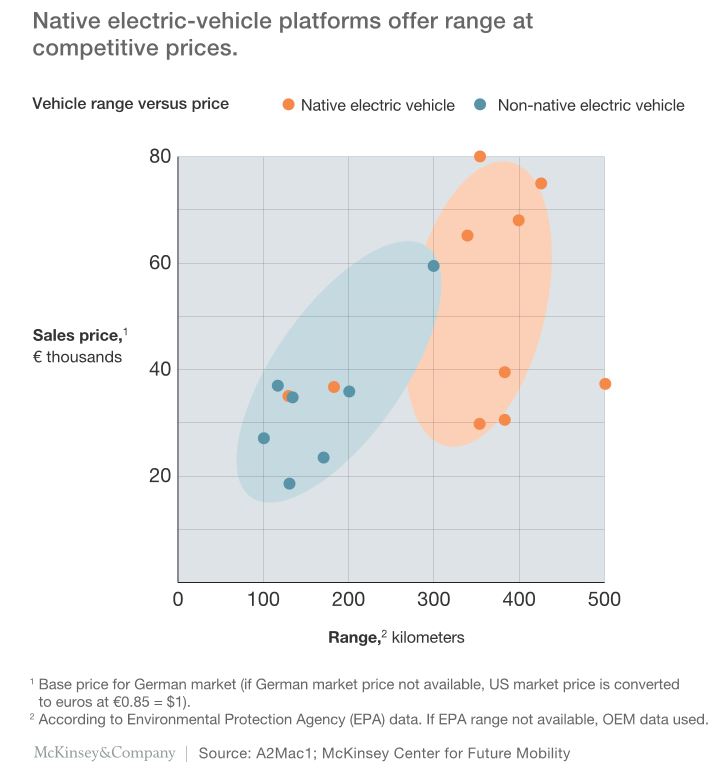 Energeia’s report anticipates that as each new model increases its driving range, EVs will grow to become the single largest load in a residential premise[xii]. It suggests that extending each model’s driving range will not see EVs driven for longer distances, but instead drivers will charge less frequently and there will be an increasing demand for higher charging rates.

Energeia estimates that mid-size battery electric vehicles will reach a driving range of 400 miles (644 kms) and charge rates comparable to 7.2 kW within three to five years.

Energeia’s modelling of charging patterns (figure 3) shows that electricity tariffs could lead to an increase in peak demand. 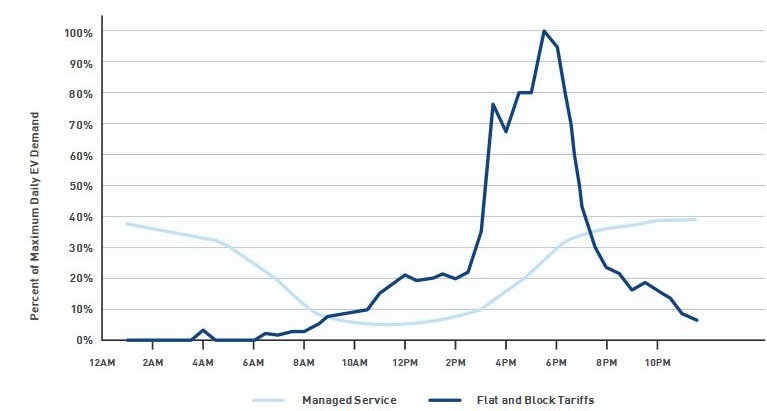 The modelling predicts that EV driven peak demand is expected to begin by 2020. A solution, according to the report, is “orchestrated managed charging.” In the US there have been a small number of pilot programs experimenting with different technologies to determine the best approach to managed charging. With varying levels of success, some include[xiii]:

The report found that the current thinking around charging infrastructure (i.e. Enable EVs to be used for any type of trip distance; encourage charging during excess solar supply; and, enable people without a garage to own an EV) could lead to under-utilisation, inefficient investment, and avoidable increases in electricity distribution costs.

To identify a possible solution, the report looks to California to illustrate that gas stations may have already solved refuelling obstacles. The future of EV charging stations could be based on the current “gas station refuelling model”. The model solves the problem of recharging convenience – via an already familiar and easy to accept method for the driver – while also resolving some of the development and cost issues associated with “destination charging” (Figure 4).

According to the report, “the sooner high powered public EV charges are collocated at gas stations across California, the sooner we will see drivers without a dedicated parking space transitioning to electrified transportation options, and a viable charging business model.”

An esaa report looked at the key demographic and geographic trends common among early Californian adopters of EVs. These included distance from the CBD, availability of off street parking and households with two or more cars. Applying these metrics to Australian capital cities, a typical sample of the most highly suited EV suburbs in each capital city is shown in figure 5. 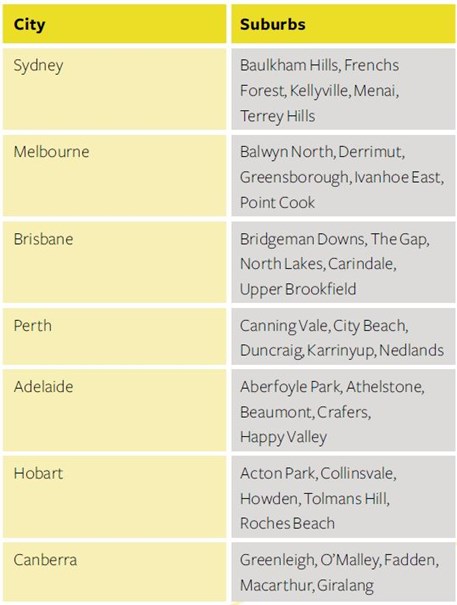 Tesla produced just over 100,000 vehicles in 2017[xv] and despite production bottlenecks and delays, the company is still aiming to produce 1 million cars per year by 2020 (for context, Toyota has produced more than 10 million vehicles per year since 2012). According to the US Energy Information Administration (EIA), there is growing demand to support this ambitious goal (Figure 6).

These increases are helped by California’s Zero-Emission Vehicle regulation that requires a minimum percentage of car and truck sales to be electric and plug-in hybrid electric vehicles in California and nine other states. The regulation will come into full effect in 2025 - the same time the sales of these vehicles is expected to reach 1.1 million[xvii].

Outside the US, governments around the world have introduced measures to accelerate the demand of EVs. The EV sales-surge has also been driven by China, where the government is focussed on increasing sales through incentives (figure 7). It is estimated that 700,000 EVs were sold in China last year, with the China-built BAIC EC180 being the world’s top selling EV.

France and the UK will ban sales of new petrol and diesel cars by 2040. The Netherlands, where almost half of all new car sales are already electric or hybrid, is aiming for all new cars sold by 2030 to be emissions-free.

Germany has had disappointing sales since 2016, when the government first offered EV subsidies and plug-in hybrid rebates. EV sales are expected to increase in 2018, due to the increased number of charging stations on highways[xviii]. There is also a 300 million-euro budget for built-out charging infrastructure.

Carmakers are also coming on board. Volkswagen, BMW, Ford and Daimler have come together to invest in construction of a fast-charging network along Europe’s highways - 100 stations by the end of this year are planned, before quadrupling the total by the end of the decade[xix]. 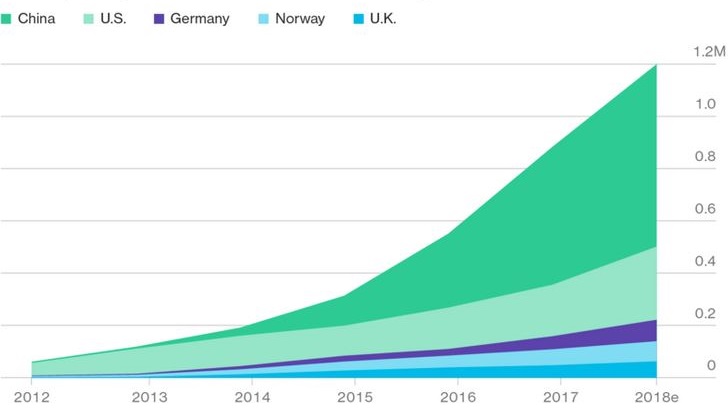 Car manufacturing is scale-intensive, and while the small EV market makes it harder for manufacturers to be cost-competitive, it is still developing. In 2017, many carmakers announced plans to bring electric versions of their vehicles to market in the next few years. Dominant sellers within the Australian market, Toyota and Mazda, pledged to build a US $1.6 billion electric and hybrid vehicle plant by 2021. The companies also announced that they are aligning with manufacturer Senso to develop basic EV technology with plans to expand beyond the Toyota Prius. While Ford vowed to contribute $4.5 billion over five years on new all-electric and hybrid vehicles, with 13 new models expected for release by 2023.[xx]

[iv] The Guardian, Carmakers’ electric dreams depend on supplies of rare minerals, 30 Jul 2018

The Federal Government’s new legislation to clarify offshore energy developments, was greeted with suggestions it would prompt a rush of offshore wind farms around our coastline. Offshore wind farms typically take 6-10 years to develop and build. Currently many of these projects are in pre-feasibility stage.

Sep 16 2021
Read Analysis
GET IN TOUCH
Do you have a question or comment for AEC?