Electric trucks: Running on empty or ready to roll?

Late last year Elon Musk tweeted that the new Tesla Semi will “blow your mind clear out of your skull and into an alternate dimension[i].”

But there are still many different perspectives on the viability of an electrified commercial truck fleet: The cost of the trucks need to be on par with diesels, they must be shown to be reliable and efficient, and there are challenges in managing new charging infrastructure and the trucking supply chain.

So what is the current viability of what are known as commercial battery electric vehicles (CBEVs)? The North American Council for Freight Efficiency (NACFE) recently released a guidance report that looks at the pros and cons of CBEVs in the trucking sector.

We take a look at the report, as well as some different perspectives.

According to the NACFE report, Electric Trucks: Where They Make Sense, “opinions vary on whether this technology is a viable alternative to traditional powertrains; they are considered a threat by some and a promise by others … information is rife with biases and vested interests.” NACFE claim that its report provides a middle-ground voice to the discussion.

The report considers light (Class 3; Urban), medium (Classes 4 through to 6; Regional) and heavy trucks (Classes 7 and 8; Long-haul) and weighs up arguments for and against four key areas: weight, technology, cost and charging (Figure 1).

Figure 1: Ten arguments for and against electric trucks 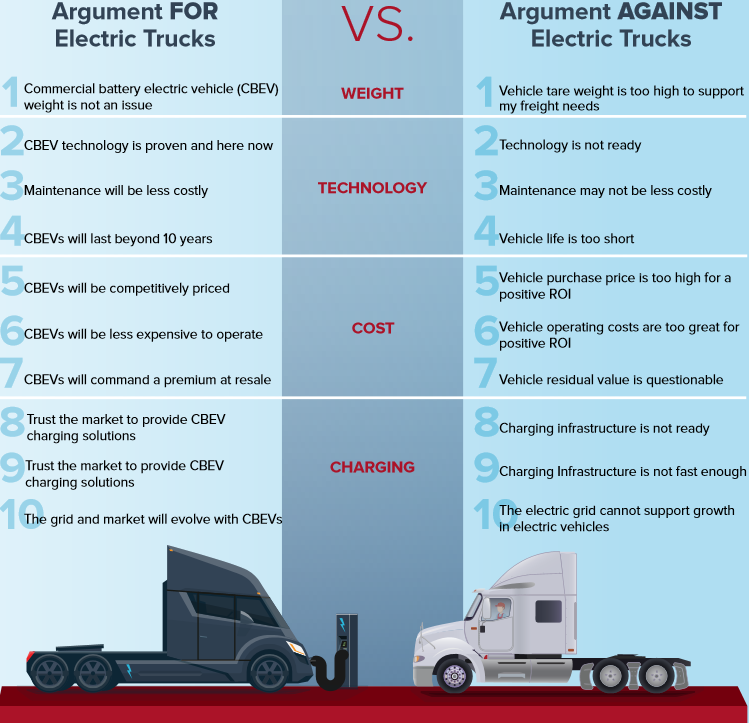 NACFE believes that CBEVs may not be a solution for every application or market, but there is a possibility for their increasing role across all vehicle classes. The report found:

NACFE also developed a parity chart of 22 attributes and estimated at what point in the future an electric truck would match a diesel system (Figures 2 and 3). It notes that this highlights that “viability is a series of trade-off discussions, not a single thumbs up or thumbs down.” 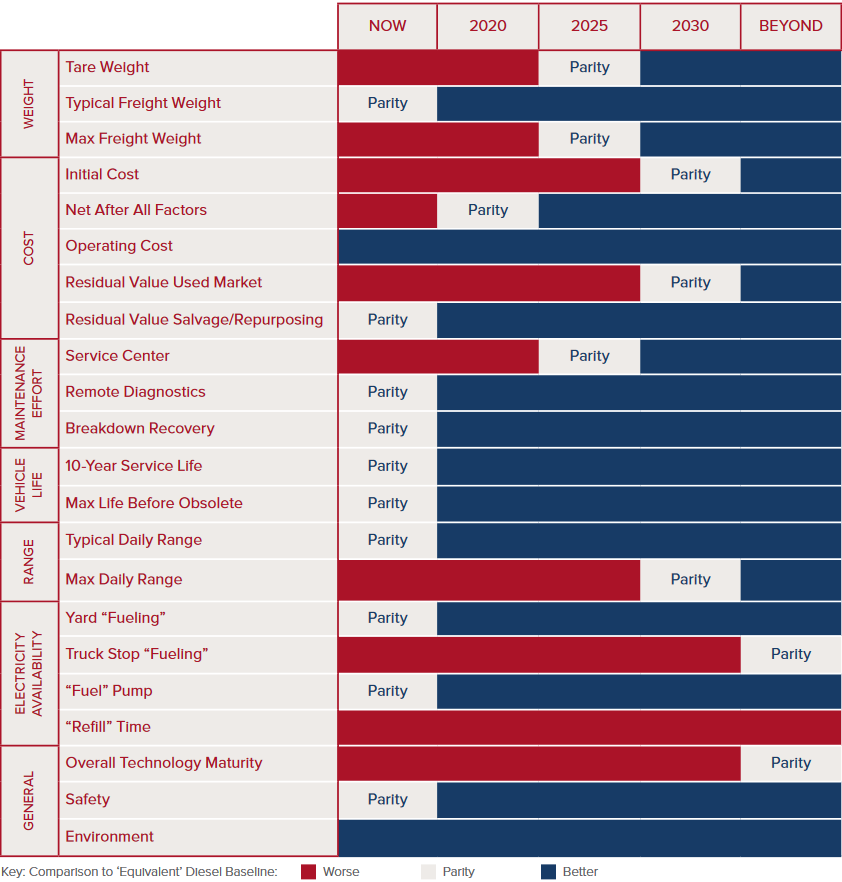 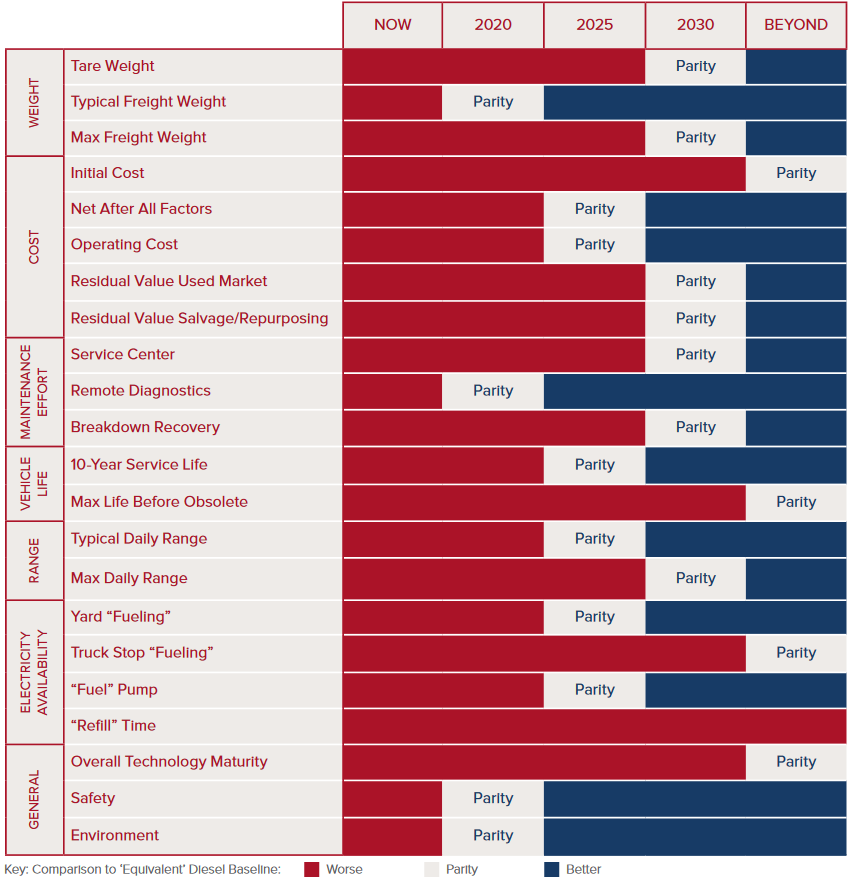 Electric trucks are not a new idea, but now with supporting technology, government regulation, and increasing cost-competiveness, they are becoming more viable. Although barriers to entry, especially for long-haul vehicles, still exist.

It’s been almost two years since Elon Musk first publicised his vision to electrify the commercial transport sector, announcing that “the Tesla Semi will deliver a substantial reduction in the cost of cargo transport, while increasing safety and making it really fun to operate.”[ii]

The Tesla Semi (which falls under the Class 8 long-haul category) is the company's entry into the CBEV market. Unveiling plans in November 2017, Musk claims that it will be able to accelerate from 0 to 100 kms in 5 seconds or 20 seconds at maximum capacity (vs. 60 seconds for a diesel truck) and use less than 2 kWh per 1.6 km. Initially there were two versions of the truck planned with a 300 and 500 mile (480-800KM) range. Some have been sceptical about Tesla’s range claims on a single charge, yet despite this, Musk announced last week that the Semi will now have a range of up to 600 miles (960KM).

Tesla is a few years away from producing the Semi. The company has a history of production-related issues - previously written about here. While the demand for batteries, and the raw materials that go into them, is also exercising the planning of car manufacturers - also previously written about here. However Tesla has started taking pre-orders, including orders from Walmart, DHL, UPS, FedEx and Pepsi.

Smaller start-ups like Los Angeles’ Thor Trucks are also eyeing the semi market. Thor claim that their ET-One has a range of up to 300 miles (480KM) at a price tag of $US150,000 to $250,000 depending on vehicle configuration. It is currently available for demos only, before pre-orders and production start in 2019.

In 2017 researchers at Carnegie Mellon University in Pittsburgh, Pennsylvania, stated that the potential for the Tesla Semi to revolutionise the trucking industry has led to “speculation on the cost and performance of the vehicle” largely based on “back-of-the-envelope estimates”.

Their research - Performance Metrics Required of Next-Generation Batteries to Make a Practical Electric Semi Truck - notes that the Tesla Semi would have to meet the performance requirements of a commercial Class 8 vehicle at a reasonable cost, to be considered as an alternative to existing trucks. This means it would have to meet an average annual distance of around 75,000 miles (120,000KM) or about 300-600 miles per day, an average daily driving time of 8-16 hours, and an average payload capacity of around 14,500kg (which can peak at 20,000kg).

It is estimated that a CBEV with a range of 600 miles (960KM) would require a 14-tonne battery and a 900 mile (1450KM) battery would weigh around 22 tonnes. Based on current prices, they calculate the packs to cost between $US290,000 and $450,000. For comparison, a similar diesel truck costs around $US120,000 however the report notes that “a true comparison should include the operating costs of the vehicle and not only the initial costs to account for the difference in price of electricity or fossil fuels.”[iii]

The report found that a battery-powered semi would “be limited to a driving range well under 600 miles, a small payload capacity, and a prohibitively high cost. Enabling a longer driving range of 600 miles needed by the current standards of the trucking industry might require a transition to beyond Li-ion batteries (Figure 4).”[iv]

Figure 4: Summary of a comparison of current and beyond Li-ion batteries for electrifying semi-trucks 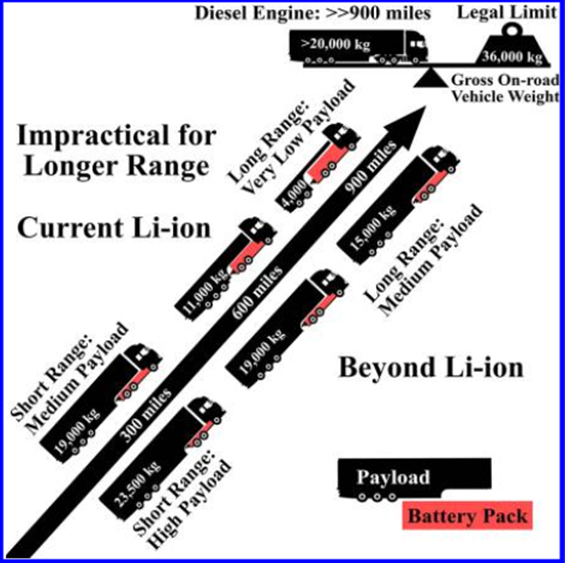 Last year, McKinsey & Company modelled the early and late adoption of different classes of CBEVs, in China, Europe, and the United States (Figure 5). The two scenarios have different assumptions, such as the effectiveness of regulation, the timing of infrastructure, and supply availability.

Echoing the research of Carnegie Mellon University, McKinsey & Company believe there is strong potential for uptake of light and medium classes of CBEVs. And a low uptake in the heavy class “mainly because of high battery costs, and, as such, later total cost of ownership parity”.

Figure 5: Adoption of different classes of CBEVs across China, Europe, and the United States 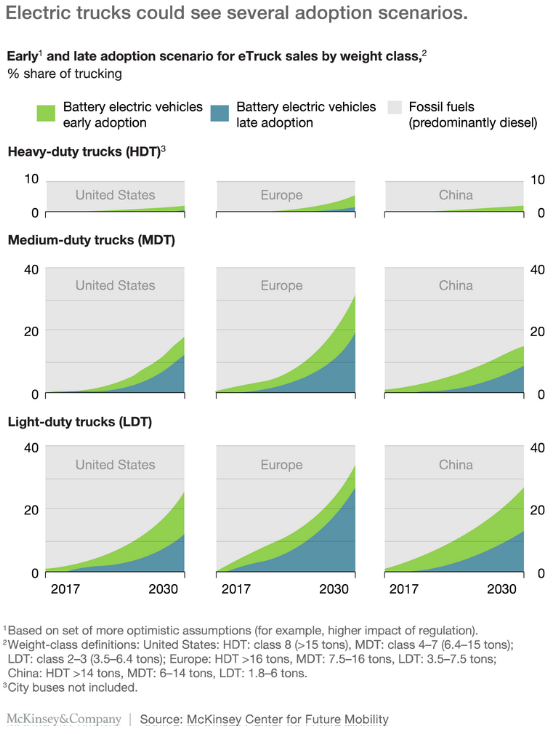 In the medium duty truck and light duty truck classes, McKinsey’s late adoption scenario suggests that CBEVs could reach 8 to 27 per cent sales by 2030, depending on region and application. In the early-adoption scenario, which is based on more optimistic assumptions about the expansion of low-emission zones, CBEVs could reach 15 to 34 percent sales penetration by 2030.

While it’s still a hard business case for heavy trucks, there is a possibility for an increasing role of light commercial electric vehicles that travel shorter distances and consistent routes.

A UPS pilot fleet of 35 lightweight electric trucks is expected to hit Paris and London roads by the end of 2018. Volkswagen has added medium-class electric vehicles to its portfolio for development. Volvo Trucks is also looking at developing within the Class 6 and 7 market, their FE Electric garbage truck is expected to be operational in Hamburg, Germany, early 2019.

More locally, in 2014 Renault partnered with Australia Post to conduct a 12 month trial of the Electric Kangoo Z.E. van in Sydney and Melbourne. Following the trial, Renault announced it would import the Kangoo Maxi ZE van to Australian businesses and government organisations. The electric van can carry up to 650kg and has a range of around 200km[v].

Chinese brand, LDV, also announced a trial in 2017. Over 12 months, its EV80 vans will be used by courier companies, and potentially Australia Post, to evaluate the van’s viability in high density urban areas. It has a lithium-ion battery that powers a 100kW/320Nm electric motor and a driving range of 150-250km[vi].

Australia has also been active in manufacturing with Melbourne’s SEA Electric claiming to produce the first Australian 100 per cent electric commercial truck. The EV10 has 120kWh of battery capacity, a range up to 180kms, and a 10 tonne capacity. The company says the EV10 can reach 0-50kms in 6 seconds, and will have a lower total cost of ownership than a new diesel vehicle.