Like Australia, the US is shifting to an economy increasingly powered by renewables. As the transition continues apace they are also facing some of the same challenges confronting the National Electricity Market (NEM) in ensuring reliability and affordability along with a lower emissions grid.

There have been news reports recently that some grid operators around the US have raised concerns that the intermittence of some electricity sources is making it more challenging for them to balance supply and demand.

A decade ago, dispatchable plants - coal, nuclear and gas-fired - supplied the bulk of the US electricity. Now renewables, wind and solar farms, have become some of the most substantial sources of power in the US, just behind coal and natural gas, with the latter providing 38 per cent of electricity generated last year.

Figure 1: US Electricity by Generation Type 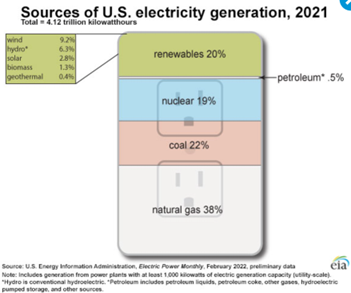 The Midcontinent Independent System Operator[i] (MISO) flagged at the end of April that there could be “insufficient firm resources” to cover the summer peak under typical demand and generation outages.  MISO, the second largest energy system in the US covering 15 states, as well as the Canadian province of Manitoba, has called for increased non-firm imports as well as potential emergency resources to meet its 2022 summer peak demand, given that warmer conditions are being forecast.  An estimated 13GW of coal and gas-fired power plants are expected to close in its energy system by 2024 as a result of economic pressures, as well as a rapid shift to renewables.

In response a large amount of battery storage is under development across the US (see figure 2), but regional grid operators are still flagging that the pace of installation may not be quick enough to offset the closures of traditional power plants.

California released its summer loads and resources assessment last week, and the state’s grid operator, California ISO (CAISO), has projected that it will need 53GW of utility-scale solar, 37GW of battery energy storage systems (BESS), 4GW of long-duration storage and more than 2GW of geothermal, alongside 24GW of wind power reserves by 2040.

The North American Electric Reliability Corp (NERC), which develops standards for utilities and power producers, has warned in its most recent long-term reliability assessment that the Midwest and West also face risks of supply shortages in the coming years as more conventional power plants retire.  According to the NERC, electric grid instability is being driven by the closure of older plants and the addition of new variable resources, combined with extreme weather.

The NERC’s projection of risks across US grids is shown below. 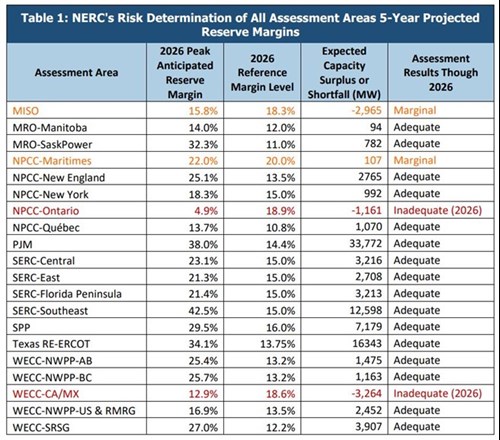 MISO has also previously pointed to the reliability impacts on its grid from the energy transition and changes in consumption patterns from the changing energy mix. It has reported the entire region “faces increasing reliability risks outside of the summer peak-load months."  Specific efforts in this area include providing a longer-term and deeper assessment of system needs across all hours of the year, including required capabilities such as flexibility; shifting to verifying sufficient generation adequacy across all hours of the year; improving how resources are accredited; ensuring that prices accurately reflect market conditions, especially during emergencies; and development of market products that provide the right incentives for resources to maintain system reliability”.

Rapid changes to generation resources and consumption patterns have “altered the region’s historical summer-centric risk profile, making it more prone to grid emergencies in winter and shoulder-seasons that rarely posed risks in the past,” it notes.

Reliability will remain a focus of the energy transition debate here and in the US. A recent Australian Energy Council discussion paper (Zero Emissions Dispatchability) highlights that electricity systems with high levels of renewables will always need some dispatchable plant.  Dispatchable plant is power generation that can be relied upon to run when required. Its availability is not weather dependent, and it is ideally able to ramp quickly.

Of the 7,621 MW of new plant scheduled to be installed on the California ISO grid, 3,271 is dispatchable (and of that 3124MW will be supplied from batteries). Last year California installed around 60 per cent of all batteries in the US (see figure 2). The remaining 4,350MW of new plant is non-dispatchable. A breakdown of the new capacity is shown below.

California has already seen significant amounts of new renewable generation, and especially solar, reach commercial operation to meet the state’s 60 per cent by 2030 requirement[ii]. Its latest summer loads and resources assessment released last week lays out the evolving challenges and notes that to successfully meet the state’s Renewables Portfolio Standard goals increasing amounts of flexible and fast response resources will be needed. And as elsewhere, the increased renewable capacity in the grid is throwing up unique challenges for the ISO operations and the analytical tools used to assess reliability:

The shifting generation mix is also “constantly” increasing ramping requirements both up and down, and is a significant departure from what has been needed from the generation fleet previously. And the decline in dispatchable generation as units retire is beginning to challenge the ISO system’s ability to meet its net peak demand after sunset and flexible capacity requirements.

We are seeing similar challenges in Australia. Locally winter can be the most challenging period for large-scale renewables due to lower solar irradiation (which will also impact output from rooftop solar) and there can be periods of subdued wind output. The capacity factors of the NEM’s combined wind and solar fleet rarely above 50 per cent and can be as low as less than 10 per cent.

At times, such as winter periods when there is no solar output and low winds, up to 16 hours of dispatchable plant may be required. And this can be for several nights. Short and long duration storage and low emissions plant are capable of delivering this. Technologies include lithium-ion batteries, pumped and conventional hydro, as well as gas and biomass peaking plants. Additional transmission and transmission upgrades will also play a role.

Recently we have seen the proposed Hunter Power Project, a gas-fired power plant at Kurri Kurri in the NSW Hunter Valley which will provide up to 660MW of on-demand dispatchable plant once completed, while the Tallawarra B fast start gas plant will be able to supply 316MW. Both are intended to help provide system security and complement renewable generation.

The 300MW, 450MWh Victorian Big Battery - constructed outside Geelong – is designed to allow the transmission assets connecting NSW and Victoria via the Snowy area to operate at higher flow levels, because the battery will be contracted by the Australian Energy Market Operator (AEMO) to provide rapid guaranteed backup to reduce flows if something goes wrong, and will buy the market operator more time to rearrange the supply-demand balance (more details on the operation of the battery and its role can be found in this earlier EnergyInsider).

[i] MISO covers operating the power grid across 15 US states and the Canadian province of Manitoba and is the second largest energy system in the US.