Victoria’s big battery: What exactly is it for?

Announced with great fanfare[i] on 5 November, the Victorian Big Battery (VBB) may not win any prizes for imaginative naming, but it’s an intriguing project for a host of reasons:

This overview attempts to summarise what we know so far about what the VBB will do, and the background and justification for its construction.

What it won’t do and why that doesn’t matter

How will it increase the capacity of the NSW-Vic interconnection?

Of course, the VBB won’t change the physical size of the transmission assets connecting NSW and Victoria via the Snowy area[ii].

What it will do in some situations is allow that transmission to be operated at higher flow levels, because the battery will be contracted by the Australian Energy Market Operator (AEMO) to provide rapid guaranteed backup to reduce flows if something goes wrong, and buy the market operator more time to rearrange the supply-demand balance.

Without this guaranteed backup, the transmission lines carrying flows from north-east Victoria and NSW have to be operated more conservatively so there is no risk of very rapid thermal overload if one of their two parallel circuits trips. The battery’s contracted capability effectively provides additional headroom of up to 250 MW on these thermal overload limits, enabling higher imports under some conditions from NSW on top of flows from hydro generators in north-east Victoria and the Snowy scheme.

These thermal overload limits are usually only important on very hot days in the peak summer period. For this reason AEMO is only contracting the battery to provide this 250 MW backup service from 1 November to 31 March each summer. AEMO will pay the battery owner $12.5 M per year (escalated with CPI) over the period 1 November 2021 to 31 March 2032.

In some past years where reliability was tight, AEMO had contractual arrangements with large aluminum smelting loads in Victoria to use rapid demand reductions as backup for running the same transmission lines at high short-term ratings. So the concept underlying the import capacity increase enabled by the VBB is not new, only the means of achieving it. It’s not clear from the published justification for the VBB why it has been chosen in preference to demand side alternatives.

Will the VBB always increase the interconnector limits?

No. Obviously outside the summer period when VBB capacity is contracted to AEMO, interconnector thermal limits will be unaffected. Nor will the VBB directly affect capacity to export power from Victoria to NSW. And as well as thermal capacity limitations, AEMO imposes other types of constraint which can limit flow levels across transmission lines. “System security” constraints are designed to ensure that credible system disturbances such as trips of generation unit or transmission lines do not cascade into widespread disruption and blackouts.

On the NSW-Victoria interconnection, as well as the thermal constraints discussed above, there are various non-thermal security constraints that can also limit power transfers. In mild weather or when hydro generation from Snowy and north-east Victoria is not near maximum levels – which is most of the time – one of these security constraints will normally be the limiting factor on maximum power imports from NSW.

In relatively recent instances of load shedding in Victoria such as those experienced on 24-25 January 2019, the limits imposed by one of these security constraints were very close to the thermal constraints addressed by the VBB. This meant that even if more headroom had been available on the thermal constraints on those days, imports from NSW could not have been materially increased.

Since then, AEMO has contracted with a NSW participant to provide voltage support services that will create more headroom under that security constraint, but only when Victoria would otherwise face load shedding or activation of Reliability and Emergency Reserve Trader (RERT) reserves[iii]. The duration of this contractual arrangement is not stated.

So while it’s clear that the VBB will assist in lifting NSW-Vic thermal constraints during peak summer periods, and is likely to assist in reducing the probability and / or size of load-shedding events, it’s not yet obvious what the overall impact on interconnector operation will be. It’s therefore worth qualifying the statement that the VBB will “lift NSW-Vic import capability by up to 250 MW” with the rider that a lot of the time the effective increase might be well under 250 MW, or even nil.

Why is the VBB being built under “Vicxit”? And what is “Vicxit”??

In late 2019 the Victorian government announced that it would be legislating to in effect exempt itself from important aspects of the economic regulatory regime applying to transmission investments in the NEM. The full details of this regime and the Victorian government’s carve-out, colloquially known as “Vicxit” (short for “Victorian exit”) are complex[iv], but the thrust of the arrangements is that by Ministerial Order, the Victorian Government can exempt projects from the normal regulatory processes and cost-benefit analysis for transmission-related investment overseen by the Australian Energy Regulator (AER).

In the case of the VBB, the relevant Ministerial Orders[v] specify that under contract to AEMO the project is providing a “System Integrity Protection Scheme” (SIPS), typically a specialised transmission system arrangement designed to increase system security. The SIPS function provided by the VBB is explicitly described in the Ministerial Orders as a “thermal service capable of delivering up to 250 MW of continuous power generation for a period of at least 30 minutes to increase the transfer capacity” of the NSW-Victoria interconnection – which may be why demand-side alternatives – rapid load reductions – were not considered.

Under “Vicxit”, the direct and overhead costs borne by AEMO under the SIPS contract can be recovered from Victorian energy users.

What else will it do?

While the “Vicxit” framework applies to the payments that AEMO will make to the battery these alone almost certainly do not cover the VBB’s total costs and definitely don’t account for its total range of functions. One of the attractions of modern grid-scale batteries is the wide range of services they can provide, often in parallel with one another. Most of the value from these services will accrue to its owner through participation in various NEM markets.

Outside the SIPS contract, the battery’s operator Neoen (or other party that Neoen might contract market operation to) will be able to participate in the NEM in a variety of ways:

Many of these roles are not mutually exclusive with one another, nor necessarily with the SIPS function itself. In principle even the SIPS-contracted capacity would not need to be continuously available to AEMO “24/7” during November-March. Whether the SIPS contract has flexibility to allow for multiple uses in this period, or whether these uses might clash with other system security roles that could be provided under the SIPS framework is not known at this time.

How do the costs and benefits stack up?

Unlike the detailed cost-benefit analysis typically presented for a regulated NEM transmission project, there’s very limited public information on the overall investment case for the VBB. A feature of the “Vicxit” framework is that such analysis can be bypassed.

However two public pieces of analysis are available. The Victorian government has published the Executive Summary[vi] of a “Validation Business Case” comparing customer benefits that are forecast to result from the VBB’s operation to the costs of the SIPS capacity contract which AEMO will recover from Victorian customers. And energy market software specialists Gridcognition have published a blog post[vii] estimating revenues that the VBB might have earned from energy arbitrage and contingency FCAS markets over the last three years, had it been operational.

These analyses are relatively high level and certainly in the case of Gridcognition’s not intended to represent forecast future earnings for the battery, but they are interesting in that they provide a general sense of possible benefits and costs, and also highlight very different aspects of the VBB’s operation.

The Government’s business case summary focusses on three principal projected sources of benefit to Victorian customers, which in total exceed the costs directly borne by those customers (the SIPS contract costs recovered by AEMO through transmission fees):

This chart from the summary shows the magnitude of estimated benefits and costs: 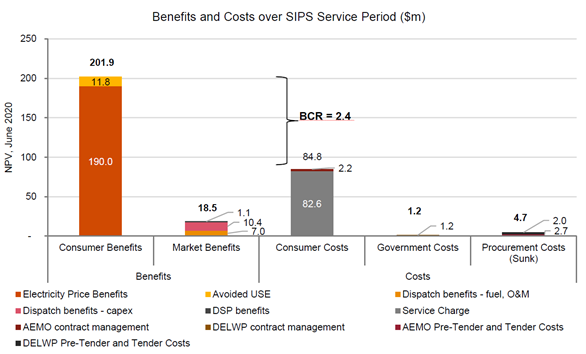 By far the largest source of forecast customer benefit arises from reductions in energy market prices. Market modelling by EY referenced in the summary business case[viii] (but not itself publicly available) reportedly projects that with the VBB operating in the energy market – which is really nothing to do with its SIPS function – Victorian NEM spot prices would be slightly lower than otherwise and assumed to be fully passed on to retail energy users. The benefits of avoided and reduced load shedding (avoided “unserved energy” or USE on the chart above), which are directly referrable to the battery’s SIPS function supporting increased import capability, are forecast to be much smaller (although the analysis points out that there is considerable volatility in this estimate).

The type of cost-benefit analysis required under normal NEM processes (the “RIT-T” test) would probably attribute little or no net economic benefit to reduced spot energy prices per se. Essentially under the RIT-T framework changes in spot prices are viewed as a “value transfer” from one side of the market (eg supply) to the other (demand) with no net global economic gain or loss.

Gridcognition’s analysis focusses on a completely different aspect of the battery’s economic justification, in potential earnings for its owner / operator from participation in the NEM’s energy and FCAS markets, rather than general customer benefits. Gridcognition have not attempted to forecast the battery’s future profitability, but have simply and reasonably  undertaken a historic analysis of revenues the VBB might have earned had it traded its output in these markets over the past three years

This chart from Gridcognition’s analysis summarises simulated historical monthly and cumulative annual revenues, net of charging costs, from these markets. Payments from AEMO for SIPS capacity are not included in these figures.

Figure 2: Including SIPS: Battery is limited to 50MW between November 1 and March 31 (view larger image here) 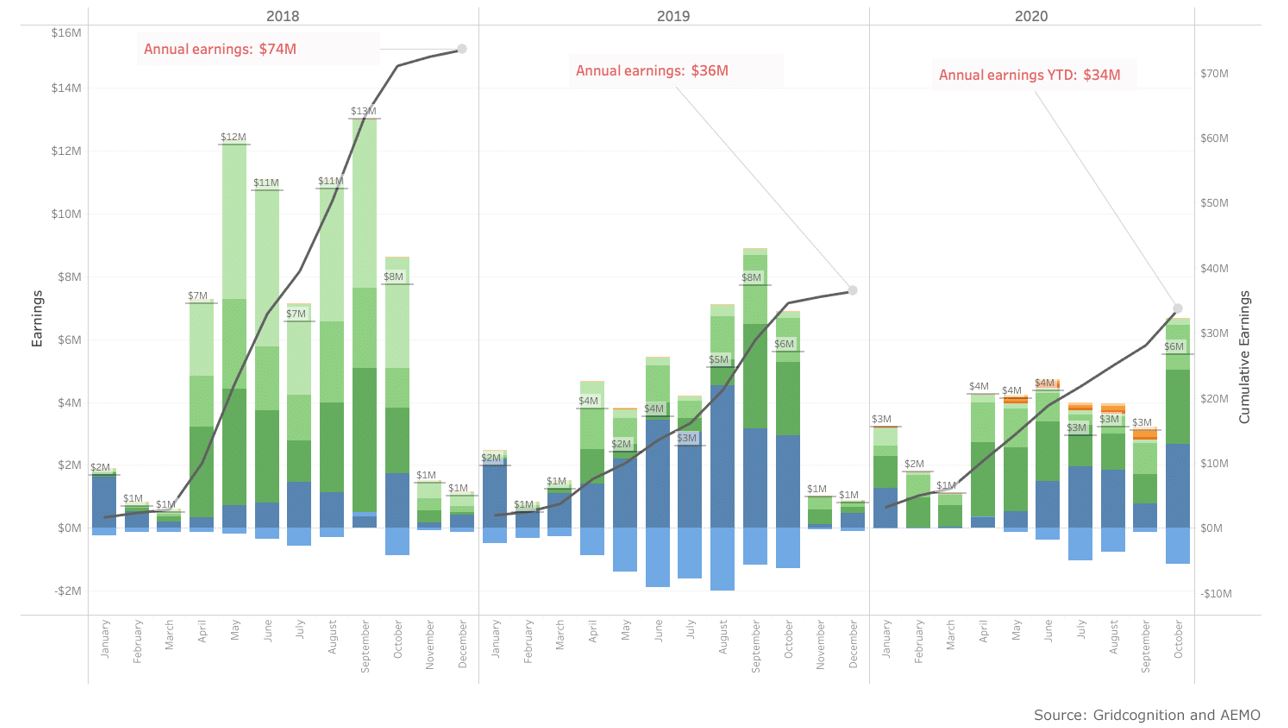 Of course simulated past performance is no firm guide to the future, and there are good reasons to expect that future earnings, particularly from FCAS, will be lower than under a historical analysis, but as an illustration or order-of-magnitude quantification, this analysis remains interesting.

Like its soon to be smaller sibling in South Australia, impetus for the VBB project arose from a state government’s concerns about system security and reliability. Under the SIPS contract with AEMO created by the Victorian government under its “Vicxit” arrangements, the project will be partly underwritten by Victorian energy consumers in return for increasing the state’s ability to import energy at times of system stress. But like the Hornsdale project and grid scale batteries elsewhere it will be able to offer a wide range of capabilities to the market, some of which may only become apparent over time. Exactly which capabilities prove the most valuable and in what proportion their benefits will accrue to various stakeholders – owner, government, consumers – will be fascinating to watch unfold.