Recent papers from key national bodies have highlighted the continued strong growth in renewable generation development in Australia, as well as its flow-on to job numbers in the sector, while also flagging some emerging head winds. We take a look.

The Australian Bureau of Statistics (ABS) has released its latest figures for employment in renewable energy activities, while the Reserve Bank of Australia has released a bulletin, “Renewable Energy Investment In Australia”, that outlines the factors driving recent projects and assesses future trends.

The ABS estimates that 26,850 Australians are now employed in renewable energy with almost half are in the more labour intensive rooftop solar sector, which stems from the fact that more than 2.2 million homes now have PV panels on their rooftops.  Most of the renewable sector jobs are involved in building systems - installing solar panels or constructing wind farms, which, once complete are unlikely to require the same job numbers given the highly automated, low maintenance and fuel free nature of the technologies.[i]

Employment in the renewable sector is now at its highest level since 2011-2012 when employment in rooftop solar PV made up 72 per cent of total direct FTE employment in renewable energy activities. The jump in household solar at that time was spurred on by generous state-basedsolar feed-in tariffs (subsequently amended), a stronger Australian dollar, as well as a general drop in the price of solar systems.

*Government and Non-Profit Institutions (NPI) employees are recorded separately since they are typically engaged in activities that cut across various types of renewable energy.

All states reported an increase in FTE employment related to renewable energy activities between 2017-18 and 2018-19. Victoria reported the largest increase (up by 2540 FTE jobs, more than 70 per cent), with New South Wales (NSW) and South Australia reporting rises of 1540 (25 per cent) and 750 (41 per cent) respectively. In NSW and Victoria this increase was mainly driven by the construction of rooftop solar PV.

Together NSW, Victoria and Queensland accounted for 75 per cent of all FTE employment in the renewable sector in 2018-19. The Reserve Bank in its bulletin notes that these states have accounted for the vast majority of renewable energy projects in recent years.

The RBA’s bulletin notes the substantial growth in investment in renewables between 2016 and 2019 that has fostered the jobs growth reported by the ABS. At its peak in 2018 renewable investment represented 5 per cent of all non-mining business investment, pushed along by factors such as government policy incentives like the Federal Renewable Energy Target, higher wholesale prices, declining technology costs and better access to financing for project developers.

Renewable energy investment has supported activity and employment, particularly in regional areas where large-scale renewable generators tend to be located. As noted by the RBA while most components are imported (such as solar panels and wind turbines), local benefits come from a “spillover” to domestic firms, mainly engineering, construction and installation, with this local content making up an estimated 25-40 per cent of total costs. Some manufacturing firms have also reported stronger demand for local produced electricity generation-related equipment[iii].

The renewables market is expected to slow from its record-setting 2019 when 6.3 gigawatts of new large and small-scale capacity was installed, up 24 per cent on the previous record set 12 months earlier[iv].

The moderation in investment in renewable energy generation in the near term will result from some of the recent drivers unwinding (such as the RET, which is discussed further below) and as a result of some of the challenges of integrating an increasing volume of renewable energy capacity into the grid and a lower Australia dollar pushing up costs[v].

Other factors include a fall in wholesale prices and a change in intraday prices as a result of the shifting pattern in energy use. The increase in solar capacity – both large-scale and rooftop PV – has seen a shift in daytime demand resulting in daytime prices declining relative to morning and evening peaks (we have previously written about the increased number of periods with negative pricing – Negative price records set).

One outcome of the shift in demand was unveiled this week with what has been described as a first-of-its-kind electricity supply contract between Snowy Hydro and a large energy user to cover “super peak” periods.[vi]  The contract will cover the high demand hours during morning, afternoon and evening peaks.

The Federal RET has been met and large-scale certificates, which were worth $80 two years ago, have declined to around $15/MWh in 2022 and could decline further as more renewable capacity enters the system[vii].

The RBA notes that the capacity of new large-scale renewable projects that reached financial close last year fell by around half compared with 2018 (figure 3). But the decline in investment activity in 2020 is not expected to be as sharp as implied by the fall in committed capacity, partly because delays have pushed out the construction timelines of a number of projects[viii].

About 2GW of large-scale renewables are under construction right now, but a new factor is the uncertainty created by the COVID-19 pandemic, which is likely to have impacts on energy demand for years to come (see also NEM demand in the time of COVID-19). 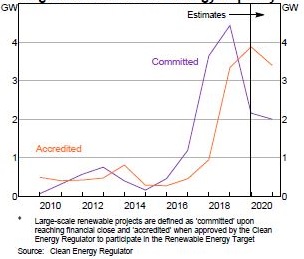 The RBA’s longer-term expectation for renewable investment, however, is for continued growth driven by key factors such as the retirement of the National Electricity Market’s coal-fired power stations and the continued decarbonisation of the economy overall. 2.2 GW of new large-scale