NEM demand in the time of COVID-19

Australia’s COVID-19 response, with lockdowns between and within the states, means many of the nation’s economic activities have encountered new challenges, with many people working from home and commercial premises empty.

A point of widespread interest is how the lockdown is affecting energy demand – one of the best ways to track social and economic events. In the worst affected countries, significant falls in energy demand have occurred. 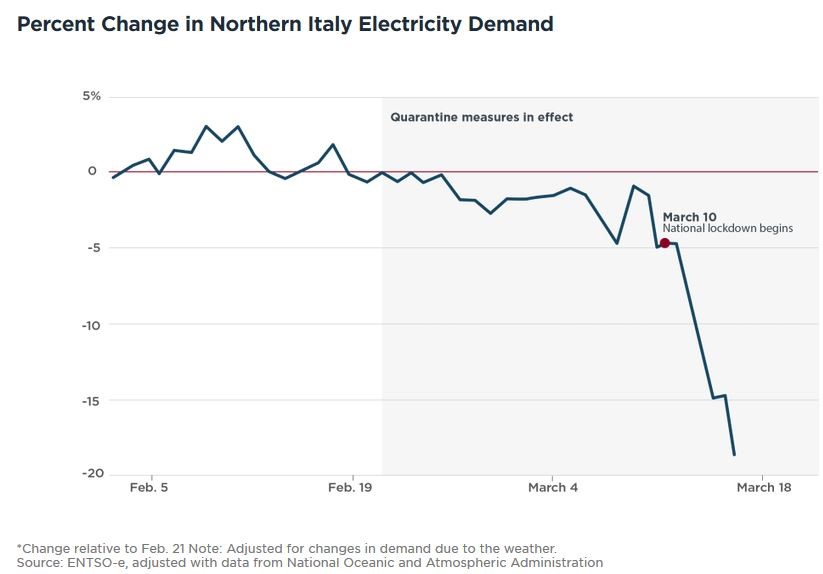 Thankfully Australia’s situation is nowhere near as bad as Northern Italy, and, at this stage, the changes in energy consumption are much smaller. It may still be too early to fully detect the impacts of the lockdown on the National Electricity Market (NEM), but information on electricity demand over the last four weeks can provide some useful insights.

Since the Australian COVID-19 rules have come into progressive effect since mid-March, there has been considerable public commentary on early signs of changes in NEM demand[i]. These have tended to be rather equivocal: fairly small effects lost in the normal day to day fluctuations. It is now however becoming clearer. Below we take a look at the most recent data, with insights that can help to inform future assessments. In particular, we have attempted assess underlying demand by removing the effects of rooftop solar whose output changes with cloud cover.

So what insights can we draw Australia’s real-time electricity consumption? Below we take a look.

As defined by the Australian Energy Market Operator (AEMO):

Figure 2 below, which compares March 2020 to the same period over the last four years, shows that across the NEM states the underlying demand (charts on right) has been offset by solar generation, shifting the grid peak to later in the day (charts on left). This effect has grown very substantially in the last four years. It is however is due to the progressive growth of solar and is not COVID-19 related.

Except for New South Wales, 2020’s underlying demand (black line) remains close to 2018 (yellow line). Though the underlying demand is lower than recent years, it is a surprisingly small reduction – so, if we explain electricity demand as an indicator of economic activity, Australia is nowhere near turning the lights off yet.

Figure 2: Operational demand (left) and underlying demand (right) trends in March over the past four years

Amid progressively stronger lockdowns, shutdowns and working from home, electricity demand across the NEM states surprisingly shows only a small reduction. A week-by-week comparison further illustrates this reduction (figure 3). Key points are:

Figure 3: Week by week comparision on underlying demand across the NEM states 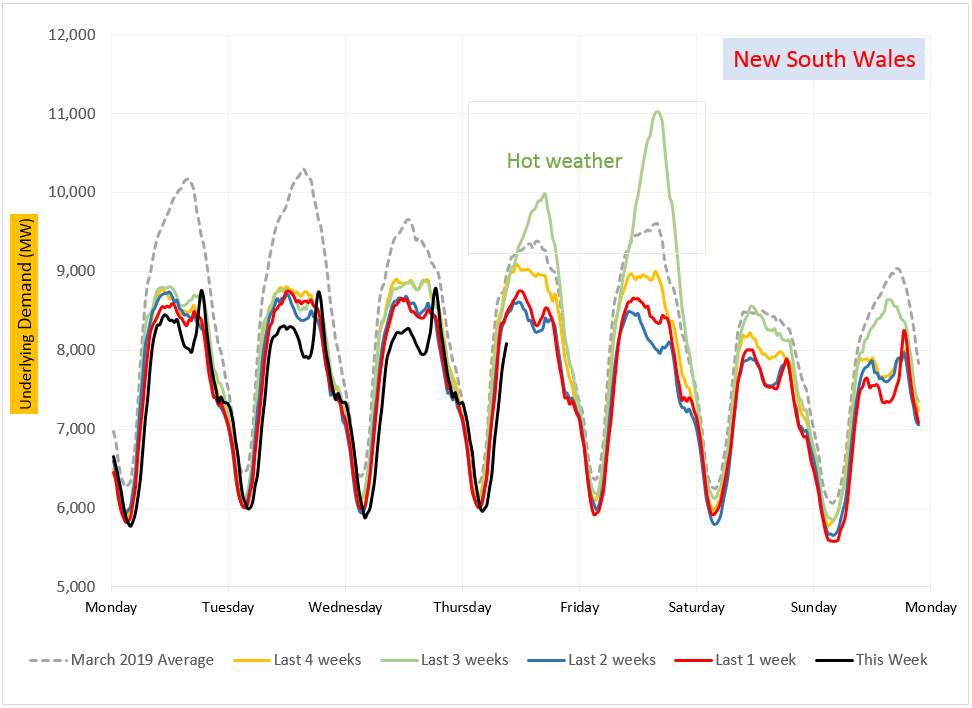 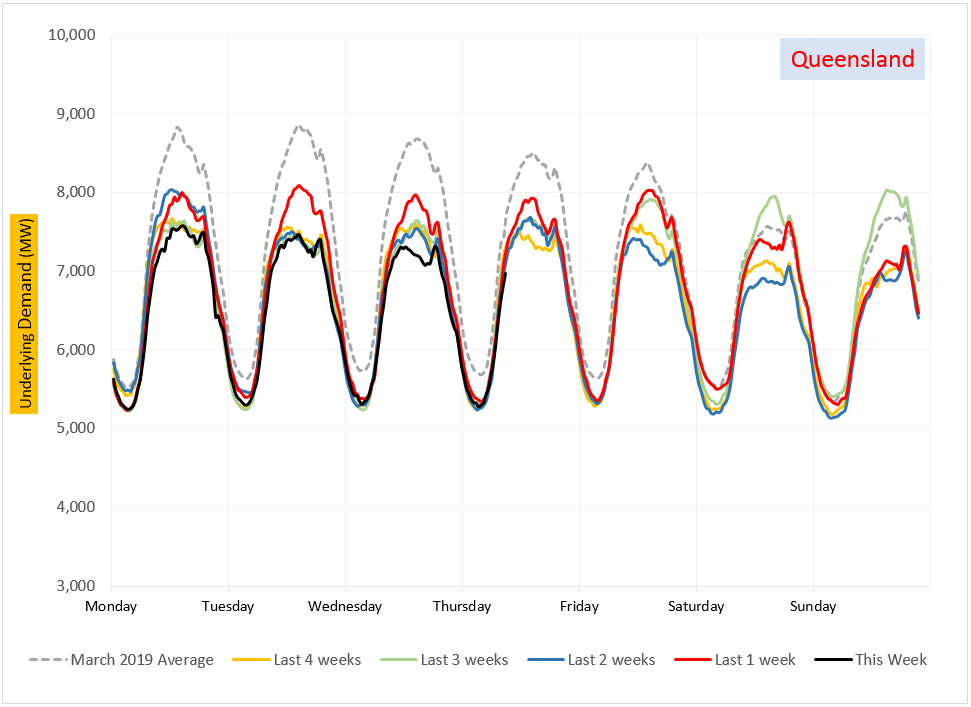 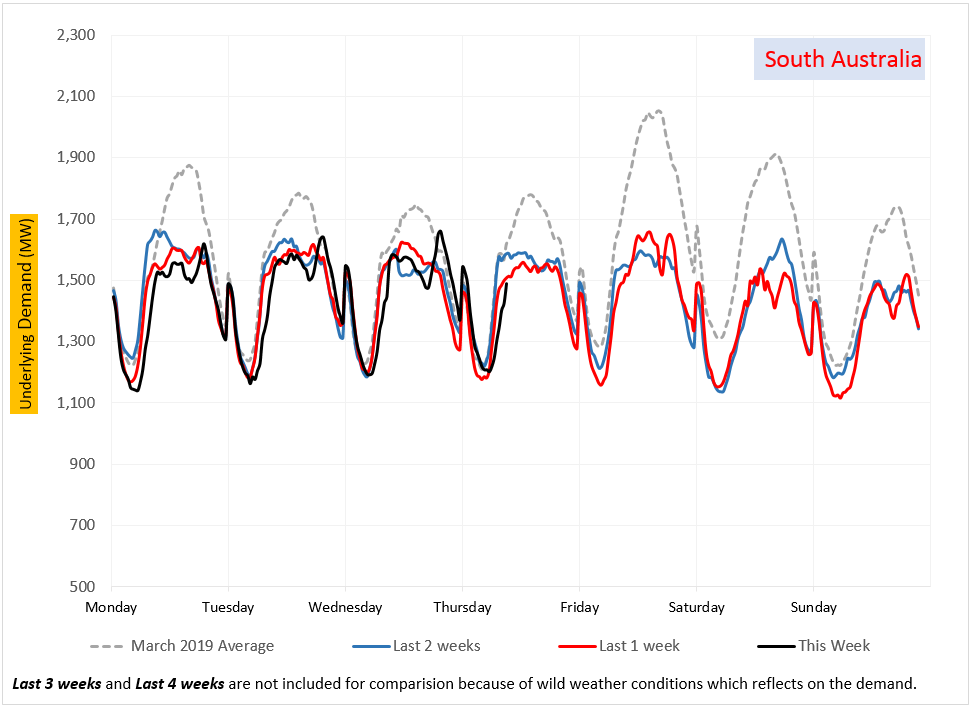 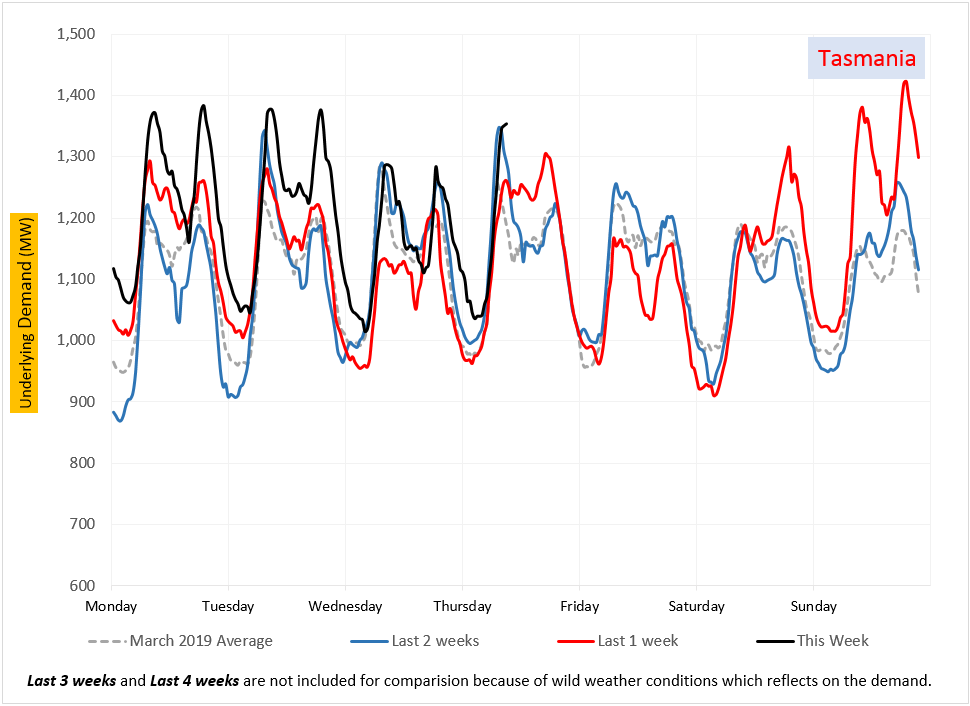 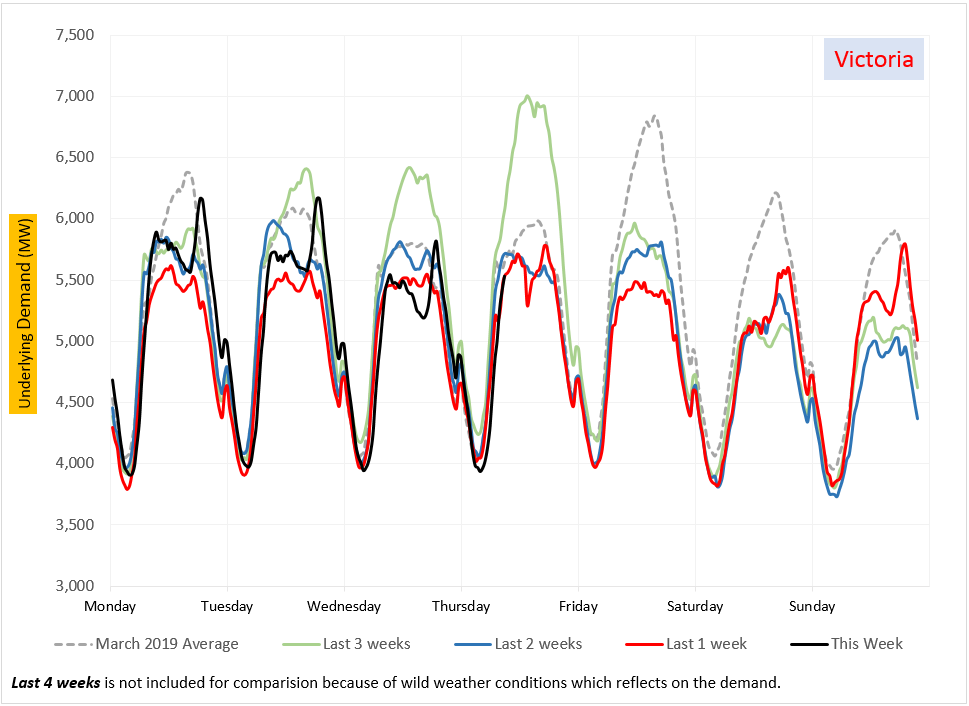 The nation’s lockdown response has been progressively enforced recently.  Impacts in demand at this stage are too early to draw concrete conclusions, however as we continue to move through the different stages of restrictions, demand will remain a point of interest to watch.

And even when the lockdown is lifted, the COVID-19 pandemic is likely to have impacts on energy demand for years to come. Australia is facing a major recession, hopefully somewhat offset by an unprecedented stimulus package. Previous economic downturns have substantially depressed demand growth, and whilst it is far too early to tell yet, there are likely to again be major repercussions.

AEMO’s Wholesale Electricity Market ESOO offers insight into the future of the WEM and its potential challenges. It presents a confident picture of generation meeting demand over the forecast period, while on the flipside it singles out the massive uptake of rooftop solar PV for causing a significant near-term issue.