Work is underway to study the pricing of frequency deviation in the National Electricity Market (NEM) and the use of a double-sided causer pays (DSCP) mechanism to manage and encourage Primary Frequency Response (PFR) services, which are currently mandated from scheduled and semi-scheduled generators and batteries.

Sponsored by the Australian Energy Council and supported by the Australian Renewable Energy Agency (ARENA) the project is researching and modelling the DSCP approach to providing PFR. It is expected to help policy makers evaluate DSCP alongside other options.

Four reports will be produced to consider double-sided causer pays implementation for frequency deviation pricing (FDP). The first two reports – The Inception Report and Control and Pricing Theory Report – have now been published. Two more reports are planned by the end of October.

The Inception Report sets out how the project will be approached and sets out the intended steps in detail.  The second report outlines the theoretical basis for FDP and how it could be implemented as DSCP.  It also examines some critical implementation issues.

The work is being carried out by well-known expert NEM consultants, Intelligent Energy Systems (IES). IES’ Hugh Bannister is known for having conceived much of the NEM’s existing frequency control ancillary services (FCAS) arrangements.

We have previously looked at how PFR is paid for and the concept of DSCPs. The current detailed and broad assessment of DSCPs stems from an initial investigation by IES, which was sponsored by our Queensland-based member CS Energy.

In summary, a causer-pays approach is already applied to allocate the costs of FCAS regulation services. with market participants assessed every four seconds to see how they are deviating from dispatch targets. If any deviation makes frequency worse a penalty is determined for that participant with any penalties accumulated over a four-week period – in other words those parties with a history of being a causer of frequency deviations are charged. Figure 1 below shows this graphically. 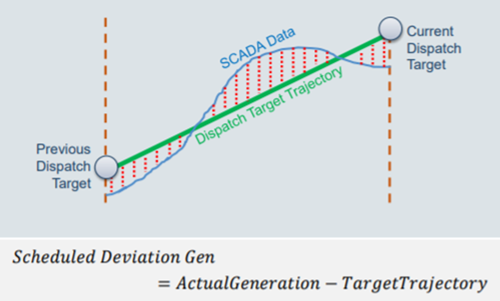 The DSCP approach uses this concept but broadens it out so that there is reward as well as penalty. Participants who make the frequency worse would pay participants who are making the frequency in the system better. The levels are determined by the scale of the deviation and frequency error, and the transaction is resolved in the four second interval rather than during a four-week accumulation.

Generators are currently mandated to provide PFR under a recent rule change, but under the DSCP approach they could instead be rewarded according to their performance, which would create an incentive to perform. A DSCP approach, therefore, has the potential to provide the incentive for PFR voluntarily rather than having it mandated and a quantity specified. It would also encourage newer technologies like battery storage systems, which are a very good source of frequency control, to participate in providing PFR given they would be rewarded for actually delivering this service.

The work underway will look in greater detail at the option and its implications so that policy makers can determine its suitability for future use in the NEM. If it is deemed suitable, it would be appropriate to introduce it in time for the 2023 sunset defined in the current mandatory PFR rule, so that PFR continues to be adequately provided, but on a voluntary basis from those who are most capable of doing so.

The AEC gratefully acknowledges the interest and support of ARENA, the supporting efforts of Iberdrola and CS Energy in providing intellectual input, and finally IES.