We are pleased to publish on our website a new report of an investigation into a promising market mechanism to support Primary Frequency Response (PFR) from generators and batteries[i]. The investigation was sponsored by our Queensland-based generator member, CS Energy, and carried out by well-known technical consultants to the industry, Intelligent Energy Systems (IES)[ii].

Below we explain what PFR is, a recent rule change which obliges its provision, and how IES’ Double-sided Causer Pays concept, if implemented, could result in it being successfully provided voluntarily and more effectively.

What is Primary Frequency Response?

PFR is the control response to restore frequency to 50.00Hz provided at generators, loads and storage attempting to correct locally measured frequency. Classically this is sourced from generator governor action.

Frequency control can be thought of in four timeframes:

2. PFR, where changes in frequency, as soon as they are locally detected by a governor or other form of control, are resisted; and

3. Secondary frequency response, where power system conditions are monitored by the grid operator and Automatic Generator Control (AGC) instructions to control them are sent from the operator’s computers to plants.

4. Scheduling of the energy market through the next 5 minute dispatch interval. 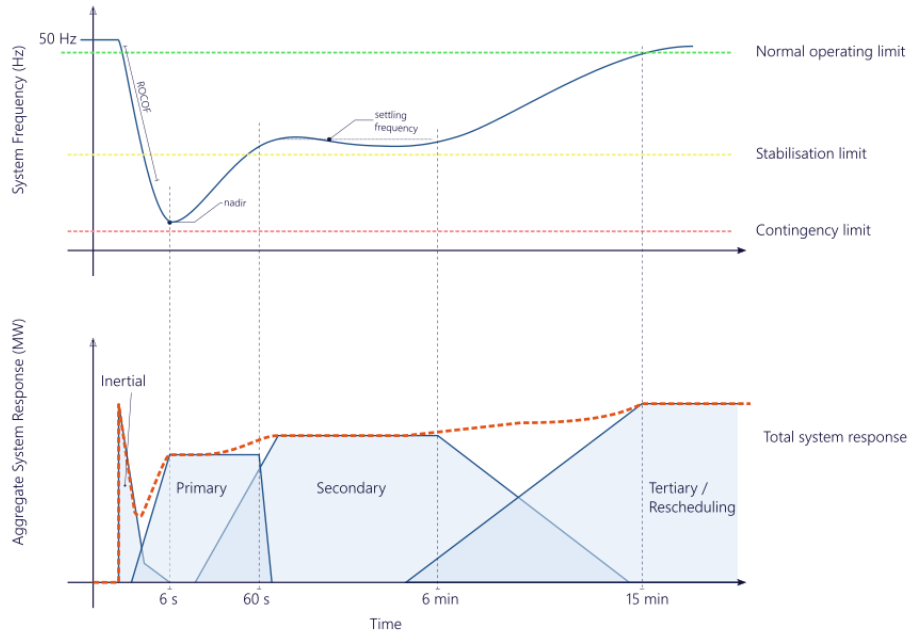 Generally these markets worked well for what they intended to achieve. However, in the last decade there was a noticeable decline in the NEM’s frequency performance as services that were not rewarded by that FCAS market design were withdrawn or retired as legacy plants closed. These are particularly:

2. PFR to correct small-scale deviations quicker than is possible from the secondary frequency response using FCAS Regulation; and,

3. PFR to correct extremely large-scale deviations caused by non-predictable events greater than that which the contingency services are intended to manage.

Since the mid 2010s, AEMO has been concerned about the gradual decline in frequency performance in the “Normal Operating Frequency Band” (NOFB) between 49.85-50.15Hz, caused in their view by the decline in the second group above – a notable gap in the FCAS markets.

Figure 2: Decline in NOFB performance through the 2010’s 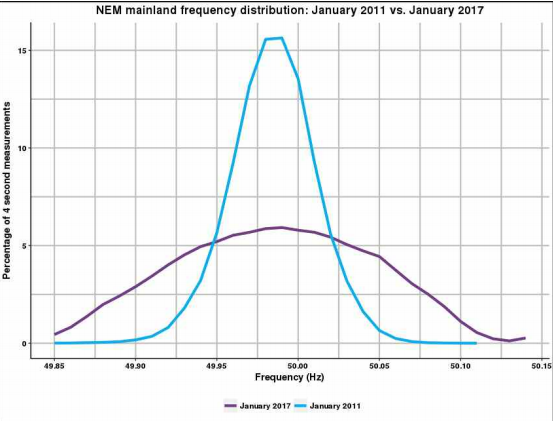 What has been done about it?

This gap was also recognised in the Finkel Report[iii], and, as a result, the Australian Energy Market Commission (AEMC) conducted the Frequency Control Frameworks Review in 2017-2018[iv] to investigate it. In June 2018 it concluded that the issue required resolving, but only after further research and trials were conducted into the best design for procuring PFR.

Two months later, on 25 August 2018, there was a major “non-credible” power system event: the unexpected separation of Queensland and South Australia from the rest of the grid during a time of high interconnector flows. This event was well beyond the design specification of the FCAS contingency services and the frequency outcomes were, in the Austraian Energy Market Operator's (AEMO) opinion, unsafe, which they strongly criticised in their power system event report[v].

AEMO also engaged an international expert[vi] who considered the NEM’s NOFB (small-scale deviation) performance was more serious than had been previously assumed, and recommended that a significant proportion of the fleet should be providing PFR at all times.

At this point AEMO chose to act without waiting for the further research. It desired, urgently, additional PFR to resist both small and large-scale frequency errors. It proposed a rule change to make provision of PFR mandatory from all scheduled and semi-scheduled generators and batteries to their design capacity[vii].

This mandatory PFR requirement is required to be active well inside the NOFB – indeed to any frequency error[viii] beyond 0.015Hz - but also to respond to large disturbances. The rule provides no payment, and since providers’ capability varies greatly, it contrasts greatly with market-based approaches of paying for services according to their value.

AEMC accepted the seriousness of the security concerns and made the rule with effect from June 2020. However they applied a three-year sunset in the hope that a more market-based mechanism can be developed in the meantime.

In submission, AEMO opposed the sunset, as they see mandatory PFR as a permanent solution. Most market participants however feel the rule is short-sighted, as it does not encourage investment in new supply and the rule does not (and could not reasonably) impose quality standards on the mandatory PFR. In particular, it has no obligation for the PFR to be supported by stored energy. For example, it does not require a solar farm to operate below the available sunshine in order to have an ability to increase during low frequency.

AEMO were clearly unhappy with the frequency performance on 25 August 2018 and expect better outcomes even during such extreme events. However that event was “non-credible” meaning it was beyond the level of events that power systems are designed and operated to survive.

If a secure outcome is desired in the aftermath of, effectively, any possible event, then this presents a dilemma for the design of any market mechanism. Markets typically require an outcome objective to be specified. For example, the FCAS markets were designed to recruit (at least cost) services to meet, and only meet, the NEM’s Frequency Operating Standards. These standards specify acceptable outcomes to a pre-defined range of events.

The IES approach detailed in its report approaches this problem in a novel way that does not necessarily require a desired outcome to be specified. Instead it borrows a concept from the existing “causer-pays” technique that is used to determine how to allocate the cost of the FCAS Regulation services[ix]. In this system participants are assessed every four seconds to see how they are deviating from dispatch target trajectories. 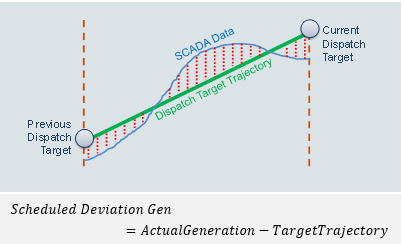 In the existing Causer Pays approach, if participants deviate from their dispatch trajectory in a way that makes the frequency worse (i.e. they are below target when the frequency is low, or vice versa), then a penalty is determined for the participant. The penalty is the product of the volume of the deviation and the size of the frequency error measured during that four second interval.

These penalties are then accumulated over four weeks. Participants then must fund AEMO’s FCAS regulation costs in the following four weeks’ in proportion to the size of the penalty they previously accrued.

The logic of this allocation is that it charges those who “caused” the deviations that created the need for the FCAS regulation service in the first place. There are obvious limitations to that existing arrangement, such as:

The IES approach uses the causer pays concept, but without the two limitations above. It expressly detects all deviations from dispatch target every four seconds. Those participants who are making the frequency worse (i.e. the penalty described above) pay those participants who are making the frequency better. Again the quantities are a product of the deviation and frequency error, but the transaction is resolved in the four second interval, i.e. there is no four week accumulation.

This way, generators mandated by the new rule to provide PFR can be rewarded in accordance to their actual observed performance, thereby creating an incentive to perform.

Note that unscheduled demand, forecast by AEMO, also contributes to the frequency error. AEMO’s demand forecast is effectively a “dispatch target” and to the extent actual demand varies from it, this affects frequency in the same way as a generator missing its target. In both the existing process and IES’ approach, demand is treated the same way as a generator. Demand causer-pays costs (or possibly rewards) are passed on to customers as a class.

But having worked out the volume of causer pays or causer support, there is the key question of what price to apply to these volumes – there is no obvious value to draw upon. IES recommends using a centrally determined estimate of the opportunity costs of supporting frequency from a standard thermal generator. Another approach is to use the price of the FCAS Regulation market as a proxy of the value of frequency correction.

In order to demonstrate the capacity to do these calculations, IES has performed detailed analysis of real four-second data on some test units which shows promising early results. 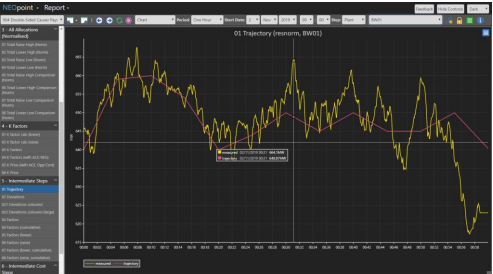 There are some real attractions of this approach because, unlike the existing FCAS markets, the settlement system can be introduced without requiring any new outcome objectives: AEMO does not have to specify a quantity of PFR to be procured. This means it can automatically operate in the background whilst the mandatory rule is in place. It is likely that during the mandatory rule frequency will tend to operate closer to 50.00Hz than it has previously, so the deviations payments would presumably be small: a consequence of the obligation forcing an oversupply of PFR.

However if implemented, such a scheme could provide the incentive for much of the PFR to voluntarily continue to be provided after the obligation sunsets in 2023. If large quantities of PFR withdraws and the frequency becomes volatile, then the value of PFR would automatically go up, encouraging PFR to be restored.

And, by 2023, battery storage capacity will have grown substantially, which is an excellent source of frequency control, and an incentive like IES’ would encourage those new services to participate in providing PFR and be justly rewarded.

The AEC is indebted to CS Energy for investing in this valuable research and for graciously sharing the insights with a view to a more effective way of managing frequency control.

[iii] Commonwealth of Australia, Independent Review into the Future Security of the National Electricity Market – Blueprint for the Future, June 2017

[viii] “Frequency Error” here means the (absolute) variation of the frequency from 50.00Hz