Hydrogen is currently enjoying extraordinary political and business momentum, with the number of policies, national plans and projects growing.

The Federal Government announced support for hydrogen hubs and has previously released a National Hydrogen Strategy. While the Opposition has also released its own Hydrogen Plan. Hydrogen technology is being embraced around the world with expectations it can be produced from renewable energy sources.

With gas-fired generation expected to remain an important part of the generation mix, interest in the use of hydrogen in gas turbines is increasing given its lack of carbon emissions. Many manufacturers have already developed turbines that can handle a blend of hydrogen and natural gas and are pursuing development of turbines that can run on 100 per cent hydrogen.

Locally, Twiggy Forrest has announced a proposal to develop a 850-1000MW hydrogen power station in Port Kembla through Squadron Energy. Initially with a 30 per cent hydrogen mix the ultimate ambition is to move to 100 per cent hydrogen.

But how straight forward is it to use hydrogen for power plant operations?

There are integrated gasification combined cycle plants in commercial operation that use syngas with various volumes of hydrogen in the mix, albeit relatively small. And there is a lot of work underway to develop large scale turbines capable of running with a high hydrogen mix[i] given its cleaner burning properties. But challenges remain.

According to a Hydrogen Council report baseload supply hydrogen will only be relevant in “regions constrained in renewables potential and situations where alternatives like fossil fuels with direct CCS or biomass … are not an option”. Where hydrogen is imported to use in turbines, power produced could cost $140/MWh. The economics of hydrogen gas turbines are better if units provide short-term multi-hour balancing (peaking plants), or multi-day/week generation paired with combined cycle generation when renewable generation is low: “In this way, hydrogen can act as a buffer and long-term storage option for the power system”.[ii]

The report also noted that hydrogen generation from low-cost renewables at $25/MWh with a capacity factor of 50 per cent, yields a cost of $1.70/kg of hydrogen produced.Storing underground it estimates would be $0.30/kg. The resulting cost to generate power is estimated at $100-$200/MWh depending on the type of gas plant (CCGT, peaking). But, it argues, if 100 per cent hydrogen can be proven, the capital cost could “rival that of natural gas turbines by 2030”. The estimates and timing seem optimistic and would require significant cost reductions from today. The Federal Government’s long-term and stretch target is for hydrogen at $2/kg, while ARENA forecasts that to achieve the target, electrolyser costs will need to fall from between $2-$3 million per megawatt to $500,000 per megawatt and the cost of electricity from solar and wind would need to nearly halve from today’s levels[iii].

To refit existing gas generators, if achievable, would involve considerable reconfiguration of many elements of the plant as shown in figure 1 below, but would involve changes to the turbine, the gas combustion system, and supply and safety systems. 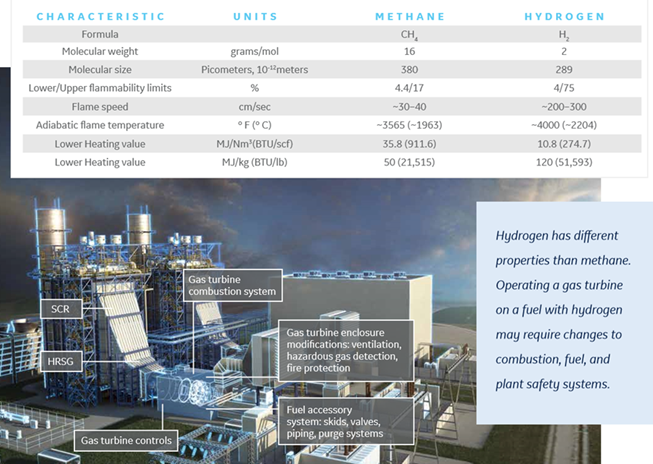 A key objective in introducing hydrogen to the gas mix is its lack of carbon emissions. But introducing 30 per cent hydrogen does not lead to an equivalent drop in emissions – 30 per cent hydrogen by volume would produce a 10 per cent improvement for gas-fired turbines. While hydrogen is effectively zero emissions, it has a greater volume than the same mass of natural gas – an estimated three times the volume to produce the same energy as natural gas[iv].

A 50 per cent drop in carbon emissions would need an estimated 75 per cent hydrogen fuel blend (figure 2). Modern combined cycle gas (CCGT) turbine plant running on natural gas will have a carbon emissions intensity of around 305-380 g/kWh, depending on the efficiency[v]. 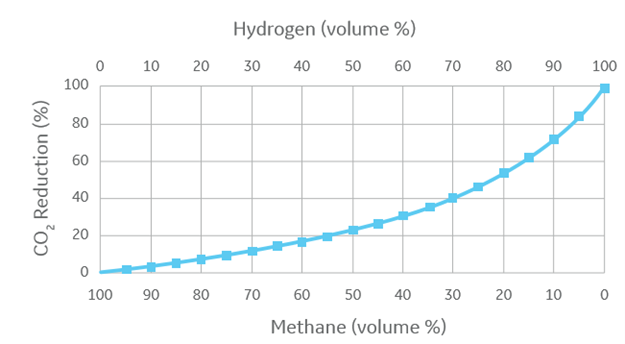 And while it emits no carbon dioxide, hydrogen is also more difficult to handle in a generator setting because it highly combustible and has a broad combustion range, is harder to contain than natural gas, can lead to embrittlement of metals in turbines and produces increased amounts of NOx.

At 50 per cent hydrogen NOx emissions could be more than a third higher and, according to GE, could potentially double when operating at or near 100 per cent, so would require mitigation measures. NOx is a potent greenhouse gas, but more critically, is a major cause of photochemical smog.

Technically it is feasible to use 100 per cent hydrogen but the challenges associated with increasing volumes of hydrogen in a power plants fuel mix, include flashback (where the flame inside the combustor travels back up to incoming fuel), combustion pressure fluctuation and increased NOx.

Regardless of the hurdles, there is a significant amount of work underway to address these challenges by a range of companies with the aim of developing a flexible and dispatchable power source:

Siemens Energy’s large gas turbines, from the SGT5-2000E to SGT5/6-9000HL, are capable of running on up to 30 per cent hydrogen by volume again with plans to increase the capabilities to burn hydrogen in the mid and long-term.

Mitsubishi Power has developed turbines that can operate with a mix of 30 per cent hydrogen and 70 per cent natural gas with the aim of moving to 100 per cent.

GE’s 384 MW 7HA.02 combustion turbine, which can burn between 15-20 per cent hydrogen by volume, is being used at the Long Ridge Energy Terminal, a 485 MW combined cycle power plant in Ohio, that will transition to run on hydrogen later this year. The plant is the first purpose-built hydrogen plant in the U.S.

Kawasaki Heavy Industries has been running a hydrogen demonstration project at Kobe, Japan. It demonstrated a 1MW gas turbine could burn 100 per cent hydrogen.

Capstone Turbines has developed microturbines of between 30kw and 1MW as a distributed generation energy source to be easily installed at the source of hydrogen generation, without the need for infrastructure. Capstone sold its first hydrogen C65 last year in Australia to Optimal for Jemena’s Western Sydney Green Gas Project.

[i] Claims of some plants already operating at high levels, such as a cogeneration plant at Samsung’s Daesan industrial complex in South Korea which uses byproduct gas with up to 95 per cent hydrogen