A great deal has now been written about the early closure of Yallourn Power Station in 2028, with many commentators outlining the potential implications for Victoria and the broader National Electricity Market (NEM) of coal plant closures.

Australia has added, on average, more than 6GW of renewable capacity each year since 2018. This “super cycle” of investment is reshaping Australia’s electricity sector.

Renewable developments are further encouraged by state-based renewable  targets. These include:

The states have shown a strong appetite to go-it-alone, initially fuelled by the absence of agreement on national climate and energy policy. The potential consequences of this state-by-state approach in terms of the NEM’s overall supply and demand has been highlighted by the work of energy analysts and researchers, Cornwall Insight Australia. They have produced the below graph to illustrate the potential excess supply resulting from meeting the state-based renewable targets. 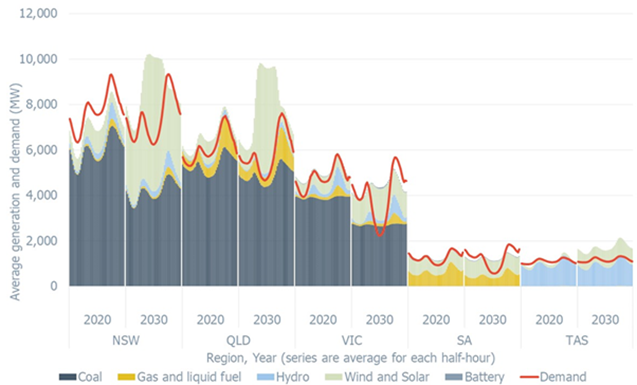 Notes: Time-of-day average generation profile in 2020 versus 2030. Additional renewable capacity needed for the states’ 2030 targets has then been added while the coal and gas plants that are forecast to retire based on Australian Energy Market Operator (AEMO) data have been removed (the recent Yallourn closure announcement is captured here). The average shape for each fuel type is constant. The future demand pattern is based on AEMO’s central forecast for 2030.

Cornwall[i] estimates that by reaching the state-based targets across the NEM there will be nearly 12GW of excess generation waiting to be used in the middle of the average day – with each region having more supply than demand as solar generation hits its peak.

Batteries are touted as one answer. There is a significant volume of battery storage proposals being put forward (see previous EnergyInsider, Big Battery Bonanza). Up to 7GW of batteries have been proposed, but it is not clear if all will proceed, with some projects also requiring government support to reach finalisation. Even assuming all these batteries are built, along with the 2GW of pumped storage from Snowy 2.0, there would still be a shortfall in its capacity to soak up the projected supply.

The Australian Energy Market Operator in its most recent Integrated System Plan (2020) estimated up to 19GW of new dispatchable resources will be needed by 2040 to firm up distributed and utility-scale renewable generation.

Transmission links can help, but as highlighted by Cornwall Insight’s analysis, this may not be the case in the middle of the day when all regions may have excess supply and be looking to export electricity.

On the surface negative pricing might seem like a good thing, but as noted in our EnergyInsider, Dropping demand and plunging prices – can you have too much of a good thing? it is not clear cut, and it increases investor risks.

New large-scale solar and wind are estimated to need to realise average prices over $50/MWh to recover their capital costs. And for investors who moved early and locked in positions when renewable technology costs and interest rates were higher, they need to realise considerably higher prices again.

Wind and large-solar can readily spill generation, which should happen before prices get much below $zero/MWh. However poorly written contractual arrangements can lead to these generators remaining at full output, while the counterparty (potentially a state government) pays the negative price which can go all the way to -$1,000/MWh.

Cornwall Insights argues that to get more from the renewable capacity that is being installed there may be merit in a greater coordination, with states focussing on their comparative advantages:

“For example, rather than focusing on generating more green energy within their own borders, states with better pumped hydro resources could build more of those, which could help manage not just their own, but their neighbour’s excess energy as well. This in turn might support more renewable generation across the whole NEM.”

This perspective, it notes, was the original premise of the NEM “to promote long-term consumer interests through better trade and coordination”[ii].

The task confronting the Energy Security Board is to design a post-2025 grid. The answer to managing the new grid is likely to be a combination of renewables, storage with different durations, transmission links and fast-start gas generators. But to ensure the reliability and resilience of the NEM (and that more advantage can be taken of lower emissions generation) it will require a greater level of coordination than is currently the case.

[i] When less could be more – on the state’s green targets, Franklin Liu, Senior Policy and Regulatory Consultant, Cornwall Insight Australia, 11 March 2021