The way 2021 has started, you could be forgiven for thinking it is the year of the big battery. Last week plans for the “world’s largest battery” (1200MW) were unveiled for New South Wales’ Hunter Valley by CEP Energy, while Meridian Energy also announced a battery energy storage system (BESS) to be co-located with the Hume Hydro Power Station.

These are just the latest in a series of battery project announcements, which include a four-hour 700MW/2800MWh battery planned by Origin Energy at its Eraring power station site, and AGL Energy’s plans for up to 1000MW of grid-scale batteries with Wartsila and Fluence entering agreements to supply the storage.

AGL’s battery plans include a 200MW BESS at the Loy Yang A power station and a 250MW battery at Torrens Island and further projects at Broken Hill, Wandoan, Sunraysia and Dalyrmple.

Origin has already submitted plans to build a two-stage, 300 MW solar and battery storage project near Morgan in South Australia and has also outlined plans to install batteries at three of its biggest gas power plants – up to 300MW/450MWh at Mortlake in Victoria, up to 200MW at Uranquinty in New South Wales, and another at Darling Downs in Queensland.

At the same time, Neoen is planning a 500MW/1000MWh battery project at the site of the decommissioned Wallerawang power station in NSW, elsewhere Neoen is building a 300MW battery near Geelong in Victoria.

While it is still unclear if CEP’s Kurri Kurri battery proposal will reach a financial close (targeted for the first quarter 2022) or how many hours of storage it will provide, it is further confirmation of an impetus to develop new large-scale batteries.

Governments are providing part of that impetus through proposals such as NSW’s plan to incentivise 12GW of renewables with wind and solar farms to be built in regional renewable energy zones.

The project proposals are also being encouraged by the ongoing strong growth in renewables. The Clean Energy Regulator’s data for last year confirms the ongoing and rapid growth of renewables with 3.9GW large scale renewables accredited in 2020, alongside 2.6GW of rooftop solar capacity. This 7GW of renewable capacity follows 6.3GW a year earlier.

With increased renewable capacity in the National Electricity Market (NEM) comes continued debate about how best to balance the intermittent nature of the supply, particularly as we get closer to the retirement of coal-fired plants. It will require flexible technologies which can be dispatched over different time periods to match the power system’s needs. These technologies include pumped hydro, large-scale battery storage, distributed batteries, virtual power plants and fast start gas generation. Storage will charge with excess energy from renewable generation for dispatch at times of high demand and/or low supply, and, in South Australia during the last quarter of 2020, would have even been paid to do so for 17 per cent of the time.

The Australian Energy Market Operator (AEMO) in its 2020 Integrated System Plan (ISP) estimated 6-19GW of new dispatchable resources will be needed by 2040 to firm up distributed and utility-scale renewable generation.

A BESS can be used for a range of network services, including energy market participation, load shifting, market and non-market ancillary services (in particular, frequency control ancillary services (FCAS)), and cost mitigation, to avoid or reduce network upgrades, demand charges, and fuel costs. Utility-scale energy storage can shift the timing of renewable energy production, reduce the number of new interconnectors, and provide firming support at times of peak demand or low renewable availability.

Grid-connected batteries installed within the past couple of years range from residential systems to the 100MW/129MWh Hornsdale Power Reserve system, which has had a 50MW/64.5MWh expansion. According to Aurecon, generally large-scale batteries have been installed with less than two hours’ energy storage but as battery prices continue to fall (they estimate a 50 per cent fall has occurred over the past three years[i]) and with wholesale prices shifting with increasing penetration of variable renewable energy, there is likely to be more incentive to construct grid-scale batteries with more storage.

The upfront investment costs are large. Unlike traditional generation sources, battery costs mostly arise from the stored energy volume (MWh) rather than the capacity (MW): hence to date batteries have been “shallow” i.e. they will empty quickly if run at full capacity. This has given batteries a different niche in the market to date than conventional peaking generation. A gas peaker for example may take 15 minutes to start but can then run indefinitely. Shallow batteries on the other hand can respond instantly but cannot run for an entire hot afternoon. The market is benefiting from having a mix of resources filling different roles.

However, falls in capital costs of batteries are happening and expected to continue. In its latest estimates the US’s National Renewable Energy Laboratory is projecting that battery storage costs will fall by between 26 and 63 per cent by 2030 and by 44-78 per cent by 2050 based on a starting point of USD380/kWh[ii]. The projections are based on a four-hour lithium-ion battery, with a 15-year life.

The most recent GenCost[iii] (a collaboration between the CSIRO and AEMO which provides an annual update of electricity generation and storage costs) shows battery capital costs have fallen from $1964/kW to $1783/kW and from $491/kWh to $446/kWh as shown in figures 1 and 2 below. 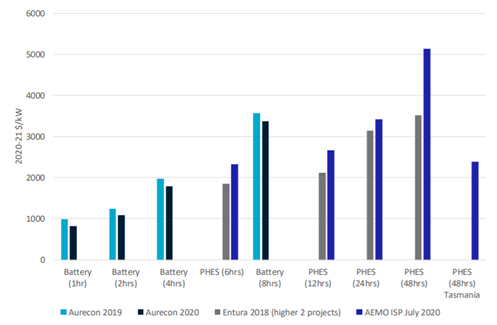 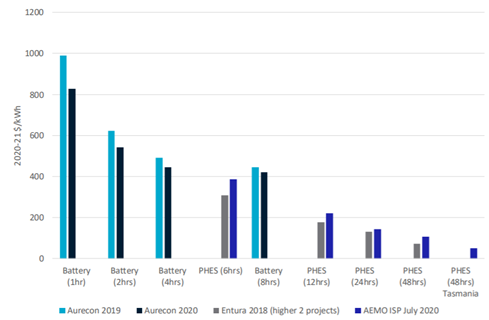 Capital costs are provided on a total cost basis for various durations of battery and pumped hydro energy storage (PHES) in $/kW and $/kWh. Total cost basis means that the costs are calculated by taking the total project costs divided by the capacity in kW or KWh.

By way of comparison, Aurecon estimates a 25MW capacity battery project with 100MWh of storage would cost $44 million, while a 258MW open-cycle gas turbine (OCGT) plant would cost $317 million (around $1250/kW). You can see the detailed analysis in their Costs and Technical Parameters Review for AEMO.

Gas-fired peaking plants as well as batteries can both play a role in dealing with peak demand. The competitive position for gas generation depends on its fuel cost as well as likely future gas prices, while future climate policies are likely to be a factor.

Analysis in AEMO’s 2020 ISP showed that at relatively low gas prices a four-hour battery installed at $1964/kW capital cost would need to be charged free to be competitive with a new open cycle gas turbine plant (a peaking plant) with an estimated cost of $1416/kW[iv].

The challenge emerges for gas-plants when battery costs reduce – AEMO calculates that if battery capital costs are $922/kW by 2030 gas prices would need to be as low as $4/GJ in the long run, while battery charging costs would need to remain fairly high at $230/MWh. It notes that in 2019-20, four-hour batteries could have charged at an average price below $30/MWh in all regions, except NSW.

AEMO’s report for the fourth quarter of 2020 shows batteries getting most of their revenue to date through Frequency Control Ancillary Services (FCAS). During Q4 2020, NEM net battery revenue was $9.7 million, with FCAS markets being the largest contributor (79 per cent of the total). 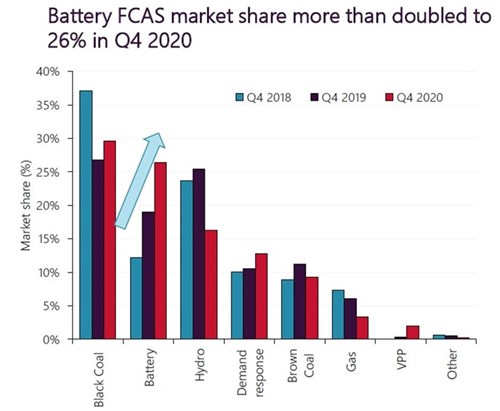 While battery net revenue in Q4 2020 decreased from Q4 2019, there was an increase of $3.5 million compared to Q3 2020. AEMO notes this rise was driven by FCAS revenue due to increased average enablement from Hornsdale Power Reserve following its expansion; an increase in energy revenue driven by a rise in South Australian battery dispatch; and volume-weighted average energy arbitrage value (from $30/MWh to $39/MWh). However, it is key to note as a small market, and with new batteries coming online, it is also expected to be quickly oversupplied - so this revenue cannot be relied upon in future.

Whole of life cost will be a key factor for potential investment decisions. Gas-fired generation has the advantage based on current gas and battery cost, but AEMO notes that in the 2030s when significant investment in new dispatchable capacity is needed, this advantage could shift to batteries, especially two- and four-hour batteries. Its 2020 ISP assumes batteries become more cost-effective than gas-fired plant in the 2030s, although new flexible gas generators could still play a greater role if gas prices are materially reduced.

The ISP assumes that as more coal-fired generation retires, and is replaced by renewable generation, production from existing gas-fired power plants will rise because it is expected to be more cost-effective to compensate for low-renewable conditions than to invest in new deeper storages. Combined-cycle gas turbines (CCGTs) and OCGTs can play complementary roles with CCGTs providing longer firming and OCGTs covering peak demand or low supply periods.