We’re used to bad news about South Australian electricity prices, and commentators have welcomed the rare result of its quarterly average spot price being the lowest in the NEM. Perhaps customers are benefiting from the long-awaited price suppression effects of renewable energy generation? But when you dig deeper, the story behind the average price in Q4 2020 is not all good news.

So, what’s the market telling us? We take a look…

Average operational (grid) demand in the NEM has been declining steadily since 2010 (figure 1). AEMO attributes 2020’s significant drop to a record uptake of distributed PV and mild weather conditions. 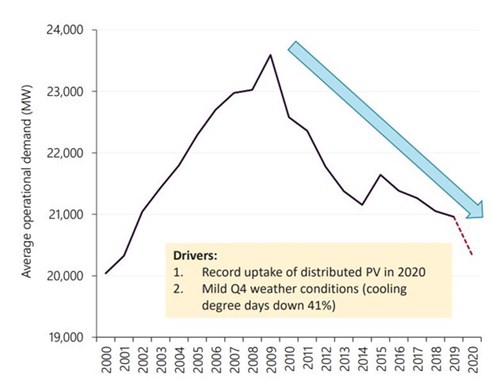 Last year’s record uptake of distributed PV was driven by more people working from home during 2020 and the declining costs of residential solar PV. Milder weather conditions during Q4, particularly in South Australia and Victoria, also contributed to the drop in demand. Cooling degree days - i.e. the days when air conditioners are turned on – experienced a drop of 41 per cent.

Discussed in our latest Solar Report, both Victoria and South Australia hit record low operational demands (demand drawn from grid) during the fourth quarter, which are falling at an astonishing rate.

At one time (figure 2), South Australia solar generation exceeded all consumption, a world-first for a region of its size. 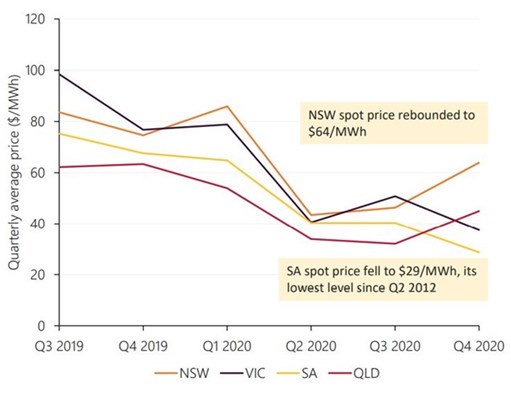 Futures prices (figure 4) have fallen in Victoria and South Australia, but not as dramatically as the spot. Very big falls occurred a year earlier, following large falls in the price of gas. 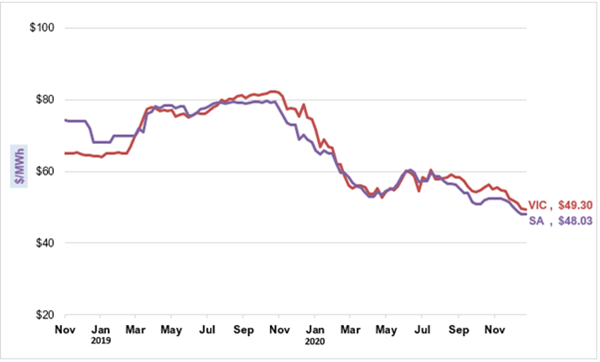 Negative and zero spot prices occurred in 7 per cent of all trading intervals across the NEM during Q4 2020, surpassing the previous record set in Q3 2020 (4.6 per cent).

Shown in figure 6, with a combined large fleet of wind generators and rooftop PV, South Australia and Victoria’s spot prices drop to negative anytime throughout the day. Queensland also experienced a high degree of negative and zero prices, mainly occurring between mid-morning until mid-afternoon, due to the dominance of solar.

Figure 6: Number of occurrences of negative and zero spot prices in Q4 2020 in the mainland states 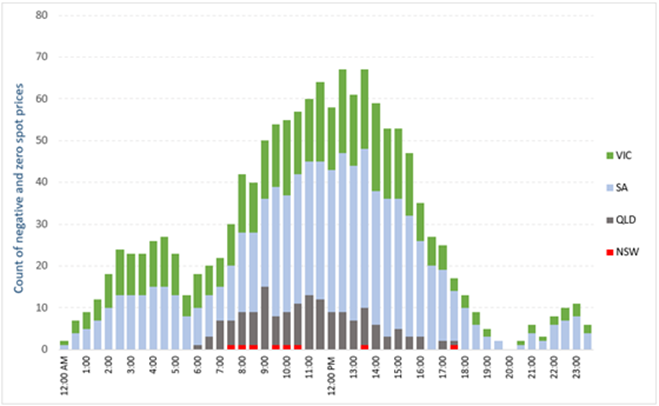 Negative prices imply that all the generation offered at positive prices has been dispatched off, and AEMO is having to dispatch down generators offered below zero $/MWh. These generators will actually pay customers for the privilege of staying on-line.

The NEM design allows negative prices to create an incentive to cycle thermal generators off and on. Thermal generators have a minimum on-line loading level - kind of like an idle speed in a car - and are prepared to even pay to stay on to avoid having to shut down and restart.

But in 2020, the bulk of generation offered at negative prices in South Australia were wind and large-scale solar, which have no such inflexibilities. And, while wind and sun are free, they are not negative cost, so why do these generators bid this way?

Some are affected by legacy contractual arrangements: the party paying AEMO to take the negative priced generation is not the one entering the bids. It is also due to Renewable Energy Target (RET) subsidies. The generators are accredited Large Generation Certificates (LGCs) for every MWh they produce, this means that it is worthwhile generating as long as the price exceeds the negative of the current LGC price.

Customers paying in other ways

So, being paid to consume energy for much of the time must be good for customers? Not necessarily:

First: It takes time for the effects of the fall in the spot price to be reflected in the contracts price, and then ultimately in the retail price.

Second: The hedging contracts presented in figure 4 apply only to flat load customers – like a large industrial customer – and their retail contracts would over time follow this trend down. Customers with peaky loads and/or behind the meter solar would however require more a complicated hedging strategy and may not benefit.

Third: The subsidies paid to renewables through the RET, which leads to them setting negative prices, are themselves recovered from customers. In effect, generators are paying customers in order to obtain subsidies from those same customers!

Fourth: During periods of low prices thermal generation wants to shut down, but to maintain system security AEMO directs certain thermal generators to continue operating to provide certain grid services. Fortunately AEMO compensates these directed generators who would otherwise be paying to stay on line. And the compensation increases as spot prices go more negative.

AEMO notes that there has been increasing out-of-market costs to keep the system secure.  Total NEM system costs increased slightly compared to recent quarters, rising from $55 million in Q3 2020 to $77 million in Q4 2020.

In South Australia, falling wholesale electricity prices have been met with rising out-of-market costs. AEMO states, in 2020, costs associated with directing South Australian GPGs for system strength increased to $49 million (or $4/MWh), 91 per cent higher than in 2019.

In Q4 alone, the cost of directing South Australian units to maintain system security increased to almost $16 million; with South Australian generators’ time on directions hitting a record quarterly high of 64 per cent (previous record set in Q2 2018, 45 per cent) (figure 7). These costs are recovered from South Australian customers.

Figure 7: Time and cost of system security directions (energy only) in South Australia

AEMO expect these directions to fall with the commissioning of four synchronous condensers by the middle of 2021. So, rather than compensating directed generators, South Australian customers will instead repay the $166m capital cost of the synchronous condensers themselves, as part of the local transmission system.

Looking further into the future, these periods of surplus South Australian renewable energy contribute to the justification of the large new interconnector with NSW: Project EnergyConnect. Whilst it will allow more efficient sharing of surplus energy, its $2.4bn capital cost will however be recovered from South Australian and NSW customers.

Electricity is a commodity market where supply and demand must continually match. Prices reflect all generators in the NEM, and therefore they act as an indicator of demand and supply behaviours in the market – and just as high prices show an undersupply of electricity, negative prices, can appropriately signal a problematic supply surplus. But they can also reflect certain distortions unrelated to the physical situation, which in turn are add other customer costs, such as increasing directed generator compensation. 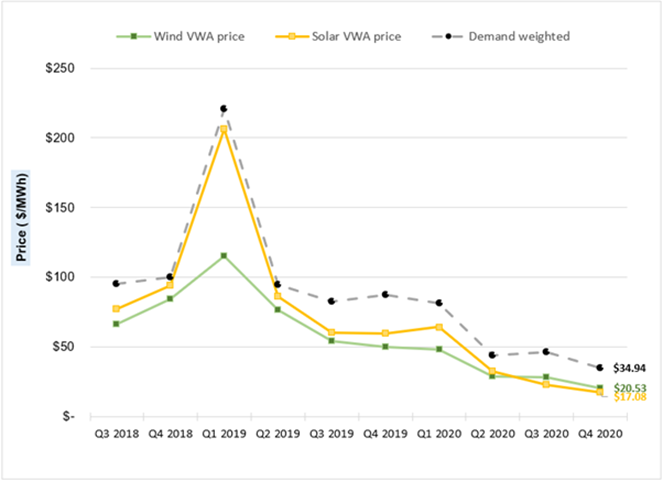 The volume-weighted price is the most relevant indicator with respect to supplying the “average” customer. The operational demand-weighted price sits 21 per cent above the simple time-weighted average because the periods of low/negative price coincide with low grid demands. And as can be seen from the extreme price in early 2019, this price is very sensitive to periodic heatwaves that were absent in Q4 2020. Futures prices must consider the risk of the return of such extremes.

The solar and wind-weighted average (i.e. the average spot market revenue achieved by these plants at the time they operated) were very low at $17.08/MWh and $20.53/MWh respectively. This is entirely appropriate given the market conditions but is well below what investors need. The shortfall is presently partly made-up by the sale of LGCs, however these will decline toward zero over the next few years with fulfilment of the RET.

It is not surprising that rather than taking market risk, developers are attracted to the growing numbers of state underwriting schemes. In these the state becomes the risk-taking investor and will make up future shortfalls (or more correctly the taxpayers or customers in turn underwriting them).