Victoria’s Essential Services Commission (ESC) this week released its latest Victorian Energy Market Report which focused heavily on what it described as the “striking consumer preference” for large energy retailers. In doing so it noted that customers may not be getting the lowest price in the market and attempted to discern customer motivations.

The report says the preference for larger retailers “suggests there may be opportunities to further build consumer confidence and trust to engage in the market as a whole, ensuring that the energy market delivers positive outcomes for consumers” and argues one way it works to build trust is via enforcement.

New enforcement powers were introduced in 2016[i] and as the ESC notes it has been building its enforcement and compliance capabilities over the past two years and has increased its enforcement action , while also taking some of its strongest action in the past year. There have also been a range of interventions (an estimated 34 in the retail market since 2010) to try and improve customer outcomes. These interventions add to retailer costs and the Australian Energy Market Commission (AEMC) is forecasting these will increase over the next three years.

The outcomes found in the ESC report would suggest enforcement and interventions have not really been an answer to encouraging greater market engagement. In fact the ESC data, along with a freshly released assessment from the Australian Energy Regulator (AER), suggest the market is actually delivering positive outcomes for consumers; as does Energy Consumers Australia (ECA) consumer sentiment tracking. Below we take a closer look at the ESC report.

Victoria’s retail market remains highly competitive with more than 30 retailers, while the market share of large retailers has fallen over the past 12 years, and the consumer preference for larger retailers does not seem to have been an impediment to a range of retailers coming into and remaining in the market. 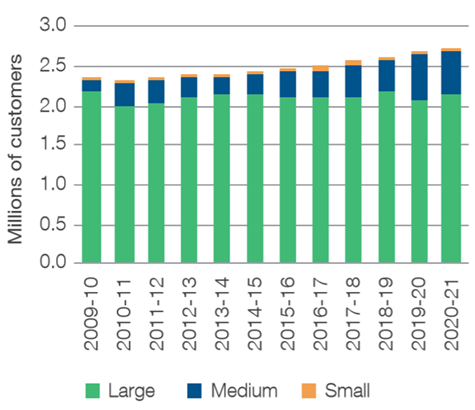 In terms of outcomes, the representative annual bill in Victoria is $1132 (based on the median residential market offer), amongst the lowest in Australia and representing a fall of 11.4 per cent in 2020-21[ii]. The AER has also highlighted the reduction in power bills which has led to improved affordability since 2017-2018 - 0.5 per cent less disposable income is needed to meet typical household electricity bills compared to the previous year with significant savings available for customers prepared to seek out deals.

Meanwhile, the AEMC expects annual residential bills in Victoria to fall by 8 per cent over the next three years, which include lower retail costs for most jurisdictions, but not Victoria. While the AEMC expects Victorian residential bills to fall by $99 over the reporting period, retail costs are expected to increase from $112 to $196. The additional costs of regulatory requirements placed on retailers as a result of interventions in the state compared to retailers operating in other NEM regions will be reflected in these costs. 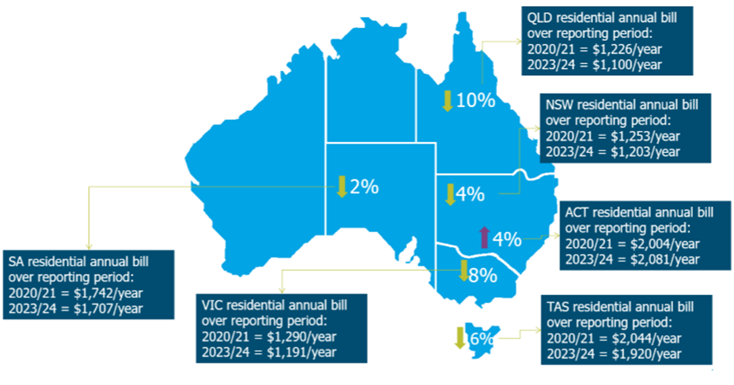 We have previously looked at the improvement in consumer sentiment towards their energy provider. In brief the ECA sentiment tracking shows customer satisfaction with energy retailers is high and have been growing (as shown in figure 3 below), while there is also increasing confidence in the energy market.

The vast majority of customers now see electricity as value for money and that sentiment has been steadily growing since the end of 2017. When considered against other similar household service sectors, electricity and gas are now comparable with telecommunications (mobile phones and internet), insurance, banking and water in their perceived value for money. 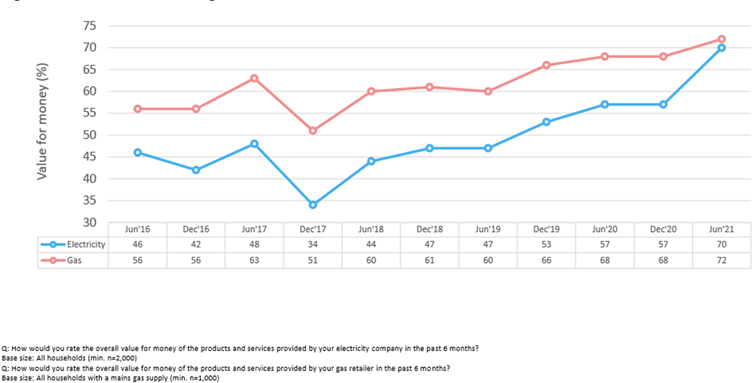 The ECA sentiment survey also found a vast majority of customers are satisfied with the overall customer service and electricity supply they receive.

Since July 2019 each Victorian customer’s bill alerts them to whether that household is on the best available offer from that provider, yet a significant percentage are not on their retailers’ best offer. All of this points to price being only one element in a customer’s decision making.

The ESC commissioned research into what factors may be driving consumer choice of retailer and this pointed to:

On this last point, other spurs to consider a change in retailer may be a major increase in price (which has not occurred in recent years) or a poor experience with a provider.

The ESC report offers some further insights into what it believes may be driving customer actions, including:

The ESC’s report notes that a customer’s decision to switch retailer may not always lead to the lowest possible price. The AER report also considers switching rates, which can offer an indication of customer engagement, but notes these don’t provide a full picture:

“For example, switching may be low in a competitive market if retailers deliver good-quality, low-priced services that give customers no reason to change. Customers might engage with the market and decide to stay with their current plan or might change energy plans with the same retailer. This data does not capture movement from one offer to another while staying at the same retailer.”

AER data shows switching rates starting to increase across all jurisdictions in 2020-21 with the spike in Q4 driven by AGL’s acquisition of Amaysim Energy, see figure 6. 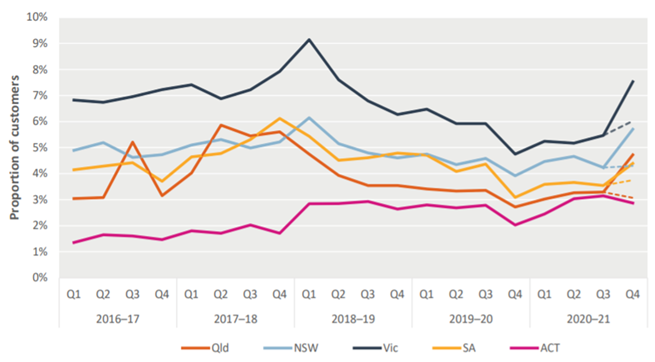 Note: Dashed lines show what the rate would have been if the AGL acquisition of Amaysim did not occur. Source: AER

As can be seen, Victoria continues to enjoy the highest switching rates in the mainland National Electricity Market (NEM) jurisdictions, which suggests there is ongoing awareness of competitive offers and engagement with the market. The peak in switching coincided with consumer engagement programs in some jurisdictions in 2018, including the Victorian Government’s $50 Power Saving Bonus, according to the AER. There was also heightened media coverage of high energy prices in mid-2018, which may encourage more customers to seek a better energy plan. Conversely, more recently media coverage has been based on energy prices falling and default market offers which may disincentivise some customers to look for alternative offers and support the perception they are on a reasonable energy plan.

Separately, the ESC looked at the experience of 40 consumers looking for a new energy plan and reports most participants found the process of comparing plans complex and felt overwhelmed by the offers available. This may be the perception, but comparing plans is simple and requires limited time using government comparison websites such as Victorian Energy Compare and we have recently released an animation to guide customers through the steps and illustrate how quickly this can be done.

The ESC commissioned research found the cheapest plan was not always seen as the best option with brand awareness and going with a known company a factor. This is not unique to energy.

One of the biggest interventions aimed at improving customer outcomes has been the re-regulation of prices through the Victorian Default Offer (VDO). While the VDO is intended to represent a simple, trusted, and reasonably priced electricity option it can also limit the ability of retailers to offer more competitive market offers. The Australian Energy Council considers that in its three years of operation, the VDO has actually dampened price signals in the market, and limited incentives for consumers to shop around and seek out the cheapest energy deals. Large retailers will have a greater number of customers on the VDO.

The price caps set by the VDO and the AER’s default market offer also risk encouraging complacency when they are touted as a safety net for consumers. Equally media and political commentary of the ongoing decline in electricity costs – both wholesale and retail – may feed the complacency for many customers and a perception that they are already on a good deal.

The ESC argues that “going forward actions that help increase customers’ confidence and trust across all energy offer options will support access to the most competitive energy prices in the market” and seems to believe that more rigorous compliance and enforcement action will be a  key way to improving trust in the market. The increased noise around enforcement and the need to rein in perceived bad behaviour also runs the risk of helping create more concerns about the functioning of the market rather than build trust. A proactive campaign by the ESC encouraging customers to engage in a market that is set up to benefit customers, rather than loud messaging that the market can’t be trusted may see customers participate more effectively.

While price is a major factor, clearly consumer choice is more than just the lowest price. The biggest spurs for customers to switch are likely to include price rises, a price shock on a bill, or if service level drops.

Switching and a seeming preference for larger retailers may simply reflect the fact that even in a highly competitive market like Victoria’s if retailers deliver good quality, reasonably priced services there is less motivation for a customer to change provider. The important thing is that there continues to be retailer options available to consumers and that regulatory interventions do not restrict the ability of new entrants to come into the market or limit the ability of existing entrants to offer competitive service and prices.

The most recent assessment of consumer sentiment shows a dip this year from the record levels of satisfaction with retailers recorded last year. Despite the 3 per cent drop in sentiment (to 80 per cent) it remains at one of the highest levels reported since the start of the surveys in 2016.

May 19 2022
Read Analysis
GET IN TOUCH
Do you have a question or comment for AEC?