Energy efficiency: How does Australia rate?

A new report by the International Energy Agency (IEA) states that energy efficiency is the “cornerstone” to building a sustainable energy system and finds that efficiency gains alone could allow the world to extract twice as much economic value from the energy it uses – and doing so would reduce consumer energy bills by more than $500 billion dollars per year, lower energy imports, and cut air pollution.

The IEA’s Energy Efficiency 2018 report examines the opportunities for improving global energy efficiency from 2018 to 2040, across transport, buildings, industry and investment.

The IEA uses its Efficient World Strategy (EWS) which attempts to identify where efficiency opportunities exist. It sets out a vision for 2040 with 60 per cent more building space, 20 per cent more people, and double global GDP, while only using slightly more energy than today and cutting greenhouse gas emissions by 12 per cent.

The scenario assumes the adoption of all cost-effective energy efficiency opportunities between now and 2040, based on technologies that are already available today. It aims to offer a blueprint to Governments to improve their economies and lower their emissions, despite a doubling of the global economy.

The IEA states to achieve the EWS vision, a global effort to rollout energy efficiency policies is needed, and that this action alone could see greenhouse gas emissions peak before 2020 and then fall, even as the global economy doubles in size between now and 2040.

IEA’s analysis identifies key opportunities and actions that could deliver the most positive impact, such as improving the efficiency of buildings and industry, incentives to support the uptake of efficient vehicles, and building momentum in financing (Figure 1). 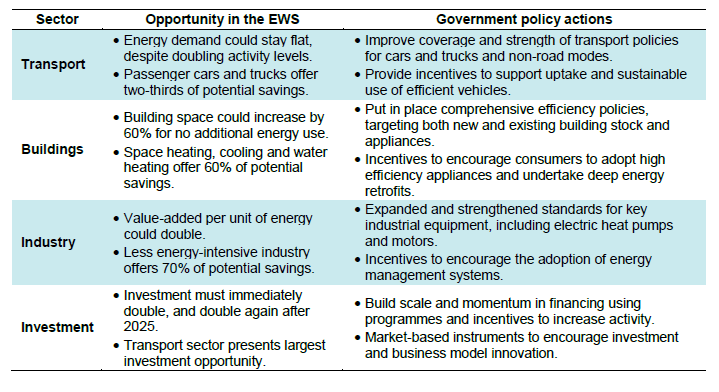 The analysis states that building codes and appliance standards have been a key policy measure in preventing additional building energy use. While energy use in the buildings sector continues to increase, without energy efficiency improvements since 2000, consumption would have been 12 per cent higher in 2017.

“Efficiency can enable economic growth, reduce emissions and improve energy security. Our study shows that the right efficiency policies could alone enable the world to achieve more than 40 per cent of the emissions cuts needed to reach its climate goals without requiring new technology. Thanks to the critical importance of energy efficiency in building a secure and sustainable future, the IEA considers it the ‘first fuel’ and facilitates the exchange of best practices among advanced and emerging economies.”

“This weakening of efficiency progress is concerning at a time when global energy demand is growing, especially as the new IEA analysis shows just how much potential gains remain …  The IEA is working actively with Governments across the world to enact the right policies for enhancing energy efficiency,” said Dr Birol. 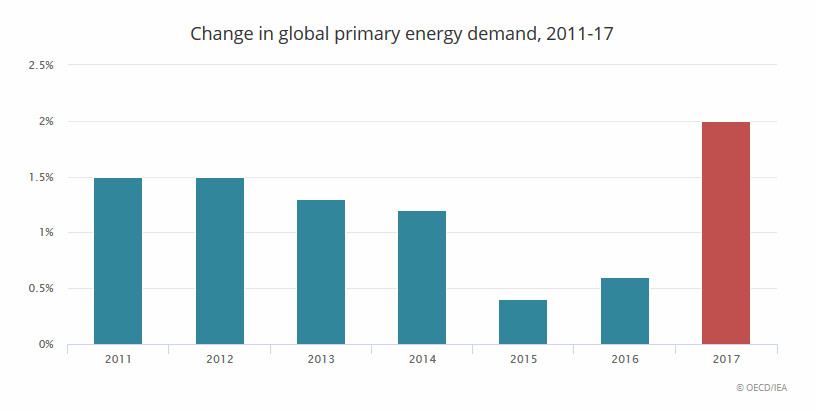 The IEA also notes that the uptake of energy efficient technologies in the EWS requires average annual investment to double between now and 2025, and then needs to double again after 2025 - however current global investment in energy efficiency is not on track to achieve the investment required in the EWS. This message echoes the IEA’s earlier World Energy Investment 2018 report, which shows that 2017 saw a pause in investments in renewables and energy efficiency - sparking the IEA to warn that the world is not spending enough on the energy transition (more here).

How does Australia rate?

Earlier this year the American Council for an Energy Efficient Economy (ACEEE) released its 2018 Scorecard that looks at how the world’s top 25 energy consuming countries rank across 36 policy and performance metrics over the categories of buildings, industry, transportation, and energy efficiency measures. Each category is awarded a maximum of 25 points.

While no country reached the perfect 100/100 score (Figure 3), the ACEEE states that this shows that all countries have opportunities to save more energy. Italy and Germany tied for first place for the highest overall efficiency with 75.5 points. France took out top spot for the transportation category, while Japan was scored first for industry. Building and national efforts were awarded to Spain and Germany, respectively. 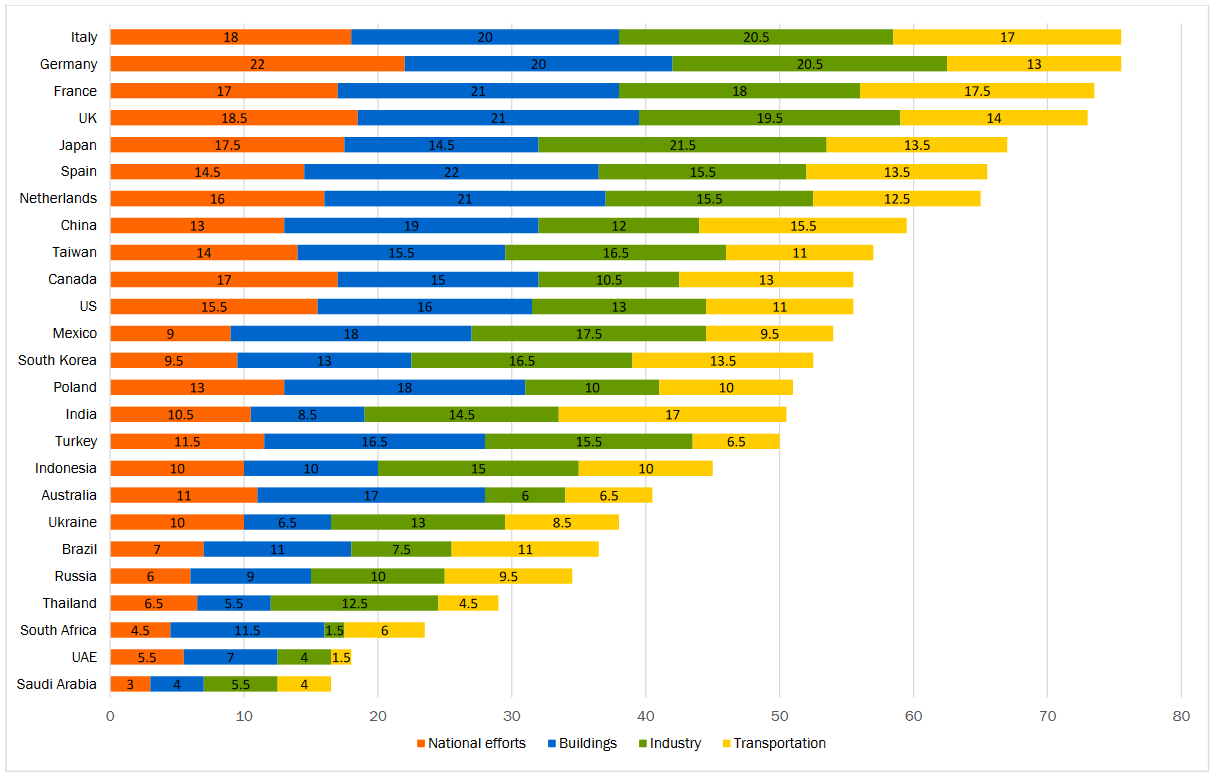 The average score for the 2018 report was only halfway, on 50.5 points. Brazil, Thailand, South Africa and the United Arab Emirates were amongst the lowest scoring countries, historically they have all had little focus on energy efficiency measures.

As noted by the ACEEE, Australia’s overarching national framework is the National Energy Productivity Plan (NEPP), which seeks to reduce costs for household and business energy consumers across both energy efficiency and energy markets.

The Annual Report also says that in 2016–17 the Clean Energy Finance Corporation (CEFC) financed $995.5 million for projects in energy efficiency in property, infrastructure, manufacturing, agriculture and universities. The Commercial Building Disclosure program was also expanded to cover an additional 1,000 commercial office buildings. The Australian Building Codes Board has progressed work to review the National Construction Code to increase energy efficiency in commercial buildings. And in 2017–18 the COAG Energy Council committed $1.46 million to improve commercial and residential buildings - amongst other projects.

The IEA’s report also mentions Australia‘s CEFC investment, stating that in the first quarter of 2018, energy efficiency was the largest sector for new green bank investment as a result of investment made by the CEFC. It also says that the evolution of existing policies are providing lessons for continuous improvement and references Australia’s further strengthening of minimum energy performance standards for refrigerators, which was first implemented in 1999 and upgraded in 2005. The IEA also believes that the digital revolution offers promise, stating that Governments are beginning to introduce policy measures to encourage readiness for demand response, such as demand response capability label for air conditioners in Australia.

According to the Department of the Environment and Energy’s Australian Energy Update 2018, the Australian economy has moved towards lower energy intensity and higher energy productivity over time (Figure 5). It states that this reflects cumulative improvements in energy efficiency as well as a shift away from highly energy-intensive industries such as manufacturing, towards less energy-intensive industries such as services. Increased use of renewable energy instead of fossil fuels for electricity generation has also had a positive impact on Australia’s energy productivity. 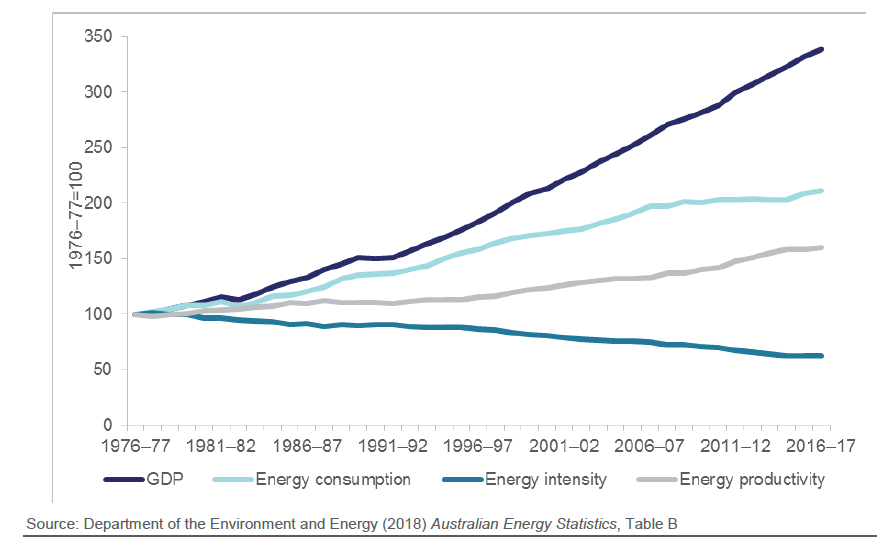 Source: Department of the Environment and Energy, 2018

However while national schemes have encouraged building improvements and the labelling of household items, more could be done. Despite the NEPP, a national approach to energy efficiency is relatively new in Australia.

And with energy affordability a key political issue for Australian governments, access to energy efficiency is an important contributing factor to many households. As covered in a previous EnergyInsider social services organisations like ACOSS have called for reforms to better assist renters access energy efficient homes. Tenants unions and environmental groups have also called for minimum energy efficiency standards in low income and rental houses.

As both the IEA and ACEEE reports point out, energy efficiency is often the least expensive way to meet new demand from energy - yet it remains underutilized globally despite its proven benefits.