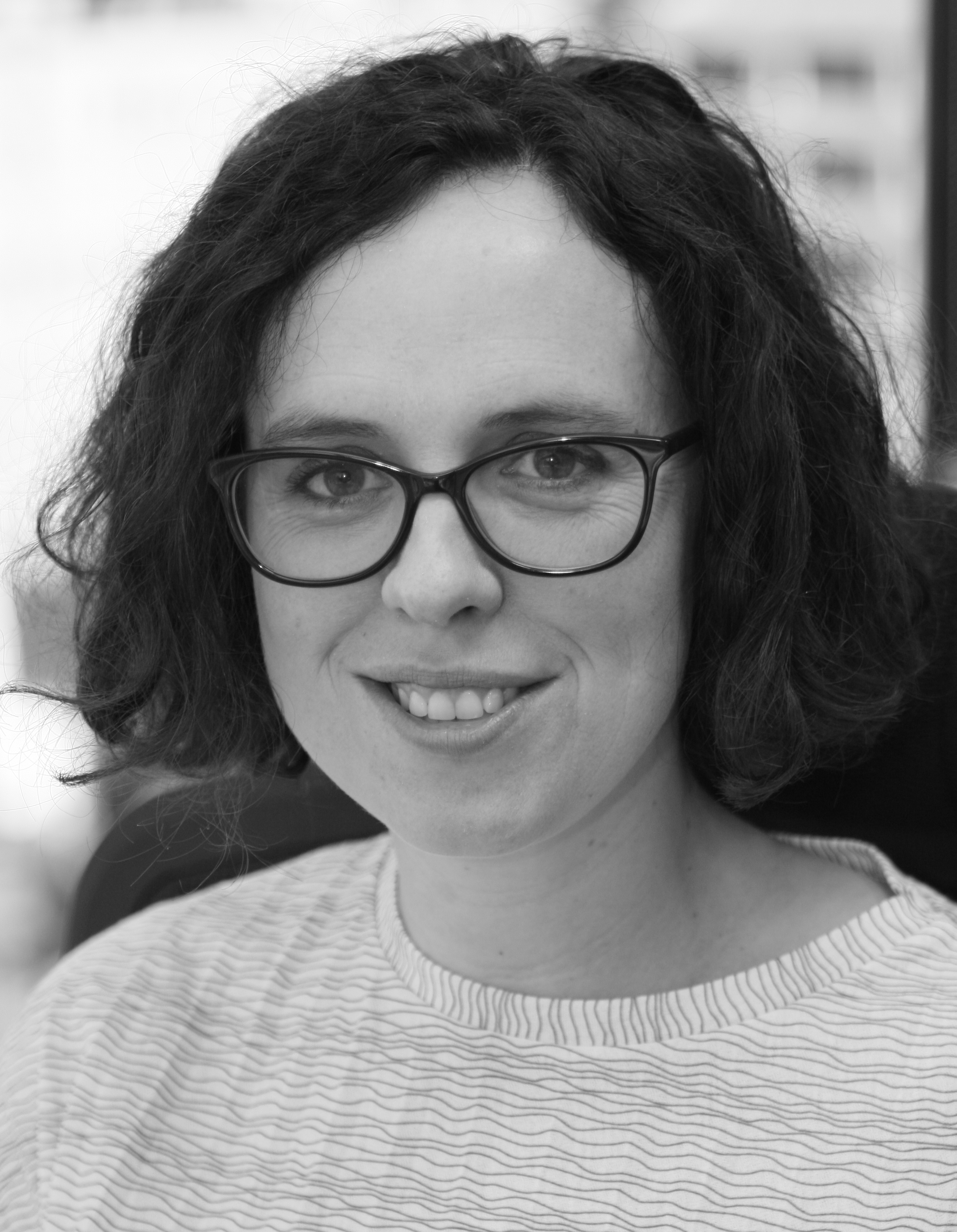 The amount a household pays for energy is a product of two basic factors: how much the household uses and how much it costs. Relatively inexpensive retail energy costs during the last decades of the 20th century masked the relative energy inefficiency of the stock of dwellings in Australia.

Brick veneer dwellings were built to maximize the abundant space of the quarter acre blocks sold in the Australian suburbs, but at an affordable price. That saving has now translated into higher operating costs for many of those same dwellings. Meanwhile, inner city suburbs host much older housing stock.

Cheap power masked the true cost of the energy inefficiency of Australia’s houses. We turned up the heaters and huddled close. We blasted the air conditioners and ran electric fans in all the rooms. This behavior has never been without cost to customers – bills have always run higher in winter, except in Queensland, Northern Territory and similar regions where cooling is a more pressing issue.

But now the cost of our inefficient housing is being felt more acutely with the rise in energy prices at a retail level, driven by underlying rise in wholesale prices. And according to the AEC’s assessment, while we may see some reduction in current prices in the medium-term, those prices will never return to their pre-2007 levels.

As Figure 1 shows, more than 70 per cent of the most disadvantaged households live in dwellings that are more than 20 years old. According to the Clean Energy Finance Corporation this indicates that they are less likely to have active or passive energy efficiency features built into them[i]. 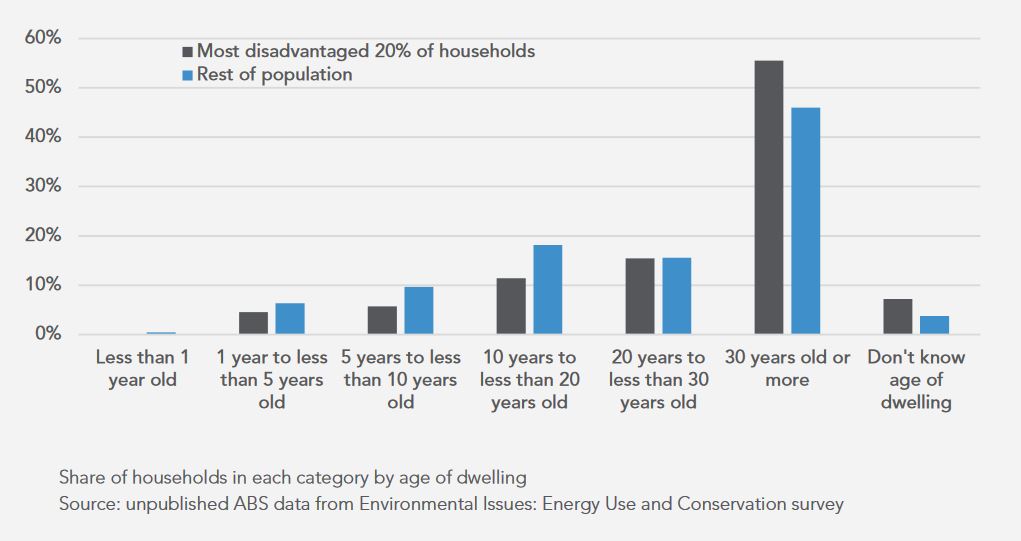 We have long known that Australia’s housing stock is not energy efficient. For example, Victoria’s pre-2005 rental housing stock averages a 2-star energy efficiency rating.[ii] According to Environment Victoria, less than half of rental properties are insulated compared to more than 80 per cent of owner-occupied dwellings[iii]. It is not surprising, then, that heating and cooling accounts for 40 per cent of average household energy use.

Energy efficiency measures have a direct and measurable impact on a customer’s energy bill. California claims that energy efficiency measures have saved the economy $100 billion since 1976 and energy bills in the state are the most affordable in the US[iv]. While the ‘passive house’ rating of 8 or 9 stars may be considered gold-standard, simple measures which can often be retrofitted go a long way to reducing household energy bills. Choice estimates that good roof insulation reduces household energy consumption on heating and cooling by as much as 45 per cent, with wall insulation saving an additional 20 per cent. Draught sealing (downlights, doorways, bathroom exhaust fans) can cut 25 per cent of consumption for heating and cooling, and shading can block up to 90 per cent of heat gained from direct sunlight.[v]

Figure 2: Areas of loss of energy in a house 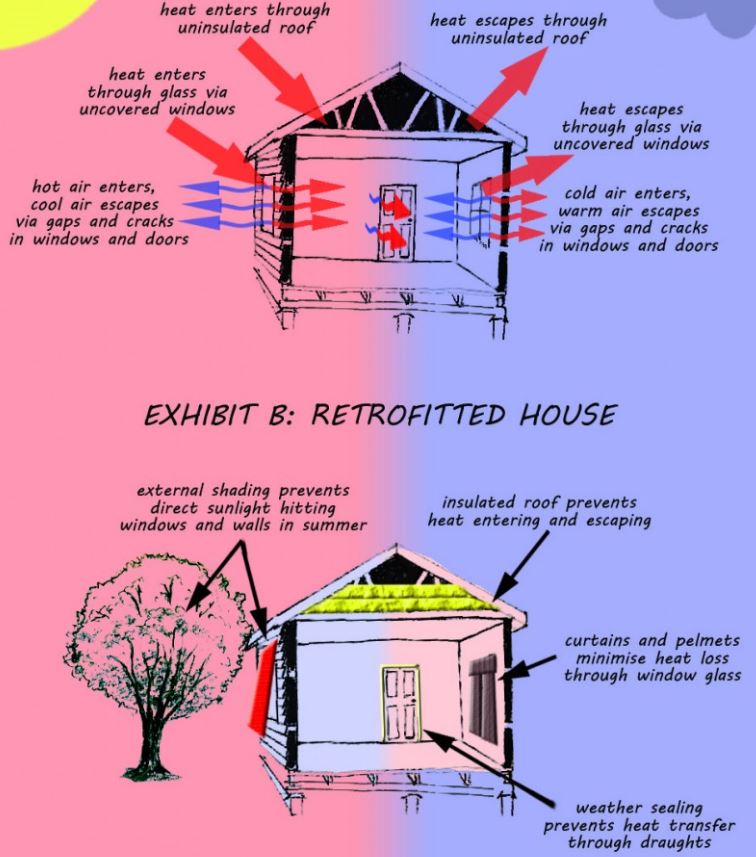 While persuasive, these estimates fail to capture bill impact that can result from highly inefficient houses in the context of sometimes extreme climatic conditions. NSW’s Energy and Water Ombudsman, Janine Young, captures the issue well, recounting ‘visits to remote Aboriginal communities where extreme heat in summer and cold in winter and poorly maintained social housing often result in quarterly electricity bills of $2,000 or more’.[vi]

The cost of energy inefficiencies is felt most by households that are least able to afford it. A principle reason for this is that low-income households are more likely to be renters than homeowners. ACOSS’ Poverty in Australia report points out that 59.7 per cent of those below the poverty line live in rental properties, with most in private rental housing (44.2%). Only 15.5% of people living below the poverty line were home-owners, which contrasts with 67 per cent owner-occupancy across the community as a whole.[vii] According to Environment Victoria there are 1.2 million people renting in the state with many of those living in “inefficient” homes.[viii]

In the private rental market, tenants have little control over the energy efficiency of their homes. In Victoria, for example, rental homes only need to meet whatever building standards that were in place when they were built[ix]. NSW is considering introducing a minimum energy efficiency standard[x]. South Australia now allows standards to be prescribed about the energy and water efficiency of rental housing[xi] while Victoria is investing in a home energy efficiency rating tool. The Victorian government is currently reviewing the Residential Tenancies Act, with revised legislation expected to be introduced to the Victorian Parliament mid-2018.[xii]

Tenants also lack security of tenure (compared with many other rental markets in the world). In this context, there is little ability for a tenant to negotiate with its landlord for improved energy efficiency, and even less incentive to invest directly in any energy efficiency upgrades for their home. These issues were raised in consultation to the Senate Economic References Committee Report Out of reach: the Australian housing affordability challenge. The report is telling: tenants struggling to make ends meet participate at lower end of the private rental market, dealing with housing stock with poorest energy efficiency, resulting in increased energy consumption and consequently increasing bills for this essential service.

The energy efficiency (or not) of public housing impacts directly on the 20 per cent of low-income earners who are in public housing at any one time.[xiii] There is a raft of government programs and measures aimed at retrofitting public housing. These vary across jurisdictions and it is not clear what percentage of public housing these programs will impact.

Governments have also introduced new initiatives to ensure improved energy efficiency in new public housing construction projects. While this development is promising, the relative scarcity of investment in public housing means that these improvements will not offer solutions for most public tenants.

With energy affordability a hot-button political issue for Australian governments, energy efficiency is an important contributing factor to many households and it’s time these calls for action were listened to.

[x] A Draft Plan to Save NSW Energy and Money, NSW Government, http://www.environment.nsw.gov.au/resources/climatechange/Environmentalfuturefundingpackage/draft-plan-save-nsw-energy-money-energy-efficient-homes.pdf