Looming increases in Victorian household electricity prices: What are the drivers?

Unfortunately there is some more bad news on the electricity price front coming up in the new year. However there may be some light further down the tunnel.

Victoria’s competitive retail energy market typically updates many of its retail tariffs with effect from 1 January each year, following the gazettal of new standing offer tariffs one month earlier. The Council anticipates some significant increases, driven by increases in the wholesale price of energy.  These increases would be consistent with similar increases announced earlier in the year in NSW and South Australia.

What has happened to wholesale prices?

Retailers contract with generators ahead of time in order to meet the needs of their customers. Retailers need to set customer prices to cover these contract costs (along with many other costs in delivering electricity such as paying for the poles and wires).

The price of these forward contracts has increased substantially in the last 12 months. Below are the prices at which one could buy a 2018 dated electricity contract since October 2016, when the closure of Hazelwood power station was announced. 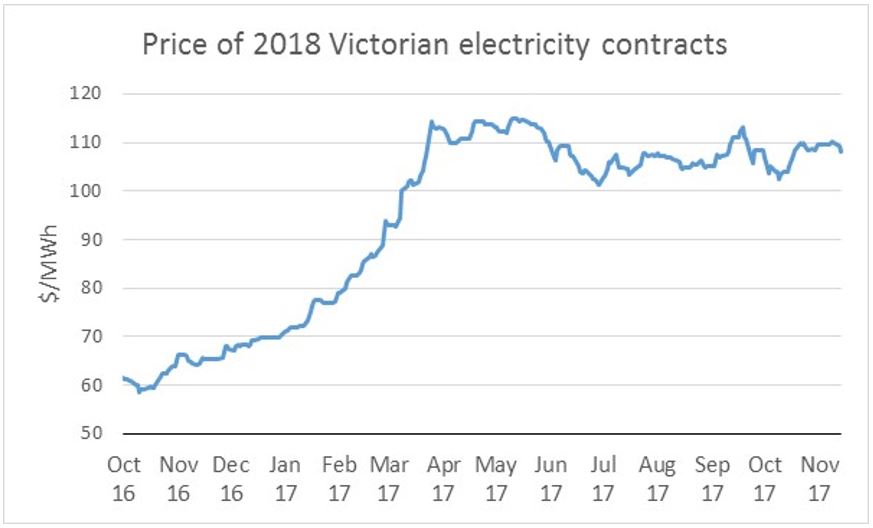 As can be seen, the price at which a retailer could buy wholesale electricity in order to satisfy a customer’s 2018 needs almost doubled between October 2016 and April 2017, but has remained fairly stable since that time.

The dominant cause was the closure of Hazelwood power station, which meant that a major source of dispatchable Victorian supply was no longer part of the market. The power station didn’t physically close until March 2017, however by then the effect of the looming closure was well understood.

Some other factors are also important. Increased prices of wholesale gas raise the electricity prices at which gas-fired generators can contract.

At this time last year, 2017 Victorian electricity contracts were trading at just under $70 per MWh. This is the figure that Victorian retailers would have been using in late 2016 to price their 2017 customer tariffs. Thus this key input has increased about 60 per cent in that timeframe.

Unlike in many previous years, regulated network costs are not a cause for an increase in customer prices. In fact residential distribution network tariffs – the largest single cost component – will fall slightly[i].

There are some movements in environmental costs and retailers’ own costs, but these are unlikely to have a major impact.

According to the ACCC, wholesale costs make up about 27 per cent[ii] of the residential electricity tariff measured in cents per kilowatt hour. Thus, a 60 per cent increase in wholesale costs would be expected to increase the final tariff by about 16 per cent.

Retailers will seek to mitigate price rises where they can. Last week EnergyAustralia announced its annual standing offer tariff for Victorian consumers would increase by 14.9 per cent and pointed to the increase in wholesale costs as power stations such as Hazelwood closed and gas markets tightened. It also indicated that there is zero increase in its retail margins[iii]

Note that standing (fixed daily) charges should not be affected by the change in wholesale price.

Of course, the actual conversion of wholesale prices into retail prices is far more complex than is presented here. Residential consumption is very peaky, which means a retailer needs to put together a portfolio of contracts to support the load, including base-load contracts (shown in figure 1) along with peak load contracts and cap (option) contracts to manage weather-driven extreme peaks. All these contracts’ prices increased also, but at different rates.

And retailing is a competitive market. Retailers use many approaches to attract and retain customers, such as periodic discounting. The above analysis is simply to explain the cost pressures that retailers face at present and why a price increase on 1 January is most likely. At the same time it is important that customers regularly exercise their right to review what retail offer provides them best value.

These cost pressures come at an inopportune time for the industry. The increase may inflame calls for re-regulation of electricity prices. However the cost pressures have nothing to do with the state of retail competition, and would necessarily still flow through to customers in a regulated market. Yet the blame would fall upon the state government rather than retailers, although in truth neither is at fault.

The outlook is better

The electricity market is in the unusual situation that wholesale contract prices dated further into the future are falling. Whilst 2018 Victorian contracts are now trading about $110 per MWh, those for 2019 are at $87 per MWh and for 2020 $75 per MWh. This reflects greater supply entering the market after the shock of Hazelwood’s closure, and possibly confidence of a more stable political environment which will encourage investors.

Should these predictions come true, we hope to be able to provide a more sanguine communication this time next year.

May 19 2022
Read Analysis
GET IN TOUCH
Do you have a question or comment for AEC?