A new report from the International Energy Agency (IEA) shows that global energy investment fell by 2 per cent in 2017 to USD 1.8 trillion - the third consecutive year of a decline - sparking the IEA to warn that the world is not spending enough on the energy transition.

According to the World Energy Investment 2018 report, last year saw a pause in investments in renewables and energy efficiency, while the global share of fossil fuels rose marginally, largely as spending in the oil and gas sector increased modestly.

According to the IEA, the power generation sector accounted for the majority of this decline due to a drop in coal additions, hydro and nuclear power capacity – a decline that more than offset the increased investment in global solar (solar PV investment represented 8 per cent of total global energy investment).

Electricity investment has moved towards renewables, networks and flexibility, yet despite this and the increased investment in solar, in 2017 renewable power investment actually declined by 7 per cent. The IEA notes that technology improvements coupled with government policies are playing a growing role in driving private spending, while falling costs also continue to affect investment trends, prices and inter-fuel competition.

On the positive side India’s investment in renewables surpassed fossil fuel-based power generation for the first time.

Despite a 6 per cent decline, the electricity sector received the largest amount of investment for a second consecutive year with more than USD 750 billion of spend, reflecting greater electrification across the globe. While USD 715 billion was spent on oil and gas supply globally.

Figure 1: Global energy investment in 2017 and percent change from 2016 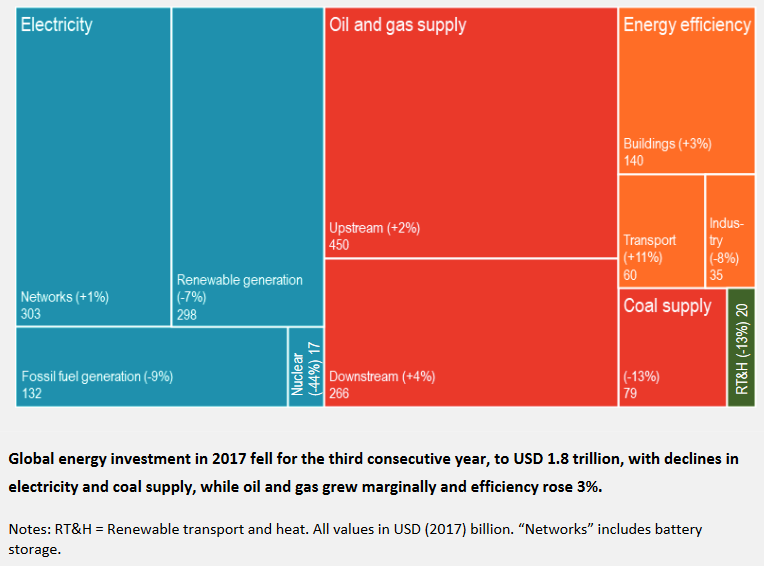 China was the largest investor in energy representing one-fifth of the world’s total, driven by energy efficiency, low-carbon electricity supply and networks (Figure 2). Meanwhile, China’s investment in coal-fired plants dropped by 55 per cent in 2017. 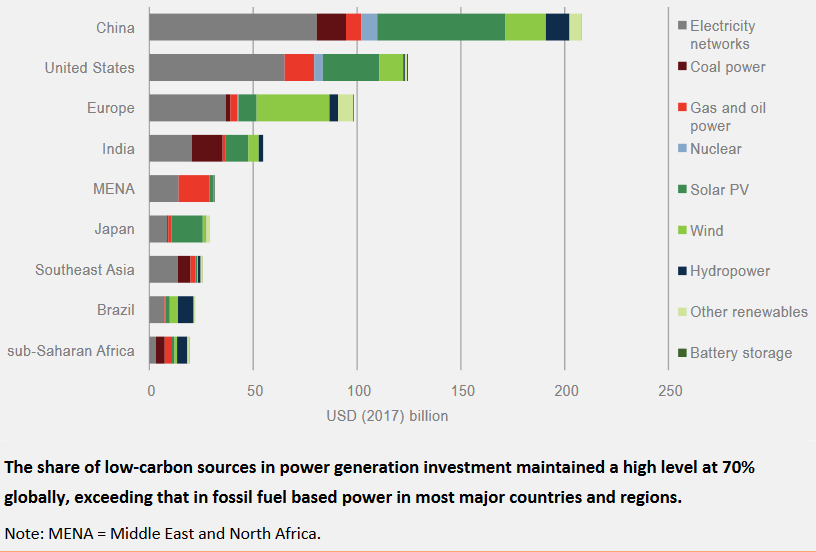 The United States followed China with spending in the upstream oil and gas sectors, gas-fired plants and electricity grids.

Europe’s investment share was around 15 per cent of global spend, driven by increased spending on energy efficiency. While Europe had a slight increase in renewables investment, this was off-set by a decline in thermal generation. 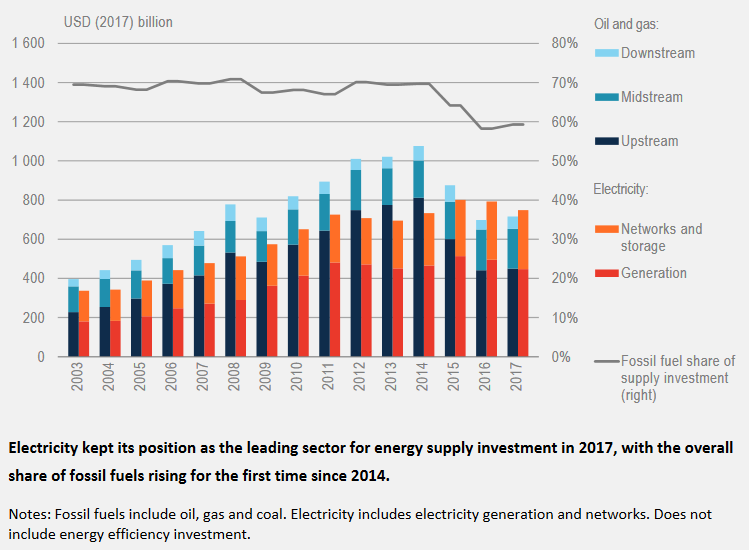 Globally, the share of fossil fuels in energy supply investment rose marginally to 59 per cent last year, the first time since 2014 (Figure 3) as spending in upstream oil and gas increased slightly.

In 2017 newly sanctioned coal power fell 18 per cent due to a slowdown in China, India and Southeast Asia. Plans to build coal power plants in the coming years declined for a second consecutive year. Yet despite declining capacity additions and retirements of existing plants, the global coal fleet continued to expand, mainly due to Asia. And while there is a shift towards more efficient plants, 60 per cent of current capacity uses inefficient subcritical technology, the IEA notes.

Clean energy supply has grown fastest in the power sector with the share of renewables and nuclear generation investment reaching over 70 per cent in 2017. The IEA notes that greater spending on networks and battery storage are crucial for solar and wind generation (Figure 4).

Figure 4: Global investment in the power sector by technology 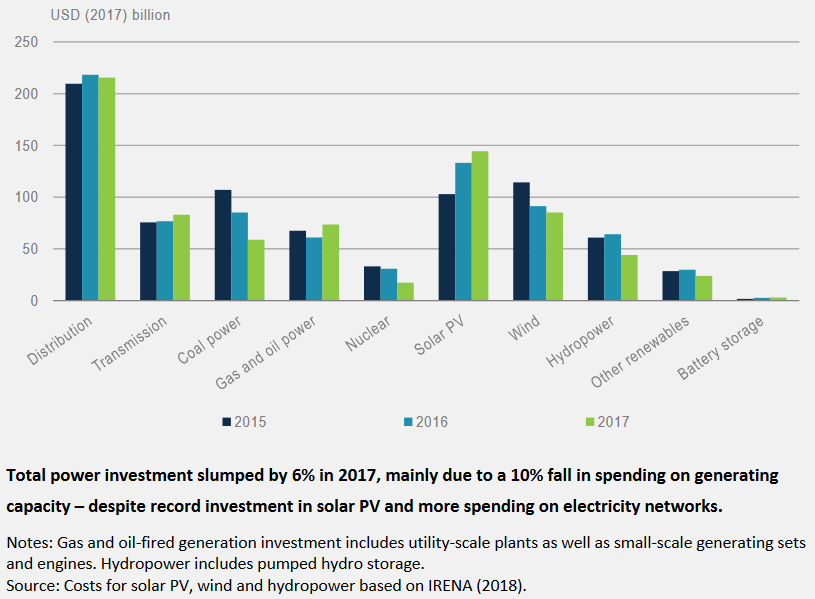 Across the energy sector emerging digital technologies are continuing to control costs, and this was especially noted for the upstream gas sector during 2017. IEA praised the oil and gas industry for keeping costs in check and because of “cost discipline by operators and excess capacity in the services industry” the rise in oil prices since 2016 has not led to related cost increases.

Electricity network investment increased by 1 per cent (USD 300 billion). China is the largest for grid investment, followed by the US. According to the report, power companies are modernising electricity grids by spending more on smart grid technology, which accounted for 10 per cent of network spending in 2017.

Though while still a small part of the market, electric vehicles now account for much of the growth in passenger vehicle sales across the globe. Consumers spent USD 43 billion on plug-in hybrids and pure battery vehicles in 2017, equating to more than one in every 100 passenger vehicles sold. This increase is expected to be due to government incentives – around one quarter of the global value of electric car sales in 2017 came from government budgets, where more capital is being allocated to support the sector each year (Figure 5).

Figure 5: Global spending on electric cars and trends in price and driving range 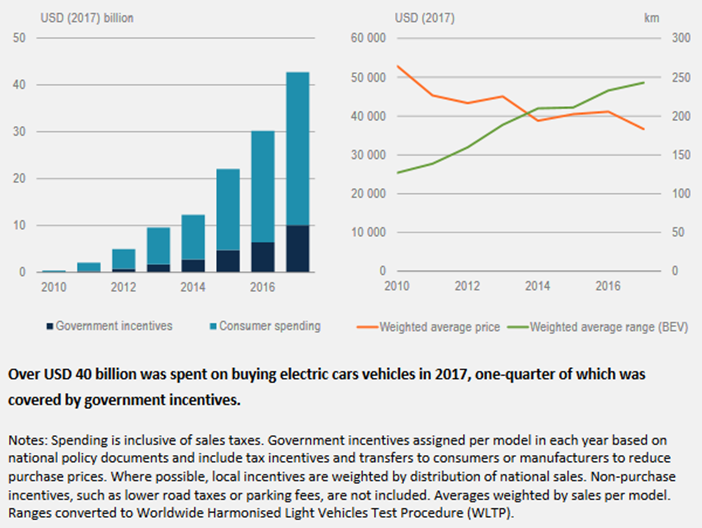 A pause on renewables

The IEA notes that after several years of growth, combined global investment in renewables and energy efficiency declined by 3 per cent in 2017, and this trend is expected to continue in 2018 - and while part of the drop is due to falling costs that makes renewables like solar PV more affordable, the IEA has warned against the decline.

“Such a decline in global investment for renewables and energy efficiency combined is worrying,” Dr Fatih Birol, the IEA’s Executive Director said. “This could threaten the expansion of clean energy needed to meet energy security, climate and clean-air goals. While we would need this investment to go up rapidly, it is disappointing to find that it might be falling this year.”

The IEA states that as China accounts for more than 40 per cent of global investment in solar PV, its policy changes have world-wide effects even if prospects remain strong in other regions. Outside of China, the average size of awarded solar PV projects in emerging economies rose by 4.5 times over the past five years. However, recent policy changes in China promoting more cost-effective solar PV have raised the risk of a continued slowdown in renewable power investment during 2018.

Overall, renewables accounted for two-thirds of global power generation investment. Renewable capacity additions rose by only 2 per cent (compared to 13 per cent during 2014-16) supported by a more than 25 per cent increase in solar PV installations.

“Unit costs for solar PV projects, which represent 8 per cent of total energy investment worldwide, fell by nearly 15 per cent on average, thanks to lower module prices and a shift in deployment to lower-cost regions,” the report says.

However the reason for the investment decline was the commissioning of fewer onshore wind and hydropower plants which, when compared with solar PV, produce more energy per unit of capacity.

Onshore wind investment fell by almost 15 per cent due to lower deployment levels and falling costs. Offshore wind investment rose to record levels, with the commissioning of nearly 4GW of new plants, mostly in Europe, however investment in hydro power dropped to the lowest level in a decade due to a slowdown in China, Brazil and Southeast Asia.

“Investment in energy efficiency is particularly linked to government policy, often through energy performance standards,” the report says. And due to a slowdown of construction in China, efficiency investment in the industrial sector is estimated to have declined by 8 per cent.

While the report points to government policy in developed nations directly impacting global investment levels, it also notes that government energy research and development has helped increase spending in this area by around 8 per cent in 2017 (USD 27 billion). This growth was mainly driven by spending on low-carbon technologies (13 per cent), which the report says “is welcome after several years of stagnation”.

However the report notes that new approaches for increasing investment in carbon capture, utilisation and storage are needed for the world to meet its climate change goals. Electric batteries are also becoming increasingly deployed across the sector, but their impact will largely depend on cost trends which will be strongly influenced by investments outside the energy sector, the IEA says.

California has been grappling with a challenge familiar to parts of Australia’s energy market – how to make a seamless transition to a lower carbon grid. In California, as with South Australia in 2016, the transition was put to a stress test by a weather event. In the case of the US state it was a heatwave described as one of the worst in years leading to rolling blackouts.

Aug 27 2020
Read Analysis
GET IN TOUCH
Do you have a question or comment for AEC?