The three Rs of electricity retailing: Regulators, Reviews and Risks

Last week New South Wales’ Independent Pricing and Regulatory Tribunal (IPART) released its latest look at retail competition in that state’s electricity market, adding its voice to warnings from the Australian Competition and Consumer Commission (ACCC) about the implications of energy re-regulation for consumers.

The views of these two regulators may be of interest to the Victorian Government as it considers its response to the recommendations of the Independent Review of the Electricity and Gas Retail Markets in Victoria (the Thwaites Review), which released its report in August.

Amongst some sensible recommendations relating to improving market transparency and deals for consumers (recommendations 3 – 11 have broad support), the Thwaites Review has controversially recommended a re-regulation of prices through the removal of the Standing Offer in Victoria and the introduction of what it has termed a ‘Basic Service Offer’.  These are contained in recommendations 1 and 2 of the Thwaites Review.  The AEC has previously written about structural issues with the Basic Service Offer as proposed (Thwaites Review of Retail markets in Victoria – the good, the bad and the ugly), and commissioned an analysis by Oakley Greenwood which found that the modelling used to justify the introduction of the Basic Service Offer had overestimated retail margins in Victoria by around 30% [a summary of the Oakley Greenwood analysis can be found here].

Government intervention in retail markets seems to be the ‘new normal’ as a means of dealing with the political pressure that comes with increasing retail prices.  In response to this political focus retailers are working on a number of different projects (in particular with the Federal Government) designed to reform the way retail businesses deal with their customers.  However most jurisdictions stop short of considering re-regulation, and governments are understandably wary of being perceived to ‘own’ entirely the problem of rising retail prices driven not by excessive retail margins, but by a volatile wholesale market.

The view from NSW

In considering the NSW retail electricity market, IPART’s review found that competition for residential and small business customers continue to improve with each of its key indicators improving or staying steady. Concentration in the NSW market fell and customer activity increased, continuing the trend since deregulation in 2014 (see table 1).

Table 1: Change in key indicators of competition in NSW since price deregulation

Key findings by IPART were: 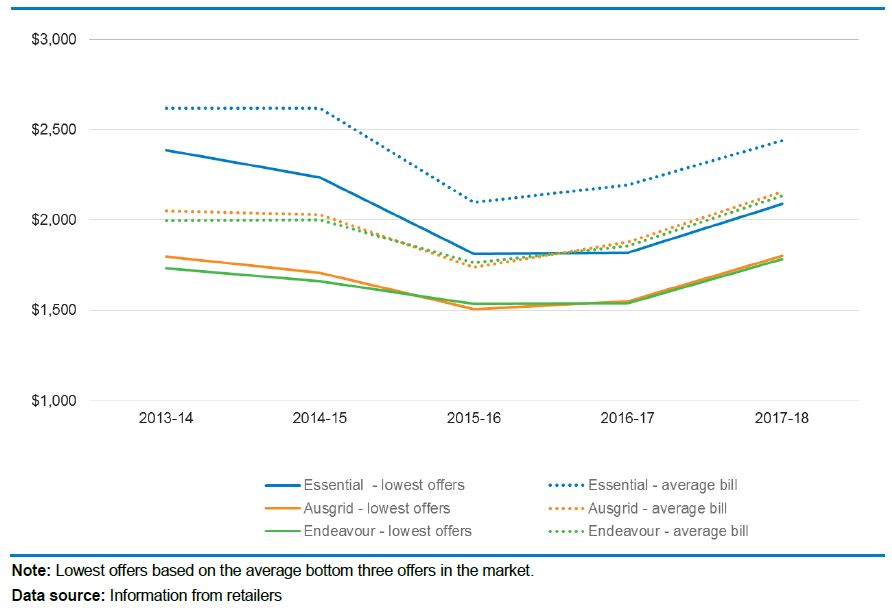 “Over the last 12 months, several reviews have considered how outcomes for customers in the electricity retail market can be improved.  In Victoria, one recommended that its State Government recommence price regulation because, in its view, customers were paying more as a result of price (and product) deregulation.

“However, based on our review, we consider that allowing competition to continue to develop would deliver the best outcomes for customers in NSW. Therefore governments should focus on facilitating increased customer engagement and activity in the retail market to further enhance competition, and ensuring that hardship and vulnerable customers are not paying more than they need to.”

In its assessment, IPART believes that “reregulating retail prices is likely to reduce the level of engagement and activity in the market (as it is more likely to be seen as a default option for customers).” It also states that “heavy-handed” options are likely to lead to less efficient outcomes over time, and take away options from customers.  That appears to have been the case in the UK as a result of interventions. The outcomes of market interventions have been highlighted by Professor Stephen Littlechild, who was a member of the UK’s Monopolies and Mergers’ Commission from 1983-1988 and was also UK Director-General of Electricity Supply.  He examined how regulatory intervention had distorted prices and profits in the UK retail energy market.  In several cases measures that were designed to lower prices and increase competition had the exact opposite effect, with consumers the losers (Regulation of retail markets in the UK and Australia).

IPART argues that whilst re-regulation may have some attraction in the short term, in practice it will only decrease retail competition and “reduced activity in the demand-side of the market will lead to less vigorous competition on the supply-side”.

And in the medium and the long term? Re-regulation will result in the further entrenchment of the market position of incumbent retailers and a dampening of the incentive to offer lower prices and improve innovation and services.

“This reduced competition is also likely to stifle the growing opportunities from new technologies to provide innovative energy options, limiting options for customers over the longer term.”

The ACCC chair pointed to the “many lessons” to be learnt from what had driven higher electricity prices in Australia, including:

Sims also pointed to the need to factor existing market power in retail and generation into any policy measures by taking steps that improve rather than worsen that situation.

Following the ACCC Chair’s remarks to the National Press Club, the ACCC has provided its interim report, the Retail Electricity Pricing Review, to the Federal Government, which in turn released it publicly last week.

That report shows retail margins to be significantly lower in Victoria than in the modelling that sat behind the Thwaites Review, and is consistent with the Oakley Greenwood report. This result is hardly surprising as the Thwaites Review did not have the benefit of being able to compel, as the ACCC did, the production of 10 years of financial data from retailers.  Commentators should now accept that the actual margins being made by retailers in the National Electricity Market are as the ACCC has found, and in Victoria the average net margin per customer (on an EBITDA basis) was in 2015-16 around $119. This is 1 per cent lower than they were in 2007-08 (see Figure 1). 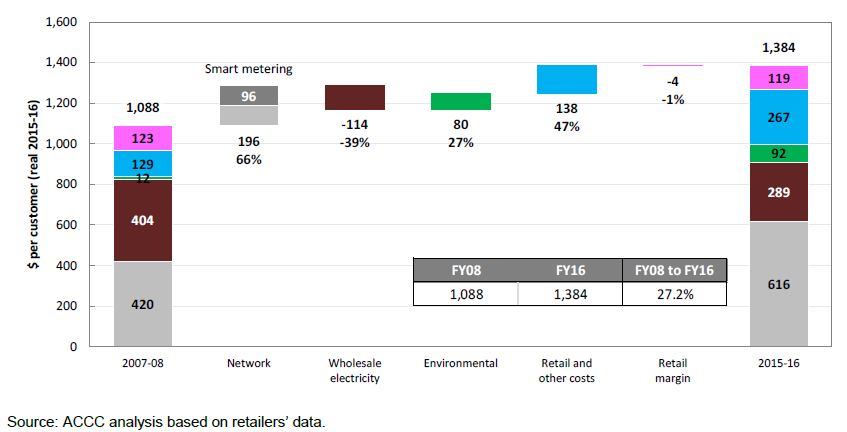 Both the ACCC review and IPART’s report deliver a consistent message – retail competition can deliver greater benefits to customers (and cheaper retail deals) if the industry and government can work together to make the market more transparent to the average customer.  If customer engagement and activity in the market can improve then more customers will end up on cheaper deals. The Federal Government has already called on retailers to lift their game in terms of simplifying the market, and under the auspices of the Australian Energy Regulator work is underway to develop a simple comparator rate device which will make it easier for customers to compare offers, and identify the best offer for their circumstances.

IPART supports calls for retailers to do more to help customers navigate market offers and better tailor products and services, with the assistance of third parties (such as government comparator sites) to provide back-up services.  The existing government comparator sites are excellent, but if offers are expressed in terms that don’t include discounting they will be less confusing for customers to use and understand.

As stakeholders in Victoria await the opportunity to formally consult with the Victorian Government in relation to the Thwaites Review, the alarm has been sounded on re-regulation as likely to deliver worse outcomes for consumers in an environment where the volatility of the wholesale market is going to continue to put significant upward pressure on prices.  It is hard to see how a centralised market in which the cheapest deals are no longer available, and larger retailers are the sole survivors with little incentive to invest in innovation and service is better for consumers struggling to pay their bills.

Rather than try to make retailers the scapegoat for wholesale market volatility, regulators and governments would be better advised to focus on consumer outcomes and work with the industry and community stakeholders to make the energy market easier to access and the cheapest deals easier to identify.

During the height of COVID-19, Australian retailers were concerned that the impacts of government interventions might unintentionally impact the ability of retailers to meet their upstream obligations. The impacts on retailers of providing additional protections – on top of the already notable consumer protections in place - and the longer-term debt implications for customers remained a concern.

Apr 08 2021
Read Analysis
GET IN TOUCH
Do you have a question or comment for AEC?