Thwaites Review of Retail Markets in Victoria: The good, the bad and the ugly

The energy industry in Victoria received the much awaited Independent Review of the Electricity and Gas Retail Markets in Victoria (the Thwaites Review) on 13 August 2017. The product of some eight months of research and consultations led by a panel of eminent Victorians (John Thwaites, Terry Mulder and Patricia Faulkner), the Thwaites Review now rests with Minister D’Ambrosio for her consideration. This article addresses the key recommendations of the report.

The Thwaites Review’s 11 recommendations include the substantial and radical proposal that prices be effectively re-regulated and the standing offer abolished, to more benign measures which would assist consumers understand the retail offers in the market. The AEC is conducting a detailed review of the report and its supporting analysis, which will be made public once it is completed. In the meantime, and to its credit, the Victorian Government has said it will take time to carefully consider the report, allowing stakeholders an opportunity to consult with it on the recommendations before a finalised government response towards the end of the year.

High energy prices have increased scrutiny on all parts of the energy supply chain. Energy prices are the subject of consideration by the Thwaites Review, the Finkel Review, an ACCC Inquiry into retail energy prices and a separate retailer roundtable with commitments made to the Prime Minister. Whilst recent price increases are the result of scarcity of supply in the wholesale market, and follow previous price increases driven by higher network charges, there is now an increasing focus on the operation of retail businesses.

Competitive retail energy markets will be a key enabler of decarbonised energy systems in the 21st century. As we increase the use of variable supply renewable generation, we need to increase the ability of businesses and households to vary their demand. Like most markets, different consumers have different energy needs and flexibility. They will vary in their use of technologies to help manage this: they will pay and be willing to pay different rates and be incentivised by different discounts and offers to help manage demand. Price re-regulation would stifle the dynamism of competitive markets that can deliver on these varying consumer preferences, chill investor confidence in the market and paralyse the investment commitment in generation that is needed to bring downward pressure on costs.

The AEC’s preliminary view of this report is mixed: it contains some positive recommendations - in particular in relation to the delivery of clearer information to customers and support for vulnerable customers. However it misunderstands the role of retailers and the fundamentals of the market. An implementation of all of its recommendations would result in disastrous and unintended consequences for the market, and by extension its customers. These aspects are discussed below.

The major thrust of the report is found in Recommendation 1, which proposes a Basic Service Offer be determined by the Essential Services Commission (the ESC) for provision by all retailers. This appears to be a kind of ‘floor price’, which would specifically exclude the ability of retailers to account for headroom and customer acquisition costs and would enable the ESC to set the profit margin retailers are permitted. We have characterised it a floor price, rather than a ceiling, as the constraints proposed for the calculation of the Basic Service Offer make it unlikely that it would be commercially feasible to compete below it.

This recommendation, if implemented, would see the exit from the Victorian market of multiple smaller retailers, and with them the jobs that they represent.  New entrants to the market would be a thing of the past.

Further, it would almost certainly kill any appetite the remaining retailers have for delivering to the market more flexible offers than the Basic Service Offer. For a government keen to deliver new energy solutions for the future, this would be a serious and counterproductive constraint on Victoria’s retail energy market.

Recommendation 2 of the report recommends the abolition of standing offers. As many readers will recall, standing offers were originally designed to facilitate competition by allowing sufficient headroom for retailers to compete on price below the ceiling they represent.  Standing offers also perform an important consumer protection role in the market: they are designed as the default contract arrangement for customers who are not on a market contract, with special terms and conditions as set out in the Energy Retail Code. It does not seem wise or efficient to abolish the standing offer without understanding its multiple roles. It also seems pointless to abolish the standing offer only to create (in part) a similar regulatory construct in the form of the Basic Service Offer.

A focus on standing offers as a means of understanding and managing the market can also be misleading, as very few consumers are on this type of contract. This is borne out by figures in Victoria (see table below), which suggest that around 10% of electricity customers are on standing offer contracts , the lowest amongst jurisdictions in the NEM. 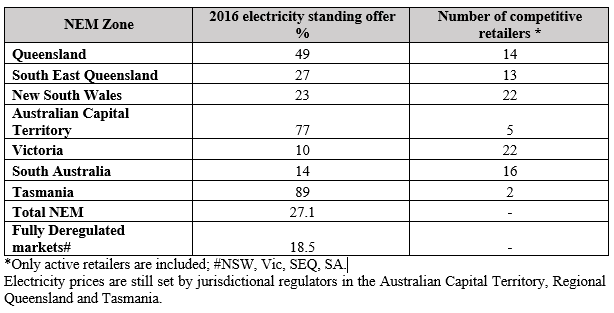 The content of Recommendation 3 of the Thwaites Review is surprising in that it appears to be inconsistent with the normal operation of contracts in the retail energy market. For example, it seems to propose that, when a contract term ends, the discount should continue, or be ‘evergreen’. This is incompatible with contractual law – the contract is either on foot (in which case terms apply) or it is not.

It is also proposed that customers should be rolled onto equivalent contracts at the end of a contractual period. Absent explicit informed consent of the consumer, once the customer has been rolled onto the new contract, this may create disputes about the most relevant contract in terms of discount, term and other features. The power of choice in these matters must remain with the customer, not be determined by a retailer trying to second-guess a customer’s intentions and future needs.

A clear theme through the Thwaites Review’s report is an enthusiasm for the removal, or at least the serious constraint of, the ability of retailers to offer discounts in the market. However, the report acknowledges that retailers’ discounting practices have been developed in response to their customers’ preferences and that the practice of discounting “has been successful in promoting consumer engagement”.

Retailers would acknowledge that some discounting practices can be confusing to customers, and can be a disincentive to engage with the market. Comparator sites are already designed to address this issue, although other communication channels with consumers can always be improved. To do away with discounting practices and a competitive market altogether would be a serious overreaction to the problem at hand.

Whilst there is always scope to improve the framework in which retailers operate, deregulation is not the cause of high retail prices in Victoria. Retail prices are the product of a number of factors – particularly increasing network prices and sustained pressures in more recent years in the wholesale market.

In an environment of rapid energy market transformation, the flexibility of retailers to respond to the consumer demands of the future is key. The Basic Service Offer would kill competition in the energy market and shut down retail businesses. It will likely result in a ‘one size fits all’ retail offer for customers which is completely at odds with the energy market of the future. It will also act as a disincentive to potential investment in Victoria’s wholesale market, which is critical to bring downward pressure on prices.

The AEC will continue to work through the detail of the Thwaites Review’s report and will present its detailed analysis to the Victorian Government in the coming weeks.

The Federal Cabinet recently met to consider the Government’s plan for a net zero emissions by 2050 target. This has proved challenging for the Coalition partners. The push for stronger interim targets has emerged in the lead up to the Glasgow Climate Summit and has been reinforced by other countries increasing their commitments. We look at some of the targets that have been set both domestically and internationally.

Debate about Australia’s national security needs and commitment to nuclear submarines has led to renewed advocacy for a domestic nuclear power industry. The question of nuclear power has previously been formally canvassed. While it's sensible to keep technology options open through a technology neutral approach, nuclear generation has major impediments to its introduction in Australia. We look at some of the challenges.

Oct 07 2021
Read Analysis
GET IN TOUCH
Do you have a question or comment for AEC?