The latest residential electricity price trends report released today shows the ongoing fall in power prices for households is being driven by lower wholesale prices and reduced environmental costs in most regions.

The report highlights that wholesale and environmental costs, largely driven by lower large-scale generation certificate costs, are falling with the noticeable exception of the Australian Capital Territory. Retail costs have also decreased in most jurisdictions and retailer market offers in jurisdictions are still coming down.

Network costs – both transmission and distribution – are starting to increase and this trend is expected to continue across the period to 2023-24. Equally, with additional transmission and grid expansion expected to be developed to support increasing renewable generation the Australian Energy Market Commission (AEMC) expects this to accelerate over the next decade. Transmission costs are increasing 16 per cent in the first three years. Note transmission companies may not recover the costs of the very large Integrated System Plan (ISP) projects until after they are complete. Few will have finished in the AEMC’s forecasting horizon.

Breaking down the costs

Wholesale costs, which make up 35 per cent of the bill, are expected to fall by about $92 between 2020-21 and 2023-24 across the National Electricity Market (NEM), despite the staged exit of the Liddell power station in New South Wales.

The reduction is driven by new capacity entering the market in the form of wind and solar farms, as well as large-scale batteries and gas-fired generation (Kurri Kurri and Tallawarra B). There is almost 5500MW of committed new large-scale generation and storage coming on line in the three years to 2023-24 as well as around 4130MW of new rooftop solar.

Committed projects in the period include 2671MW of large-scale solar and 1393MW of wind, more than 900MW of gas-fired plant and 470MW of large-scale batteries. New South Wales will add 2287MW of new capacity, Queensland 1557MW, Victoria 1354MW and South Australia 240MW.  Over the same period around 2500MW of plant is expected to leave the NEM (see figures 1, 2 and 3). 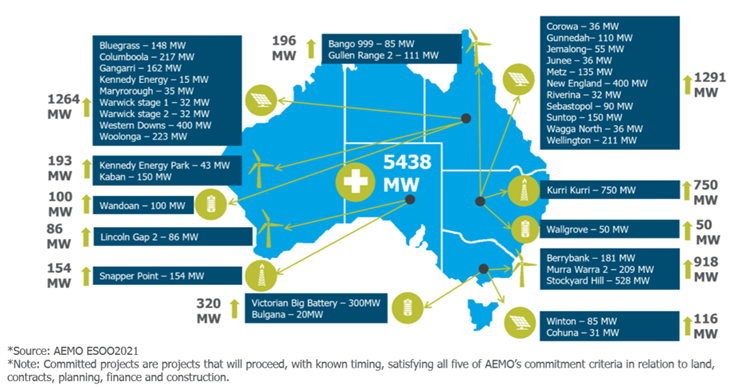 While wholesale prices fall in 2021-22, they are expected to see an increase in 2022-23 driven in part by gas prices but also the retirement of the Liddell power station in New South Wales, as well as the closure of two units at the Torrens Island (A1 and A3) and the Osborne gas-fired plant in South Australia.

As the retiring plant is replaced by additional large-scale renewable generation, storage and gas plant, wholesale prices are expected to then fall again (see figure 4).

Network costs are projected to increase by $31 over the three-year period or 5.2 per cent – equally spread across transmission and distribution networks

Environmental costs are expected to fall by $16 or 13.2 per cent in the same period with a drop in large-scale renewable energy costs as a result of lower large-scale generation certificate prices. 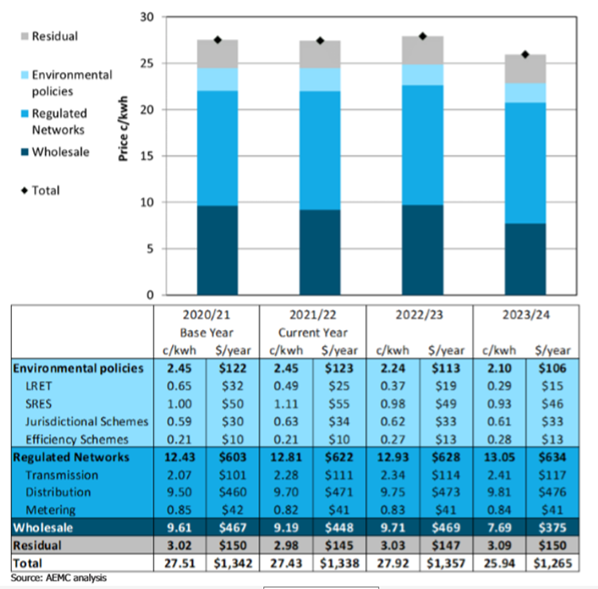 The fall in residential electricity prices will be highest in South-east Queensland where they are expected to be 10 per cent lower and lowest in South Australia, while the ACT will see a 4 per cent increase in power bills largely due to its 100 per cent renewable energy target and the contracts for difference it entered to support renewable projects.

While the cost of Federal environmental schemes like the LRET are expected to continue to fall, jurisdictional schemes can have an impact, such as the ACT’s 100 per cent RET, which requires Evoenergy, the ACT’s distribution business, to pay for wind and solar farms. As a result, the environmental component of household bills in the ACT are expected to increase by 43.9 per cent in the reporting period.

When Evoenergy announced its 2021-22 network pricing proposal, it pointed to a 133 per cent increase in the jurisdictional charge stemming from the ACT Government’s 100 per cent RET. Under the target large-scale wind and solar generation is paid under contracts for difference. The amount is calculated as the difference between the fixed feed-in tariff price agreed to in the contract and the prevailing wholesale electricity price.  Lower wholesale prices effectively mean generators revenues are topped up with the costs passed through to consumers. The nature of the ACT scheme was covered in a recent article by Chris Uhlmann.

The results can be seen in the latest AEMC report – the cost of the ACT’s feed in tariff scheme jumps from $159 in 2020-21 to $371 in the current financial year before dropping slightly to $338 in 2023-24. The report notes overall environmental costs are expected to increase by almost 44 per cent over the three years covered – those are costs associated with the Federal RET (which are expected to fall), the ACT’s own target and its energy efficiency improvement scheme (which drops slightly over the three years). 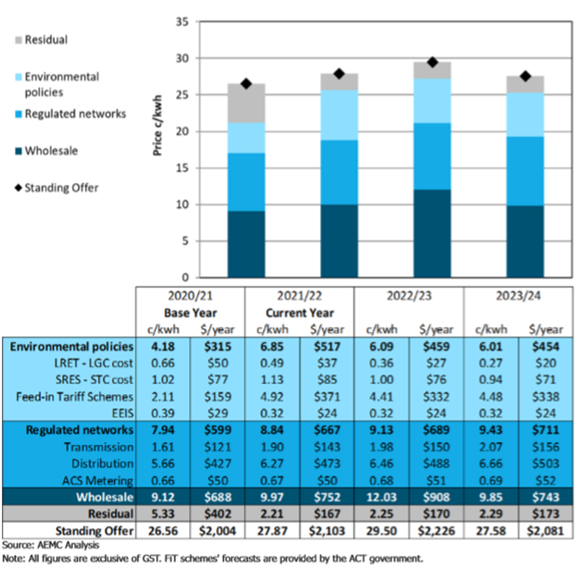 New South Wales residential bills are forecast to fall by 4 per cent ($50) with wholesale prices expected to decrease by 7.9 per cent with new wind and solar as well as gas-fired capacity in 2024. Wholesale prices will increase in 2022-23 as a result of the closure of Liddell units before falling again as the new capacity comes into the grid.  Network costs are expected to increase 4.7 per cent, driven by an increase in transmission costs. Environmental costs are also projected to fall (17.8 per cent) with a decrease in LRET costs. The AEMC reporting period does not reflect the impact of the State Government’s Electricity Infrastructure Investment Roadmap.

NSW expects its roadmap to reduce average residential power bills by $130 per year between 2023 and 2040.

The Agreements will protect successful developers from market returns below their investment cost. This will be done by put options giving “optional access to a competitively set minimum price for their energy service”.

If market conditions are strong, the developers will earn good returns, whilst downside risk is removed. Losses will be recovered from distribution network businesses, who pass them onto consumers similarly to the ACT scheme.  As the NSW scheme is intended to suppress NSW prices, it is probable these options will be exercised, and so the cost of NSW environmental policy is likely to grow as it has in ACT. However this will most likely occur beyond the three-year forecast horizon of the AEMC report.

In Victoria residential bills are expected to fall 7.7 per cent ($99) over the reporting period with wholesale prices forecast to be 38.9 per cent lower particularly due to wind farms coming into the system. Network costs are expected to increase 6.8 per cent driven by transmission and distribution costs.

Environmental costs are expected to be 11.3 per cent lower as a result of lower LGC costs. Unlike most other jurisdictions retail costs will increase from $112 to $196 likely reflecting the additional requirements placed on retailers in the state compared to retailers operating in other NEM regions.  Victoria has a Renewable Energy Target which also protects beneficiary renewable energy projects from low prices, however these losses are worn on budget and are therefore passed to the Victorian taxpayer rather than consumer.

SEQ is expected to see the biggest fall in household power bills (10.3 per cent, or $126). Wholesale prices are forecast to drop 9.7 per cent, while network costs are projected to rise 3.4 per cent over the same period. Like other jurisdictions environmental costs are expected to be 24.7 per cent lower over the three-year period. Retail costs will be $76 lower with SEQ expected to have the lowest market offers.

South Australian residential bills are expected to fall 2 per cent with lower wholesale costs (down 13.9 per cent) driven by increasing rooftop solar a major contributor. Network costs will increase 2.3 per cent, as will retail costs, while environmental costs will be 15.4 per cent lower due to the lower LRET costs.