While most of the focus is on the total share of energy markets by generation and fuel type, the report also carries some insights into emerging energy security risks as the world moves to lower emissions grids, which the report notes could well be a “bumpy” road.

Traditional risks such as gas supply remain, while new potential hazards will emerge with the shift to increased renewables and low emissions technologies and as a result will likely increase the issues to be managed. Some of the issues highlighted by the IEA include:

It also flags the potential for additional and increased physical risk to energy infrastructure from climate change and weather-related risks such as cyclones, coastal floods, bushfires, and more limited water supplies.

The latest report highlights, while we assume an orderly process in move to decarbonisation, it could be volatile and disjointed; as the transition accelerates, reliable operation of the energy system will depend on increasingly complex interactions and there will be the risk of destabilising regions and local communities if not well managed.

As we have seen in Australia, rising shares of solar and wind generation bring fundamental changes to how the system operates and must be managed and, according to the IEA, there is the need for “policy makers to mobilise investment in all sources of flexibility in order to maintain electricity security”.

The key challenge as more renewables enter power systems will be continuously matching demand and supply. The expected strong growth in wind and solar generation across the three key scenarios[i] - Net Zero Emissions by 2050 (NZE), Announced Pledges Scenario (APS) and State Policies Scenario (STEPS) - considered by the IEA across all regions, will see a global shift from grids based on dispatchable generation which, as we are witnessing in Australia, will require a shift in the operation of systems.

Australia is in the leading pack with the transition, and its speed is what is behind the Australian Energy Market Operator’s commitment to having the grid capable of managing 100 per cent renewables at times by 2025.

Figure 1 shows the IEA’s projections for the volume of renewables by regions and scenario, as well as the impacts they are expected to have on the energy system based on six phases.

Figure 1: The phases of renewable integration based on scenarios 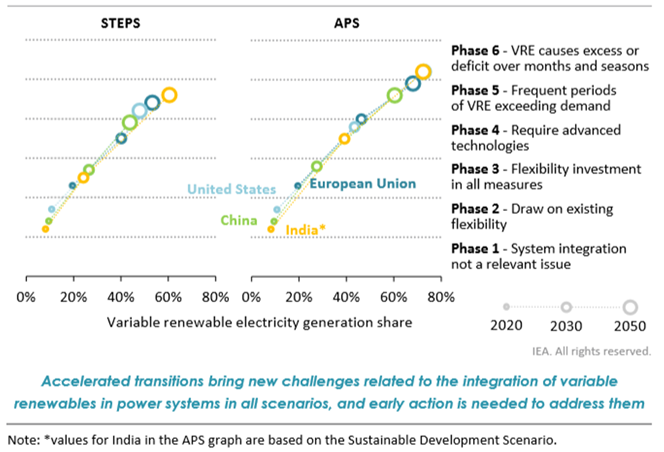 The report’s APS projected each region to hit phase 4 by 2030, where renewable generation accounts for most or all generation for increasing periods putting greater stress on system management and requiring frequent interventions by system operators. By 2050 all regions are forecast to reach phases 5 and 6 in the APS with longer periods of mismatch between renewable generation and demand with supply needing to be supplemented by dispatchable generation, long-term storage systems or demand management. 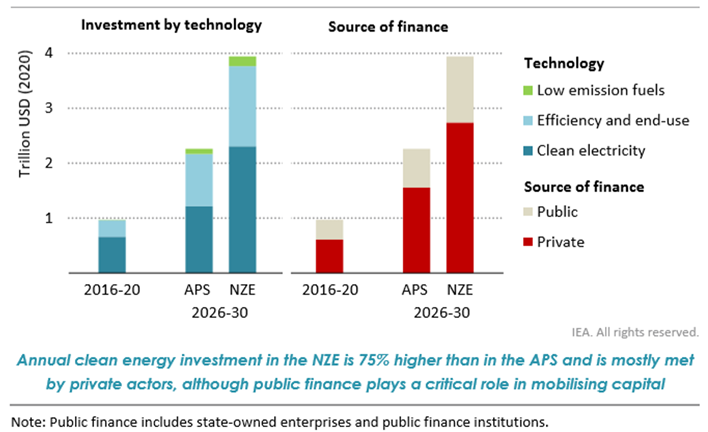 A particular risk to progress towards a lower emissions system could come from higher or more volatile prices for the critical minerals that are used in the manufacture of solar panels, wind turbines, EV batteries and other technologies. Some of the critical minerals include copper, cobalt, nickel, lithium, and graphite. The IEA believes this risk could slow the progress to lower emission systems or simply make the shift that much more costly.

The agency estimates the average amount of minerals needed for a unit of generation capacity has already increased 50 per cent since 2010 with the growth in renewable technologies. In its STEPS (see endnote) scenario, demand for critical minerals for clean energy technologies are projected to nearly triple between now and 2050. While the report’s NZE scenario would require six times the amount of mineral inputs by 2050; demand from EVs and battery storage is expected to jump by “well over 50-times” in the next three decades, while the projected expansion of networks to complement record levels of clean energy deployment could lead to a doubling of copper demand up to 2050.

The rapid jump in demand for critical minerals raises questions about availability and reliability of supply with supply very concentrated and the lack of geographical spread in extraction and processing operations:

“For example, the world’s top-three producing nations control well over three-quarters of global output for lithium, cobalt, rare earth elements. The level of concentration is even higher for processing operations, with China having a strong presence across the board”. 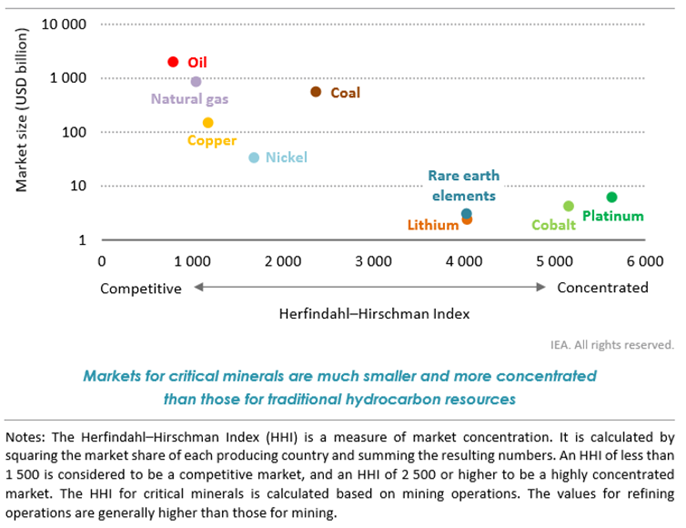 The supply chain risks for critical inputs, including minerals, was also highlighted earlier this year in a White House report. A risk flagged by the IEA is that any higher and more volatile prices or supply disruptions could hamper global progress on cleaner energy grids or simply make the transition more costly.

Some examples of the impact of critical material costs on technologies and projects included in the Outlook include:

While it is unclear how long the surge in prices will continue this year, according to the IEA, a rise of the magnitude seen “would generate upward pressure on total capital costs by 5-15 per cent ... (and) could add USD430 billion to cumulative investment needs for solar PV, wind, batteries and electricity networks over this decade in the STEPS, and nearly USD700 billion” in the NZE scenario.

Trading in critical minerals will grow due to the shift to lower emission grids – the IEA calculates the value of key minerals such as copper, nickel, lithium and cobalt will double by 2050 in their APS scenario from USD120 billion today while in the NZE scenario the value would triple to USD400 billion in the same timeframe.

Australia is among Canada, Chile and Peru as a top exporter of critical minerals while China, Japan, Korea and the European Union are the main importing countries – although China accounts for about half of the imports because of its key role in refining.

[i] The main scenarios: