That trend saw the cost of solar generation fall by an estimated 80 per cent in the decade up to 2020[i].

The initial trigger appears to have been issues with the supply of polysilicon out of China in July 2020 as a result of an outage at major supplier GCL-Poly’s manufacturing facility in western China. There have been subsequent outages at plants in China, with one commentator claiming “they have a bad habit of suffering explosions”[ii]. The outages compounded insufficient supply to meet rising demand on the back of the impact of the COVID-19 pandemic. As with many products China is the world leader in producing polysilicon and solar panels.

Most PV modules require polysilicon. The polysilicon is formed into ingots which are then sliced into wafers. The wafers are further processed into solar cells for assembling into solar panels or modules. China is the world leader in producing polysilicon and solar panels; figure 1 below shows the Chinese percentage of production through this process for silicon-based modules from 2013 to 2021, which highlights issues with Chinese supply have a knock-on effect in the value chain. 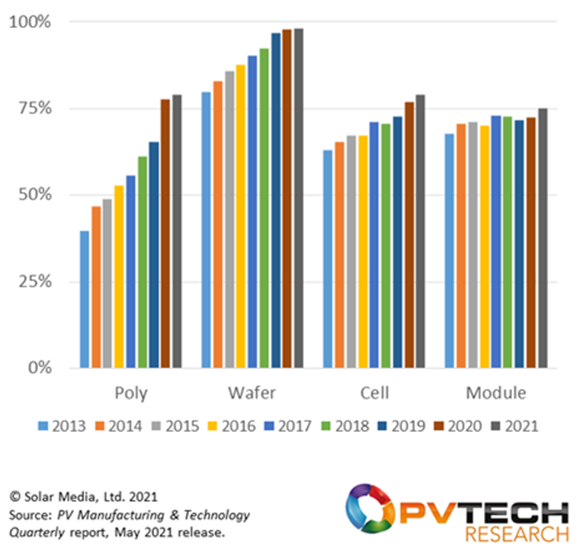 The costs of other materials used in the solar industry, such as glass, iron ore and copper, have also risen[iii] while EVA films and polyvinylidene fluoride used in modules have seen significant price increases over the past 12 months.

Analysts Bernreuter found polysilicon spot prices in the early part of this year have jumped by 160 per cent from US$11/kg to around US$28.50/kg, although it also notes that the price rally is showing initial signs that it will slow. The average price for premium polysilicon currently sits at US$27.63[iv] and the spot price trend line this year is shown in figure 2. 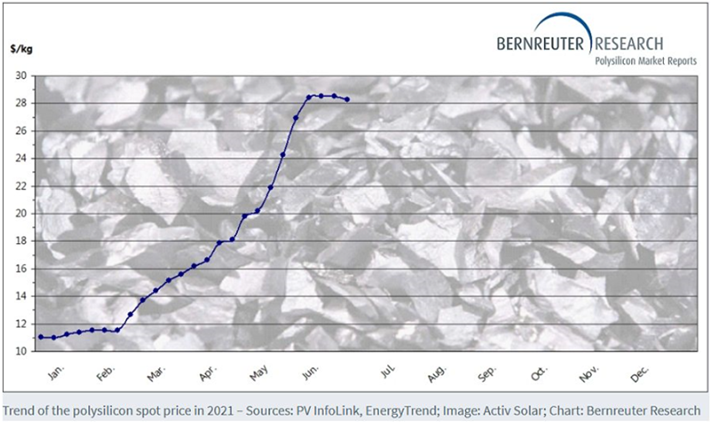 The prices of monocrystalline silicon cells (those most used in Australia) have risen by a quarter since last year, according to Bloomberg NEF data. Though prices remain only a fraction of what they were a decade ago, the increasing cost of solar modules this quarter is the biggest in more than a decade, according to Bloomberg. The price of panel modules is up 15 per cent this quarter while polysilicon is now as expensive as it was in 2012. And according to three solar panel makers in China polled by Reuters, prices for panels have increased by 20-40 per cent in the past year, following the increase in the cost of polysilicon.

Polysilicon capacity is lower than ingot and wafer demand which has increased to 161GW at the end of 2020 with more expansion expected this year. China polysilicon capacity is estimated to be able to support 140GW, while a further 20GW could be met outside China. The resulting cost pressures have been felt through the supply chain as shown in figure 3.

Globally, solar power developers are slowing down project installations according to Reuters. Project developers in the United States, the second largest solar market behind China, told Reuters they are struggling to price projects for 2022 given the lack of clarity on how long price spikes will last. And the US Solar Energy Industries Association has flagged that cost increases across materials are beginning to impact installers.

PV projects in China have been postponed and many EPCs have suspended project development with profit margins squeezed as a result of cost increases[v].

With the upward price trend for modules, orders signed earlier have been renegotiated more recently and the internal rate of returns for solar farms has been impacted forcing many projects to postpone construction, according to PV magazine.

So what are the implications for the rollout of solar PV in Australia?

The installation of rooftop solar continued to increase last year - a record year, despite COVID-19 and the pressures on the supply chain that emerged. Our Solar Report shows that Australia’s rooftop PV market was remarkably resilient with an additional 2.6 gigawatts (GW) and 333,978 installations added to the grid during the calendar year with both the capacity and installations around 18 per cent higher than 2019 (2.2GW and 284,000 installations).

By the end of 2020, almost 2.7 million Australian homes and businesses had a rooftop PV system. Rooftop solar capacity has steadily grown by around 3 per cent year on year between 2016 and 2020, according to Solar Wiz analysis. Green Energy Markets shows rooftop solar added almost 3.25GW last financial year, but notes interruptions to supply chains could begin to present headwinds.

Australia’s large-scale solar capacity also increased last year to a total of 5.4GW across 69 solar farm projects. In the first quarter of 2021, an additional of 450MW of new utility-scale solar capacity connected to the grid from Glenrowan West Sun Farm (132MW), Kiamal Solar Farm (200MW), Yatpool Solar Farm (106MW) in Victoria, and from Robertson Barracks Solar (12.5MW) in the Northern Territory. These are projects that would have been well in train prior to the most recent cost issues emerged.

Panels in Australia use monocrystalline and polycrystalline (or multicrystalline) solar cells which require high purity polysilicon.

It is estimated that the current prices of polysilicon represent an increase in panel costs of around A$37 or 10 cents for a 370-watt panel, which is equivalent to the cost of panels in March 2020. For rooftop systems this would translate into an increase in costs of:

According to Solar Choice the cost to install solar continued to fall throughout 2020 with residential prices down 13.2 per cent and part of a long-term trend. The impact of 2021 price pressure is also shown. 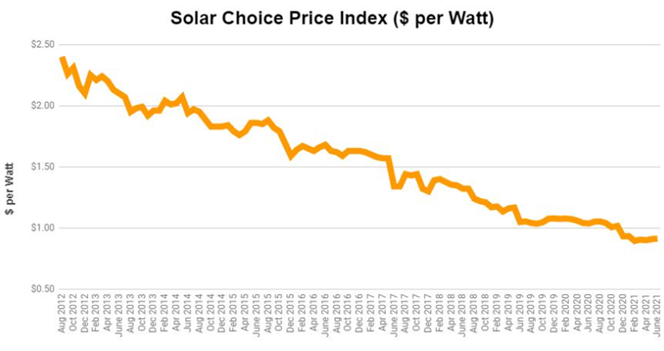 Increased panel costs coupled to lower wholesale prices will give some project proponents pause for thought and they will be monitoring price trends closely. The question is when to push go on a project – and based on higher cost to build and potentially lower revenue, does the business case stack up? The outlook for large-scale solar farms is cooling, according to a Clean Energy Council survey with the council also noting that renewables had a slow start to the year in terms of new commitments and financial closure, which it put down to issue such as the government favouring a gas-led recovery and market interventions.

It’s not certain solar silicon prices won’t rise further, although Bernreuter notes in contrast to previous weeks most price data shows only a small increase of not more than 1 per cent in early June and PVinsights reported many in the polysilicon industry believe prices may have reached a peak.

For residential demand rooftop it remains to be seen is a 10 cent per watt cost increase will have a material impact on the appetite for solar installations, particularly given other factors such as small-scale technology certificates and state-based incentives and the competitiveness of the solar installers.

With savings in equipment manufacturing plateauing and the price pressures in the supply chain further advances in technology will continue to be pursued. With module costs levelling off in the past couple of years, new technologies are being considered to create further cost reductions, according to Wood McKenzie.

Amongst potential developments that could boost solar efficiency Bloomberg points to:

Technical improvements have already seen the amount of silicon required for solar cells drop, these include[vi]:

The polysilicon consumption for each new gigawatt installed in 2020 was only a third of that required in 2006 (see figure 5). 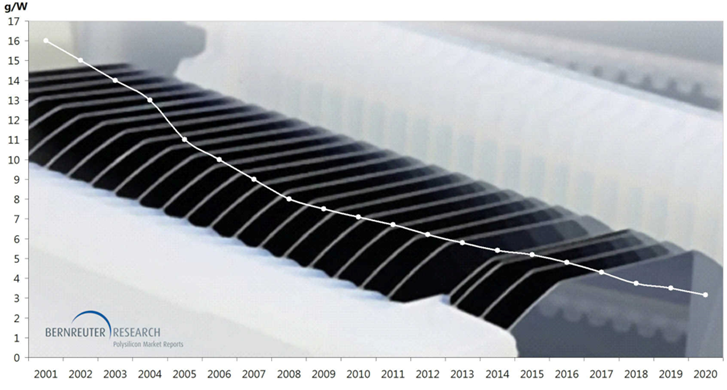