There has been plenty commentary about the implications of coal plant closures following Origin Energy’s Eraring announcement last week, along with earlier announcements from AGL Energy and EnergyAustralia, as well as the “audacious” bid by Brookfield and Mike Cannon-Brookes for AGL with reported plans to accelerate coal plant closures if successful[i].

The announcement of potential early coal plant closures is significant, but it is also not unexpected by the market. It reflects the reality of the changing energy dynamics in Australia. Our energy market is in the midst of a renewables revolution.

Coal plant is retiring faster than the market operator had previously anticipated and current announcements will see more than 5GW of the current 23GW of coal plant capacity leave the market by 2030[ii]. The Australian Energy Market Operator’s (AEMO) step change scenario in its draft Integrated System Plan forecast coal closures could increase to 14GW by 2030 (although this has been contested), while the level of capacity withdrawal under its slow change scenario would be 10GW based on expectations of lower operational demand.

Energy companies, which invest heavily in renewables as well, know the switch to renewable generation has made life harder for coal-fired power stations. This is because they are a more inflexible generation source – they are designed to turn on and run constantly, which makes them a lot less nimble than gas peakers or other forms of generation. This in turn makes it harder for coal plant to operate in a market which is increasingly dominated by generation from lower cost renewables, but which are also variable depending on weather conditions.

Increasing periods of negative pricing and low operational demand driven by renewables complicates the economics of coal plant that are more limited in their ability to ramp up and down with rapid changes in demand. The Australian Energy Regulator (AER) has asked AEMO to reconsider its assumptions around coal plant operations and the ability to operate flexibly on an intra-day basis, given they are known to adopt different daily load profiles. While this may impact the forecasting of the timing of coal exits, it will not change the overall market dynamics at play.

Battery storage and pumped hydro will play an increasingly important role. Large-scale batteries are being proposed to replace capacity as coal plants retire.

There are multiple types of storage as shown in table 1 below.

Table 1: Types and depths of storage 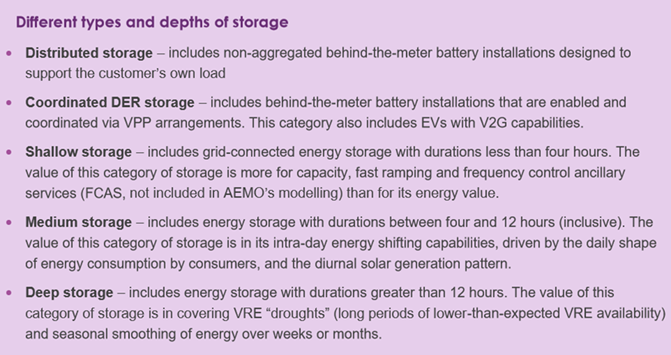 Lithium-ion batteries are effective at providing shallow storage and battery storage systems can be used for a range of network services including load shifting, ancillary services and Frequency Control Ancillary Services (FCAS)[iii].

Aside from small-scale batteries as part of distributed energy resources, there are around 14 large-scale BESS currently in operation or under construction[iv], including the 150MW/194MWh Hornsdale Power Reserve system in South Australia and the Victorian Big Battery (300MW/450MWh) and we are increasingly seeing renewable generation proponents looking at integrating and co-locating them with BESS. Aurecon notes that most new large-scale BESS developments require the support of funding or support mechanisms, but this is expected to reduce as costs fall and energy market price profiles change[v].

The cost of batteries has come down significantly, and in its latest assessment Aurecon revised the capital cost of large-scale 2-hour duration batteries and projected the future cost trend for these batteries (figure 1) based on various scenarios. 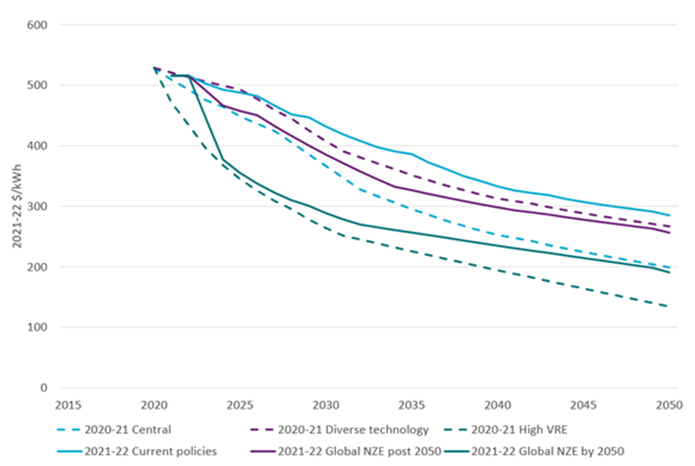 Batteries have sustained cost reductions and historical cost reductions came from deployment in areas like electric vehicles and consumer electronics, according to the CSIRO’s 2021-22 GenCost report. It found that battery current costs saw a 5-6 per cent decline in costs over the previous year, while pumped hydro current cost estimates did not change significantly.

Around a third of homes in the NEM have rooftop PV with around 15GW of capacity. In another decade (by 2032), this is expected to increase to more than half of the homes in the NEM and increase to 65 per cent (69 GW capacity) by 2050, and increasingly as the costs improve rooftop systems are expected to be complemented by battery storage. Home batteries are predominantly used to take greater advantage of solar output, but as they increase in numbers there will be potential for aggregation of energy storage. In its work Aurecon estimated home battery costs to be $13,000 for a 5kW/10kWh system or $1300/kWh, including installation – more than twice the cost of large-scale batteries[vi].

The most pressing utility-scale need in the next decade, according to AEMO, will be for 4-12 hour storage to manage variation in output from renewable generation and meet demand as coal leaves the market.

Pumped hydro is the most mature technology for storage and Snowy 2.0 is expected to provide much of the necessary additional storage depth to 2030 (2000 MW/175 hours), but additional deep storage will be required in subsequent decades to support renewables.

Large-scale vanadium redox batteries are considered to have the potential to complement lithium-ion and other storage technologies for medium storage applications. They offer potential longer duration storage (at least 4 hours). The Yadlamalka project in South Australia, supported by the Australian Renewable Energy Agency (ARENA) is expected to be the first grid-scale battery in Australia using the technology, but will still be only 2MW/8MWh. The largest operational battery of this type is a 15MW/60MWh system in Hokkaido Japan. Large-scale flow batteries have a higher capital cost than lithium-ion but have a longer lifespan. Aurecon has estimated the EPC cost of a 5MW vanadium-redox flow storage system to be $21.7 million (grid connected - 4 hour storage) and $21.4 million when col-located with a renewable plant. For an 8-hour system the cost is estimated at $29.1 million and $28.8 million respectively. The relative energy cost was estimated to be $372/kWh for both durations and whether grid connected or co-located.

Long-duration energy storage is being flagged as a possible storage solution – there are more than 5GW/65GWh of LDES capacity announced or operational, according to McKinsey Sustainability, which has recently released a report into the potential of the technology. LDES types are shown in figure 2. 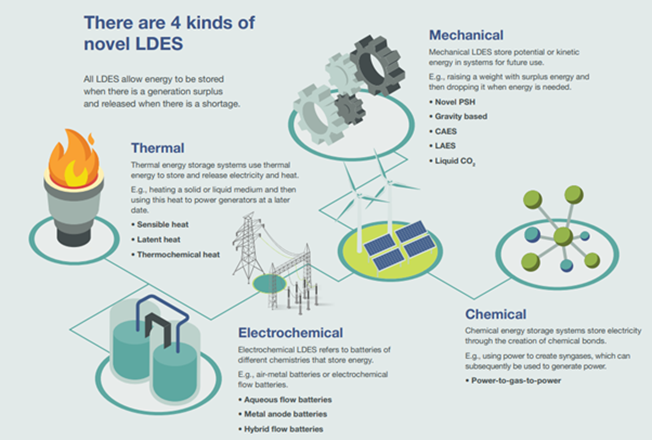 In its most recent GenCost report, the CSIRO provided an update on the cost of storage based on the most common types currently in use and this is shown in the table below.

The total cost basis means the costs are calculated from the total project costs divided by the capacity in kW or kWh. The $/kWh costs fall with increasing storage duration, while the cost in $/kW increase as the duration increases because the additional duration adds costs without adding any power rating to the system – additional duration is most costly in batteries, so batteries are best placed to manage shorter changes in demand, while pumped hydro storage becomes more competitive with longer duration.