The need to better manage the amount of solar PV generation produced on Australian rooftops was one focus of the Renewable Integration Study: Stage 1 report released last week. While outlining the potential for renewable generation in the grid, the study released by Australian Energy Market Operator (AEMO) also illustrates the hurdles that need to be met.

The report flags the mounting challenge that comes from the current invisibility of behind-the-meter solar to the market operator, along with its inability to control the output of an electricity source that exceeds the output of the largest individual generator.

Australia’s rooftop solar capacity is world leading and a significant source of electricity. The National Electricity Market (NEM) has peak demand of around 34GW with generating capacity of 48GW[i] . There is estimated to be 9GW[ii] of rooftop solar in the NEM today and 10.7GW across Australia, which is produced by more than 2.3 million solar installations[iii]. The NEM’s rooftop PV capacity is forecast to increase to 14GW or more in the next 10 years.

So how best to manage this growing capacity?

AEMO devoted an appendix to the issue and has outlined a range of proposals to address the overall system operational risks (shown in table 2). A paramount challenge is that during daytime and particularly on mild, sunny days, significant output from rooftop panels can impact grid loads. Solar PV output can also rapidly and dramatically reduce output or stop producing because of changing weather conditions, while solar inverters can be tripped by voltage fluctuations.

Energy networks are the first to be impacted as local areas see more solar systems installed, but as solar PV becomes significant at an overall system level the inability of the operator to see and actively manage the solar panels can impact “almost all core duties of the system operator in some way – including system balancing, power system stability, and recovery and restoration following major system events”.

The challenge varies by region.  In terms of percentage of dwellings with solar, Queensland has 35.7 per cent and South Australia has 35 per cent[v]. And when assessing how much demand is met by rooftop PV, last year SA reached 64 per cent. It is already the state’s biggest generator with about 1300MW of capacity[vi], and AEMO projects that this could be 84 per cent by 2025. Queensland by comparison met 30 per cent of its demand last year. But Queensland and other mainland NEM regions could be regularly operating at around or over 50 per cent instantaneous penetration by 2025 (see table 1).

Almost a third of all WA homes have solar panels installed and around 2000 are adding a system each month. This has made solar PV (at 1100MW) the largest single source of generation in the SWIS. It means daytime demand falls and becomes more pronounced during mild, sunny days as PV picks up during the middle of the day before falling away late in the afternoon when demand picks up.

Increasing levels of passive rooftop solar generation has started to impact AEMO’s ability to securely operate the SA power system today, and are beginning to impact operation in other NEM regions.

To tackle it, AEMO is recommending that over the next year the sector needs to develop minimum technical standards and device level requirements for rooftop solar to cover power system security, along with cyber security needs, communication and interoperability.

AEMO intends to mandate minimum device requirements for new installations in SA and other NEM regions (while WA will be encouraged to follow suite) so they can be remotely disconnected. It will also investigate whether existing solar PV needs to comply with these regional generation shedding requirements.

On the last point, there is already work underway to fast track the need for all new solar PV inverters in SA and WA (with other NEM regions encouraged) to be able to ride-through voltage disturbances to avoid trips.  There is also a review to assess the need to update existing systems to comply with this requirement, which could involve retrofitting.

It will look to update the national standard for inverters to incorporate “bulk system disturbance withstand and autonomous grid support capability”. Other measures recommended by AEMO are shown in the following table. 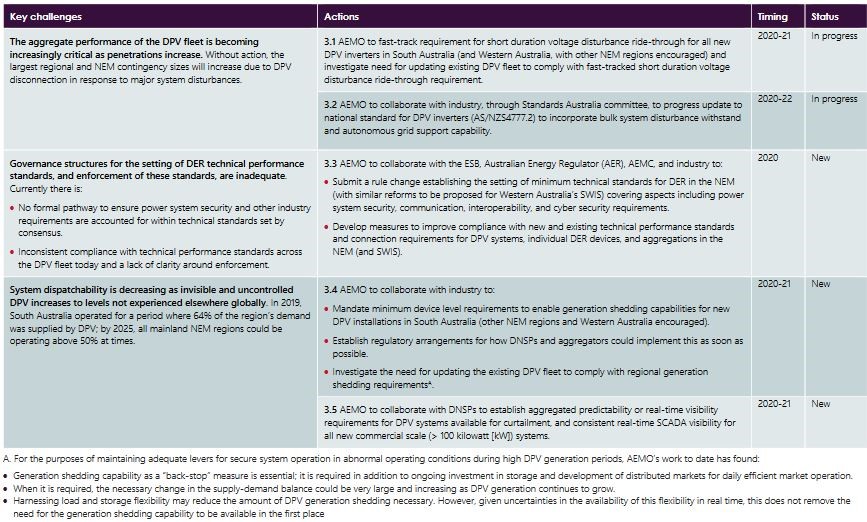 AEMO flags that in the absence of these reforms, it will need to put “hard” limits on passive rooftop solar, which could lead to moratoriums on new installations or costly retrofits of existing systems.

One key action is to establish real-time visibility or better predictability of how much power rooftop solar is providing.

The assessment is that in the longer term, integration of solar PV generation will require active daily management with other distributed energy resources to be able to align load and behind-the-meter generation with overall power system needs.

AEMO notes: “DPV [distributed solar PV] generation shedding capability will require a level of visibility or predictability over the generation available for shedding at any given time in order to quantify the secure technical operating envelope of the power system.”