The Australian Energy Council has released a comprehensive study that explores a market mechanism to support Primary Frequency Response (PFR) from generators and batteries.

The four detailed reports that make up the study – by industry technical consultants, Intelligent Energy Systems (IES) – was jointly supported by the AEC and the Australian Renewable Energy Agency (ARENA) and benefited from considerable additional time investment from CS Energy and Iberdrola. The project also extends from work in 2019-20 that was supported by CS Energy.

Here we look at PFR, some of the regulatory developments since the project began, and how IES’ work will benefit the market over time.

What is Primary Frequency Response?

PFR is the control response to restore frequency to 50.00Hz provided at generators, loads and storage attempting to correct locally measured frequency. Classically, this is sourced from generator governor action.

There are a range of control responses that are necessary to keep a power system frequency secure; some of these are paid for via the Frequency Control Ancillary Services (FCAS) markets. Some are not.

One of the necessary forms of frequency control is the ‘narrow band’ - or ‘fine tune’ balancing - required as demand or variable renewable generators continuously wander between five-minute dispatch cycles. This aims to keep the power system within the Normal Operating Frequency Band (NOFB) of 49.85 to 50.15Hz in all but ‘contingency’ conditions.

‘Contingency’ refers to a major disturbance, like the sudden loss of a large generating unit, and existing FCAS markets are in place to maintain the ability to arrest the frequency after a contingency event.

One form of narrow band control - Secondary Frequency Control - is managed through the Australian Energy Marker Operator’s (AEMO) Automatic Generation Control (AGC) system and is paid for via the Regulation FCAS market.

But despite Regulation FCAS, by the end of the 2010s narrow band frequency performance had become very poor and it became evident that further support was needed through Primary Frequency Response (PFR). This is where these fine tune frequency corrections occur directly: at plant level as soon as they are detected by a governor, and not controlled via AEMO’s AGC, which tends to be too slow for the conditions of today’s National Electricity Market (NEM).

What has been done about it?

With a series of reviews and debates across 2017-2020 about how to recruit narrow band PFR, AEMO believed the best way to manage the frequency was to oblige PFR from every technology reasonably capable of doing it. This way, the effort is socialised across many sources so each individual effort is minimised, while the frequency outcome is maximised. Although it wasn’t the case in the NEM, a broad obligation to support PFR was common in many overseas power systems including Western Australia.

But such an arrangement also has downsides, as it might be more efficient to rely on fewer players voluntarily doing more in return for an incentive.

In 2019, AEMO successfully proposed a rule to impose the widespread obligation into the NEM without any payment. All capable scheduled and semi-scheduled generators and batteries are subject to an obligation to provide PFR down to a near zero dead band. There were, however, limitations to the PFR obligations:

While the Australian Energy Market Commission (AEMC) accepted AEMO’s urgent need for the rule, it was given a 2023 sunset, allowing time to introduce a more market-based mechanism as an enduring arrangement.

As soon as the obligation was rolled out on the NEM’s largest coal units, the narrow band frequency control improved dramatically. This is not surprising: large steam units are very good at this sort of control, and in the NEM at present there are always coal-fired units operating with considerable headroom (and foot room) to effectively manage frequency. The obligation has since been rolled out on other technologies, but it is clear that coal is doing the bulk of PFR.

What is the long-term plan?

Under another AEMO rule change, the AEMC has been contemplating the enduring arrangements for procuring PFR. The market operator strongly argued to make the mandatory arrangements permanent, and the AEMC agreed in their draft determination in September 2021.

However, the AEMC also received expert advice that the mandatory arrangement’s effectiveness will reduce as coal declines. To combat this, an incentive arrangement is necessary to encourage participation from other sources. Batteries, in particular, have the capability to effectively provide PFR even when at rest or charging, although this is at a material cost to them (loss of battery life).

In the lead up to their final determination in mid-2022, the AEMC is investigating ways to provide that incentive, and is drawn to the decentralised approach broadly proposed by the Double-sided Causer Pays (DSCP) work that CS Energy, then the AEC, instigated.

The approach borrows a concept from the existing “Causer Pays” technique that is used to determine how to allocate the cost of the FCAS Regulation services. In this system participants are assessed every four seconds to see how they are deviating from dispatch target trajectories. 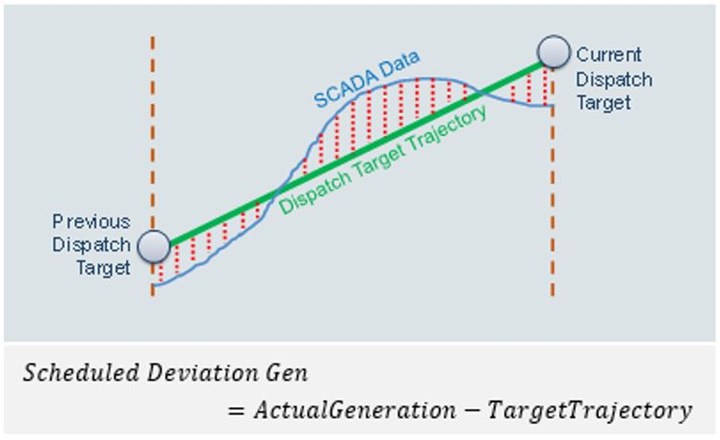 In the existing Causer Pays approach, if participants deviate from their dispatch trajectory in a way that makes the frequency worse (they are below target when the frequency is low, or vice versa) then a penalty is determined for the participant. The penalty is the product of the volume of the deviation and the size of the frequency error measured during that four second interval.

These penalties are then accumulated over four weeks. Participants then must fund AEMO’s FCAS regulation costs in the following four weeks, in proportion to the size of the penalty they previously accrued. So, it charges those who “caused” the deviations that created the need for the FCAS regulation service in the first place. There are obvious limitations to that existing arrangement, such as:

The IES approach uses the Causer Pays concept, but without the two limitations above.

This way, generators mandated by the new rule to provide PFR can be rewarded in accordance with their actual observed performance, creating an incentive to perform.

Note that unscheduled demand, forecast by AEMO, also contributes to the frequency error. AEMO’s demand forecast is effectively a ‘dispatch target’ and to the extent actual demand varies from it, this affects frequency in the same way as a generator missing its target. In both the existing process and DSCP, demand is treated the same way as a generator. Demand Causer-Pays costs (or possibly rewards) are passed on to customers as a class.

The IES’ work is described in four reports, published by the AEC:

IES also conducted a Knowledge Sharing Workshop at the start of the project and will conclude with a workshop in March.

The project looked at upgrading the systems for promoting and paying for good frequency control in the NEM. Based on Frequency Deviation Pricing (FDP) concepts, the proposed system complements and extends the current arrangements which mandate a primary frequency control capability and reserve units for slower moving control. It also replaces the current system for paying for regulation that, in recent years, has declined in effectiveness.

The project made explicit arrangements for industry engagement through knowledge-sharing workshops attended by industry regulatory and management bodies as well as industry participants. There has been ongoing liaison with the AEMC and AEMO to examine the design details that are to be implemented in a reform package for enduring frequency control arrangements.

The Final Report includes a discussion of the Frequency Deviation Payments (FDP) alternative approach, as presented by the AEMC in its September 2021 draft determination. One FDP simulation modelling scenario (Final Report, Appendix D) shows the 2021 base case. Figure 2 below shows a simulation over one-hour for this case. 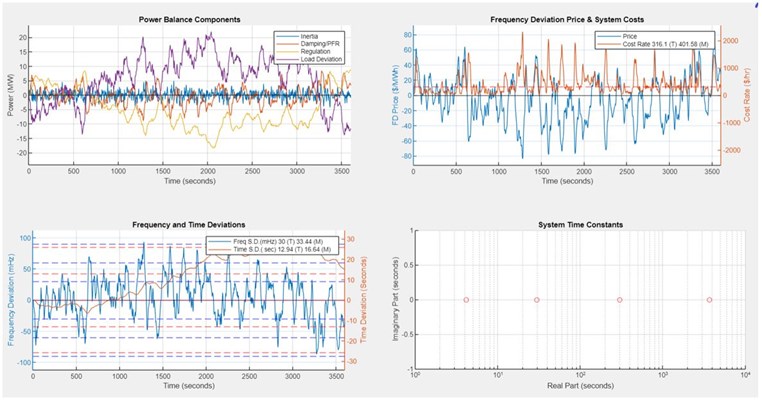 The 30mHz theoretical target is confirmed in the Frequency and Time Deviation chart (bottom left) with the standard deviation over the one-hour measured as 33.44mHz. Of note are the time constants (TC), reflecting the nature of the lags present in the current real system:

A system with high battery presentation was another modelling scenario; for this case the cost of ramping RCost is reduced by a factor of 100. It models the rapid ramping capability of batteries and makes no attempt to model lifetime issues. Shown in Figure 3: 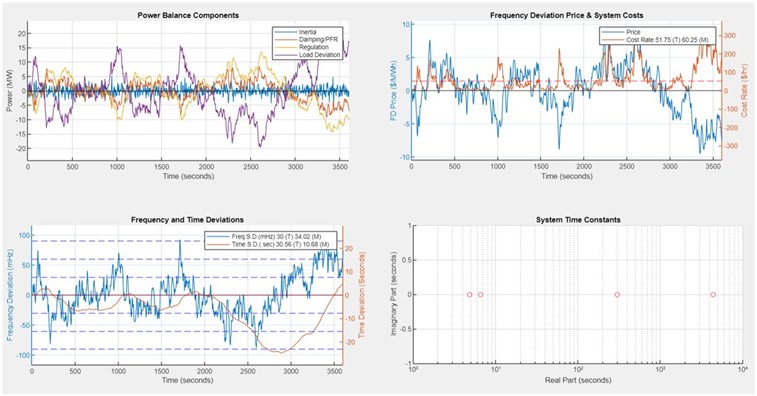 The rapid response capability of batteries as an interesting conclusion from the study, as it does not present an inherent problem for a system with high inertia. The batteries can, and do, adjust to the slow responding system. Metering at four seconds is adequate (given the model assumptions).

When the project was originally launched, the AEC and IES envisaged that DSCP would operate post the 2023 sunset, without any obligations on generators to provide PFR. It was hoped that the DSCP incentive would be enough for conventional generators and batteries to voluntarily provide it, while those who found it difficult (like wind and solar farms) would likely elect to not participate.

However, the AEMC’s draft determination chose to delete the sunset, which might be thought to remove the need for DSCP, but this is not the AEC’s or IES’ view. The decision defers, but in substance, does not remove the sunset: the obligation only works thanks to those generators facing a sunset of their own. An incentive is needed to encourage new forms of frequency control to emerge. Hence the AEMC were right to look for an incentive mechanism and proposed some initial thoughts in their draft determination.

The AEC and IES believe those thoughts can be refined into a workable mechanism by considering and building upon the detailed lessons learned in the DSCP project – and the AEMC is doing just that.