What is “Effective Competition” and do price caps help or hinder?

Energy affordability has been on the radar in Great Britain (GB) in much the same way as in Australia with questions being raised about the benefits of the competitive market and the level of household bills attracting increasing amounts of political attention.

So it’s not surprising that the approach taken in GB has uncanny parallels with Australia – the concerns about affordability led to a major inquiry into the retail market by the competition regulator (the Competition and Markets Authority (CMA) in the case of GB, and the Australian Competition and Consumer Commission locally), other reviews of the cost of energy and the introduction of price caps for residential customers.

In the case of GB, the price caps were set down in law and imposed from January this year - six months ahead of the default market offer introduced to the National Electricity Market and Victoria’s Default Offer.

The GB caps are only in place until 2023 unless the key government regulator, the Office of Gas and Electricity Markets (Ofgem) recommends to the Secretary of State that they be removed sooner. Ofgem clearly views these price caps as a temporary measure, unlike the default offers in Australia.

Around 53 per cent of residential customers are on default offers, excluding prepayment meter customers, while 49 per cent of GB customers have never switched or have only switched their retailer once[i]. In Australia by comparison six, nine, 14 and 15 per cent of small customers were on standing (or default) offers in Victoria, South Australia, New South Wales and South East Queensland respectively at the end of last year[ii].

Ironically, the GB default price cap started during a period of record switching, increasing market innovation[iii] and falling market concentration. Ofgem’s most recent State of the Energy Market shows that switching rates (or churn) continued to grow 20 per cent in the year to June 2019 up from 19 per cent the year before. They have been increasing since 2014 and, according to Ofgem, the current rates are high compared to other utility sectors and retail energy markets around the world. Previously Norway had the highest European churn rate of 19 per cent, while the highest churn in Australia is in Victoria - according to the Australian Energy Market Operator, 27 per cent of Victorian residential and small business electricity customers switched retailers last financial year[iv].

The question of how to define effective competition is a challenging one that regulators in Australia are yet to grapple with.

The question of how to define effective competition is a challenging one that regulators in Australia are yet to grapple with.  In contrast, GB’s Domestic Gas and Electricity (Tariff Cap) Act 2018 requires Ofgem to review whether conditions are in place for “effective competition” for domestic supply contracts before it can recommend that the price cap be lifted early. This first review must be published by 31 August 2020 and include a recommendation on whether the cap should remain in place for 2021, or be removed.

So now the regulator has the fraught task of identifying what “effective competition” looks like. It has prompted Ofgem to release a framework[v] that tries to define just that, but has that has raised concerns for highly experienced competition and energy sector experts (more of that below).

In its proposed framework Ofgem has defined effective competition as set out in Figure 1 below along with the conditions that would be in place. 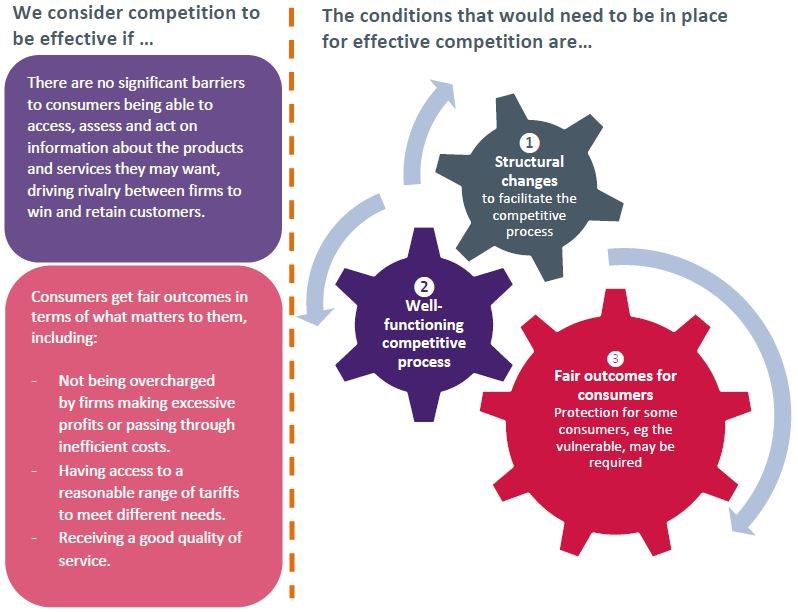 The framework sets out three conditions that would need to be in place:

Ofgem has outlined possible indicators to help its assessment of effective competition and these are shown in Table 1.

Table 1: Assessment of the conditions for effective competition 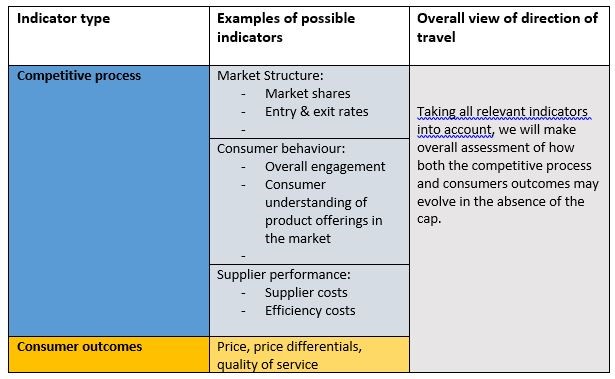 To assess whether the conditions have been met, the regulator said it will compare indicators “in the round” and assess the “direction of travel” across the various metrics[vi].

Figure 2 shows the full framework as set out by Ofgem.

Figure 2: Framework for assessing whether conditions are in place for effective competition 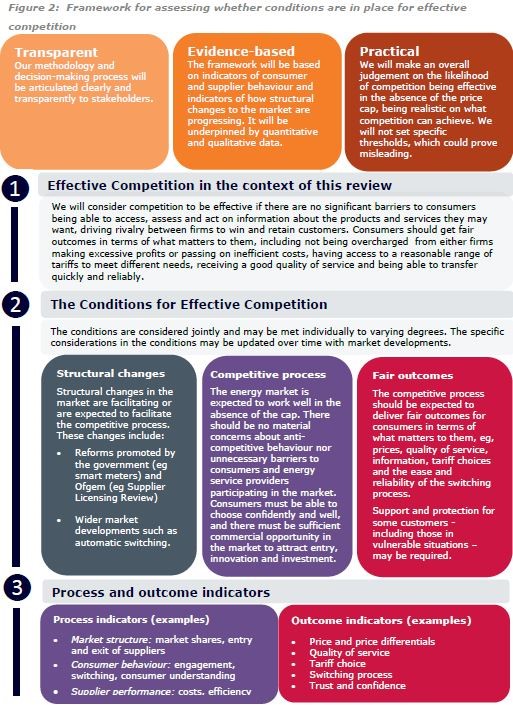 Ofgem says it may take time for competition to become effective and that it won’t recommend the caps go unless it is confident the market can deliver “fair outcomes” for consumers and that “we have identified protections that can be implemented in a timely manner for those who, for whatever reason, do not engage in the market”.

Yet in October last year the CMA did not see competition issues when it cleared a proposed merger between SSE (the second largest retailer) and npower (both members of GB’s “Big Six” energy firms)  without conditions. This was subsequently called off with the companies citing challenging market conditions, including the number of customer switching provider[vii]. SSE has since proposed a sale to another retailer Ovo. This is subject to regulatory approval.

Ofgem’s approach has raised a red flag for several former regulators, among them Professor Stephen Littlechild[viii]. They are concerned that what is being attempted is to design a new concept called “effective competition that embodies socially desirable outcomes, rather than the regulator simply reporting on whether competition would be effective with the removal of a price cap”.

In their response to the discussion paper, as well as the CMA’s earlier Energy Market Investigation (EMI) Report, it was implied that it is not the case because of factors like a “two-tier” market, excessive price differentials, excessive profit margins, inefficiency and slow adjustment.

“We are not convinced by these suggestions. On the contrary, the competitive market process seems to be working well over time. Competition could be made more effective, not only by removing the tariff cap, but also by removing two present distortions in the regulatory framework. These are associated with exemptions for small suppliers and with compliance procedures for environmental obligations,” the former regulatory heads said.

Others[ix], such as Energy UK, GB’s energy industry trade association, said that Ofgem’s proposal did not recognise that effective competition delivers different outcomes for different customers, which is a feature of all competitive markets. It also had a concern that if a large number of indicators are being used to determine whether competition is in place it will become extremely tough to conclude whether, “in the round”, the conditions are in place to lift the caps.

While there are customers who find switching difficult, particularly more vulnerable customers, it also argues, there are other ways these customers can be helped and targeted[x].

The state of play

Ofgem’s most recent energy market report shows that 12 suppliers exited the market. It notes that the implementation of the default tariff cap “is unlikely to have triggered these exits, as the suppliers who exited the market had relatively few default tariff customers. Nevertheless, the DTC may affect overall expectations of future revenues and costs associated with running a domestic supply business”.

During the year, medium suppliers expanded, increasing their ability to exert competitive pressure on the GB’s  Big Six.  “They achieved a net gain as a group of 1.9 million customers, and their combined market share reached above 20 per cent, up by nearly seven percentage points”.

The increased awareness of default tariffs and caps because of increased media exposure may have acted as a prompt for customers to consider switching, based on Ofgem’s assessment.

As with Australia, less engaged consumers tend to be on more expensive tariffs, but the trend over time is for more customers to move away from default tariffs. The proportion of GB customers on these tariffs, which was around 69 per cent in 2015 and gradually fell to 53 per cent by April 2018.

In Great Britain the regulator has been placed in a difficult position – defining what “effective competition” looks like. The assessment will have to balance what may be considered good outcomes for some with not creating too broad a requirement and actually damaging competition. It will also have to manage the fraught political imperatives now at play.

The regulator has suggested that it will determine the “direction of travel”, rather than set thresholds using the empirical data[xi]. Regardless this will not be easy going, but it is certainly going to be fascinating to see how the GB market emerges from this.