Victoria's Essential Services Commission (ESC) released its most recent quarterly report last Friday, and in doing so sought to highlight that energy prices are rising, along with disconnections in Victoria. The report showed that 12,718 Victorian households (representing around 0.57 per cent of all electricity customers) were disconnected in the most recent quarter from an essential service, 2,000 more than in the previous quarter.

Figure 1: Customers disconnected for not paying their energy bills 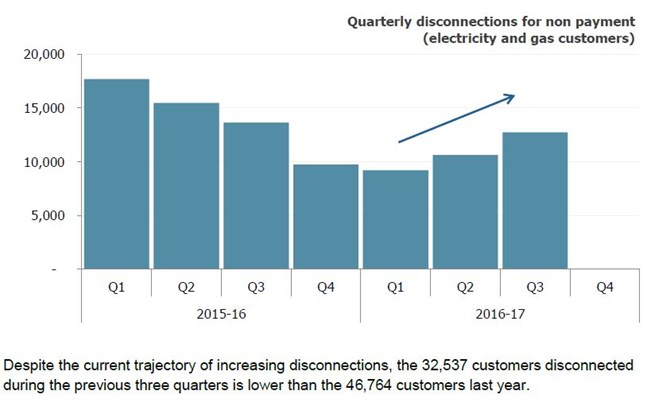 However, a closer look at these figures reveals a more positive picture – although it is true that disconnections increased by around 2,000 since October - December 2016, overall the 32,537 customers disconnected during the previous three quarters is lower than the 46,764 customers last year.

The ESC also noted that of the 12,718 reported disconnections, only 141 customers were reported to have been wrongfully disconnected during that same period of January - March 2017 in Victoria (the previous quarter registered 164 wrongful disconnections, and the quarter prior to that 215).

Meanwhile, in its quarterly publication released in May 2017, Victoria’s Energy and Water Ombudsman reported that it had processed 222 electricity disconnection cases in January – March 2017, up from 207 cases in the same quarter for 2016. While this is a slight rise, it’s worth noting that the volume of 2017 cases represents a 30 per cent reduction on the number of cases reported for the same quarter in 2015.

The Victorian Energy Minister is often quoted referring to disconnections as ‘too high’, and certainly no political points would ever be lost by suggesting that fewer customers should face disconnection. Retailers agree that disconnection should be a last resort. However, it is not correct to suggest that this is a new and escalating issue – in fact disconnection figures overall for electricity in Victoria are more or less stable - quite a feat considering the ever-increasing wholesale price and ongoing market uncertainty. Wrongful disconnections in Victoria are also trending downwards.

It may be no coincidence that the ESC and the Victorian Government are framing disconnection figures as a problem which requires its collective response. This positions neatly with their policy reform programme - since the release of the 2016 Inquiry into best-practice financial hardship programs of retailers, the ESC has been working to reform the regulatory framework which governs how retailers must deal with customers in financial hardship in Victoria.

Section 44 of Victoria’s Electricity Industry Act requires retailers to develop hardship policies, and the Act includes a range of criteria to be addressed, such as the need to submit the policies to the ESC for approval, and for deemed licence requirements relating to hardship policies. Further regulatory provisions are provided in the accompanying Energy Retail Code, which enables retailers to disconnect customers for non-payment of a bill only after a strict procedure has been adhered to. This includes sending the customer a reminder notice and a disconnection warning notice.

In addition, on 1 January 2016, Victoria’s energy industry legislation was amended to include a new objective for the ESC: to promote protections for customers, including in relation to assisting customers who are facing payment difficulties.

The 2016 Inquiry into best-practice financial hardship programs of retailers found that existing hardship programmes were ineffective in reducing customer debt. The ESC’s subsequent and ongoing efforts to reform the Energy Retail Code in relation to hardship programmes has been a challenging process for industry and the community sector alike. Although the ESC is moving closer to a finalised new framework, retailers are continuing to work through the detail of the proposed reforms to determine whether they are workable, and most importantly, whether they will actually benefit those consumers experiencing severe payment difficulties.

On its face, the Victorian Government’s request that the ESC have particular regard to reducing disconnection rates amongst hardship customers in the electricity industry is a positive goal which is supported. Ideally there would never be a need to disconnect an electricity account.

Retailers have established programmes to ensure customers in payment difficulty are dealt with respectfully, and this includes following processes which manage the threat of increasing debt or disconnection. An increased policy emphasis on the prevention of disconnection, however, risks higher customer debt as customers are kept on supply indefinitely, while continuing to build up additional debt. This has ramifications for both retailer processes and the customer experience.

The difficulty that customers have in paying down outstanding debt is highlighted in the ESC’s report which noted that, of the customers participating in hardship programs in the last quarter, 41 per cent had debts of over $1,000 and more than a third of hardship program customers with payment plans are on these plans for one to two years.

These figures are concerning. While disconnection is only used as a last resort, retailers understand that for some customers, a disconnection warning notice can act as a useful catalyst for communication with a retailer and often encourages a conversation which produces manageable and agreed payment plans. If the ESC’s new framework limits a retailers’ ability to engage with customers early in the debt cycle, then customer debt levels may rise to even more unmanageable levels for those customers who will have the greatest difficulty meeting them.

Any new hardship framework which allows customer debts to rise without checks, and simultaneously constrains the retailer’s ability to engage with the customer should be avoided. Retailers cannot be expected to remain unpaid for large customer debts, nor should vulnerable customers who may have been able to manage their debt with earlier intervention, suffer credit risk and other stressful consequences as a result of letting their energy debt levels spiral. Every day retailers are dealing with customers for whom increasing household cost pressures are having a major impact on their lives. These cost pressures are much broader than energy. And like both State and Federal Governments, the energy industry possesses no silver bullet to resolve them.