Smoke on the solar: The impact on generation

The extreme weather conditions that led to massive bushfires occurring on both Australia’s south east coast last summer and across California more recently has had a dramatic and far reaching impact on people and communities.

The electricity grid was also not immune from the effects of the bushfires. In Australia, the fires forced the temporary disconnection of New South Wales from Victoria. Extreme weather-related events and conditions can and do impact all forms of generation.  A heatwave in California led to rolling blackouts earlier this year (See California dreaming of secure supplies, EnergyInsider 27 August 2020)

One area that has come into focus following the bushfires has been the impact of smoke on solar PV output.  It has been estimated that the output from rooftop solar PV systems in Sydney and Canberra dropped by 15-45 per cent on heavy smoke haze days as a result of the fires[i].

Meanwhile the Australian Energy Market Operator (AEMO) has collaborated on a study to assess the extent of power loss from large-scale solar farms caused by smoke haze, and recent data from California’s Independent System Operator (CAISO), which covers 90 per cent of utility-scale solar capacity in that state, also shows the impact of bushfire smoke on solar output.

Bushfire smoke carries very small, particulate matter generally 2.5 micrometres (0.0025mm) wide, or smaller, and known as PM2.5[ii] which, like cloud cover, cuts down the amount of sunlight that can reach solar panels. A better understanding of the potential impact on solar generation in areas prone to major bushfires will be important in future planning of the power system, particularly as more solar enters the grid.

AEMO collaborated with energy data analysts and modellers, Amperon, to assess the impact of bushfire smoke on the output from 20 large-scale solar farms in New South Wales, Victoria, the ACT and South Australia (shown below). 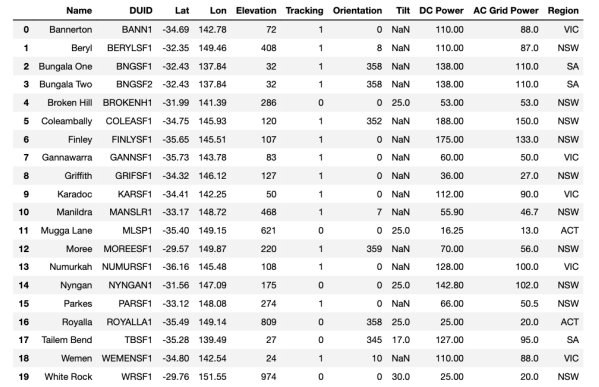 The study found that during December last year and January this year there was a mean decrease in output of 4.1 per cent, due to smoke plumes. The biggest recorded impact was in the ACT where the solar farm generation fell 10.3 per cent overall.  The two solar farms near Canberra (Royalla Solar Farm and Mugga Lane Solar Park) saw generation fall 8.6 per cent and 12 per cent respectively during last December and January 2020 as a result of aerosols or PM2.5. 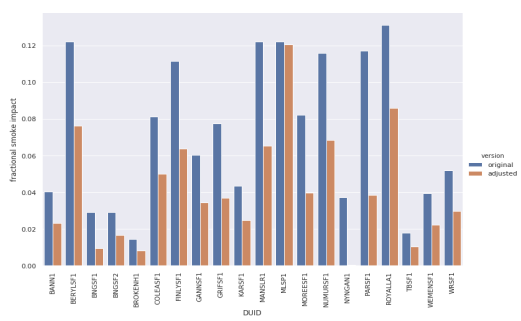 The study notes that while bushfires in NSW began in August last year, simulations only showed generation dropping off significantly due to smoke starting in November.

Amongst data sources, the study used SCADA[iii] electricity production data for the solar farms, as well as estimations of the generation for each of the farms, calculated using a software package that simulates the performance of PV systems based on the farms’ specifications and solar irradiance data. In assessing smoke and haze levels it used PM2.5 measures and estimates of solar irradiance with and without aerosols from NASA’s GEOS-5[iv]. The study also considered each solar farms’ layout, inverter types, panel angles and orientation and other factors.

The map below shows the site for each solar farm and the impact of smoke based on the average of both the NASA and PM2.5 data and highlights the impact on solar farms in the ACT, south east NSW and northern Victoria.

Figure 2: Map of final adjusted smoke impacts for all solar farms (averaged over both smoke sources) 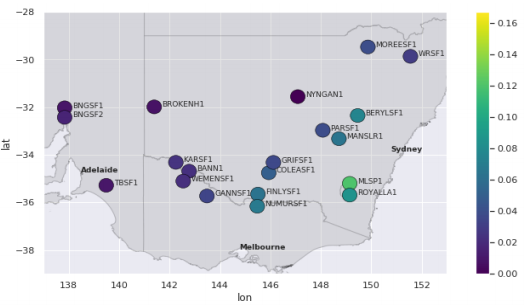 Amperon comments that the study “provides a first glance into the effects of smoke from an abundance of bushfires on large-scale solar electricity generation… and hope the results… can serve as a guide for future planning”.

A separate assessment of the impact of south east Australia’s bushfires on rooftop solar shows a drop in generation of up to 45 per cent in Canberra. The assessment is based on monitoring of the energy consumption and solar PV performance of 35,000 sites across Australia by software company, Solar Analytics[v].

It estimates that on 1 January PV output in Canberra fell by 45 per cent – this was on a day with heavy smoke haze and a massive Air Quality Index (AQI) reading of more than 3400. Sites in Sydney showed a drop in output of between 15 per cent (10 December) and 27 per cent (21 December) when the city was impacted by bushfire smoke.

According to Solar Analytics’ data, median energy generated at 2200 Sydney sites on clear days during the first two weeks of December last year was 26.6kWh. On 10 December 2019 median generation was 22.7 kWh. The estimated drop in output reported for 21 December was based on a comparison with 17 December 2018, which was a clear day.

A recent Californian report by the US Energy Information Administration (EIA), also provides some insight into the potential for smoke haze to impact solar output. In California in the first two weeks of September with wildfires burning across the state, the average solar generation from utility-scale solar farms fell substantially based on the CAISO data. The CAISO system covers more than 90 per cent of the large-scale solar farms in the state and generation from those sources fell nearly 30 per cent from the July 2020 average. Those first two weeks of September coincided with peak PM2.5 readings caused by the state’s widespread fires.

The US EIA[vi] reports that PM2.5 levels began increasing in mid-August and reached a record high of 659 µg/m3 on 15 September based on California Air Resources Board data. This was also the highest level since records started in 2000.

The correlation between increases in PM2.5 levels and solar output for the state is shown in figure 3 below.

For July daily solar output from solar PV and solar thermal plants ranged from 104GWh to 119GWh. The daily output began declining as large wildfires broke out in mid-August and reached a low of 68GWh on 22 August before moving back up to around 100GWh by the end of the month. With an increase in wildfires in September, output fell to as low as 50GWh on 11 September as smoke pollution climbed.

Offshore wind patterns were a factor in California’s reduced solar farm output. The winds pushed smoke from the fires, which were concentrated in the state’s north and central regions, south where most of state’s solar capacity is located.

The Californian data does not include generation from small-scale solar PV, which has reached 9.8GW of capacity.

[iii] It notes that for nine solar farms availability was variable and unknown or generation was curtailed for extended periods, making the SCADA data “practically unusable as a reference” and for the other 11 sites there was no reliable data source or timeseries stating the available capacity of the solar farms, “which forms an uncertainty in the interpretation of SCADA data”.