California has been grappling with a challenge familiar to parts of Australia’s energy market –  how to make a seamless transition to a lower carbon grid. In California, as with South Australia in 2016, the transition was put to a stress test by a weather event. In the case of the US state it was a heatwave described as one of the worst in years leading to rolling blackouts.

And in another echo of SA’s experience, following the load shedding the state has turned to gas generation as part of its solution. California appears to be on the verge of allowing four gas-fired plants which were required to close at the end of this year to remain in operation for 1 to 3 years. Those plants have a capacity of 3750MW[i]. The California Public Utilities Commission sought to have their operational life extended due to concerns about potential supply shortfalls, while California’s Governor, Gavin Newsome, has said the state cannot afford to “sacrifice reliability”.

So how did California get to this point?

California has seen a rapid shift to renewables in its generation mix which has been further reinforced by the passing a law in 2018 that mandates that 50 per cent of the state’s electricity should come from renewables by 2025 and 60 per cent by 2030. The policy also requires RPS-eligible sources and zero-carbon resources to supply 100 per cent of California’s electricity retail sales and electricity procured to serve state agencies by 2045. Zero carbon sources include nuclear, although the state’s last nuclear plant Diablo Canyon (2240MW) is scheduled to close in 2025[ii].

The California Energy Commission (CEC) estimates 36 per cent of the state’s retail electricity sales were provided under this Renewables Portfolio Standard (RPS)-eligible sources such as solar and wind last year. That exceeds California’s requirement for 33 per cent of retail sales to come from RPS-eligible sources by this year[iii]. The state passed the 2020 RPS target two years ago.

Since 2013 more than 11GW of firm plant – gas and nuclear – has exited the market, while the state now has more than 11GW of solar PV[iv]. The change in California’s generation mix is shown below. With the shift in its generation mix, California has become more reliant on importing power from neighbouring jurisdictions at times of high demand or reduced in-state supply. 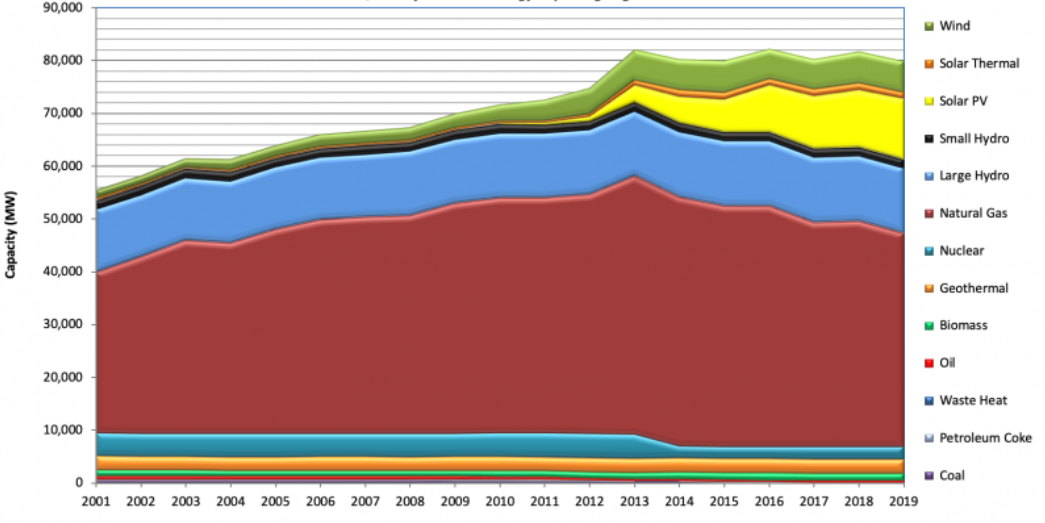 The California Independent System Operator (CAISO) anticipated high loads and temperatures beginning on Friday 14 August and tried to avoid shortfalls in supply by issuing an order restricting maintenance operations ahead of these conditions on 12 August, and followed with an alert of a possible system reserve deficiency on 13 August and then a “flex alert” for 14 August. The flex alert seeks voluntary demand response.

As the situation deteriorated on the afternoon of 14 August with unanticipated loss of supply and severe constraints on imports because of the widespread heat wave and higher demand particularly as households increased air conditioner use. CAISO declared a state-wide Stage 3 emergency at 6:36 pm, ordering utilities to implement load shedding to protect the stability of the grid. By 7:51 pm, the grid had stabilised, with 1GW that had been taken out of service being restored. The emergency declaration was lifted at 8:54 pm. Peak demand on the day reached around 47GW.

The following day CAISO again declared a Stage three emergency at about the same time (6.28 pm), again due to increased demand as well as the loss of a 470MW power plant and the loss of 1GW of wind generation[v]. Stage two emergencies were also declared on Monday and Tuesday (17-18 August). These flag the risk of further potential rolling outages, but were avoided through reduced demand and cooler weather[vi]. Maximum demand on Saturday 15 August was estimated to be 45GW[vii].

The system operator also issued a series of flex notices over following days and asked consumers to set air conditioner thermostats to 78 degrees Fahrenheit (around 25 degrees Celsius) or higher, turn off unnecessary lighting and avoid using major appliances. The impact of the demand response on subsequent days is shown in figure 2 below. 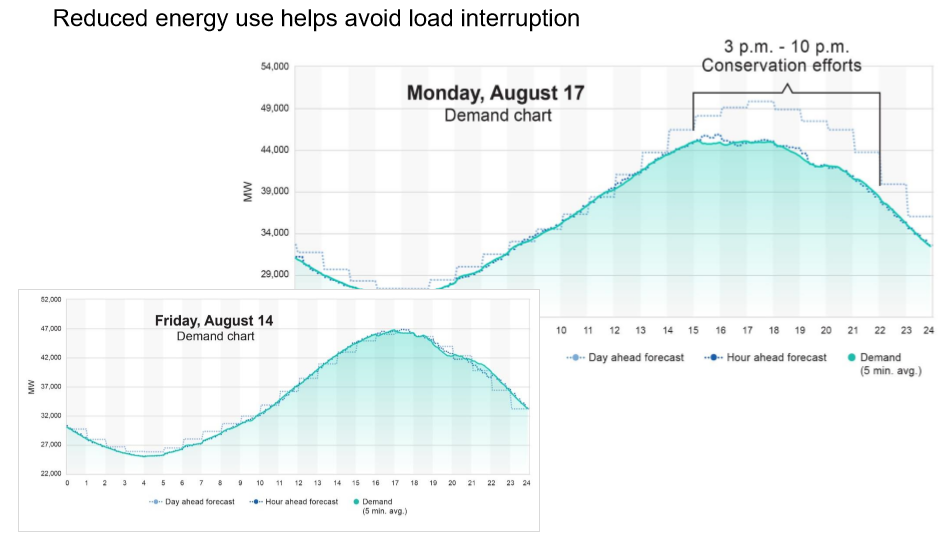 In the wake of the load shedding Governor Newsome has sought an investigation by regulators[viii], while finger pointing began as to the cause. Frank Wolak, an economics professor and energy-markets expert at Stanford University, said California policy makers completely forgot the lessons from its 2001 energy crisis and had left the state exposed to buying large amounts of imported electricity on the spot market on days of extreme demand[ix] .

While yet to finalise a full review into the root cause, in an initial response to the Governor, California’s energy agencies pointed to the need for forecasts and planning reserves to take better account of the increasing risk of extreme weather events and the heavy reliance of the state on imports to meet demand in the late afternoon and evening periods[x]. On hot days peak demand occurs in the late afternoon, as households turn on air conditioning and other devices around 5 pm with this demand surge occurring just as solar PV output falls away.

CAISO had warned of the potential risk to supply in its summer load and resources assessment[xi] which was released in May. In particular CAISO pointed to:

Other risk factors CAISO has pointed to as the supply demand equation has tightened include:

We will now watch for the detailed assessment of key factors behind the load shedding and next steps to address supply for future. It is likely to provide lessons for all systems in transition.