On 20 August the Australian Energy Market Operator’s (AEMO) latest invitation to tender for long notice Reliability and Emergency Reserve Trader (RERT) for the coming summer in Victoria and South Australia will close.

The RERT is a safety net mechanism through which AEMO can obtain additional supply capacity to meet a forecast shortfall against the reliability standard (<0.002 per cent of demand not met in a financial year). This supply is then held out of the market and used as a last resort to avoid involuntary customer interruptions. The cost is then recovered across all customers in the affected regions.

It follows the use of the RERT last summer (which we have previously written about in The RERT Locker and Planning for Summer: What have we learnt). That was only the fourth time that it had been invoked. The cost of that intervention has been previously discussed, but last week AEMO updated its cost information on the program and it is clear that the most recent invocation dwarfed the previous spending.

In its updated figures AEMO reports that the RERT cost was $51.99 million[i], with more than $50 million of the costs coming from Victoria (and being passed on to Victorian electricity customers). More than 600MW of demand response with a further 104MW of emergency generation was acquired in Victoria (out of a total of 1141MW[ii] ). The remaining $1.2 million was attributed to South Australia.

A break-down of the costs is shown below:

The make-up of last summer’s RERT is shown in Figure 1. 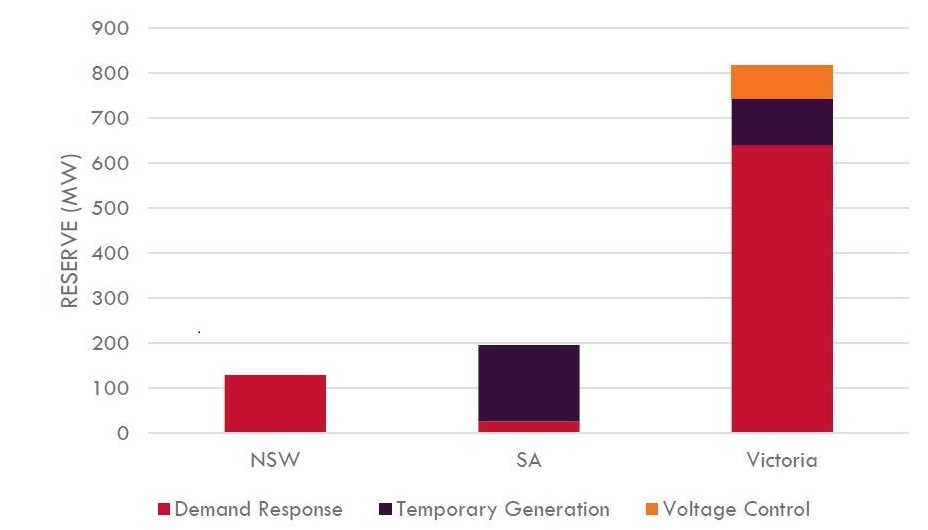 Whilst the RERT was contracted for the entire summer, it was actually activated (called into operation) in Victoria on 30 November 2017, and in Victoria and South Australia on 19 January 2018 when reserve levels were forecast to reduce to a point that would trigger a lack of reserve (LOR) 2 declaration. In addition, RERT was contracted for in New South Wales on 7 and 8 June but not used.

Since last summer AEMO has successfully proposed a rule change to increase the amount of time that it has to procure emergency reserves by reinstating the long-notice RERT. This means AEMO can call on a wider range of providers, but it also means it may pre-empt these providers from operating within the general market, which may have resolved the shortfall naturally.

AEMO is now seeking an enhancement to the RERT. The Australian Energy Market Commission (AEMC), which is to consider the rule changes, has issued a consultation paper[iii] seeking views on the proposed changes including:

Submissions closed on 26 July. A draft determination is expected in October and a final decision by the end of December[iv].

Getting the Balance Right

The rule change proposal has highlighted the challenge of getting the balance between reliability and affordability right.

While AEMO reported that the RERT had cost less than $6 per household[v], this referred only to the share of the $51m that was recovered from domestic customers, and the additional costs to medium and larger energy users were more significant[vi]. The Energy Users Association of Australia (EUAA) has said in some cases invoices sent to its members were for hundreds of thousands of dollars[vii].

Its submission to the AEMC, the EUAA was blunt:

“This submission begins with our member experiences from the 2017/18 RERT (it is not good).

“Our over riding concern is that the direction AEMO is taking seems to be driven by a desire to focus on system security and reliability, irrespective of the cost. This will lead to a gold plated network being complemented by gold plated reliability.”

Other submissions to the AEMC have also raised questions about the value of proposed rule changes with many questioning the rationale, the potential to distort market signals and raising the need for greater transparency[viii].

In its submission EnergyAustralia recognised that AEMO is facing increasing challenges in operating the power system and “that there can be increased risk of USE[ix] at times, but there is no evidence that customers are willing to pay for a tightening of the reliability standard”. It also noted that numerous customers have raised concerns over the cost and the transparency of the RERT process last summer.

St Vincent de Paul and SACOSS in a submission said: “We believe that consumers are extremely concerned about high prices and affordability and would not want the RERT to add additional unnecessary costs. This is particularly pertinent when reliability at the point of consumption may not be delivered. In consultation with our members, St Vincent de Paul and SACOSS are uncertain about the value delivered by the RERT.”

Another point to consider is whether a focus on the RERT is diverting attention from the more pressing issues facing the industry. In the following figure 2, the AEMC has broken up the actual energy lost by cause of customer interruption. The RERT can only address reliability matters, i.e. shortages of bulk supply. Yet this represents a very tiny amount of interrupted energy: 0.23 per cent. 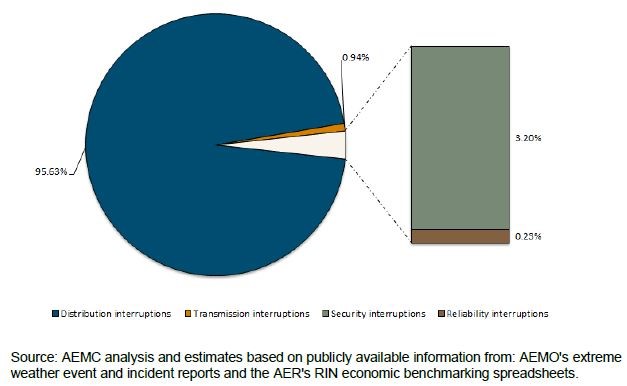 It is worth noting that “security” events (disturbances in the transmission network) cause more than ten times the customer inconvenience as reliability events. This cannot be addressed by having more generation or demand-side reserves, instead requiring action to provide a more robust (but not “gold-plated”) grid, through ancillary services markets and the like.

The Australia Energy Council’s greatest concerns around the RERT changes relate to longer-term contracting and proposals to engage RERT reserves on a different basis than the market’s Reliability Standard. These aspects potentially:

There is no doubt that the RERT is an important safety net that supports reliable electricity supply in the NEM, but as noted by the AEMC[xi] it does carry direct and indirect costs. The direct costs last summer were substantial. Indirect costs are due to the potential distortionary effects the RERT can have on market outcomes.

In invoking the RERT there needs to be a careful balancing of the price paid to have power available, against the cost of not having that availability.