Planning for summer: What have we learnt?

In May the Australian Energy Market Operator (AEMO) published its Summer 2017-18 Operations Review[i]. It provides a look-back over a much anticipated period, which included some unprecedented actions taken by AEMO and the South Australian government to restore confidence in bulk supply reliability during the peak period. We take a look at the report and its implications.

From late 2016 there has been intense public interest in supply reliability. This focus was understandable given a series of South Australian events, beginning with the disastrous system black on 28 September 2016, followed by several major network disruptions and some AEMO-instructed load shedding on 8 February 2017. There was also a “near miss” on 3 March 2017[ii]. As is often the case, public interest then focussed on the easiest thing to understand – bulk supply adequacy – despite that not being the root cause of any of these events.

Nevertheless the closures of Northern (2016) and then Hazelwood (2017) power stations did turn a previously oversupplied market into one much closer to supply-demand balance in Victoria and South Australia. Therefore, quite correctly, the market and AEMO vigilantly prepared for these states’ 2017-18 peak period.

Additional reserves emerged from the marketplace to help out, although their capacity did not entirely replace Hazelwood.

However given the previous oversupply and lack of demand growth, complete replacement of Hazelwood wasn’t needed. This was recognised in AEMO’s November 2016 Electricity Statement of Opportunities Update[iii] which forecast that if the above resources returned to service following the Hazelwood closure, the reliability standard would be met. 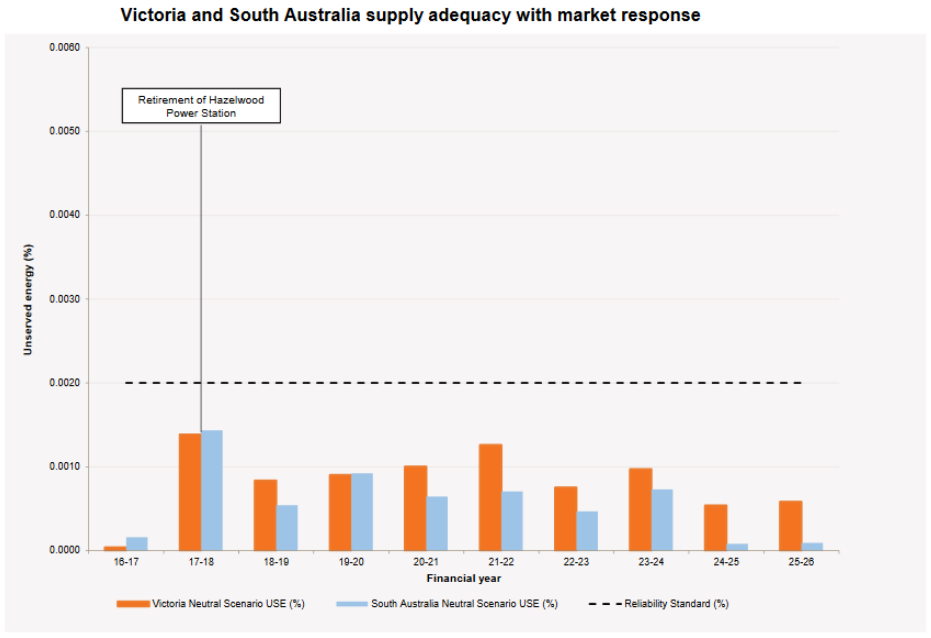 As we moved into 2017, while the data did not change greatly, the tone of AEMO’s documents became sharper, followed by some unprecedented actions to reinforce bulk supply.

Setting up for the summer

As is documented in the report, the industry undertook thorough planning ahead of the summer:

Prudent preparation in these areas does occur before every summer, however our members can attest the exceptionally high focus that was taken for 2017-18, professionally led by AEMO.

More controversially, AEMO further strengthened reliability by invoking the Reliability and Emergency Reserve Trader (RERT) ahead of the summer. This is a form of market intervention intended to be used when there is a forecast of not meeting the Reliability Standard (0.002% of energy unserved)[iv]. Based on the information released prior to the summer, it was not entirely clear that this was the case, but the very large volume of RERT subsequently engaged (Figure 3) ensured that the residual energy at risk became very small indeed.

The Bureau of Meteorology described the summer as the second warmest on record across Australia, and there were a number of severe heat events that drove electricity demand, although only Queensland set a new demand record. 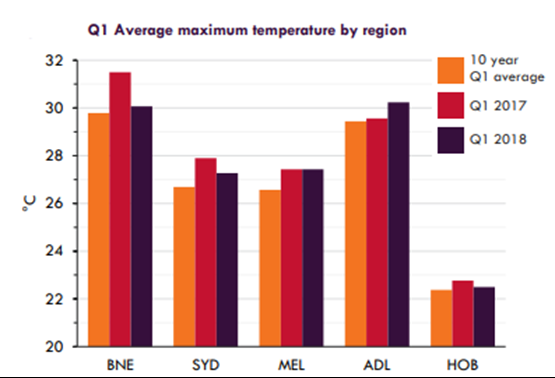 On 28 January Melbourne experienced a day of 38 degrees and high humidity, a combination of conditions that AEMO described as a one in 35 year event with respect to its effects on electricity demand. However as it happened on a Sunday, it did not set a Victorian demand record.

The report includes some metrics suggesting AEMO’s short-term demand forecast improved slightly on the previous summer. This analysis and initial results are very pleasing, and would benefit from a longer period of assessment.

Generators and transmission performed extremely well, with high levels of reliability for each.

“Some media coverage in the summer period highlighted potential reliability concerns with the coal fleet. While there were unplanned unit outages this summer (typical for thermal generators during warmer weather), the NEM coal fleet recorded its fourth-highest summer availability in the last 10 years, with around 250 MW more capacity available than the long-term average for this period.”[v]

A previous Energy Insider issue also dealt with this issue[vi].

Under the RERT, AEMO amassed a very large and complex portfolio of resources to be called upon in low reserve conditions, many from the demand-side. These options are paid outside of the market, usually an “availability” fee for having the resource on standby, plus activation and dispatch fees when called.

Many of the providers had inflexibilities: recall and minimum run times of several hours. As our members can well attest, when dispatching demand-side resources such inflexibilities are problematic, as, even a few hours ahead of time, it is very difficult to predict exactly when they are required. Instant responding resources are much more useful.

Having forecast low reserves, AEMO activated and dispatched some RERT contracts on 30 November 2017 and 19 January 2018. On both occasions, in hindsight, the activation proved unnecessary to avoid actual supply interruption.

AEMO further concedes that even if the one in 35 year conditions of 28 January had occurred on a weekday, RERT would still not have been needed to avert load shedding.

“The scenario determined that reserves (against this level of demand) would have fallen to 71 MW without the activation of RERT.”[viii]

Despite this, activations were however necessary due to the lead times of some of the resources. On 30 November and 19 January AEMO’s operators faced a difficult choice between conservatively calling longer recall resources hours ahead of high risk period or relying on a smaller volume of quick response resources should the risk eventuate.

The activation costs, mostly from 19 January, totalled some $25 million. Combined with availability payments, total RERT costs accrued to $51 million, recovered from Victorian and South Australian customers. The report describes this as “an annual average of less than $6.00 … per household bill”. As there are 3.4 million households across these two states, this calculation presumably relates only to that part of the RERT cost recovered from residential consumers, which comprise only about 40 per cent of electricity consumption. Media coverage of this figure did not recognise that the bulk of the $51 million is paid by Victorian and South Australian businesses.

There were no customer interruptions due to bulk supply shortages during 2017-18. Key to this was the market response to the closure of Hazelwood, combined with the good reliability performances of market generators and transmission companies, for which AEMO’s leadership was most valuable. While, in hindsight, the RERT was not necessary, it provided a considerable buffer had conditions deteriorated. Of course, this also came at considerable cost, and, like any intervention mechanism, creates distortions through splitting the market.

Just like deciding how many spare tyres to take on a trip, we need to make a difficult economic, and somewhat political, judgement about these matters.

There is often excessive stakeholder focus on bulk supply adequacy, when it actually contributes less than 1 per cent of all customer interruptions[ix]. Outages in the Victorian distribution network affected very large numbers of customers due to storms on 20 December 2017 and 18 March 2018 (see Figure 5 below) and due to heat on 28 January. The amount of energy interrupted by these common events was far greater than the amount ever at risk of bulk supply interruption. 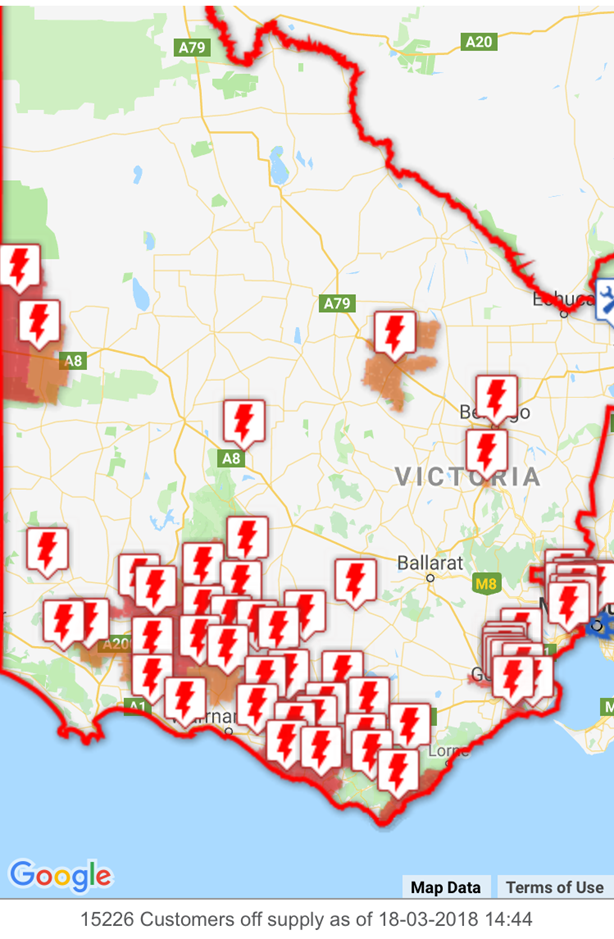 Additional spare tyres in bulk supply contribute negligibly to real customer experiences, but, as predicted in Parkinson’s “Bicycle Shed Effect”, we naturally focus on those problems that are easiest to deal with, rather than the most important.

While the Summer Operations report is valuable and largely contains all the factual information necessary, parts of it are presented with an advocacy tone. The executive summary concludes with a series of proposals that AEMO is keen to pursue, many of which are highly contested within the industry. AEMO has a valuable part to play in progressing market design, but this should be done outside operational functions such as event reporting. For example, on the same day AEMO published its Quarter Energy Dynamics – Q1 2018 Report which presented very insightful information in a measured and objective manner. Along with content, reporting style is key to maintaining industry confidence in our institutions.

[vi] AEC, Generator reliability and summer: The heat is on, February 2018