Generator reliability and summer: The heat is on

In a modern electricity grid, reliability is a priority.  An emerging challenge for Australia’s electricity system is how to maintain the reliability standard as the generation mix changes.  Recent reports[i]  frame reliability as a contest between the performance of intermittent renewable and conventional generators.  The recent focus amplifies the risk that conventional generators will “trip” or switch off, and attempts to cast them as less reliable than intermittent wind or solar.  This is a deeply flawed approach.

In reality the different features of these different types of generation pose different challenges for overall system reliability.  The real challenge is how to prevent the escalating reliability risk as we increase intermittent generation and reduce the volume of conventional generation.  We explain why.

The reliability risks of traditional generators differ from intermittent renewables.  These generators dispatch upon request.  But, like any complex machine, they can trip or fail.  Engineers use a “Forced Outage Rate” (FOR) measure to assess the reliability of individual generating plants, which, after some maths, can then be used to predict customer reliability. Consistent with overseas operations, Australian gas and coal plants typically have FORs below 3 per cent, meaning that more than 97 per cent of the time these plants will successfully operate when dispatched to run. Australian hydro is even better.

Power systems anticipate some breakdowns and operate with a reserve margin.  That is, surplus capacity which can be called upon to cover a reasonable number of forced outages.

Wind generators are, self-evidently, reliant on the current wind speed to produce electricity.  This means their output varies in a way that is not related to the level of demand.  The market can, and does, adjust around these changes in output, assisted by wind forecasts.  Unanticipated declines in generation from rapidly falling wind speeds require fast responding generation to replace the capacity.

Solar PV’s intermittency is different to wind: it has a highly predictable daytime characteristic and a more unpredictable cloud cover one. Again, the market can and does operate around this, assisted by cloud cover forecasting.

So the nature of these risks is different: conventional generators operate with relatively high reliability and predictability, but can trip suddenly without warning.  Wind turbines operate intermittently although their variations due to mechanical failures occur more gradually because such events are isolated to each relatively small turbine.  Solar is also intermittent and somewhat predictable, noting large solar plants can experience reductions similar to a large conventional unit trip when thick cloud moves quickly across them.

Australians have grown to love air-conditioners, even if they are only used a few days a year. And of course, we all use them at the same time. In South Australia, electricity demand on an extreme day doubles that of a mild summer’s day. This gives it one of the world’s peakiest demand shapes – a “needle-peak”. 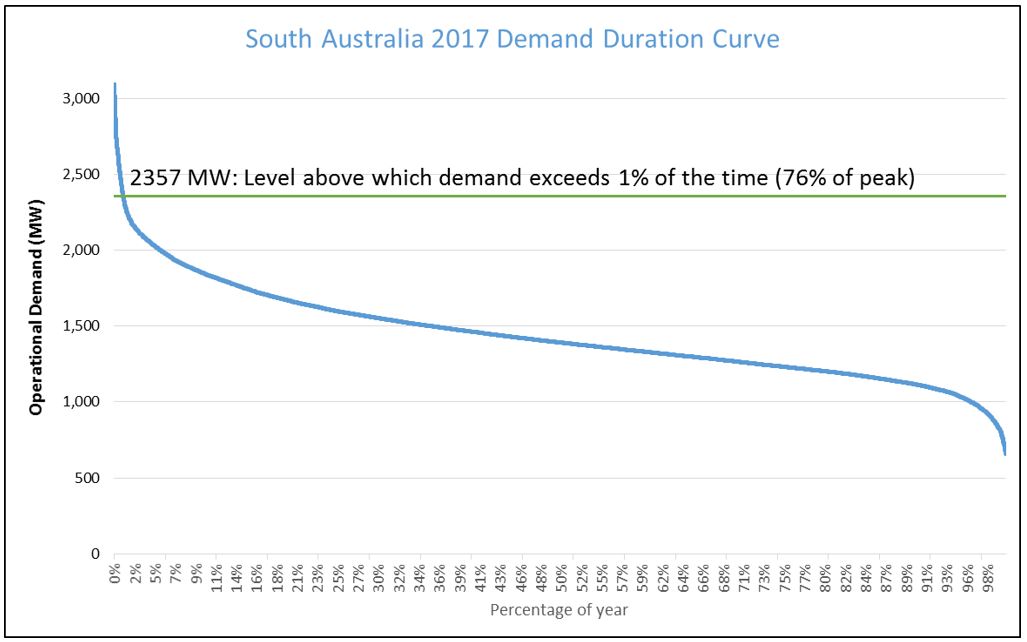 Western Australia, Victoria and New South Wales exhibit almost as much peakiness as South Australia, moderated slightly by their relatively larger industrial consumer base. Queensland and the Northern Territory’s more consistent summer climate means their demand is considerably less peaky, whilst Tasmania’s peak is in winter.

The next challenge is transporting electricity. Energy lost through resistance becomes heat, which needs to be removed. If not it will further increase the resistance and ultimately melt equipment. So in hot weather, just when it’s needed the most, network capacity is most limited, typically around two thirds of its winter capacity. The network must therefore be built with enough capacity to service the needle peak with only its hot weather ratings.

Unsurprisingly, it is challenging for the network planners to keep up, and power flows will sometimes exceed ratings in localised parts of the network. Blackouts caused by equipment protection in the low voltage distribution network is a frequent cause of hot weather interruptions.

Thermal generators that use steam turbines – all coal, some gas, and in future solar thermal – need to exhaust waste heat to turn the steam back to water. Australian generators use cooling towers or water bodies for this.  The hotter the air or water respectively, the harder the process is, and in some cases these generators may have to reduce production to keep the cooling process within safe limits.

For generators that rely on gas turbines, where air is compressed through a process similar to a jet engine, thin hot air also reduces their capacity and efficiency.

In response to these challenges and the incentives that the National Electricity Market places upon them to perform in hot weather, all existing thermal generators look for ways to address their hot weather capability. For example, it is now standard for Australian gas turbines to employ evaporative sprays to cool hot outside air before it enters the turbine.

Generators must also carefully consider operational risks: as equipment is being operated in unusually stressful ambient conditions, surprise failures can happen that might cause the entire unit to come offline. In the lead-up, plant managers focus on these potential areas of stress, knowing that this is the critical time to perform. Whilst there are always some outages, in recent heatwaves Australian thermal generation has performed well. For example, figure 2 shows a recent heatwave: whilst wind and demand were highly variable, as usual the capacity of the Victorian coal fleet remained stable. Some commentators drew attention to a brief outage of a Loy Yang B unit, however this event was unremarkable in the context of the entire fleet. 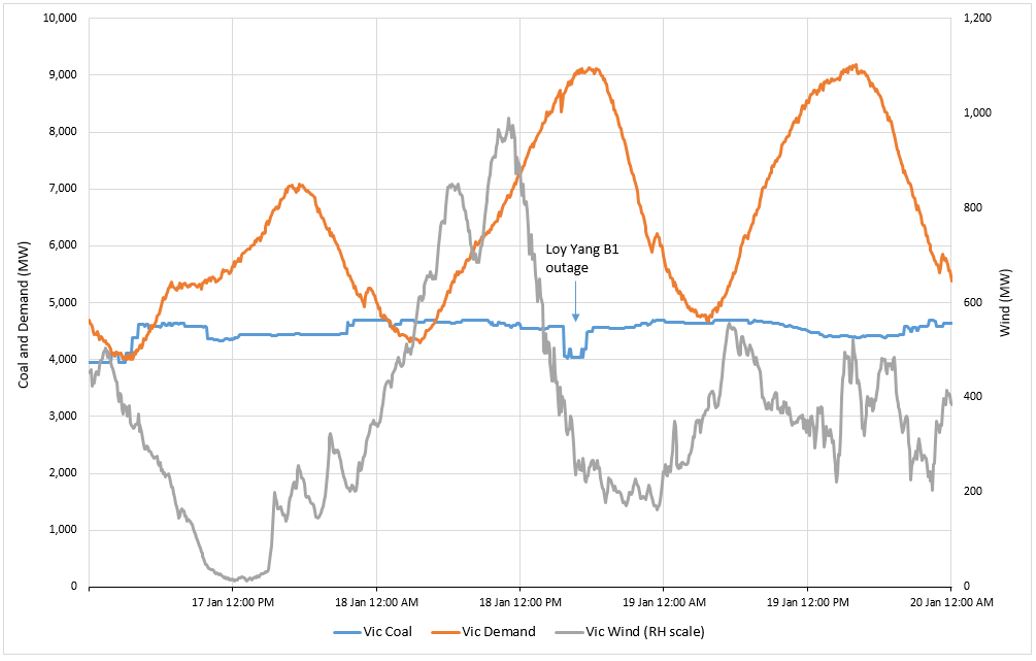 Hydro generation is the part of the industry least affected – at least directly – by sporadic high temperatures. Its remoteness however means in getting its electricity out to customers it may be exposed to the high temperature network constraints described above. And of course, in related seasonal conditions, it is exposed to drought.

Some of Australia’s first wind turbines, being designed for northern Europe, were designed to simply cut out in high temperatures in order to protect their internal wiring. This is believed to have now been largely resolved.

However the harder challenge for wind is well known – can the energy source be relied upon at the time of high demand?

Some high temperature events are caused by a hot desert wind, and wind contributes to meeting peak demand. However the worst heatwaves that run for days on end typically include calm daytime conditions, with breezes during the night. Figures 3 and 4 below highlight the challenge that can arise. 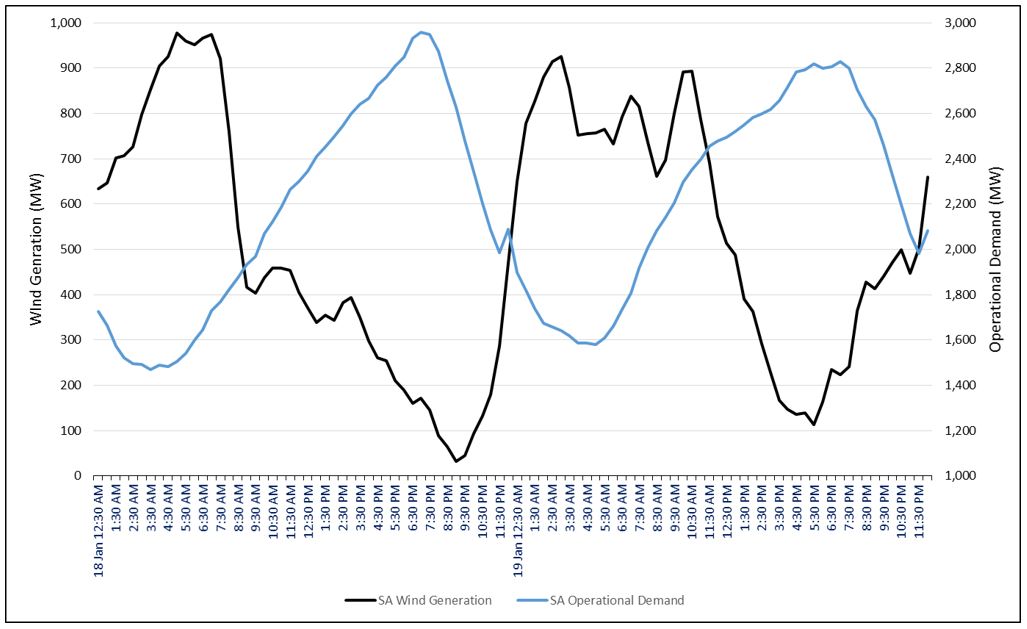 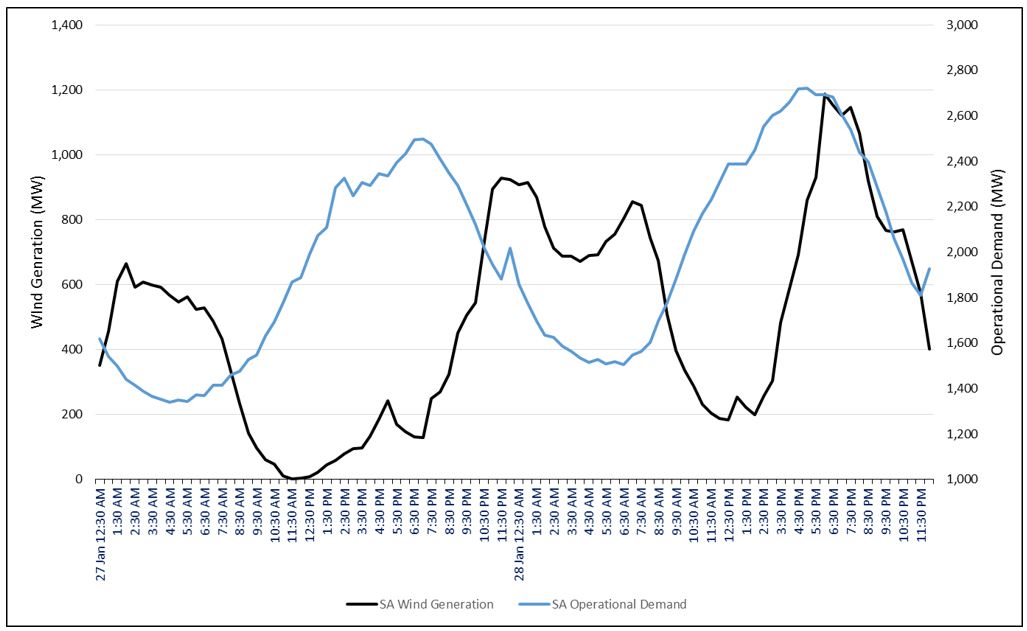 Based on historical observations such as these, the Australian Energy Market Operator can only confidently assume that 7-9 per cent of wind’s installed capacity is likely to be operating during peak summer demand.[ii]

Solar generation performance also drops off somewhat with hot weather at a rate of about 0.4 per cent with every degree Celsius[iii].

Whilst there is a correlation between sunlight and hot weather, the ability for solar to help out in peak demand is not as simple as one may hope. Australian hot weather demand historically peaked at around 3-4pm, after which demand declines slowly through the evening. Behind the meter solar has effectively clipped the daytime peak, such that the grid peak now occurs later, at around 6pm, when the sun is at a low angle. So solar has successfully reduced the absolute peak grid demand by about 8 per cent from what it would have been, but this beneficial effect is now saturated.  More solar (without storage) cannot further reduce the year’s peak. 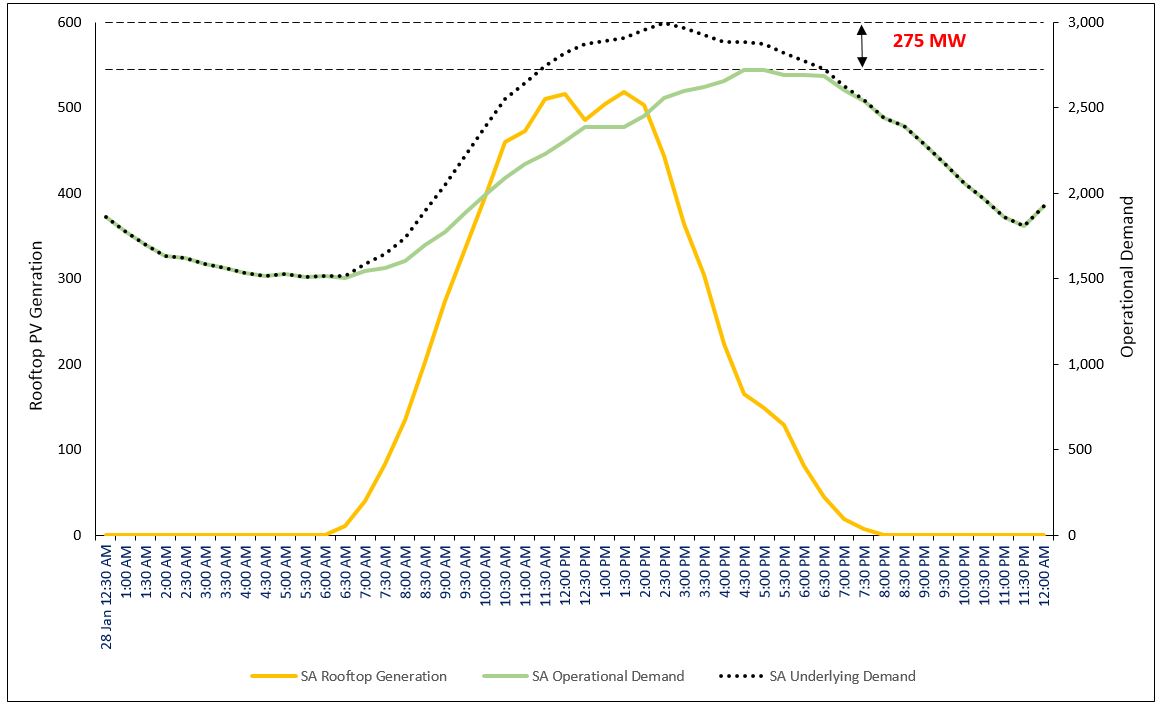 Like all complex machines, generator reliability is subject to a “bathtub curve”, where forced outages are initially frequent due to teething issues, fall rapidly and stay flat for many years until finally gradually increasing toward the end of the plant’s life. Engineers know that a well maintained “middle-aged” machine is in fact the most reliable one. Indeed the gradual decline in “old-age” reliability is not a technical necessity: at some point the maintenance and equipment replacement required to retain the best possible reliability becomes uneconomic.

Immature technologies face a double-whammy at the start of the bathtub: neither their technology nor machinery have the benefit of operating experience. Recall the enormous technical challenges Australian geothermal plants faced at the start of this decade, and the more recent challenges of the Crescent Dunes concentrated solar power plant in Nevada, which was off line for around eight months. (see SA’s “Courageous” CSP project).

This is not to say that we shouldn’t embrace and experiment with immature technologies – of course we must. But we shouldn’t assume that technologies such as solar thermal will begin their operation with the high level of reliability enjoyed by traditional plants.

Hot weather is the most challenging condition for any power system, from customer demand to networks to different forms of generation. Indeed it sets the conditions around which the power system is built, meaning much of the capital invested in it is just for these conditions. It is also the time that every part of the industry is most focussed on their own reliability.

Australian coal, gas and hydro generators, even when a few decades old, generally perform reliably, comparably with those overseas. This can only be fairly observed with availability statistics measured carefully and over the long-term. Generator units will break down from time to time, and power systems expect this and are designed to accommodate a reasonable expectation of them.

Our electricity supply is not a contest between renewables and traditional generation, which are now co-dependent. The real challenge is how we best balance the generation mix to deliver reliable, lower emissions power supply and least cost. This summer has reminded us of the urgency to agree the right policy settings to achieve that.