Among the many dramatic events in recent NEM times is AEMO’s activation of the Reliability and Emergency Reserve Trader (RERT) for the summer 2017/18. This is only the fourth time in 20 years that it has been used, and the size and cost of this year’s effort dwarfs the previous three put together. As the summer draws to a close we look at what triggered it, whether it proved good value and what lessons can be learned.

The market is designed to provide investment incentives to ensure sufficient capacity in generation, or demand-side activities.  This capacity should allow bulk supply and demand to be matched nearly all the time. Since it’s impossible to build a power system that is perfectly reliable, an economically derived reliability standard has been set, which targets serving at least 99.998 per cent of demand. Key settings, such as the price cap and the cumulative price threshold, are set such that the market would naturally achieve at least this level, and it has historically performed very well against it.

When the NEM started in 1998, as there was doubt that a market could achieve this level of reliability on its own, the RERT (then called “Reserve Trader”) provided a safety net. If the market operator forecast that the approaching peak load period was likely to serve less than 99.998 per cent, it could tender for additional reserves, such as demand-side response (DSR) and small generators, that, for whatever reason, were not planning to participate in the market. The costs of these additional reserves are recovered through a socialised levy on customers in the affected region(s). The reserves were then withheld from the market, and dispatched as a last resort by AEMO when they would otherwise need to interrupt customers involuntarily.

To clarify, we are referring here only to bulk reliability, i.e. whether there is adequate bulk supply to meet bulk demand across a region. It is more common for security events (disturbances in the transmission network) to blackout customers on a large scale: e.g. the September 2016 South Australian System Black and the January 2007 Victoria-NSW separation. Security events are unrelated to supply adequacy. And, dwarfing all blackout causes by far are localised issues in the distribution network. The AEMC recently provided the following useful break-up of the different causes of customer interruption. The RERT targets the 0.24 per cent brown slice. 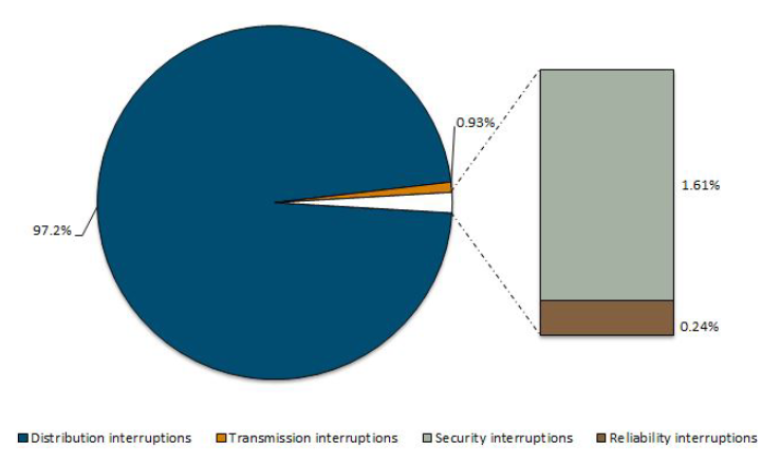 The Reserve Trader was intended as a transitional mechanism only, and was slated to terminate in 2000. Despite consistently good outcomes, pessimism about the NEM’s future reliability has been a consistent theme since then, such that the mechanism was extended an incredible seven times, until finally being made permanent in 2016[ii].

Whether or not it was truly necessary, the RERT was a cheap way to buy peace of mind. AEMO’s predecessor, NEMMCO, triggered it only twice, for a total cost of about $5 million[iii]. AEMO triggered it for three days in 2014, but as it turned out this event actually cost zero.

Following a rash of coal-fired power station closures there was understandable interest during 2017 in the reliability outlook for the current summer in Victoria and South Australia. AEMO’s Electricity Statement of Opportunities[iv] predicted these regions would be very close to, or possibly just outside, the reliability standard if adverse conditions are assumed. Whilst quite a turnaround from the large oversupply present for most of the current decade, predictions of similar small excursions from the standard were common during the period of rapid demand growth of last decade.

Figure 2: September 2017 Forecast of Unserved Energy in this and coming summers, Victorian region 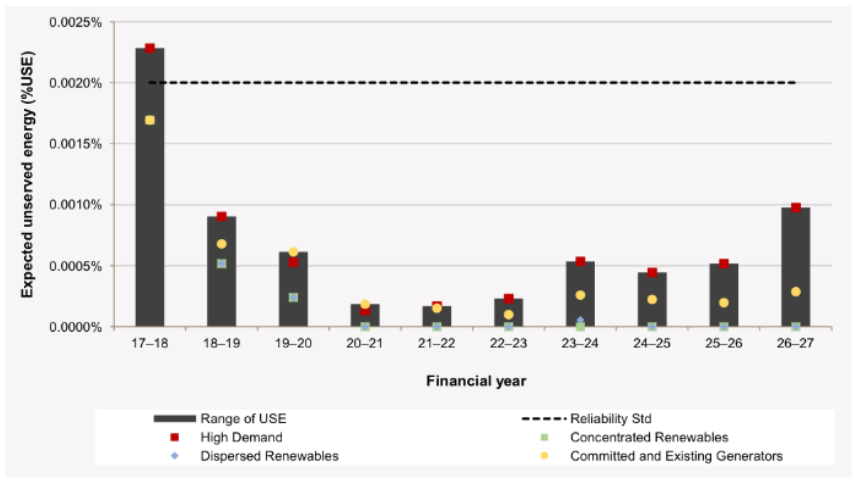 AEMO has some freedom to determine whether the outlook warrants the use of the RERT and how much to recruit.  Full details of the 2017/18 RERT are not yet public, however AEMO has stated that it now has over 1,000MW of RERT reserves available to it across Victoria and South Australia, which is more than double the largest previous use.[v] Given the marginal excursion forecast, this seems a remarkably large volume.

In the lead-up to the summer, AEMO forecast its summer preparatory activities to cost some $68million[vi].  The cost break up is not public, but the majority of this is likely to be RERT costs. For the summer period up to the end of January, a total of $27 million[vii] is being recovered from Victorian and South Australian customers, and further costs will accrue till the end of March. The full costs will ultimately be revealed in a report AEMO is obliged to publish by mid-2018.

AEMO is limited to recruiting for the RERT reserves which did not intend to participate in the market, and are therefore additional. In practice it is impossible to be sure. Energy Council members anecdotally report being outbid by AEMO in their springtime DSR recruitment drives.

RERT is dominated by DSR, for example factories that adjust production runs in order to reduce electrical load at the peak period. Whilst conceptually attractive, DSR is notoriously complex to arrange, operate and verify. Responders usually require an availability fee to set up their arrangements plus fees for dispatch events. The dispatch fee is typically high, which seems acceptable since they are intended to be used infrequently. However they typically also require several hours’ notice period, and often have minimum run times of several hours. These inflexibilities create great difficulties in efficiently scheduling them as the operator must anticipate the peak ahead of time and will face considerable costs if called incorrectly.

AEMO has dispatched RERT providers twice this summer, on 30 November and 19 January. These are the first time in NEM history that RERT capacity has been actually dispatched. On each of these days AEMO anticipated a high demand peak and dispatched several providers with long notice periods and minimum run times. On each day the demand subsequently fell below AEMO’s forecast, and, in hindsight, the dispatch proved unnecessary.

On 19 January, this activation cost was some $24 million, almost entirely recovered from Victorian customers[viii]. This was for six hours of provision during which a total of 390MWh was dispatched: an average cost of $62,000 per MWh, roughly twice the average economic cost of involuntary customer interruption without notice[ix] – and over four times the Market Price Cap.

How demand-side is best operated

Putting the managerial challenges aside, on paper at least, DSR is an extremely cost-effective source of reserve, with availability fees typically a fraction of the cost of building a generator. Energy Council members have great collective experience in the area, and the DSR dispatching challenges AEMO has faced this year are quite familiar to them.

Whilst market-facing retailers also make scheduling mistakes, they are at least putting their own money at risk, and have developed over many years the skills to optimally contract and schedule it. If they over-dispatch DSR, they will face unnecessary costs, and if they under-dispatch, they will be exposed to paying the market price cap of $14,200/MWh.

In contrast, a market-operator’s incentives are skewed towards risk aversion. This may result in recruiting and dispatching reserves well beyond the true benefit to customers.

The future of the RERT

The Finkel review recommended expansion of RERT into a “Strategic Reserve”, where such reserves are either kept in place permanently or far more frequently recruited, even when the reliability standard is forecast to be met. The experience of this summer shows this would be a far from costless exercise.

In its Reliability Frameworks Review Interim Report[x], the AEMC urged caution and further analysis on the concept. This seems most prudent. Indeed, even if the RERT remains unchanged, there may need to be additional checks and balances to guard against over-use and the consequential costs to consumers.

[ii] AEMC, Extension of the Reliability and Emergency Reserve Trader

[vi] AFR, Companies Drafted by AEMO operator to help keep the lights on this summer, 21 Dec 2017