Renewables: Once again in the spotlight

Never too far from the news, the prospects for the renewables sector has been in the spotlight again over the past couple of weeks. This was fuelled by the release of new data showing the installation of record new capacity in 2019, the ongoing curtailment of some renewable output, a market rule determination, as well as the Victorian Government’s justification for its push to go-it-alone on transmission developments.

We take a closer look below at the latest developments and some of the challenges.

The Clean Energya Regulator’s (CER) latest assessment pointed to record annual growth in renewable capacity with 6.3GW of new capacity installed in 2019, up 24 per cent from the previous record set in the prior year (also covered here in our latest Solar Report). Notably household and commercial rooftop solar grew 40 per cent from 1.7GW in 2018 to 2.4GW in 2019. And it continues to grow as industries and business turn to renewables and a growing trend of batteries being installed along with solar PV and bigger system sizes. Meanwhile utility scale solar increased by 18 per cent with 3.9GW delivered.  A similar capacity is expected to be delivered this year (6-6.5GW)[i].

Despite these positive numbers, the regulator, along with Bloomberg New Energy Finance, have pointed to some looming challenges. While 2GW of utility-scale renewable capacity reached financial close in 2019, this was less than half the record 4.4GW closed in 2018. While the CER sees the latest result as a strong one, in the context of the investment boom in renewables seen in 2017 and 2018, that influx of new capacity led to weaker build signals from wholesale prices and large-scale generation certificate (LGC) prices falling materially as the increased supply came online[ii].

Despite the hurdles, the CER is optimistic, with some utility-scale developers finding workarounds to grid constraints and declining marginal loss factors (MLF) with some project proponents still finding relatively strong parts of the grid in which to build, while some are adding batteries and there is growth seen in off-grid renewables systems on resources projects, as well as 5-30MW solar PV close to large loads.

It also points to the potential for a second wave of renewables investment if the necessary grid work can be economically justified and progressed quickly, and changes are made at a distribution level to enable high levels of annual rooftop solar capacity additions.

The regulator’s assessment does flag the challenges faced in the West Murray zone in north western Victoria and south western New South Wales with grid connections.

The area of the Victorian and New South Wales power system bounded by Ballarat, Dederang, and Darlington Point, referred to as the West Murray zone has attracted significant investment in grid-scale solar and wind generation, despite being a “remote and electrically weak” part of the National Electricity Market (NEM)[iii].

In September 2019 issues with system strength saw five solar farms[iv] have their output curtailed and the Australian Energy Market Operator (AEMO) has tendered for system strength services in the area.

The currently identified thermal limit for the West Murray region is around 1.7GW, while installed and commissioned generation as at February 2020 is at 1.7GW with around 1.2GW committed and another 3GW of capacity in the application phase[v].

AEMO has outlined plans to address the issue including working closely with the solar generators, equipment suppliers and Network Service Providers (Powercor and TransGrid) to test and develop solutions that would restore secure operation requirements.

Despite these measures the Victorian Government has now stepped in and nominated to go-it-alone on transmission planning, an approach that will raises significant issues for grid planning nationally (see in this earlier EnergyInsider Victoria’s audacious intervention: The end for national planning?).

The big influx of renewables over the past two years has seen some solar and wind generators flocking to areas that were previously small rural load centres connected to the regional reference node. Broken Hill, for example, (and as noted detailed in this earlier article Marginal Loss Factors: Will someone please repeal the laws of physics?) is connected to Buronga by a 300km line.

The rapid connection of neighbouring competitors can impact the loss factors for some incumbent plants, which is the risk that all generators face and new generation developers need to build to consider in an open-access network regime like the NEM’s. 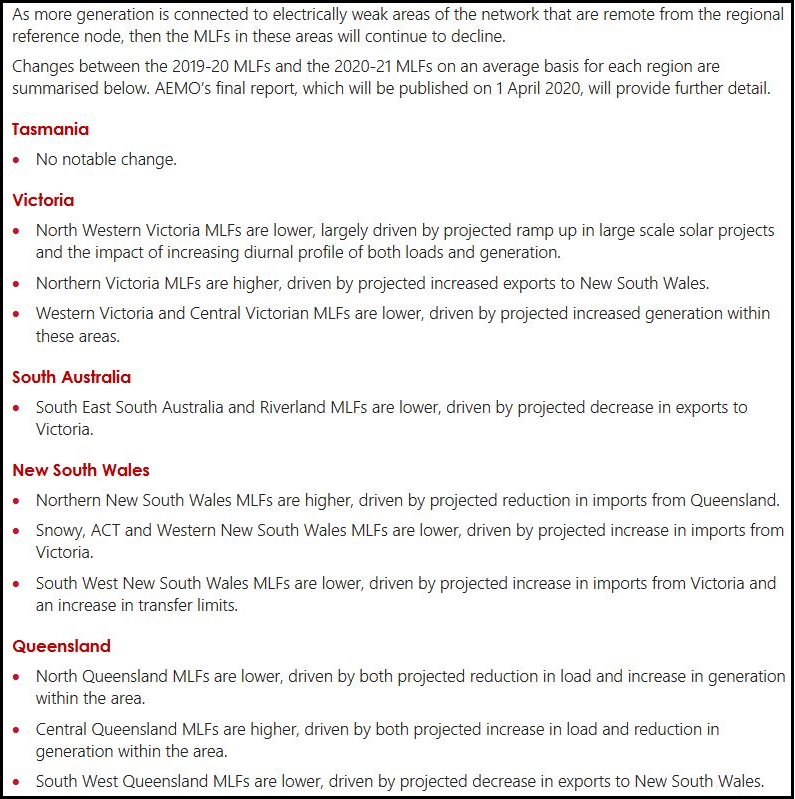 Some proponents have been concerned about volatility in transmission loss factors because of its impact on project revenues and argue that these have been difficult to forecast[vi].

A rule change was sought by Adani Renewables to average MLFs on the basis that the MLF was no longer fit for purpose.  In a rule determination last week the Australian Energy Market Commission (AEMC) rejected the request stating:

“The final rule will keep the existing marginal loss factor methodology framework so important signals are retained as to the best place to build, and consumers are not shouldered with any additional cost or risk.”

Previously, the AEMC has said that it recognised the importance of maintaining clear signals for efficient dispatch and future investment in the market: “Consumers should not be expected to shoulder such uncertainties when they have no ability to manage or offset them.”

The AEMC’s final determination on marginal loss factors reflected the cost of MLFs to the system. The proposal to average MLFs would have shifted some generators’ costs to consumers. It would also have dulled an important signal to generators to locate where grid losses are lower.

Generators have invested under the existing signals for 21 years and changing them now would have disadvantaged generators who had carefully considered losses when selecting their location.

The market operator is currently introducing better ways to forecast MLFs, which should avoid the surprises that motivated the Adani rule change. The changes are expected to improve transparency and predictability of marginal loss factors. According to the AEMC the changes should enable better informed decision-making by prospective investors, developers and owners of generators.

AEMO’s latest Quarterly Energy Dynamics report shows the curtailment of Australia’s solar and wind generation in the NEM reached a record in the final quarter of 2019.

Wind and solar generation curtailment increased to 6 per cent of total renewable energy output. The main reason is the high system security constraint on five solar in the West Murray.

Network constraints remain a relatively large factor with AEMO estimating an average of 55 MW in the fourth quarter of 2019. The main factor in Q4 2019 however was the solar constraint in New South Wales and Victoria, which increased from 14 MW to 75 MW with the output cut for the entire quarter, compared to less than one month in the third quarter of 2019.

Solar output is increasingly supplying the grid during the middle of the day which has helped with the increasing incidence of negative spot prices. The introduction of more small-scale solar PV and more large scale renewables is expected to fuel this trend[vii].

AEMO notes that in the fourth quarter of last year self-curtailment from renewable energy generation was largest on days with extended negative spot prices. A record 938MW of South Australian renewable output was curtailed on 11 November last year, linked to low demand, transmission outages and a spot price of -$343.33/MWh.

Wind and solar farms will self-curtail output to avoid paying to generate.

This latest data and ongoing assessments continue to illustrate the challenges of a grid and power system in transition.