A record 32 per cent of electricity generated came from renewable sources in the third quarter while on 24 September the Australian Energy Market Operator (AEMO) reported instantaneous renewable generation of 61.4 per cent in the grid – the highest level recorded. The CER expects across the calendar year the contribution of renewable generation will be around 30 per cent, double the 15 per cent reported just four years ago. The increase in the contribution from renewable sources (capacity has grown by an average of 6GW each year between 2018 and 2020) has led to the emissions intensity of electricity supply in the NEM and SWIS falling from 0.79t CO2 in 2017 to 0.66t CO2 to end Q3 2021. 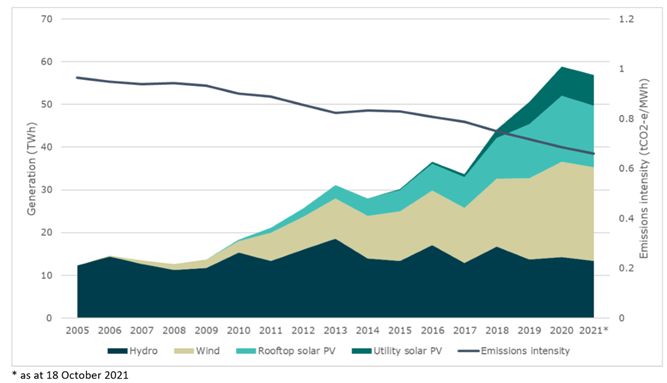 During the third quarter 603MW of new large-scale renewable energy capacity was approved taking the year’s total to date to 1.2GW, which while it is down on 2.7GW approved in the same period in 2020, this is partly because of the timing of accreditation for several power stations which were expected to come online early this year, but actually began generation in late 2020. Over the first nine months 184 power stations have been approved. There is expected to be 2GW accredited this year with more than 1.4GW under application in the last quarter. 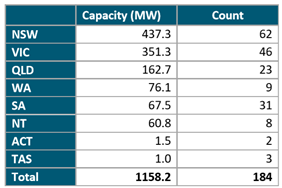 Investment is trending up for large-scale renewables with final investment decisions for 1.1GW in the third quarter and taking the total in 2021 to the end of September quarter to 1.9GW. This compares to only 44MW in the first quarter and 725MW in the second quarter.

A similar result to the Q3 outcome is expected by the CER in the final quarter and if achieved it would see FID capacity exceeding the 2.7GW reported in 2020.

The siting of committed and probable renewable projects across Australia is shown in figure 3. 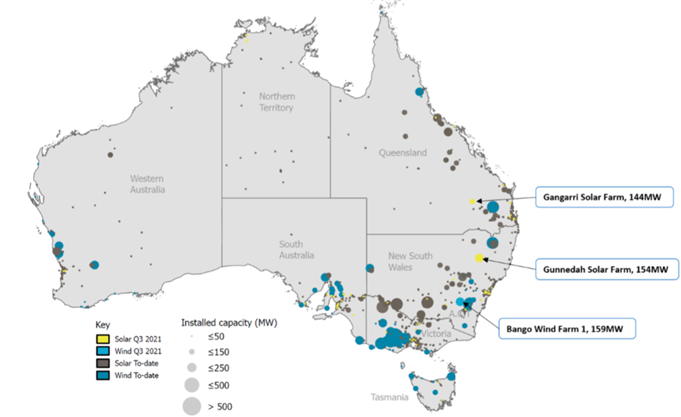 Wind farms were the main source of renewable generation in the quarter, but utility-scale solar had the biggest year-on-year growth – up 34 per cent from Q3 2020. The overall mix has stayed fairly stable with each of the large-scale sources contributing a similar proportion of generation between 2020 and 2021 (see figure below). 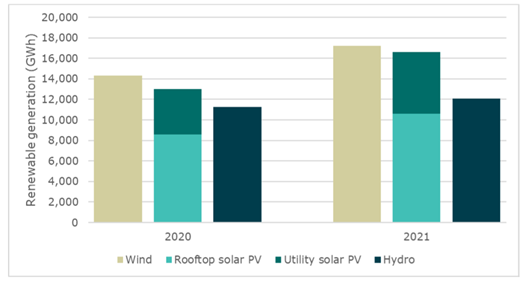 Wind generation accounted for 37 per cent of renewable generation and the CER believes that offshore wind represents significant potential to increase the scale of wind generation in Australia.

Large-scale certificate (LGC) spot prices increased significantly in the September quarter reaching $40.40, which is the highest price since January this year and according to the CER this matches the historical pattern as retailers secure supply ahead of the surrender date of 14 February 2022.

The CER expects LGC supply and demand to stay tight to at least 2023 as voluntary cancellation continues to increase and 17 million certificates are needed to claim $1 billion in shortfall charges from previous years.

Supply is expected to be at the top end of the regulators range forecast of 37-40 million. LGC supply in the third quarter was 9.2 million taking the total to the end of September to 26.4 per cent, a 22 per cent increase from the corresponding period in 2020. Further growth is expected in the Q4 which is typically the peak period and there could be increased LGC created from hydro generation based on the expectation of a wetter than average November to January period.

This year new large-scale generation capacity is expected to be beaten by the installation of 3.2GW of rooftop solar capacity, which would be a new record. The third quarter result for rooftop PV exceeded expectations with 755MW installed and the period also saw an increase in the average system size reported (8.42kW). While the installed capacity was the lowest quarterly result for this year it was achieved despite restrictions and limitations on installation work as a result of COVID-19 lockdowns in New South Wales, Victoria and the ACT.

Strong growth earlier in the year has meant installed capacity has increased by 2.3GW in the year to date, a 14 per cent increase over the same period last year and if the seasonal pattern for the last quarter follows that of previous years it would reach the forecast 3.2GW record for the full year. There is now a total capacity of 15.6GW of rooftop solar and with the increased capacity there has been record generation from rooftop solar.