back to analysis
by Mitchell Cutting
TAGS

District energy systems are small, localised networks that can utilise waste heat, excess energy from local generation or be connected to the grid to provide heating or cooling. The fundamental idea of district heating is “to use local fuel or heat that would otherwise be wasted, by using a distribution network of pipes as a local marketplace.” [1] It is limited to some rare, niche locations in Australia, but is quite dominant in some countries – particularly those with cold climates and high population density.

Practically, district energy involves a set of pipes being run from a central heating or cooling source underground into homes and businesses. Hot or cold water is deployed into the network to provide heating or cooling, and then returns to be heated or cooled again and again.

District heating has been designed around efficiently capturing waste heat from thermal power stations. But what about when those power stations close in favour of renewable energy – is the district heating system stranded? Developments are emerging overseas that could give these systems a life in even a fully renewable power system. We take a look.

Additional energy that would have otherwise been needed to provide heating is no longer required, decreasing the emissions generated overall while also driving efficiency.

Historically, district heating systems have operated with pressurised water being pumped out at temperatures above 80 degrees Celsius. Older systems can lose up to 30 per cent or more of their heat before reaching customers premises. Technological improvements over time are leading to the production of more efficient systems, and existing systems are being upgraded. Improvements include better piping insulation and the integration of digitised solutions help to reduce energy loss and allow systems to run at lower temperatures, reducing energy consumption.

District cooling involves pumping cool water through distribution pipes to homes and businesses on the network and back to the central cooling plant. After cooling the buildings, the water generally returns with a temperature difference of approximately 10 degrees Celsius higher.

Figure 1: Market shares for heat supply to residential and service sector buildings in Sweden between 1960 and 2014 with respect to heat delivered from various heat sources. 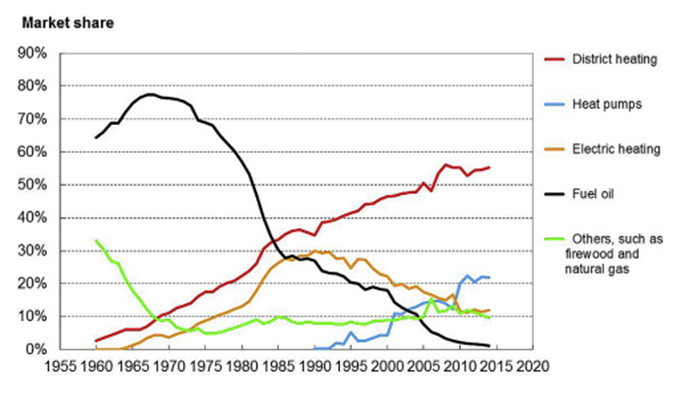 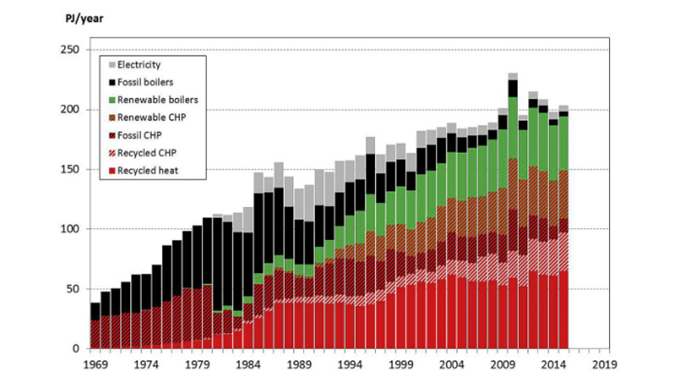 Following the ban on ozone-depleting chlorofluorocarbons (CFC) as a refrigerant in 1992, Sweden implemented its first district cooling system in Vasteras. As of 2014, more than 40 systems existed in urban areas across Sweden. These draw on natural cold resources (through heat exchanges), absorption chillers, mechanical chillers, (with or without heat recovery) and cold storages.

In the late 2000s housing construction in Western Sydney was booming, and property developers started to look for quicker alternatives to connecting to the network to supply electricity and to heat or cool homes.  If a gas connection was readily available, developers could install a localised tri-generation system, also known as combined cooling, heating and power.

GridX’s system used on site natural gas-powered generators to supply electricity to the residential development. It also captured generation by-products – excess heat, steam or other gases that would be lost – and deployed them into a local district energy system to heat and cool 16 homes.

The sand battery is designed to draw on excess renewable energy, say on windy days. It also receives waste heat from a data centre it is located next to. The system is able to keep the sand between 500 and 600 degrees Celsius for months. When energy prices increase, the sand battery is called on to heat water, which is then used in the local district heating system. 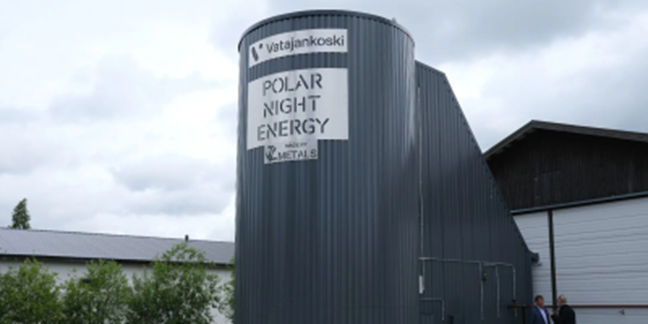 A similar project, but using water, is under construction in Berlin, Germany.  The 200MWh capacity thermal energy storage facility can hold 56 million litres of water. The water will be heated to 98 degrees Celsius when there is excess capacity from wind generation or from waste heat generated in the city. When energy prices are high, the water will be fed into the city’s district heating network and as with the project in Finland, enabling energy that would have otherwise gone to waste to be utilised. 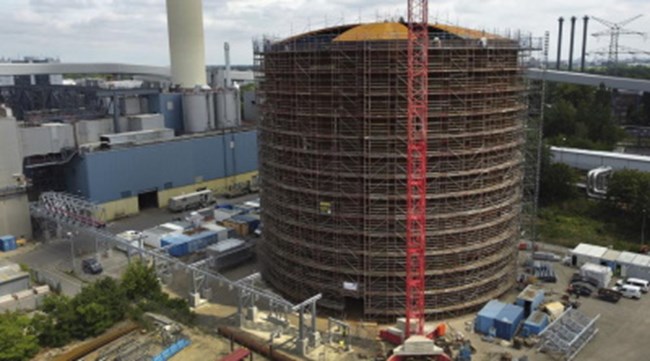 The thermal tank under construction in Berlin, Germany

Though not widely deployed in Australia, district energy systems are viable in the right settings and can provide low cost and lower emission heating and cooling solutions for large numbers of people. Internationally they continue to be utilised and new technologies and approaches are emerging to support them.

The extent of the current energy challenges in Europe stemming from Russia’s invasion of Ukraine has been starkly highlighted by measures being undertaken in Germany. To reduce its reliability on Russian gas Germany is readying around 10,000MW of non-gas generation reserve capacity, including coal plants that were slated for closure. We take a look at the measures and the potential impact of diverging from its coal phase-out strategy.

Jul 07 2022
Read Analysis
GET IN TOUCH
Do you have a question or comment for AEC?