Reference bills and default offers: What are the pros and cons

Promoting the benefits of retail energy competition is a challenging task in the current political environment. Governments are determined to be seen as tough on energy retailers to deliver immediate price reductions. On the other hand, the benefits of competition are largely unseen, with long-term outcomes unable to be directly attributed to a specific action.

But the competitive retail electricity market does need to evolve to ensure that consumers are better able to fully realise the benefits in the long term. The way retailers have developed their offers is confusing, and is decreasing the efficiency gains and reductions in bills that competitive markets should deliver. So the question is how best to address this situation.

The Australian Competition and Consumer Commission’s (ACCC) Retail Electricity Pricing Inquiry (REPI) proposed two key interventions to reshape the competitive retail electricity market. The first would introduce a default market offer (DMO) to cap the price paid by customers on the standing offer. The second is to use the DMO to set a reference bill in each network patch, from which retailers would be required to base their advertised discounts off. These two interventions would deliver very different outcomes for energy consumers.

To get a better sense of what these interventions might deliver, the Australian Energy Council commissioned Oakley Greenwood to investigate the impact of price regulation on the competitive market, and to compare this to the possible outcomes of lighter touch interventions, such as implementing a reference bill to simplify comparison of retailer offers.

The resulting report, Advantages of a Reference Price as compared to a Default Tariff, due for released tomorrow sets out three different methods of price regulation available to policy makers – ranging from a basic service offer to the ACCC's default tariff. Oakley Greenwood found that while the magnitude of the impact differs slightly, all three have the same ultimate risk. Put simply, smaller retailers, often at the forefront of price and innovation, are less able to ‘ride out’ a poor regulatory decision in the short term and may exit the market. With their exit, the larger retailers are under less pressure to deliver product innovation and sharp pricing, with a detrimental impact on customers as a whole.

This is shown in the below table. A DMO would reduce the number of customers on ‘bad’ offers in the market, but the negative impacts of lower competition will mean the ‘really good’ offers are also lost. This would result in customers drifting towards the centre, minimising price dispersion. While this might sound positive, what it means in practice is that the customers who are disengaged benefit slightly, at the expense of those who have engaged in the market, which tends to be the vast majority of customers in the National Electricity Market (NEM)[i]. 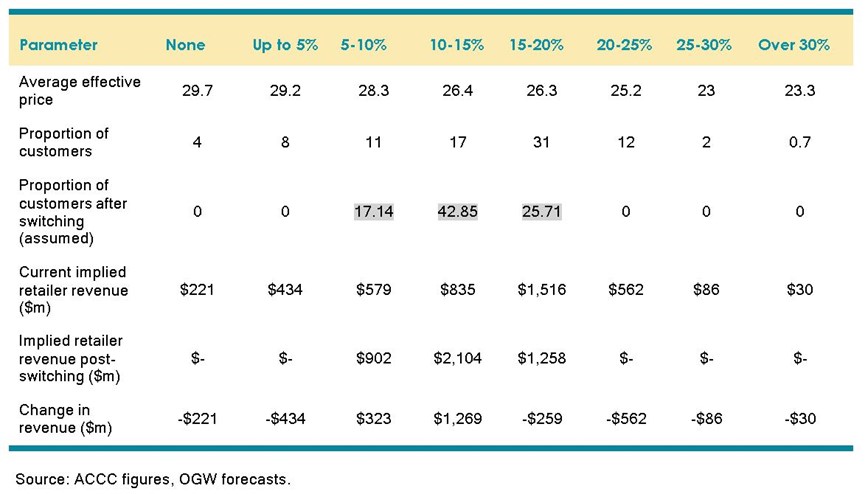 On the other hand, a reference price aims to make it easier to switch to better offer, incentivising customers to engage in the market. There are two groups of customers at greatest risk from a DMO. Customers who have engaged and found a really good deal will be worse off, paying more due to the effects of decreased competition. The other group most at risk are the slow movers, the customers on standing offers today who would have switched to a competitive market in the coming few years. Through incentivising these customers to engage in the market, they are able to achieve significant savings, however it is unclear how these customers will react if they are automatically put on a slightly cheaper DMO.

Oakley Greenwood highlights this in the table below by highlighting the benefits available to the existing standing offer customer segment under a BAU scenario where customers move from a standing offer (SO) to a market offer (MO).

Table 3: Reproduction of the ACCC’s modelled benefits from introducing a default market offer

As shown, even without the reference price making it easier for customers to engage, the benefits to the standing offer customer segment are higher under the ‘do nothing’ scenario Table 2 than the DMO scenario.

What this analysis shows is that retailers and governments need to be proactive in encouraging all customers to engage in the market. With this engagement, particularly for those on higher priced offers, the savings are significant and can be achieved immediately. Letting customers believe that price regulation will ultimately benefit them is not in their long term interests because they are less likely to take advantage of cheaper market offers.

Retailers are keen to do their bit and are working on implementing a voluntary comparison rate to make switching easier in early 2019. The comparison rate is aimed at simplifying discounts, making it easy for customers to work out if they are paying more than they need to and choose a cheaper deal. The AER is also updating the EnergyMadeEasy website to make it easier to use, and governments and other stakeholders should commit to education and advertising to encourage customers to use the site to sign up to a cheaper deal that saves them money today. It is important to not risk the long term benefits from competition that consumers deserve.

[i] According to figures presented by the ACCC, as at June 2017, those on standing offers made up no more than 22 per cent of all customers in the NEM.

[ii] SEQ and NSW are the most immature competitive markets in the NEM.

Nov 05 2020
Read Analysis
GET IN TOUCH
Do you have a question or comment for AEC?