Putting some momentum in inertia

The Australian Energy Council is pleased to publish a new report by MarketWise Solutions on the introduction of an Inertia Market into the National Electricity Market (NEM).

The industry has been aware for some time of the need for a mechanism to recruit inertia to support the NEM as it transitions. It is sometimes described as a “missing market”. This was also recognised by the Energy Security Board (ESB) that included it as one of the necessary future developments in Essential System Services (ESS).

However ESS efforts are presently focussed on other important and technically challenging areas, such as primary frequency control, system strength and unit commitments for security.

The AEC has a members’ working group dedicated to frequency control matters which contemplated how this missing market could be filled. Members presented some interesting ideas, and the group engaged MarketWise to draw that thinking into a clear proposal.

MarketWise considered four approaches and concluded in favour of a spot market mechanism for recruiting inertia, as is done for energy and Frequency Control Ancillary Services (FCAS). A design is proposed that is conceptually similar to, and integrates with, these existing spot markets.

What is power system inertia?

When the energy going into and out of a power system are unbalanced, the mismatch is initially absorbed in the kinetic energy of the rotating machines that are synchronised to the system frequency, such that the frequency moves away from 50.00Hz. FCAS then detects this and drives it back to 50.00Hz.

Inertia refers to the power system’s natural resistance to a move in the frequency. A “heavy” power system will move slowly away from 50.00Hz, and a “light” one will move quickly: the “Rate of Change of Frequency” (RoCoF). A heavy system has a low RoCoF to a given disturbance, which provides time for the FCAS’ to work. At the extreme, a very light system could quickly collapse when subject to the sorts of disturbances that power systems face from time to time. 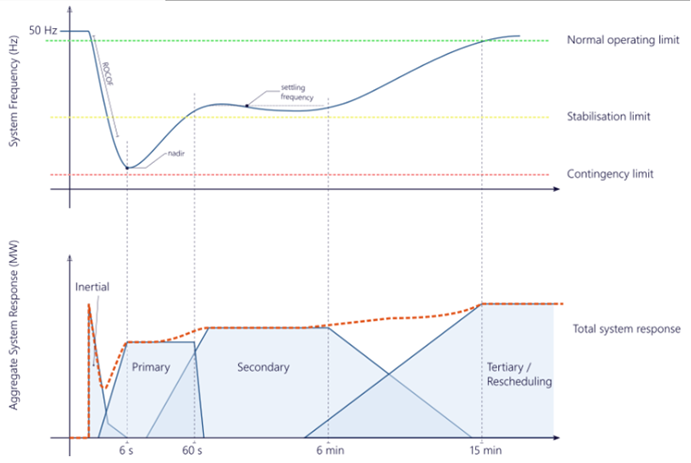 Conventional power systems are naturally heavy thanks to the heavy masses spinning in generators (particularly the large steam turbo-generators found in coal and some gas plants). When the NEM began inertia was abundant, so a mechanism to procure it was not necessary.

However windfarms, solar panels and batteries are not synchronised to the grid with their energy is converted into alternating current via an inverter. As these sources replace conventional spinning units, the power system is getting lighter. 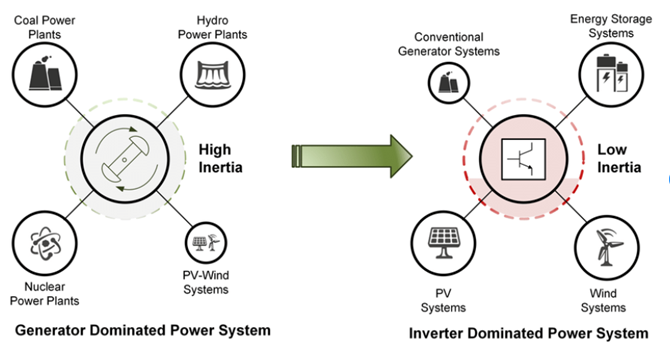 Inertia can also be obtained from synchronous condensers: a generator synchronised to the power system, but without a power station attached. These can be installed by transmission companies, and in South Australia, ElectraNet is presently installing four large ones.

Interesting opportunities also arise from a particular type of battery: grid-forming inverter connected batteries, that can resist changes in frequency in a manner that is close to, although not identical to, a conventional synchronous machine. The Australian Energy Market Operator (AEMO) and other market operators around the world are presently studying how this synthetic source can safely substitute natural inertia.

MarketWise notes that the National Electricity Rules already include a requirement for AEMO to monitor, and if necessary, transmission companies obtain, a minimum secure level of inertia for their NEM region. This can either be from network equipment, e.g. ElectraNet’s synchronous condensers, or from generators. For example, the transmission company may contract with a generator to run at the times when inertia is otherwise insufficient.

MarketWise considers this unsatisfactory for a number of reasons, including that it is only to meet a minimum local security threshold (the “Min threshold” below). A heavier system is not only safer, it can also relieve network congestion and allow AEMO to run the system with less FCAS. These benefits are not valued under the current regulatory arrangements, meaning the dispatch is less efficient. The customer may in fact be better off if some additional inertia is bought on their behalf to permit a more efficient total dispatch.

Figure 3: Substitutability of inertia and FCAS 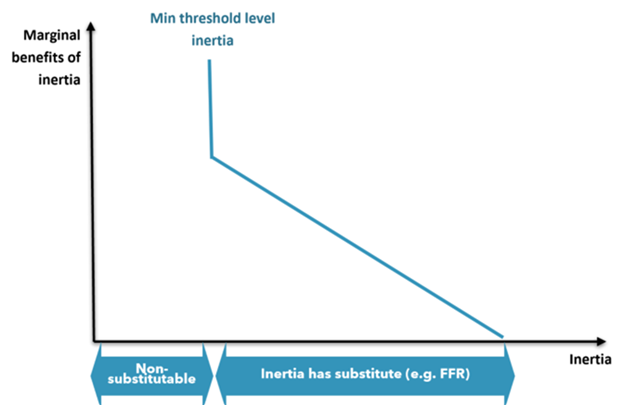 Developing a market to acquire inertia from generators has at least two great challenges:

Arguably, the same challenges apply to many generators participating in the energy market itself. Nevertheless the energy market does overcome them thanks to the interaction between self-commitment, generator rebidding and predispatch forecasts.

After considering four approaches, MarketWise ultimately favoured a real-time spot market and deeply explored a design. Inertia would become a new market ancillary service which is bid in by providers and dispatched by AEMO within the existing dispatch engine. The dispatch engine already understands the interaction between inertia, FCAS, network constraints and energy, so if presented with the ability to simultaneously dispatch all of them, the linear program will co-optimise the lot to get the cheapest total dispatch.

The design requires providers to bid a price for their inertia. For a conventional generator, this will be incorporated within their first (or minimum stable output) bid band. Synchronous condensers will also bid into the dispatch engine at zero energy levels.

In each dispatch interval the minimum threshold level of inertia must be met (as currently required under the regulatory arrangements). Additional inertia above this level may also be dispatched, subject to it being cheaper than alternatives such as fast FCAS and FFR. In line with current energy spot market design, the bid price of the marginal inertia service provider sets the inertia price in each dispatch interval and this price is paid to those inertia providers that the dispatch engine determines as required. Also similar to energy, when there is plenty of inertia available, inertia price may be low. When inertia is scarce, prices are expected to increase.

Inertia requirements are determined as minimum required levels (not target or absolute levels) and there is no penalty for inertia service providers to provide more inertia than required. This means they will not be constrained off when there is plenty of inertia. Inertia providers also do not displace cheaper energy providers in the energy market as the payments for inertia and energy are separate. A joint energy-inertia provider must be competitive in both markets to be dispatched for both energy and inertia provision.

But what about the two challenges described above: the step function and start-up times? MarketWise proposes these should be managed by the owners of the plants themselves, through self-commitment and rebidding. The predispatch will incorporate the inertia ancillary service, and it would become the responsibility of the plants’ traders to commit generators in response to (non-binding) forecast inertia prices, just as they do for the other spot markets.