The new shadow Minister wasted no time putting nuclear energy into the public debate. It created some headlines suggesting it indicated the Opposition was gearing up for a fight with Labor over nuclear. Subsequently, the impression was reinforced by the new National’s leader David Littleproud writing to the new government suggesting the need for a National Energy Summit and that: “Small-scale modular nuclear power should be included in that conversation as a source of reliable energy and a way of reducing the emissions”.

Ted O’Brien previously headed a Parliamentary inquiry into the potential for nuclear and has publicly supported the use of small modular reactors (SMR), while pointing to the importance of gaining community support.

The new Opposition spokesman also indicated he would target Labor over its election promise to reduce power bills. He said his priority was to “keep the lights on and keep people’s electricity bills down” and called on Labor to “stop wasting everyone’s time and pretending they are still in opposition”. In an interview he also argued the case for threatening intervention to address the current gas challenges describing the domestic gas security mechanism (DGSM) introduced by the Coalition Government as a “terrific lever”:

“It gives the Australian Govt the option to intervene… the value of the lever is not just in its practical use but in the threat of its use, the threat of intervention and where you saw from Turnbull onwards the Coalition Govt make use of that trigger mechanism, it is in those commercial negotiations between government and industry that threatens the use of intervention… instead of just taking it off the table…it’s in our interests as a nation – households and businesses – … to put it on the table”.

He has most recently come to notice on energy and climate issues through his work as Chair of the House of Representatives Standing Committee on Environment and Energy (since 2019), and particularly its look at the potential for nuclear power in Australia (more on that below). Ted O’Brien was elected as the member for Fairfax in in 2016, a seat he ran for as the LNP candidate in 2013. In the earlier poll although he received the most primary votes, Clive Palmer eventually won the seat by 53 votes based on preferences.  A full outline of Mr O’Brien’s Parliamentary background is shown in the table at the end of this article.

Prior to entering Federal Parliament, he was involved in the family business, Defiance Mills, before spending more than a decade with consulting firm Accenture, both in Australia and overseas. He was also previously Managing Director of Barton Deakin Qld, a government relations firm and much earlier he was chair of the Australian Republican Movement (2005-2007).

His experience with energy most recently has been through his role as Chair of the House of Representatives Standing Committee on the Environment and Energy where alongside the inquiry into the nuclear potential, he presided over an inquiry into dispatchable energy generation and storage capability, which lapsed when Parliament was dissolved for the most recent Federal election, as well as inquiries to consider crossbench bills on energy and climate policy. The crossbench bills were Zali Steggall’s Climate Change (National Framework for Adaptation and Mitigation) Bill 2020 and the related Climate Change (National Framework for Adaptation and Mitigation) (Consequential and Transitional Provisions) Bill 2020 and separate bills to establish an Australian Local Power Agency (ALPA).

This has been a major area of advocacy. The Standing Committee on the Environment and Energy’s report ‘Not without your approval: a way forward for nuclear technology in Australia’ recommended that nuclear power be considered as part of Australia’s future energy mix was presented to Parliament in February 2020. In presenting the Report Ted O’Brien said: “To be clear, we are not recommending that Australia races ahead and adopts nuclear energy: rather, that this zero-emissions baseload technology that accounts for around 11 per cent of the world’s electricity generation be put on the table for fair consideration as part of our future energy mix post-2030”.

The Committee report recommended economic, technological and readiness assessments be undertaken and an engagement program with the public “recognising the importance of a social licence” and finally a partial and conditional lifting of the existing moratorium. This was based on keeping the moratorium for older nuclear technology but allowing new and emerging technologies such as small modular reactors (SMRs) – “Australia should say a definite no to the old nuclear technologies, but a conditional yes to the new and emerging technologies”.

Ted O’Brien has recognised that aside from technological, legal and financial hurdles one of the biggest obstacles to nuclear will be the need to gain community support: “a social licence is the number one prerequisite,” he said this week.

It is an area that the Opposition and its key spokesperson will likely continue to argue needs consideration and see as a point of differentiation with the Government. The hurdles will remain significant; new technologies such as SMRs are yet to establish themselves on a commercial scale or demonstrate they can be cost competitive. There is also a need to establish the broad skill base to manage a nuclear industry, something that is unlikely to happen in a short timeframe. While the ban on nuclear could be lifted it is unlikely to lead to nuclear being developed locally.  If the technical, commercial, cost and community support challenges can be overcome there would still need to be a political consensus reached and it will still face a challenge: the time all this might take raises the very real risk it will be overtaken by other technologies in the transition to lower emissions. As noted by political commentator Paul Kelly: “Putting nuclear on the table for debate offers a deft Coalition political stance provided it doesn’t really believe nuclear will meet the affordability test.”

This inquiry was curtailed by the recent Federal election, but as Committee chair, Ted O’Brien said it would not just be about how the system currently works, “but how it might work in the future… we’re at a turning point in how our electricity market operates and how we respond will be a major determinant of our strength as a nation well into the future. We have to get it right.”

The Committee recommended that the bills not be passed. In his foreword to its final report Ted O’Brien flagged issues with the CCC steering formal policy decisions away from Parliament and the Executive. “No matter how difficult it is to meet the substantive and political challenges of climate change, we parliamentarians cannot shirk our responsibility to determine the national response. What’s more, the Australian people should not be stripped of their right to choose between alternative policy positions at the ballot box.”

The Chair argued that the CCC would replicate the work of the Climate Change Authority while the bills would create “additional and potentially inappropriate reporting burdens on other Commonwealth agencies”.

On the legislated target, the Chair wrote introducing it without addressing the question of how it is achieved “would give rise to a series of risks including adverse impacts on the economy, specific sectors and jobs”.

The foreword also acknowledges that a lack of consensus on climate policy could lead to frustrations, “for example, despite great strides being made and targets being exceeded, there remains a chorus of critics talking down achievements and demanding more”. 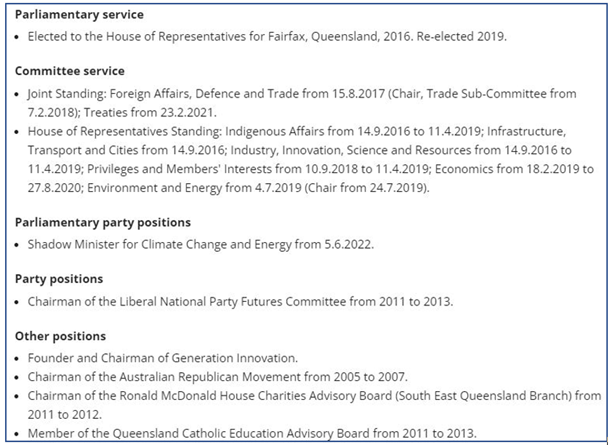