The unveiling of the Federal Government’s new legislation to clarify offshore energy developments was greeted with suggestions it would prompt a rush of offshore wind farms around our coastline.

On cue, the day after the Offshore Electricity Infrastructure Bill 2021 was introduced, Australis Energy went public with plans for a 600MW wind farm with up to 75 turbines about 10km off the South Australian coast near Kingston. Project developers have lodged a development application with the SA State Planning Commission and it joins a list of more than a dozen possible projects highlighted in a recent report on the potential of offshore wind in Australia and shown in table 1. 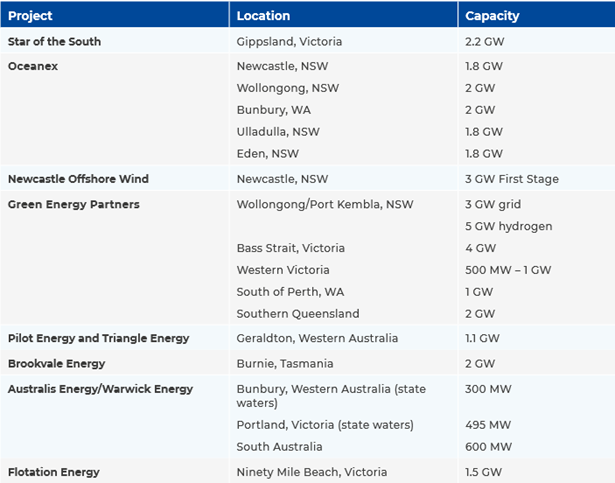 Offshore wind farms typically take 6-10 years to develop and build. Currently many of these projects are in pre-feasibility stage. The 2.2GW Star of the South project proposed off the Gippsland coast is the most advanced. It is still in feasibility phase and undertaking site investigations and monitoring of conditions. The project has the backing of local investors and the Copenhagen Infrastructure Partners (CIP) and expects that if the project is feasible and gains the necessary approvals work could construction work could begin in the middle of this decade and the first electricity delivered at the end of the decade.

The Federal Government’s Bill puts a regulatory framework in place for the construction, installation, commissioning, operation, maintenance and decommissioning of projects in Commonwealth offshore area. The Commonwealth offshore area is the waters three nautical miles (around 5.5km) offshore to the outer edge of Australia’s Exclusive Economic Zone (roughly 200 nautical miles).

According to the Offshore Wind Energy in Australia report, the “technically-accessible resource” is estimated to be 2233GW. Technically accessible refers to areas less than 100km offshore in water depths less than 1000 metres and within 100km of substations and onshore transmission lines and excluding environmentally restricted areas.

That report also pointed to the lack of a federal regulatory framework for offshore renewables hindering development, so the recently released Bill helps address that.

Under this framework, offshore infrastructure activities must be done in a way that does not adversely impinge on existing marine users. This Bill ensures co-users are consulted ahead of any construction. Projects will only proceed if impacts can be appropriately managed.

Offshore wind has tended to be developed in countries and regions where there is less opportunity onshore – either because of the wind resource, availability of land, or factors like population density.  Key regions for offshore wind have been the UK, Europe with The Netherlands leading the way, South Korea, and Japan. The graph below highlights recent developments in the UK and Europe. 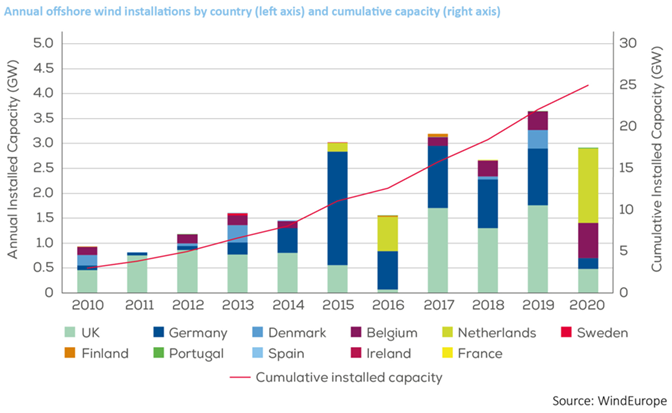 Offshore wind farms are also more efficient with more wind resources, although this is countered by their increased cost to develop and maintain them.

Offshore wind gross capacity factors greater than 80 per cent (excluding losses) are claimed for waters south of Tasmania, although these are in deeper waters, likely to be more challenging and are a long way from demand centres.  In more accessible areas, such as Bass Strait and Western Australia’s coast and north Queensland “theoretical” offshore capacity factors of more than 55 per cent are widespread, according to Blue Economy Co-operative Research Centre. While South Australia and New South Wales have capacity factors of more than 45 per cent.

The capacity factors for offshore wind farm sites in Australia are claimed to be 10-15 per cent higher than for onshore wind and by more than 25 per cent in some areas (see figure 2).

The capacity factors for offshore wind farm sites studied in the Offshore Wind Energy in Australia report (which were those close to substations at 25, 50 and 100km offshore and in waters less than 1000m deep) are shown in the table below. 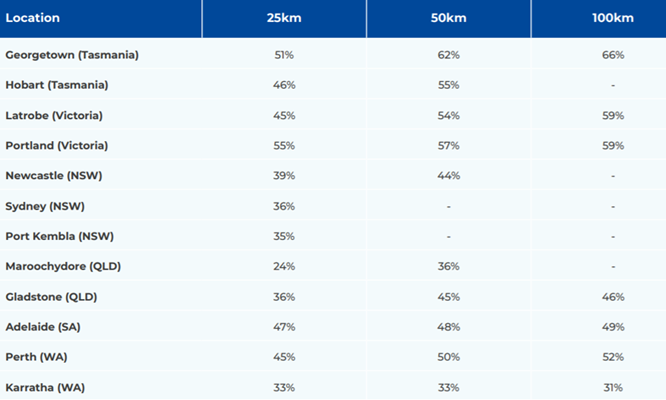 Offshore wind farms can also have larger turbines – it’s easier to install when they won’t impact neighbouring land use. Offshore turbines average 7.5MW compared to an onshore average of 3MW. The biggest offshore turbine currently available is the massive 12-14MW Haliade-X which has a 220 meter rotor.

It’s argued that offshore wind farms could help diversify supply to the grid by being available at times when solar and onshore wind are not. The Blue Economy study looked at offshore wind resources hourly against grid load in Western Australia, South Australia, Victoria, Tasmania, New South Wales and Queensland and against other renewable generation onshore.  Most sites showed strong diversification from onshore renewable generation. But there is a big caveat to this assessment because the offshore and onshore wind resource data was not based on in-situ observations but taken from “coarse resolution global scale meteorological reanalysis”.

The correlation of offshore wind with onshore wind sites estimated in the study is shown below. 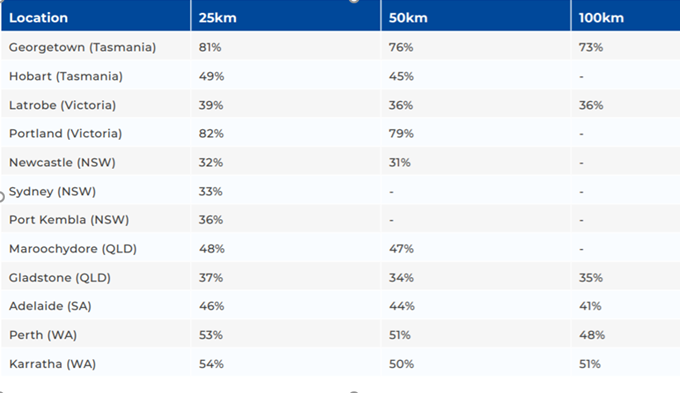 Show me the money

In shallower waters wind turbines can be fixed to the seabed and internationally commercial wind farms are almost exclusively fixed foundation.  The capacity of offshore wind farms with foundations in the seabed has nearly doubled in the past four years (19GW to 35GW), and amortised costs have dropped from $120/MWh to $80/MWh. They are best suited to waters no deeper than 60 metres, while an estimated 80 per cent of offshore wind blows over deeper waters.

For deeper waters they can be put on floating platforms, which have been commercialised over the past decade. Four systems have emerged – semisubmersible, sparbuoy, tension leg platform, and barge. 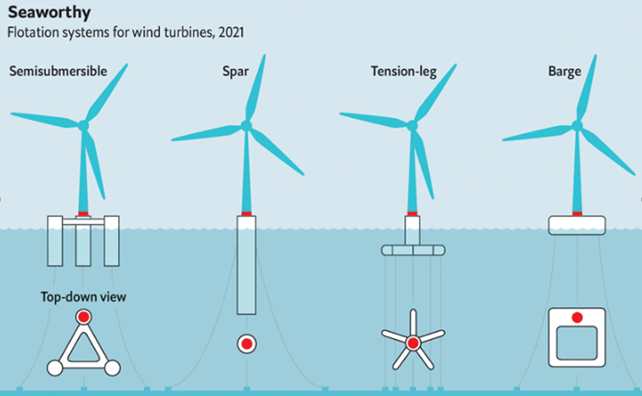 In July Shell and Scottish Power, which is part of Iberdrola, submitted proposals to build a large-scale floating wind farm off the Scottish coast.

One challenge highlighted by the Floating Wind Joint Industry Project[i] (FWJIP) for floating wind farms with larger turbines is maintenance and servicing which can not only be technically challenging but can come with a price tag.

Approaches being looked at include climbing cranes, and vessels that can counter the effect of swell with motion-compensation software, but the ships are estimated to cost $250million.[ii]

So work is underway on the best way to manage offshore floating wind farms and larger turbines.

[i] A collaborative R&D initiative between the Carbon Trust and 17 leading international offshore wind developers, created to overcome the challenges and investigate the opportunities of developing commercial-scale floating wind farms.